Freight forwarding is as broken as integrated are the warehousing and the delivery in India.
Next Article Add to Queue

At the receiving end of the problem of unstructured freight forwarding market are the millions of international exporters and importers. In between, however, there is a market to breakout that would boost the country’s trade logistics.

Infrequent shippers (exporters/importers) might perceive a freight forwarder and a logistics company through the same lens, but the two are different. Unlike latter, a forwarder partners with various logistics companies so that shippers can have better and wider pricing options. They are essentially the middlemen/vendors who organize shipments on behalf of the shippers to offer services viz., managing shipping and documents for export/import, warehousing, cargo space, negotiating freight charges, cargo consolidation, and filing of insurance claims etc.

For decades, nonetheless, forwarders have existed in silos for small shippers. The gap is in the way latter has been procuring freight prices and managing shipments. The exporter usually contacts five to six forwarders for shipping quotes and picks one based on the best price and the transit time offered. However, the pricing is neither standardized nor all-inclusive. Apart from the freight cost, there are documentation charges, handling fees, local pick up cost etc. that varies from one agent to another. Often these costs are not included in the quote.

“Charges such as the terminal handling fee at Mumbai’s Jawaharlal Nehru Port, which is almost Rs 10,000, are mentioned as ‘other local charges as per actuals’. So, in case I am shipping to Europe and the freight rate is Rs 40k-50k then ‘other charges’ of around Rs 20k are a fair percentage of the total amount. So the price transparency is not there,” says Samir Lambay, Co-founder and Chief Executive Officer, FreightCrate Technologies. FreightCrate is among the bunch of digital marketplaces (like Airbnb for property owners or UrbanClap for home services) offering freight forwarding services by aggregating different forwarders on the platform for a better price discovery. They aggregate quotes from registered forwarders through a standardized rate system that checks for ‘other charges’ as well before sharing a final quote with the customer.

Gagan Goyal ran a robotics and science learning company and exited in 2015 to join early stage fund India Quotient in 2017. Goyal used to import materials from China and export to Dubai and other countries. The challenges he came across in shipment later led him to invest in Mumbai-based GoComet – another forwarding marketplace. “I always relied on the agents and never got to know about the ongoing freight rate. Apart from shipment charges, there were a lot of hidden charges.” GoComet focuses on large shippers as a growth hack to bring existing forwarders on its platform. The problem, however, was same – opaque pricing.

“For our existing customers, we help them save eight per cent on their annual freight cost via automated commodity negotiation on the platform. They do over 90 per cent of their shipments through us,” says Gautam Prem Jain, Co-founder and Chief Executive Officer, GoComet. The start-up has seen maximum adoption from pharma and chemicals industries. 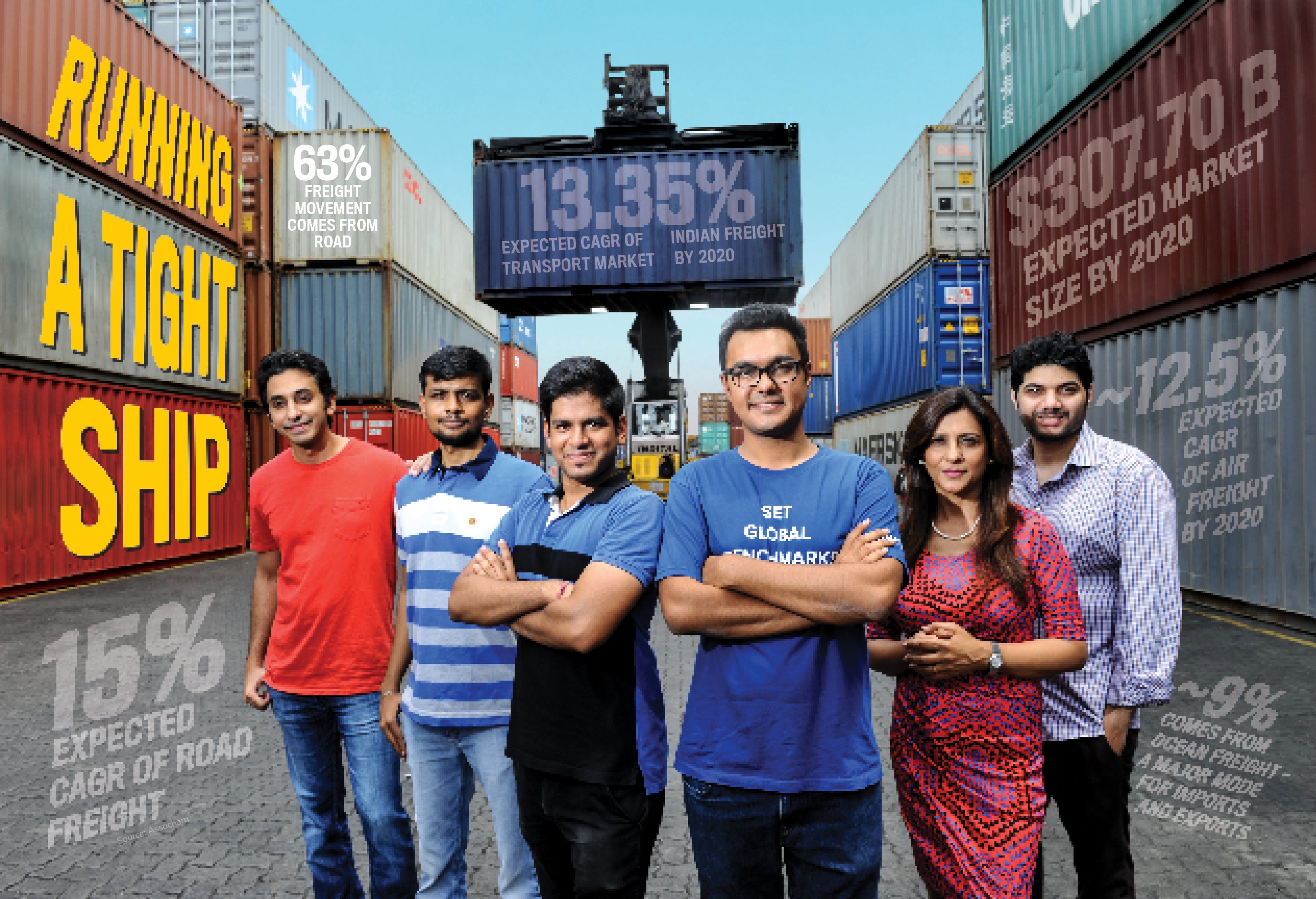 Ocean freight shipment is the biggest of the existing opportunities, including air, rail, and road. India Brand Equity Foundation – the market information provider says that around 95 per cent of India’s trading volume and 70 per cent by value comes from the maritime channel. The tremendous scope nonetheless is met with tremendous challenges.

A report by government’s policy think tank NITI Aayog and advisory firm Dun & Bradstreet in February this year categorically listed “port congestion, delays in customs clearance, delays in regulatory clearance and documentation and paperwork constitutes around 80 per cent of the overall reasons for detention and demurrage charges.”

Currently, it takes up to 10 days for documentation and regulatory part to sort out for imports or exports.

“The opportunity is higher in the ocean and air shipments where a single player can scale and acquire market share. You need to build a large network globally with multiple offices. Forwarding process, however, hasn’t evolved in several years but with instantaneous freight discovery and procurement through these start-ups, today, you are not dependent on multiple physical stakeholders to give you inputs. The market has been ripe for disruption from a long time,” says Prahlad Tanwar, Executive Director - Transport & Logistics, KPMG India.

Firstly, from the forwarder's perspective, the conventional route has been time-consuming and mentally straining. In a typical scenario, a sales executive at a forwarding company begins with confirming the charges for the services from the pricing team. The team, further, scrolls through the prices mentioned by hundreds of vendors and based on the shipper requirements passes on few options to the sales executive. He then adds his margin and quotes the final amount along with different options to the customer. Much like any B2B channel, here too, negotiations between the shipper and the forwarder go back and forth. However, through their proprietary algorithm, digital forwarding platforms can perform data analytics for price automation. The time taken for the process, which conventionally relies on calls and emails, shrinks from around 48 hours to less than five minutes.

“Through a MakeMyTrip-like plug-and-play portal, the user just needs to punch in the origin and destination ports to get the rates. Following this, the pricing team needs to upload the user requirements and accordingly, the proprietary algorithm automates the data,” says Raghavendran Viswanathan, Founder and Chief Executive Officer, FreightBro. Including FreightBro, all marketplaces offer live tracking of shipments via email and/or single dashboard screen.

Secondly, most of the exporters and the importers in India work on credit. They have access to credit from their forwarder. In India, however, there is not enough data on how well a small exporter pays back. Even if it does, there are often issues of delayed payments. Hence the rotation of capital here is quite important. The government thankfully, in November 2017, granted infrastructure status to the logistics sector that allows businesses to access cheaper credit and boost competitiveness among the exporters in the global market.

“Credit is quite tricky, as sometimes, several shippers expect upwards of 30-day credit. So how would you manage your working capital and cash? Therefore, you need to educate and collaborate with logistics companies that they will also benefit with better margins,” adds Tanwar. Nonetheless, a 30-day credit with a delay of five to 10 days can be worked out but the problem comes in bad debts. “You need to be diligent in your credit assessment of the shippers. Start by giving Rs 5 lac, for instance, if he pays you back then you can further extend the credit,” states Lambay. The marketplace start-ups have been in existence for only about one-two years; hence the adoption among its customers will take its own time to swing faster.

The fragmentation is not just in terms of business practices but also in terms of user behavior. Thousands of small exporters make up for the pretty modest volume being shipped every year and since last many decades, they have built relationships with the conventional forwarders that serve their purpose. In such scenarios, incentives too might not work the way they have for other sectors like e-retail, cab booking, ticketing, payments etc. The strategy similar to Ola - incentivizing its users if they invite people to download the app - is not that straightforward here.

“Incentives are misaligned because of high corruption in the market. Logistics managers are given massive kickbacks to route businesses through specific forwarders,” says Bhavik Chinai, Founder and Chief Executive Officer, Vamaship – the marketplace that also does e-commerce logistics apart from the ocean and air shipments. Chinai tried incentivizing shippers in tier II and III cities through experiments like one-time sign-up bonus but it didn’t quite work. Shippers and forwarders might even understand the benefits of moving to a technology platform in terms of time, money, better growth and optimized resource management, but they may not yield to it. Hence, the resistance to change is strong.

8 Logistics Tricks To Be Competitive

Shifting Home During COVID Times? Here's What You Should Know

The challenges for eLogistics that 2020 left in LATAM