Despite its name, most people would agree that social media is anti-social at its best- that's what the entrepreneurs behind technology startup Calio refer to as the "social paradox."
Next Article Add to Queue

Despite its name, most people would agree that social media is anti-social at its best- that’s what the entrepreneurs behind technology startup Calio refer to as the “social paradox,” with co-founder Latif Baluch saying that though such technology was built to bring people closer, it’s actually taking us further away from each other.

“People spend a huge amount [of time] on social media, connecting with their friends, but they can’t get through a dinner without being on their phones,” says Baluch, who noted this to be an issue he was facing with his own best friend, Ramy Al Kadhi. “Despite being best friends, we struggled to actually see each other,” remembers Baluch. “Working in quite intense sectors, we quickly learnt the importance of a well-organized work calendar- unfortunately, this didn’t translate to our personal lives.” This ultimately became the catalyst that got him and Al Kadhi to start their enterprise, Calio, an events platform and calendar app, in October 2017.

While researching on the technologies around social activities and events, Baluch and Al Kadhi soon realized that though millions of people use calendars every day, most of which were quite functional, these were still perceived as being too “corporate” or formal, and not much fun to use for one’s personal needs. This led to the conceptualization and creation of Calio- a calendar app that’s more personal, more social, and also connects you with communities and businesses of choice around you.

While Baluch left a cushy corporate position at Bank of America Merrill Lynch to teach himself to design and code before starting Calio, Al Kadhi came to the enterprise with five years of experience of digital advertising at Omnicom Media Group, as well as an entrepreneurial venture of his own. The enterprising duo launched Calio on the iOS platform first, and then on Android shortly after, with the app aiming to help users connect with family and friends, share and schedule events, create reminders, and more. The app also has a feature enabling you to follow your favorite local businesses (a.k.a “hosts”) to discover events, and get them added straight to the calendar- events get their own chat interfaces too. Not just that, Calio also syncs with other conventional calendar tech platforms such as Gmail, Outlook, etc., and social platforms like Facebook as well.

Baluch says that while Calio has been generating revenue, it hasn’t made a profit as yet- but that’s something the founders don’t seem to be too worried about, given their game-plan for the venture. “Many startups immediately focus their attention on growth; all our resources are [currently] focused on developing an incredible product, and building a community,” Baluch explains. Though the product is in its early stages, the entrepreneur is quite clear of its evolution. “Once Calio is mature, it will essentially be a marketplace between users and businesses,” he predicts. “For users, we’ll have a freemium model, subscribing to premium for additional calendar features; from businesses, we’ll generate revenue by allowing them to sell tickets, and advertise certain events on our platform. We’re also building smart integrations and white label solutions.”

Cognizant of the fact that apps and app-based businesses are, often, on a standalone basis, very difficult to monetize at a large scale, Baluch firmly believes that it is the utility of the underlying service that often determines success of an app. As for how this applies to Calio, Al Kadhi says that the digital explosion around us has created an undeniable need for a tool that allows people to be more productive and do more with their time. He adds that the acquisition of electronic calendar service Sunrise by Microsoft in 2015 (and its subsequent merger with the larger Microsoft Outlook enterprise) convinced the Calio team that there was an obvious market demand for a more personal calendar service, that was strong on design. “Lastly, we’re noticing an obvious trend toward aggregation; [for instance] Twitter for News, Medium for Blogs, Instagram for Photos, and [similarly, it can be] Calio for events and bookings,” Al Kadhi says.

Baluch adds, “Calendars on your smartphone are quite basic and the technology has not really evolved in the last 10 years. There are alternative calendar apps that have nice UI, but don’t really have their own robust infrastructure; they use your Google or Outlook calendar data.” And the fact that Calio is building such a calendar technology from scratch is an aspect Baluch counts among its differentiators. Established in London as its headquarters, Calio may not be a MENA startup in the strictest sense of the term, but besides the founders’ own origins, the app reports to have roughly 1,500 MENA-based users (at the time of writing) without any paid marketing initiatives. “Apple featured us across the Middle East in March [2018], highlighting our ability to sync all your calendars in one place,” says Al Kadhi.

“Given the startup ecosystem, we decided to set up HQ in London. Once we raise seed funds, we will hire some full-time employees in Dubai. In Dubai, our focus will be to organize and sponsor a lot of events, predominantly supporting the art and wellness communities. We will kick off with a big Calio art exhibition when the weather cools down.” Baluch cites London’s support system, funding initiatives and access to talent as key reasons Calio decided to set up base in the city, before opening up in Dubai. As for the MENA’s entrepreneurship ecosystem, Baluch says that it’s “heading in the right direction, but it’s still very young, and frankly, quite far behind other regions.” Baluch believes that in order to improve the mindset and attitude towards tech startups, the region “needs to change from all parties involved- founders, investors, and society as a whole, [and] recent exits like Souq.com and Talabat have certainly helped catalyze this.” 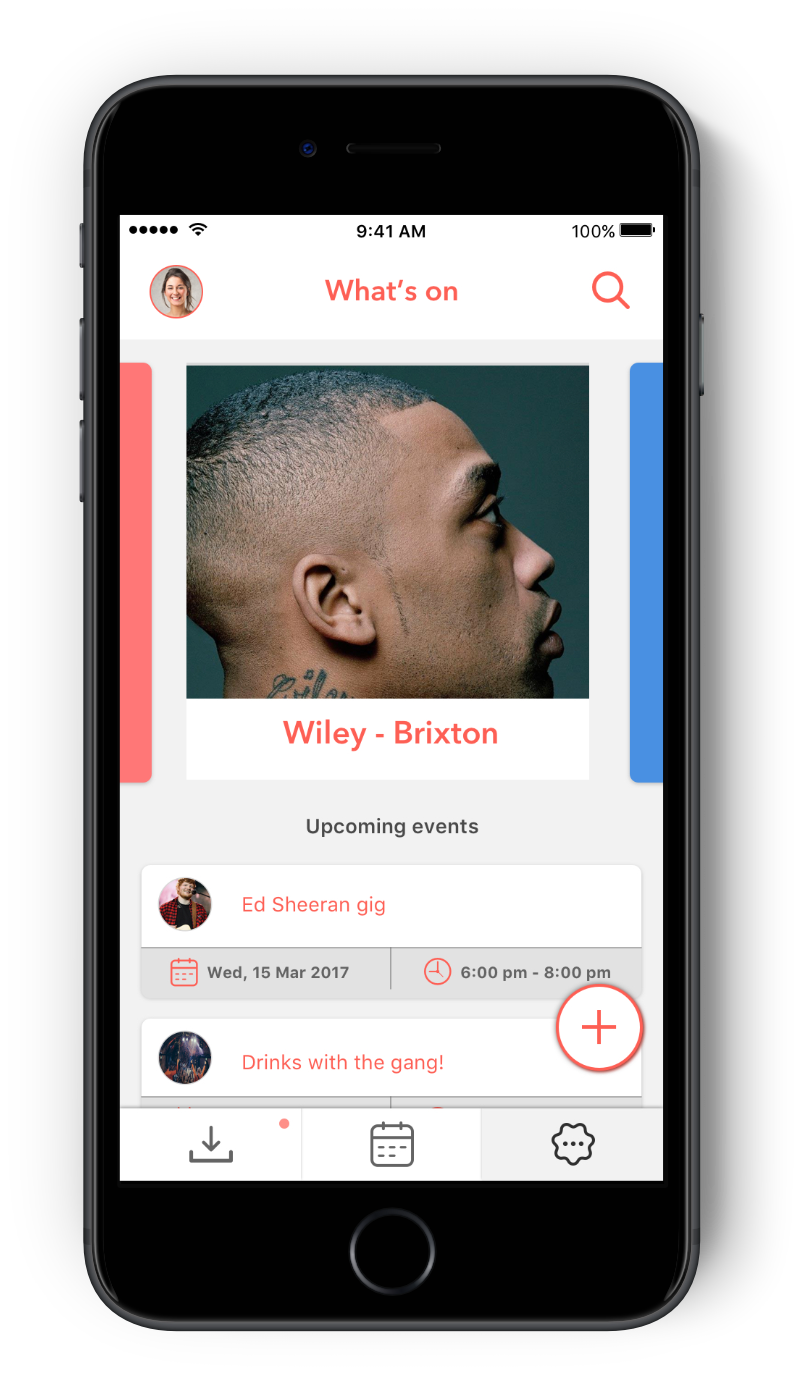 Al Kadhi feels that talent could be another factor slowing the progress for the region. “Being a relatively young market, there is a smaller pool of highly skilled talent to hire from. In a world where tech is so important, there just aren’t many worldclass designers or developers in the MENA. Then, once your product is ready, you need people who have experience in scaling a business. In the region, there are just less people who have done it. The shorter-term solution to attract from abroad, but as a startup, this can be really difficult given the visa process.”

As the mobile apps market (and especially social platforms) experiences exploding growth, the creators of Calio are well aware that their product has its work cut out to stand out in such a crowded space. “[A] core difference between us and other events or social apps is our calendar focus,” Baluch says. “A good calendar is useful on a standalone basis (i.e. without friends or access to events).” The second differentiation he notes is their business model itself. “We’re building the tools for businesses to integrate with Calio, create their own content and engage with their users. This is more scalable.” He also realizes that the biggest issue most app businesses face is that of user retention, but remains confident that users would stick and return to the Calio platform with continuous usage. And the other thing that seems to be moving in a positive trend for Calio is the adoption of its product. “We’re constantly speaking to users, and doing focus groups to get feedback,” says Baluch. “Data-wise, we focus on real engagement, which is a user actually creating an event, joining an event, or connecting with a business account. Looking at our May cohort [data], 66% of new users were engaged.”

Rated 4.7 on Apple’s App Store (“without prompting people to rate”), a look through Calio’s reviews on both the iOS and Android store can give you a feel of the satisfaction levels when it comes to the user experience, convenience, and utility of the product. While it is a venture born out of sleepless nights, a lot of hustling, and almost all of the financial savings of the entrepreneurial duo, Calio has also managed to secure angel investment of £135,000 (approx. US$177,000) from undisclosed investors, and though the amount may not be a lot in the space in which they operate, the founders say they are quite happy with how far they’ve come since their launch. However, like all entrepreneurs who are steadfast in their goals, the founders of Calio too have a clear idea of the key challenges the business needs to adapt to, in order to scale.

Baluch believes that tackling social behavior is likely to be a key issue to tackle for Calio to grow. “Calendars are generally seen as a work or corporate tool, and most people spend their time on their phones scrolling through social media or on messaging apps. We’re tackling this through product design and branding- building something that’s familiar enough it’s easy to use, but with unique enough features that give that ‘wow’ factor,” he says. On the other hand, Al Kadhi is keen on ensuring the quality of events that’s hosted or promoted on Calio. “We’re being selective on which businesses can create accounts on Calio. We need to be wary not to be short-sighted when allowing businesses onto the platform; often a difficult choice when revenue comes into play,” notes a pragmatic Al Kadhi. The startup may have a tough road ahead- but Al Kadhi and Baluch are sure Calio can get through it all the same. All the best to the entrepreneurs!

What are your top three tips for an entrepreneur to start a business?

1. Find role models “In my time at Omnicom, I was lucky to meet Elie Khouri, CEO of the company. Throughout my time, he had an open-door policy, and always encouraged me to explore my ideas, and harness my entrepreneurial spirit.”

2. Get rid of your ego “You can’t really run a business with a big ego, as you need to tough it out, and learn to know when you’re wrong. The startup life is not as glamorous as it might seem!”

3. Just start “If you have an idea, just get going; ask for that meeting, design that first app page, or write down the business plan. Motion leads to momentum!”

How Your Small Business Can Take Down Goliath

How Startup Entrepreneurship Will Change Post-Covid-19

5G: How it will be used in the education of the future

The Colombian startup that educates non-digital natives through WhatsApp