Dubai-based enterprise Hey Music is by no means the first company dabbling in the data transfer space, and the startup is well aware of the presence of more established global competition (think WeTransfer, for instance) for their latest file storage, transfer and management product, Hey Ants. Having said that, the company decided to immerse itself into its Hey Ants product (a reference to what a colony of ants can achieve together), as it believes that there is enough room in the marketplace for another “safe and secure file transfer service.” Moreover, the fact that Hey Ants is available in Arabic makes the company confident of significant adoption in the region, and perceives this localization as its unique selling point.

Co-founded and owned by two private, hands-on entrepreneurs -an Emirati educated in the UK, and a European entrepreneur (both of whom have chosen to remain anonymous)- Hey Music is supported by a team consisting of a number of developers across web, iOS and Android platforms, and a marketing team. “Age-wise we range from 21 to 56 years old and we’re truly international, with team members coming from UAE, UK, Lebanon, Jordan, Syria, Egypt, Netherlands, Pakistan, India and Australia,” notes Darren Haynes, Marketing Director, Hey Music.

Offering the product in a freemium model, users can transfer files (up to 2GB for free) including such PDF documents, photographs, videos and music, whilst on the move from both mobile and desktop. The service also offers users the option of sending a password protected email or URL link, as well as the ability to set a one-hour, one day or seven-day file download period. Accordingly, Hey Ants users will also receive a notification of when the file was sent, and when the recipient downloaded it. Users can also upgrade to the premium Hey Ants Black service for US$9.99 per month, which includes a generous 100GB limit, added password protection features, and customizable link expiry date to a 14-day download period. 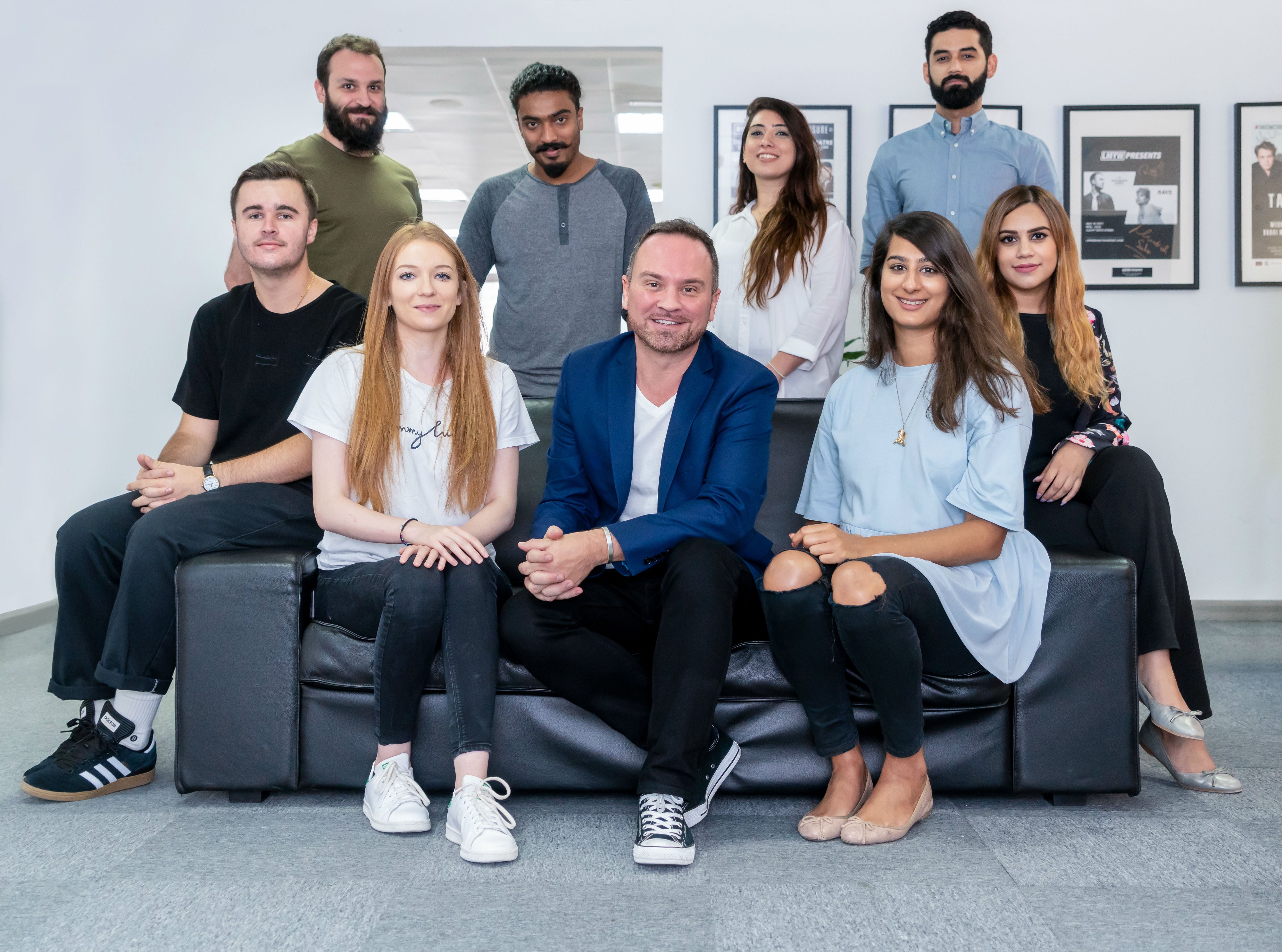 Hey Ants is part of a larger project by Hey Music that’s scheduled to launch later this year. Hey Music intends to structure itself as a global music, technology and social ecosystem “satisfying the creative and commercial needs of musicians, singer-song writers and music producers.” Further, thanks to the team’s history and contacts in the music industry, they discovered that there was a “real opportunity to be part of the empowerment process for creators,” and in enabling their desire for collaboration.

“It became apparent that someone writing songs in London could co-write with someone in New York, the song could be recorded by a different artist in another city, anywhere in the world, but then sending the demos or music stems to producers became problematic because the files were too large for conventional email. And that’s why we built and launched our file transfer service- Hey Ants,” says Haynes. “We hadn’t truly thought about other sectors but now we’re finding that photographers, visual artists, graphic designers and other creatives are also using Hey Ants to move over-sized files."

While it’s most certainly still early days for the startup, Haynes says they are well over their “initial [business] target by around 23%,” and the feedback that they’ve received has also been positive. “That said, we’re still listening to our various audience sectors and we will be rolling out extended features very soon. I think it’s feasible for Hey Ants to continue to evolve on a global scale and compete with other file transfer services that have been around for longer. The introduction of Hey Ants in Hindi should also see scalable growth for sure,” he adds.

Of course, there also seems likely gains for the company on the traction front in their home market of MENA, with an Arabic version. “The [technology] sector is definitely growing and we have seen some huge consumer product success stories around us such as Anghami and Careem, to name just two. Of course, these things take time but the saddest aspect of time versus entrepreneurship is that one can defeat the other,” notes Haynes. 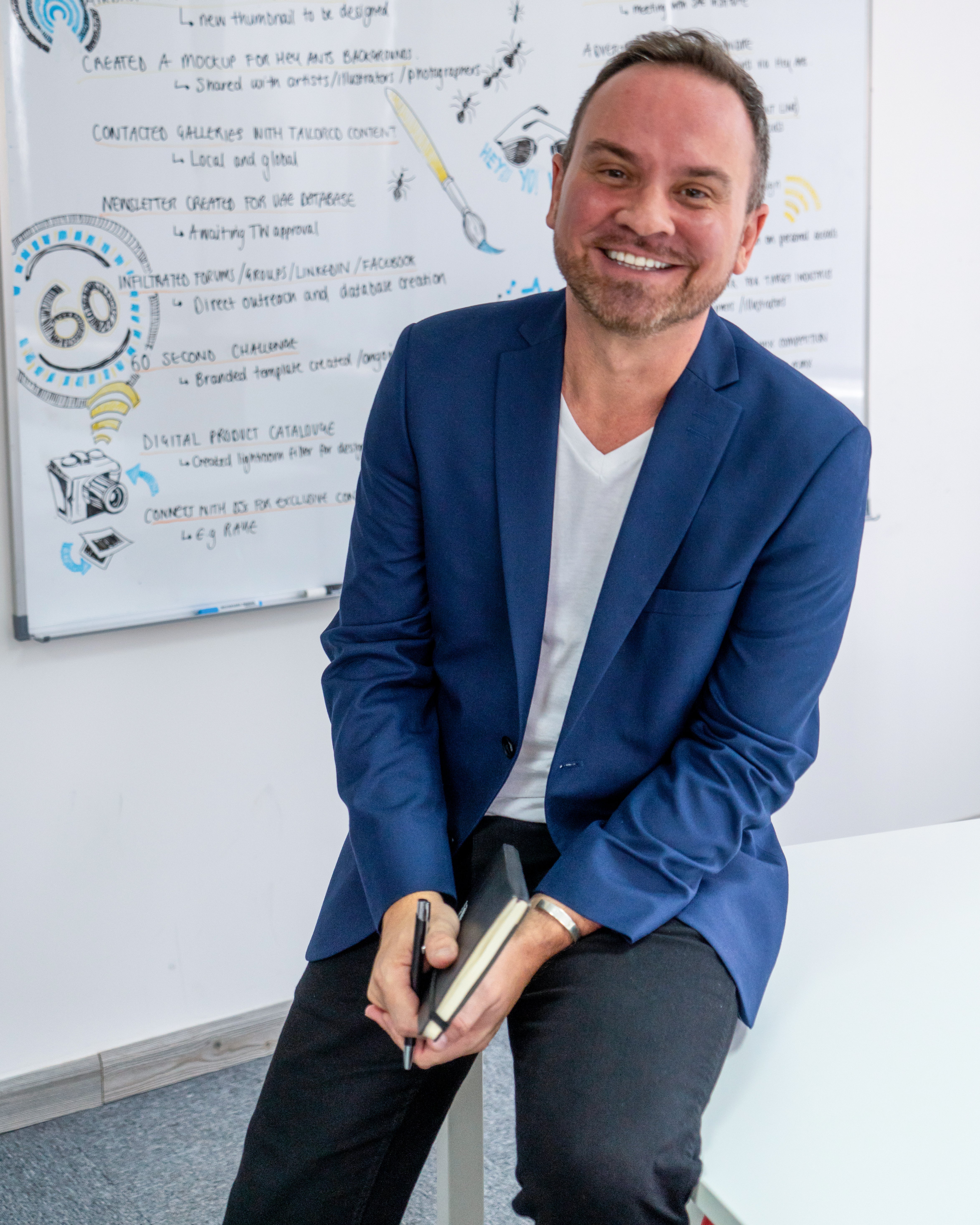 Tell us about how you have been financing the growth of the company till date.

“Hey Music and Hey Ants is entirely funded by our two founders, and this has been no small financial project for them. Hey Ants has been bootstrapped from inception, and as of today remains as such. We’re just into our first funding round and we’re hoping to close that in the coming weeks. It’s a raise of US$3 million. This investment will be used for marketing to increase our user base as well as expanding the team and the tech.”

What’s the service’s adoption been like in the Middle East? Is the business and team based in the UK or UAE?

“Pick up in the Middle East has been really encouraging. As you’d expect, it’s most popular in the UAE because we’re based here and our local outreach campaign has yielded good results. Hey Ants is available in Arabic too, so we’re expecting significant service adoption in the wider region. Hey Music was born in Dubai and 90% of the team is based here. We’re really proud of our Middle Eastern roots and just like the UAE, our team represents a melting pot of cultures. Our diverse team include Emirati, Lebanese, Jordanian, Syrian, Egyptian, alongside British, Dutch, Pakistani, Indian and an Australian. Such a diverse team generates great ideas as well as a unique cultural understanding. We’ve also just [at the time of writing] set up a UK office, which is set to grow further in the coming months. The UK office includes two of our UAE-based staff, who have made the move to London especially for the Hey Music project.”

Why Business Lawyers Are a Necessary Expense