Bringing The Future of DevOps to the Indian IT Industry

With DevOps, the idea is to bring in the future of automation and artificial intelligence for better work processes and organizational changes

In the ever-changing world of technology, the need to be agile is crucial. Businesses are innovating at a fast pace to keep up with the demands of their consumers. In times of such rapid innovation, the need to have successful and speedy software development is of primary importance. And here’s where DevOps comes into the picture.

DevOps brings together software development and software operation for faster processes; it prioritises the organizational changes required for the same.

Bringing together the best of the names in DevOps from across the world was the DevOps India Summit 2018 – India’s biggest DevOps conference. The conference set the tone for the future of DevOps in India. The summit was held on September 1, 2018 at the Marriott Hotel, Whitefield, Bengaluru and saw participation from around 500 professionals including corporate leaders from across the country.

Setting the Stage For the Future

With DevOps, the idea is to bring in the future of automation and artificial intelligence for better work processes and organizational changes. The summit too worked on the same with experts sharing their valuable insights on all phases of IT transformation. The main objective of the event was to create a platform where people can interact and learn from each other and thrive within today’s software-driven economy.

Experts gave a sneak peek into DevOps adoption in India and the increase in the possibility of success of those initiatives and technical practices which will further help organizations attain the highest levels of performance.

The world class summit was organized by Xellentro in partnership with DevOps Institute, Crevise Technology, Confinity Consulting, GitLab, Datamato, Sumologic, Zoomcar, MongoDBand PEOPLECERT. Participants of the event got an opportunity to connect with the industry pioneers and learn more about the emerging DevOps practices which they can apply in their own organization.

Mukta Aphale, Founder & CEO at Crevise Technologies explained that the need of DevOps is to change the way software is built and delivered. Aphale added that today a considerable amount of automation is done to achieve certain goals, but this will go to an unprecedented level in the future with a lot of AI in DevOps. There is a need of doing more automation since the future of automation will invite AI, machine learning, robotic process automation. “Say about in 5 years from now, imagine a world where you may not need a Devops engineer to build automation, as the automation will be self-learning. From DecSecOps, RPA, Serverless and Microservices in the near future we will unfold to rock solid AI-Ops.So clearly, there is a lot of thing which can be done in DevOps space through Artificial Intelligence,” said Aphale.

Insightful Sessions for All 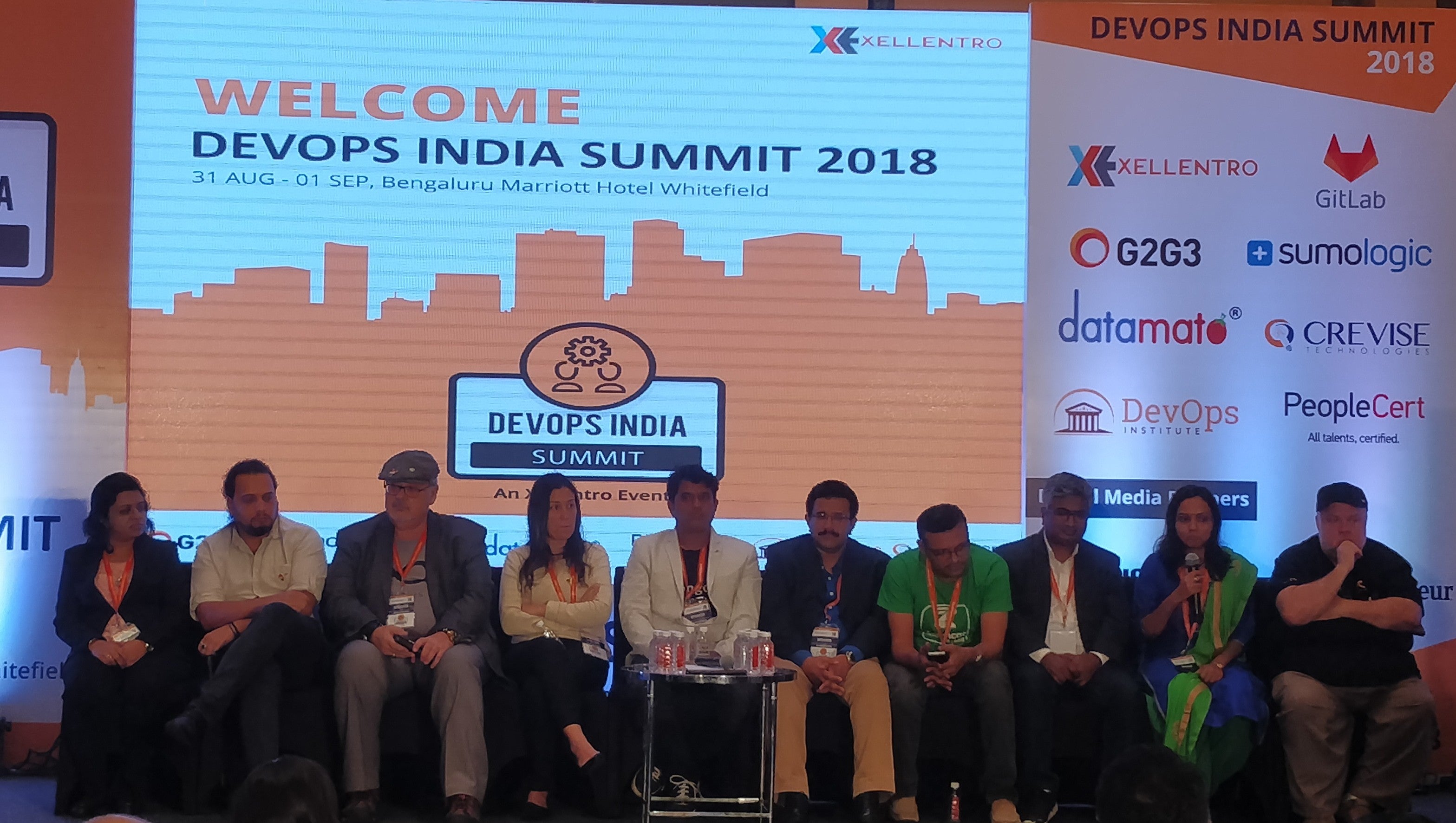 Speakers at the Panel Discussion

The summit saw experts from across the world share their knowledge, talking about the importance of proper implementation of DevOps. One of them was Mark Hornbeek who delivered an impactful session on “How to Architect Continuous Delivery”.  He said that the Indian IT community has really embraced DevOps and the IT teams in the country are very competitive. He added that this in itself is a positive indication to further the DevOps skills in India and instead of outsourcing in parts, it is very important to outsource the entire function to see real efficiency of DevOps and hence the outlook needs to be opiniated in terms of taking a complete project as compared to working on small segments. “It is a great platform for people to connect and meet people who are willing to learn and ask many important relevant questions. In the near future, Devops will go through transformation in terms of patterns of practice which will be recognised as high performance that has transformed business,” he said.

The event made way for people to understand the importance of DevOps  and also interact with the biggest names from across the industry. Speaking at the event, John Willis - President, DevOps and Digital Practices, SJ Technologies said, “It was a great feeling to attend this summit as we get to meet new people who have been in this industry for a while. I have come across people who are smart, aggressive learners and are eager to know more,”

It became a platform for people to come together and work as a team to promote the real essence of DevOps. Niladri Choudhuri, who conceptualised the event said, “This is the first ever DevOps event in India in such large scale with prime focus on the core content and quality of speakers who bring value to organisation. This is a start to more such future initiatives and I thank everyone for their support.”

More About IT management

Be Your Own IT Manager with This CompTIA and Cisco Guide

Remote IT Management Can be Difficult. 'Jamf Now' Makes It Easier for Apple Users.