Amazon has crossed the $1 trillion mark in market valuation, becoming the second company to do so after Apple.

According to a Wall Street Journal report, “It took Amazon just 16 days, compared to Apple’s 622 days to go from a market value of $600 billion to $700 billion.”

From Book-store to Behemoth

Amazon, which started its operations as a niche second-hand bookseller in 1994, is today the global player in the tech space; and Jeff Bezos, its founder and chief executive officer, is among the world’s richest men, with a net worth of $176 billion.

Twenty-four years ago, when the retail sector did not have a strong base in the digital space, Bezos’ Amazon saw an opportunity. The magic started in a dorm room with 10-12 “Amazonians”. Today, the company has over 5,60,000 employees.

In The Everything Store: Jeff Bezos and the Age of Amazon, author Brad Stone talks about how the journey of Amazon t­­ook off in 1995. “A bell would ring on Amazon’s computers, and everyone in the office would gather around to see if anyone knew the customer.” In 2012, its 17th year of operation, the company “cleared $61 billion in sales,” and it will probably become “the fastest retailer in history to surpass $100 billion,” he writes, in the 2013 book.

In the first five years, the customer accounts of the company rose from 180,000 to 17 million and sales skyrocketed from $511,000 to more than $1.6 billion. In the next two years, the company flourished further.

From apparel to its voice-assistant Alexa, Amazon started focusing on several emerging sectors in the digital space, including music streaming and cloud computing. Recently, the company opened two dozen new fulfillment centres, and became the largest online store in India. It made its first delivery by autonomous drone in the UK. The company has also launched its services in Hindi to tap customers from rural areas of India.

While registering the success, Amazon has also earned the reputation of having a churn-and-burn workplace culture. Media reports point to its harsh working culture. Three years ago, an article published in The New York Times reported that employees referred to Amazon's work culture as “bruising”. Bob Olson, a former Amazon Books Marketing employee, is quoted in the article as saying, "Nearly every person I worked with, I saw cry at their desk." The report adds that the company is pushing its white-collar workers to get them to achieve its “ever-expanding ambitions”.

The piece also focuses on the “purposeful Darwinism” approach of managing staff and getting work done from them. It says, “Some workers who suffered from cancer, miscarriages and other personal crises said they had been evaluated unfairly or edged out rather than given time to recover.”

The UK-based journalist James Bloodworth, author of Hired: Six Months Undercover in Low-Wage Britain, went undercover as a "picker" to investigate the lives of Amazon's  workers in an order fulfillment centre. He found that workers were urinating in bottles because they were discouraged from taking bathroom breaks. 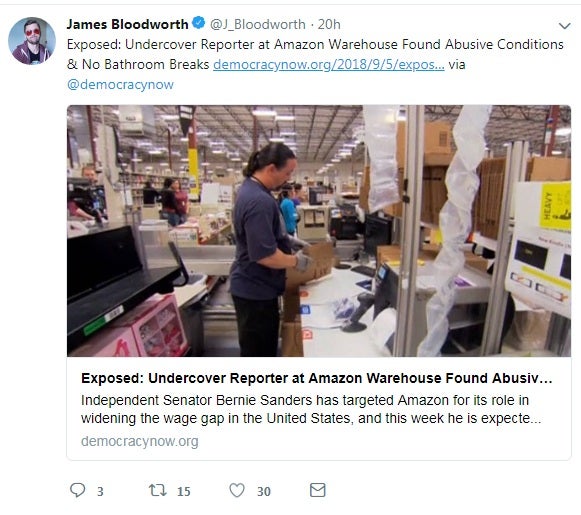 On the Glassdoor website, reviews by employees suggest that the company’s culture has disturbed their work-life balance.

A current employee working as a program management manager says, “Promotion process is not very clear. Unlike other companies that give you at least somewhat of an idea of what you need to do, it is much more ambiguous at Amazon. It seems to be more of a culture of who you know rather than what you are doing.”

An HR manager who works in New Delhi says, “No metric or KRA, trust me I’m an HR and still feeling pathetic about my job. No Work Life balance. No Job Security they even terminate for taking planned leaves. Earlier you might find salary to be good but they will ensure that you become under paid.”

“The company is very competitive and the pay and benefits are really cool. I have had received exciting new and challenging projects. It’s fast-paced yet strategic environment. Have learnt a lot of great team dynamics,” says a current employee, who works in Sunnyvale, California.

"I think work-life harmony is a good framework," Bezos told media. "I prefer the word 'harmony' to the word 'balance' because balance tends to imply a strict trade-off.