How parents are solving the employment crisis for adults with autism one family business at a time.

By Lara Stolman October 16, 2018
Opinions expressed by Entrepreneur contributors are their own.

When Broadway’s Lyric Theater was putting together the menu for concessions for the musical “Harry Potter and the Cursed Child,” they had a specific criterion. They needed snacks that would not disturb the performers on stage when eaten.

The design challenge led Dr. Steven Bier and COO Rachel Cheng, owners of Popcorn for the People, to create custom packaging which doesn’t rustle. It was a big break for this fledgling family business that employs adults with autism spectrum disorder (ASD). Popcorn for the People is now one of the best-selling items at the Lyric’s snack shop and is also a staple at Rutgers University athletics events.

The start-up, based in Piscataway, New Jersey, has doubled its growth each year since 2015 when the Bier family took over the popcorn store at their local mall. They now occupy a pristine 4000 square foot facility suffused by the sweet and savory smells of their signature flavors: Dark Chocolate Espresso, Chicago Baked Cheddar Cheese and French Toast.

“We try to cover the spectrum of abilities with jobs that range from handling money at a Rutgers football game to labeling bags,” says Dr. Bier.

It would be a recipe for a lucrative business but the Biers, fueled by a mission that values purpose over profits, made Popcorn for the People a non-profit. “Money comes in and goes right back into the business. We’re trying to create something sustainable here,” said Bier. 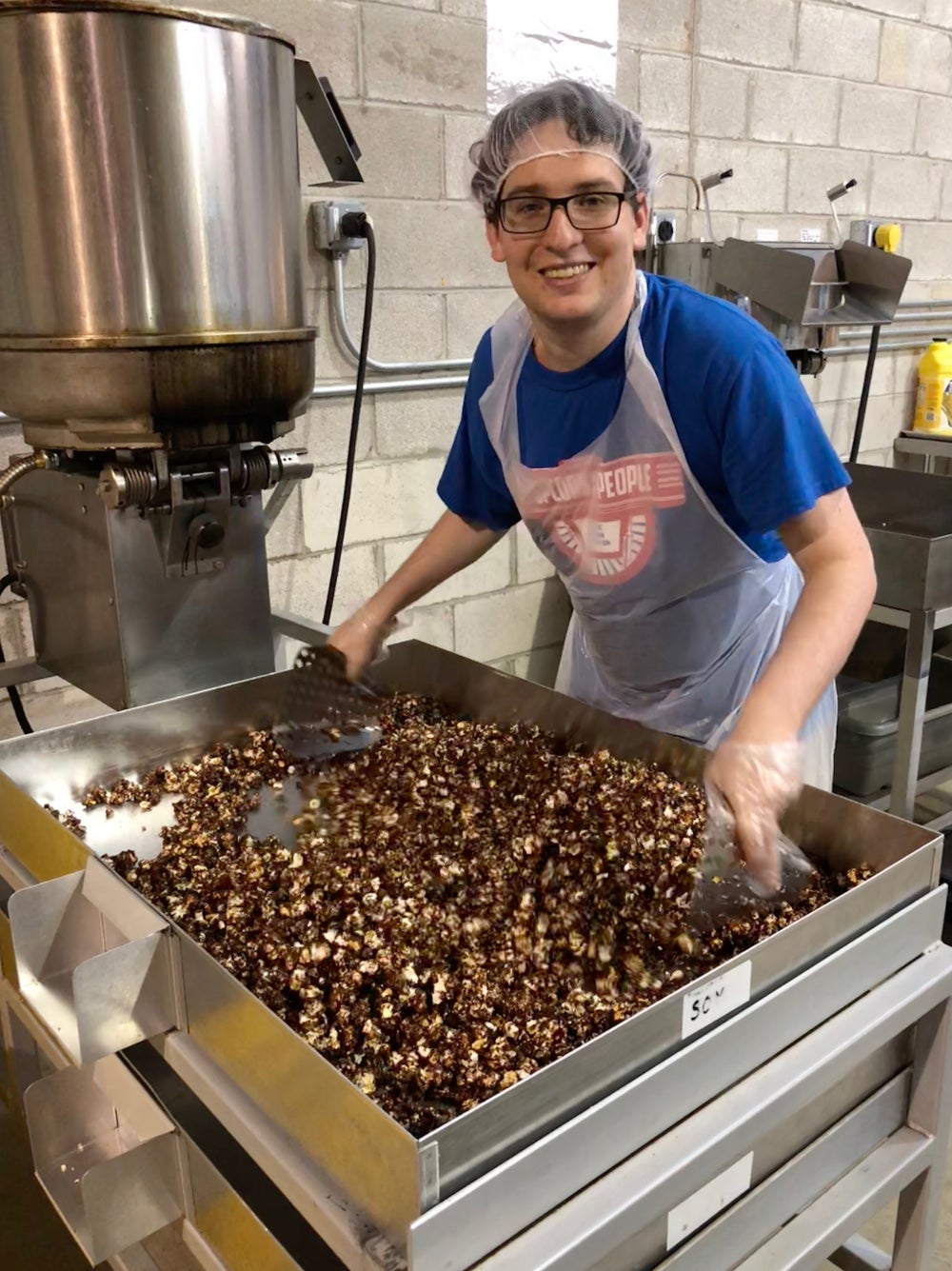 Samuel Bier at work at Popcorn for the People.
Image Credit: Lara Stolman

Drs. Steven and Barbie Bier’s son, Samuel, is on the autism spectrum. He was the inspiration for Popcorn for the People and its first employee. The company has grown to 41 employess, 28 of whom are on the spectrum. The neurotypical staff serve as trainers and coaches for the adults who need support. “This isn’t a day care. We’re trying to solve this problem,” Dr. Bier said.

The problem is the lack of jobs with growth opportunities for adults with autism. Samuel was bagging groceries at a supermarket before the Biers decided “enough already.” Samuel’s passion for popcorn, combined with the Biers’ resolve that their son should have the opportunity to earn a living doing what he loves, motivated them to take the leap. They launched a family start-up, all while continuing their own medical practices.

The Biers soon discovered their greatest asset is their employees with autism.

"Very quickly, you realize that our employees tend to bring to the table the qualities of a good worker without the negatives of a bad worker. No drinking, coming in late, smoking etc., very timely and follow directions to the T,” said Dr. Bier.

It’s well understood by families like the Biers that schools aren’t preparing young people with autism for meaningful jobs and employers largely ignore adults with ASD. While neurotypical youth are encouraged to seek their dreams, young people with autism are seldom encouraged or expected to do anything. It is estimated that up to 90 percent of adults with ASD in the US are unemployed or underemployed. A handful of large companies including Microsoft, JPMorgan Chase and SAP are tapping into the talents of a few of those on the spectrum, but their job listings require college and, in some cases, advanced degrees. It's estimate more than 500,000 young people with ASD will come of age in the US in the next decade. Based on recent attendance and graduation rates, most of them will not obtain a college degree. But they need jobs too.

Family-owned businesses are a driving force in the US economy. In New Jersey, where one in 34 children is diagnosed with ASD -- the highest rate of autism in the country -- parents like the Biers are in the vanguard of a burgeoning autism economy, starting schools, treatment programs, advocacy organizations and now, more and more, businesses formed for the purpose of creating jobs for their own young adults with ASD.

Related: Why Microsoft, Chase and Others Are Hiring More People With Autism

Tapping into the Autism Advantage

Many individuals with autism who struggle with language and social skills excel beyond their typical peers in other skills, such as processing visual information.

While this “ASD Advantage” is something parents of children with autism have long known, it wasn't identified in the scientific literature until 1998 and begs for further investigation. “My son likes to complete tasks and can spot a small detail out of place,” explained Pamela Kattouf of Beloved Bath in Maplewood, New Jersey.She saw first-hand, while working in special education for a New Jersey school district, the grim reality for students on the spectrum when they aged out of district programs.

“The jobs these kids were sampling and training at included packing toiletries for prisoners and wiping down tables with harsh chemicals," she said. "It smelled terrible. The adults supervising and supposedly training the students were not interacting with them. The kids wanted to connect though. It broke my heart. I said ‘not my kid.’ ”

Determined to provide an alternative, Pamela and her friend Patricia Miller founded a soap and candle company for their teenage boys. “We bought a kit at Michael’s and the boys liked it. In a sensory way, it’s very pleasant. We let them choose the fragrances. There’s a lot of choice. I want Justin to have a joyous day. I want him to feel good.”

Kattouf and Miller employ young adults with a range of abilities, including some employees who are non-verbal. Although not all of Beloved Bath’s employees can say how they feel about working there, for Kattouf and Miller, the smiles and enthusiasm speak volumes. 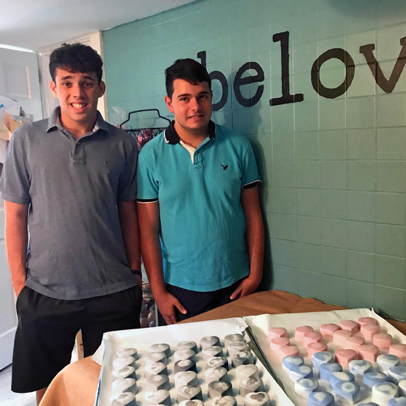 Justin Kattouf and John Miller with some of their Beloved Bath products.
Image Credit: Pamela Kattouf

The Biers and Kattouf and Miller are keeping their day jobs or relying on a spouse while they focus on scaling their start-ups. They’re not alone in finding it’s a steep learning curve to start from scratch with something new in mid-life.

“I’m an extremely unlikely bookstore owner,” says Jonah Zimiles, formerly a lawyer at a big firm who now owns Words bookstore in Maplewood, New Jersey. He had no background in retail, no intention of going into retail and no preparation when he and his wife spotted a store closing sign and decided to go for it for the sake of their teenage son with ASD. “The idea was to use the store as a training program.” Since their opening in 2009, Words has now trained more than 100 people with autism. Zimiles is hoping Words can serve as a pipeline to larger businesses that can use the workforce he’s cultivating. “We have found these individuals to be extremely enthusiastic, dedicated and reliable. Moreover, typical employees have appreciated our efforts to hire individuals with autism and having co-workers with autism has led many of the typical employees to have increased their enthusiasm for their work,” says Zimiles. 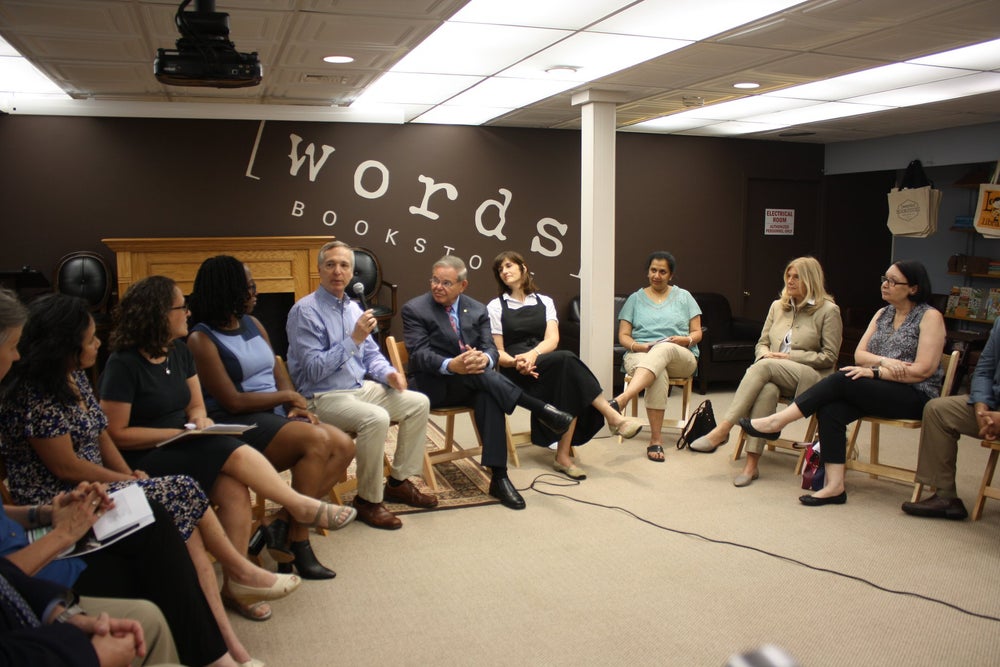 It Takes a Village

The diversity of the autism spectrum makes it challenging for families to navigate services, education and job training for their young adults. What seems like a good fit for one individual on the spectrum may not be for the next.

“As a parent, the problem is each one of us reinvents the wheel,” says Moish Tov, the father of two adults with autism and founder of JoyDew in Midland Park, New Jersey. Tov, a former commander in the Israeli Defense Force’s (IDF) elite Special Forces, was involved with creating a successful IDF program that trains soldiers with autism to analyze satellite images. Now, he has a more ambitious plan. “Part of us are ashamed, we want to hide that we have a child with special needs, each one of us is dealing with a 24/7 journey. As your kids get older you have less friends and they have less friends. It’s very isolating. We have to build a community of parents so we can make the changes that need to happen. It’s something we cannot do one by one. We are trying to create a village. It will take a village to make things work.”

A village is coming together at JoyDew, an umbrella organization which includes a foundation and a for-profit arm. Together they provide continuing education, job training and employment for young adults with ASD. Tov and his wife, Anat Klebanov, along with their staff, are training participants for “21st century” jobs like robotics and social media content management. A program they are piloting with a local radiology practice trains autistic individuals to spot differences in mammography images.

Tov, who has a background in technology and owned his own software company for 17 years says “I am an entrepreneur in my DNA,” but building JoyDew was the result of learning there is no other option for his boys. 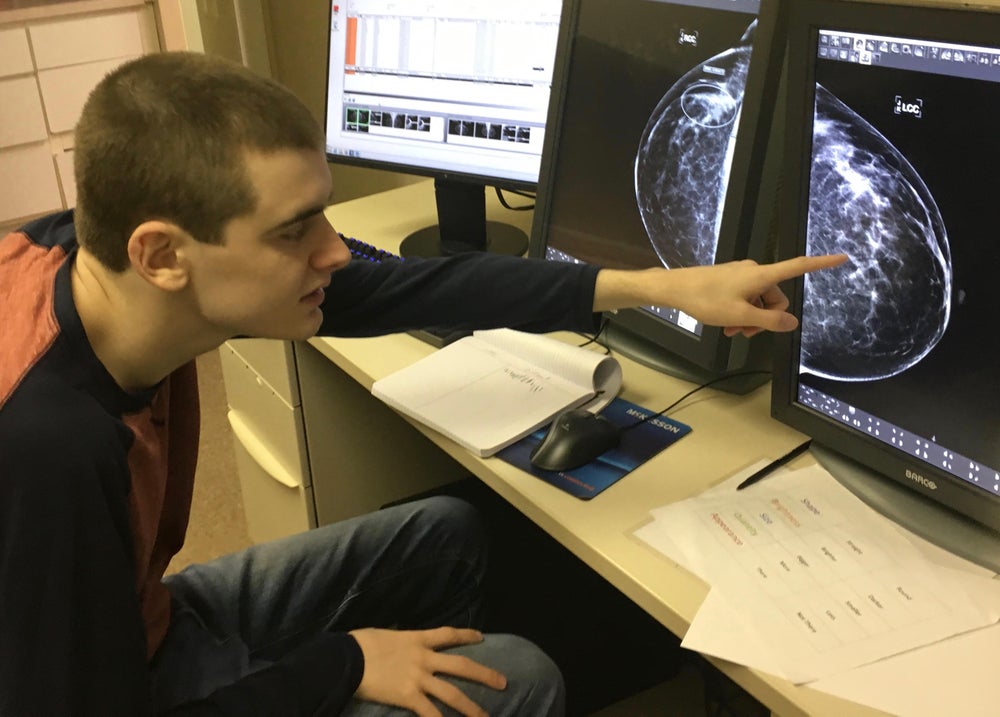 Over the course of two years Tov traveled in the world surveying schools, adult programs, group homes and institutions and programs in 26 countries. He concluded there is no program to train and employ non-verbal people like his sons. Even the Israeli Defense Force refuses to take non-verbal soldiers into the ASD unit. Tov found a pervasive disinterest in figuring out how to fully include individuals with ASD into the workforce and a lack of understanding about what’s possible for young adults with ASD.

JoyDew’s program starts with assessing individuals for eight strengths based on Howard Garner’s theory of multiple intelligences. “Eighty to 90 percent of the people we serve have multiple strengths,” says Tov. “Our kids are good at details, fact-checking, recognizing patterns,” he explains. JoyDew is training their workforce to utilize these skills on contract work in-house. Tov looks forward to expanding the JoyDew model as demand grows. Participants at JoyDew spend part of their day job-training or working, but they also do yoga, music and practice social skills. “When we challenge this population, they’re working hard, a lot of the behavior issues are gone. Parents report they are much more relaxed, they’re happy, they’re tired,” says Tov.

One advantage Tov and the rest of these parent founders have in letting their mission dictate their business models is they have been able to observe and listen to the needs of their employees and tailor their operations accordingly. “Most kids can’t do 40 hours a week,” said Dr. Bier. “We’re trying to provide flexibility.”

Individuals with weekly therapy appointments or significant behavioral support needs can’t work more than two or three days a week, and for many employers that would disqualify them. Beloved Bath, Popcorn for the People, Words and JoyDew all employ autistic employees on a part-time basis as needed. All of these autism entrepreneurs are proving to be part of the community Moish Tov envisioned, making the changes that need to happen for adults with autism to join the workforce.

October is National Disability Employment Awareness Month. This month, consider patronizing these businesses or take steps to help make your own workplace more inclusive. Take it from these families’ values – everyone has something worthy to contribute.