The device uses what Samsung calls an Infinity Flex Display and opens up to a 7.3-inch tablet, which the company says will support three active apps at once.

By Michael Kan November 8, 2018
This story originally appeared on PCMag

Samsung today finally showed off its foldable phone: a device that can convert from a handset to a mini tablet through the use of two displays.

The device uses what Samsung calls an Infinity Flex Display and functions like a book. When closed, it resembles a compact smartphone. But open it up for a 7.3-inch flexible display, which Samsung says will support three active apps at once.

Samsung did not announce a launch date or pricing, saying only that the Infinity Flex Display will begin mass production in the coming months.

"We've been living in a world where the size of your screen can only be as large as the device itself," Samsung VP Justin Denison said at the company's developer conference in San Francisco. "Well, we've just added a new dimension."

It’s a phone… It’s a tablet… It’s a phone that unfolds into a tablet! #SDC18 pic.twitter.com/FgwpJPjqTn

The company unveiled the device at the event in a bid to entice third-party companies to begin designing apps for the radical new product.

Getting that support is crucial. The bending effect means the device will have to change the screen's aspect ratio when moving from phone to tablet mode. One big backer has already signed on: Google said today that its Android OS will support foldable phones through upcoming user interface changes.

The Korean vendor isn't giving the press a good look at the foldable phone. But in an afternoon session at the conference, Samsung revealed some specs for the concept device. The flexible display inside has a 1,536-by-2,152-pixel resolution, while the smaller "cover display" measures at 4.5 inches and has an 840-by-1,960 resolution. 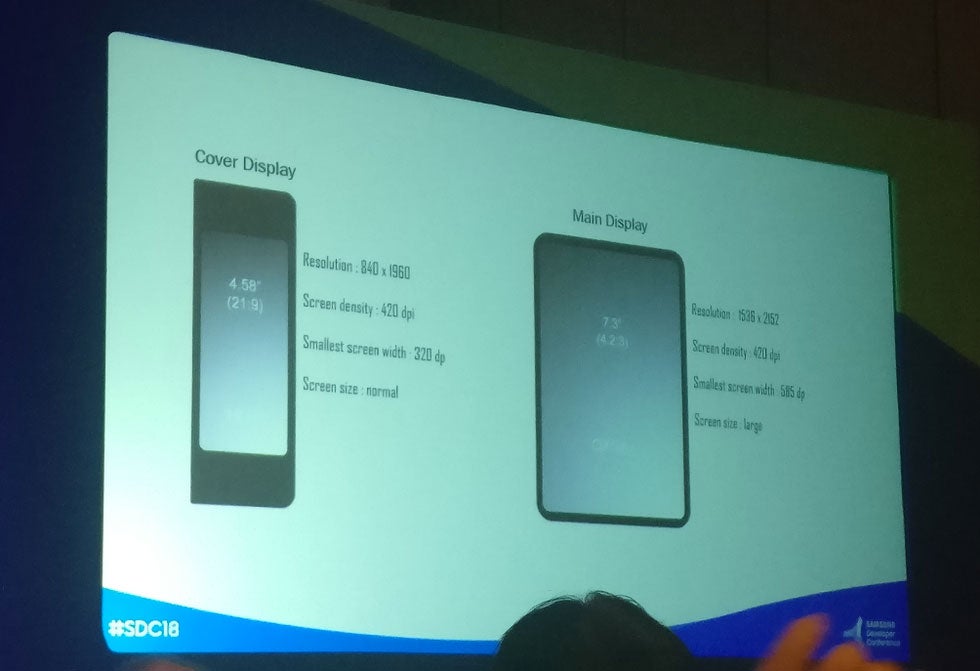 Samsung has also been working with Flipboard on designing its news app to work with the foldable phone technology. During the sesson, Flipboard's vice president Claus Enevoldsen showed off some of the results. In phone mode, you can scroll through the news app like normal. But when you find a section that catches your interest, you can switch into tablet mode to see more of the content.

The ability of the larger display to support three active apps at the same time will be a key feature for the device, Samsung principal engineer Jisun Park said during the session. For instance, you'll be able to watch a YouTube video, browse the web and see messages from your friends, all on the same screen. (He also noted that when you open the phone, the smaller cover display will shut off.)

On the hardware front, Park said his company is still determining the device's exact specs, so the end product could be different than what Samsung revealed today. "We are still trying to find the best experience as well, so it will evolve," he added.

During the conference, Samsung also previewed other upcoming screen technology that can cover most of the device, and eliminate the intrusive notch for a smaller cutout. That's good news for anyone who hates a big notch. Outside of manufacturing its own phones, Samsung has also supplied displays to smartphone companies, including Apple.

The Korean vendor isn't the only vendor working on a foldable phone. Huawei is working on one, too. And last week, a little-known startup called Royole also introduced the Flexpai, which it plans on selling in China next month. We had a chance to try it, but weren't totally sold. Time will tell if Samsung can offer a better take on the technology and convince consumers to buy it.

"Samsung needs to focus on perfecting a few killer use cases when a product does come out," said industry analyst Patrick Moorhead in a tweet. "Spray and pray won't work here."