Entrepreneurship Has No Minimum Age: Lessons From BizWorld UAE's The Kidpreneur Award 2018

Out of all the students that applied from across the UAE, 10 finalists under the age of 15 were selected to pitch their business ideas through elevator pitches to a panel of judges.

By Helen Al Uzaizi November 26, 2018
Opinions expressed by Entrepreneur contributors are their own.
You're reading Entrepreneur Middle East, an international franchise of Entrepreneur Media.

In October this year, BizWorld UAE, a social enterprise specializing in entrepreneurship education, and Entrepreneur Middle East organized the KidPreneur Award 2018, the largest business idea competition for students in the UAE. Out of all the students that applied from across the UAE, 10 finalists under the age of 15 were selected to pitch their business ideas through elevator pitches to a panel of judges, in an exercise designed to prepare young people for the entrepreneurship world.

The students had to pitch to a judging panel that would intimidate even grown-up entrepreneurs, which was made up of Magnus Olsson, co-founder, Careem, Kris Fade of Virgin Radio Dubai’s The Kris Fade Show, Nabra Al Busaidi, Executive Director, Young Arab Leaders, and Wissam Younane, CEO, BNC Publishing (the media house behind Entrepreneur Middle East). The young innovators did not go at it alone though- they were paired up with some experienced industry mentors, ranging the field from CEOs, general managers, heads of marketing, and communication experts as well.

After a grueling two hours of pitches and tough questions from the judging panels who evaluated the students on the creativity, viability, and marketability of their businesses, the prizes were given out: first place went to Sean Sanoop George (aged 11) for his Read Swap Repeat book sharing idea. Second place went to Afia Shahid Sjaikh (aged 13) and Hurairah Muzammil (aged 14) for their Disaster Display emergency response system. Third place Karl Tchakmakian (aged 13) for his EduBox educational initiative. Tied for fourth place was Sajini Varadharajan (aged 7) for her Sajini's Green Balcony environmental idea, and Emily Lindsay (aged 11) for her KidsCred e-commerce system.

The KidPreneur Award, which is the first of its kind in the entire MENA region, was designed to encourage young people across the United Arab Emirates to unleash their inner entrepreneur. The goal of the KidPreneur Award was also to nurture students’ entrepreneurial spirit and get the future generation on the path to thinking like entrepreneurs, innovators, and inventors who will grow up to shape our future economy and community. Reflecting on this exercise, we realized so many paradigm-shifting ideas when it comes to entrepreneurshipideas that need to be recognized by decision makers at all levels that impact the entrepreneurship ecosystem: 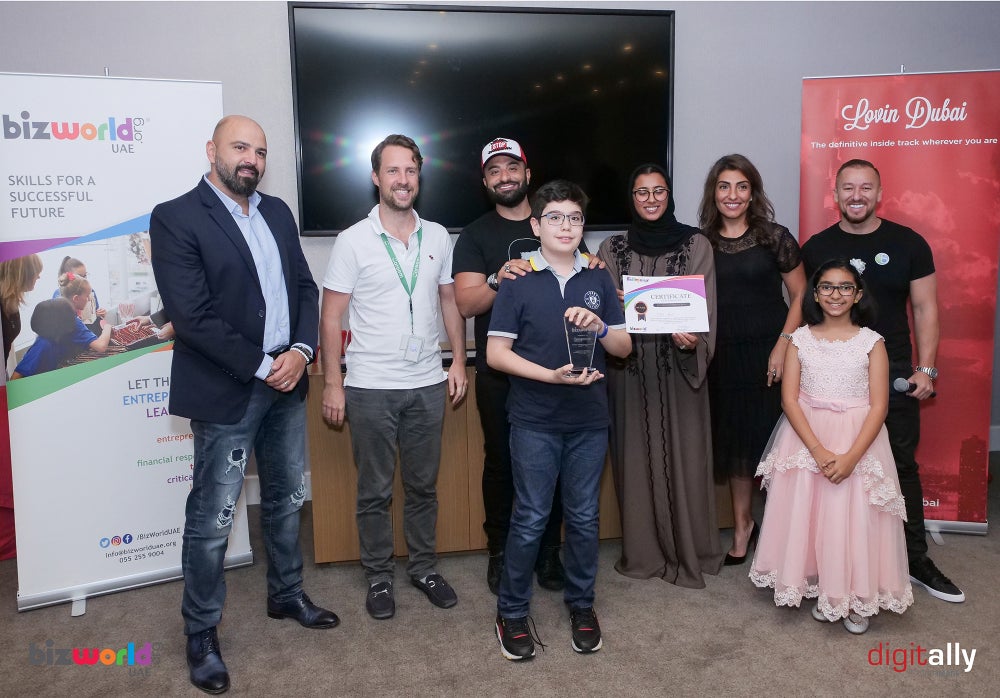 Participants at The Kidpreneur Award 2018

1. Schools need to adopt entrepreneurship in their curriculums

Schools, both private and public, are not doing enough to impart basic business and financial knowledge. Understanding how businesses operate, keeping track of finances, and working with others are not just important skills for entrepreneurs; these are basics that are needed in the real-world. The earlier students pick up this basic knowledge, the less they will have to struggle with managing their bank accounts, being effective in their jobs, or getting along with others in any setting. In parallel, entrepreneurship education works on building up resilience, developing a sense of optimism, and other important interpersonal skills. These traits will help the future generation deal with challenges, and find ways to succeed in more competitive environment.

2. Entrepreneurship has no minimum age requirement

Every student that participated in the KidPreneur Award was under the age of 15. Every student that made it to the finals had a strong business concept, smart social initiative, or an invention that had potential to change lives. These students saw solutions to problems ,or ideas to fill gaps in the market, and were given the space to further develop these ideas at the event. They didn’t need years of working at a job to develop these ideas; they had it inside them all along- they only needed the space and support to develop them.

3. The idea of traditional employment is slowly -but surely- being challenged

Parents want to see their children grow up to become successful professionals, a renowned doctor, or a big lawyer. There is nothing wrong with that, but entrepreneurship has never been high on that list for parents. However, that perception is beginning to change. Every student who attended the KidPreneur Award was supported by their parents- we even had many parents encouraging their children to apply. Part of the reason could be that famous entrepreneurs are now enjoying rockstar-like media coverage, but we believe something deeper is at play. The global economy is beginning to shift from traditional manufacturing to greater emphasis on tech startups and innovation, and parents are beginning to understand that future jobs are going to be in these sectors, not necessarily the established jobs of the 80s and 90s.

4. It’s our responsibility to kindle the entrepreneurial spirit in children

One key takeaway from the event, and a core aspect of BizWorld UAE’s mission, is that we need to do more collectively (government, education, and private sectors) to support children’s entrepreneurial ambitions. Governments will benefit from raising a generation of entrepreneurial youth that will create jobs that can solve the unemployment problem, drive innovation, and make their economy more globally competitive. Schools and the education sector will benefit by equipping students with critical thinking, creativity, and financial skills that children need to succeed, no matter what career path they choose. Teaching entrepreneurship means teaching students how to think, not what to think. The private sector should also get involved because employing entrepreneurial minded staff means a more capable and efficient workforce. They will also have access to a workforce that can think creatively to solve problems and innovate, to keep their businesses ahead of the competition.

Related: Five Ways To Foster A Hunger For Innovation In Children