The CEO and co-founder of RiseUp Summit is catalyzing Egypt's entrepreneurial ecosystem with his platform's consistent year-on-year growth.

It has been said that an enterprise’s culture is -for the most part at least- defined by those who found and/or lead it, and as such, it’s a testament to RiseUp Summit co-founder and CEO Abdelhameed Sharara that it took me only a few minutes of being at the 2018 RiseUp Summit in Cairo to realize that what I was seeing around me was essentially an extension of this Egyptian entrepreneur’s personality, passion, and purpose. This was my first time being at the RiseUp Summit (it was the event’s sixth edition), but there was no missing the feeling of community and positivity that I had been told was a particular characteristic of this gathering of the MENA entrepreneurial ecosystem over the years.

More than 6,000 people attended this year’s instalment of the RiseUp Summit running from December 7-9, 2018, with its open layout, conversational setting, and casual vibe making for a rather collaborative atmosphere that permeated all three days of the event. But this ambiance wasn’t something that happened just by chance though- through a conversation with Sharara, I understood that all of what I was seeing and experiencing was made possible through months of work, planning, and design by the RiseUp team. “We work all year around on the event,” Sharara says. “We have a dedicated team of 50 people in [various] departments. These are the heroes that actually deliver the Summit; I’m just the person who speaks about them.” 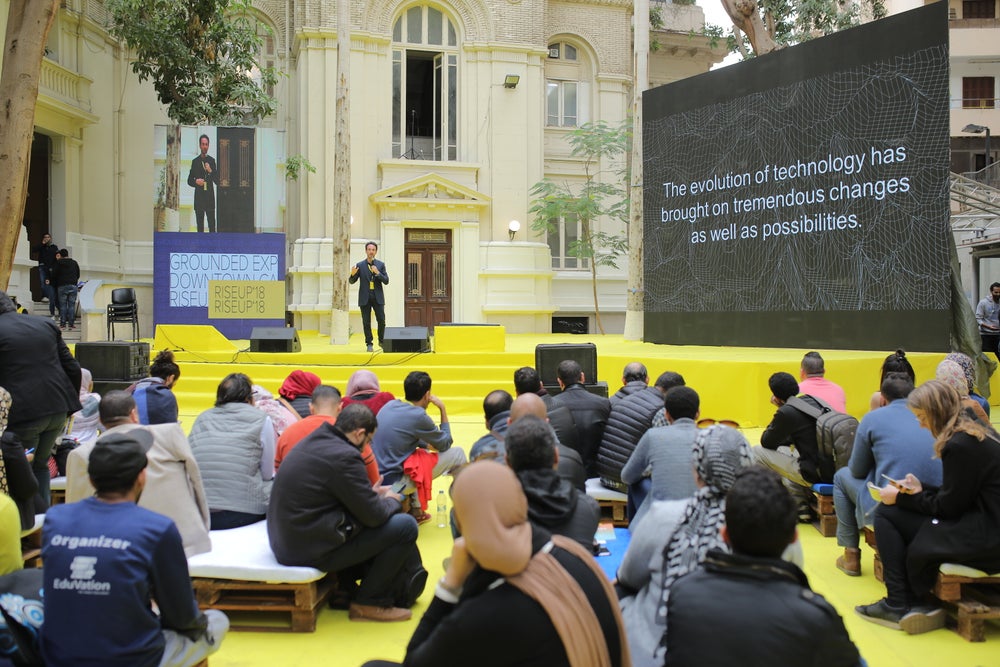 RiseUp Summit has grown by leaps and bounds from when it was launched in Egypt in 2013 by Sharara and co-founder Con O’Donnell, with the duo seeing the event as a way to bring together the fledgling but fragmented entrepreneurial ecosystem in the country at the time. Sharara remembers that year to have been a rather bleak one for Egypt: the country didn’t have a government in place then, and most people were having a rather pessimistic view toward the future- but Sharara wasn’t one of them.

“You know, right, [that] I am, like, a very positive person,” he tells me. “I was annoyed with the status quo. I wasn’t happy about what was going on, and with my co-founder, Con, we were, like, let’s do something crazy, and let’s bring everyone together in one place, and show them something [to be hopeful for]. That’s how the name ‘RiseUp’ came aboutit was sort of a call for action.” And people did spring into action- for one, key stakeholders in the region’s entrepreneurial ecosystem (which included Wamda, Flat6Labs, Injaz, The American University of Cairo, and others) rallied together to support the RiseUp Summit.

Partners came on board as well, and The GrEEK Campus, which today bills itself as “the world’s first heritage-driven technology center,” was just launching in Cairo at the time, and it thus fit in easily as a space where RiseUp could happen. However, it wasn’t all smooth sailing either- a week before the event was set to take place, there was a curfew in the country, and Sharara remembers thinking that RiseUp would simply not happen. But he was proven wrong: the entrepreneurial community in Cairo came together to help him and his team put the event together as planned, heralding the start of what Sharara calls “the RiseUp movement,” which went from attracting about 2,000 attendees at that first event, to now having more than 6,000 at this year’s edition. 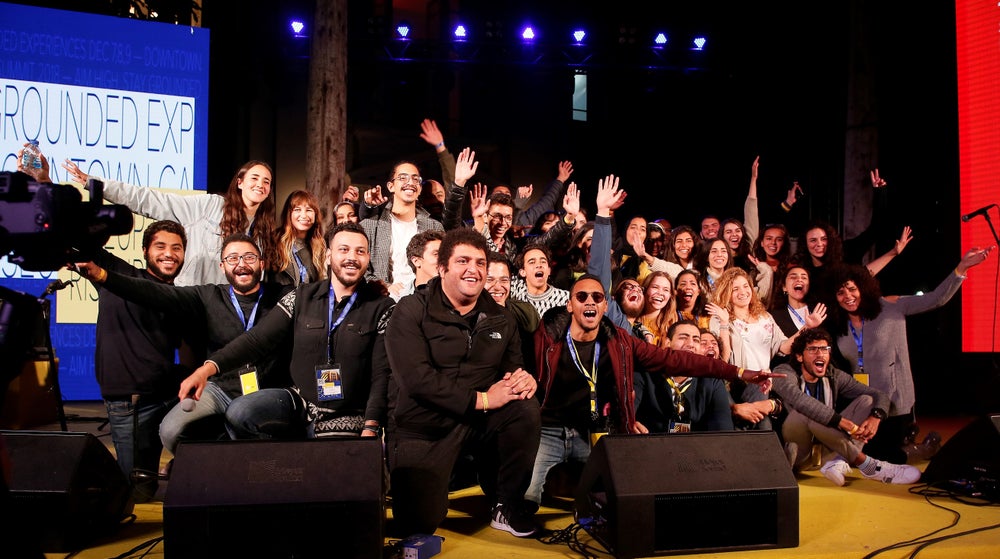 Speaking about RiseUp as a business, Sharara reveals that the company made EGP600,000 (approximately US$33,000) in revenue that first year, while today, that figure has grown to around EGP23 million ($1.25 million). The company isn’t profitable yet, Sharara says, but he notes that the long-term goal is to make RiseUp a one-stop-shop for all startup resources. It’s for this reason that RiseUp is investing in a digital arm that will work on initiatives to “enable” the ecosystemthis year’s Summit, for instance, saw it release The Startup Manifesto, a report that outlined current challenges in Egypt’s entrepreneurial ecosystem, along with prospective solutions for them.

As for the events side of the business, Sharara notes that besides building on RiseUp Summit’s success in Egypt, he is keen on having the company employ its expertise in this arena in other emerging startup communities as well. RiseUp has already started working on this effort- Sharara notes that he and his team were behind the Hajj Hackathon that was held in August 2018 in Saudi Arabia, which saw more than 2,950 developers in attendance at the threeday event, and thus break the Guinness World Record for most participants in a hackathon. RiseUp is thus gearing up to build on its role as an entrepreneurial ecosystem enabler in the MENA region, and Sharara used this year’s Summit to also announce the opening of an investment round for the company, which is currently being led by Endure Capital, Enara Ventures, Kamelizer, and 500 Startups, and targeting closure by January 2019. 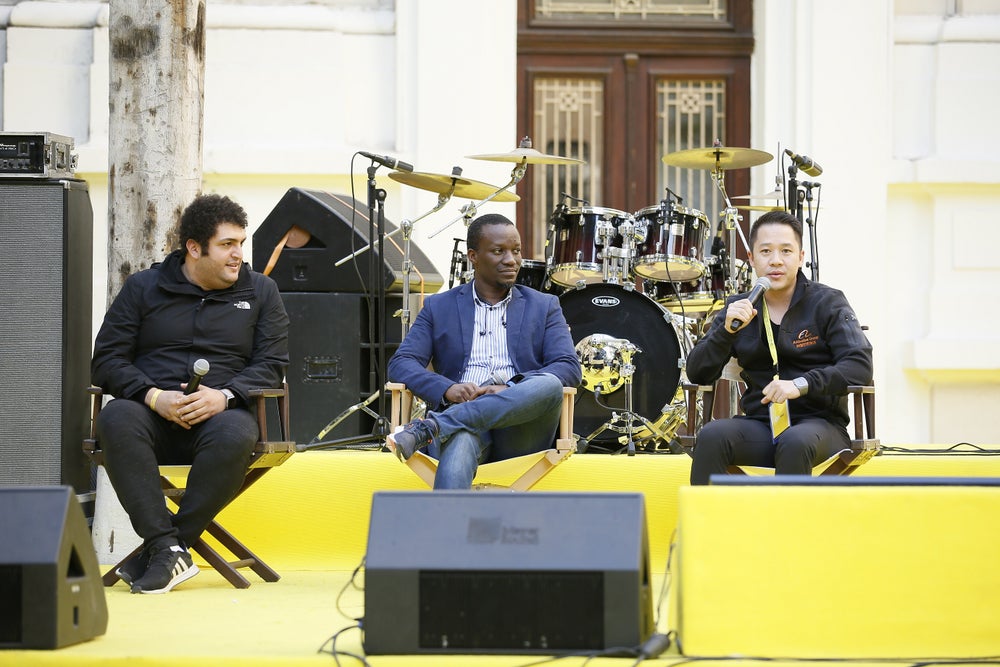 But even as Sharara touches upon the business aspects of RiseUp to me, he makes it clear that he’s not running just an events company- this is an enterprise driven by purpose, he says, and he is very clear that RiseUp will (and should) never lose sight of being a catalyst for entrepreneurship and innovation in the MENA. This is why Sharara has an independent team working on the agenda for the RiseUp Summit, and even he, as the CEO, cannot influence them- which allows for an event featuring speakers and sessions that are both focused and driven by good, useful content. At a time when a multitude of socalled ecosystem-enabling events are being held in the region purely as a vehicle to make money for their organizers, Sharara is clear that RiseUp will never be run in such a manner.

“An event is an experience- we are experience-driven at RiseUp; it's one of the values we have,” Sharara says. “We see a lot of events, a lot of summits, sector-specific summits, all that stuff, [that don’t focus on the experience], and the challenge with that is people who do it don't realize that the most important constituent for an event’s success isn’t its sponsor. The most important constituent is actually the attendee. So, if in your [event] design, you don't put the startup at the core of your value proposition, you fail; you fail miserably. You may make a lot of money in the beginning, but you fail at a sustainable level… It annoys me to see other events that are taking a lot of money, but giving very little value. But, I think as with any product or service in the world, you have the bad, and you have the good, and that's true of events as well.”

When I ask him to advise entrepreneurs and startups on how to go about choosing ecosystem events to attend, Sharara replies that one must have a clear purpose in mind when signing up to be a part of such a gathering. “Don't attend an event unless you really know what you want to do there,” he declares. “Or you’re coming for the energy and inspiration- you want to feel you’re not alone, right. But if you don’t need any of those things, don’t come to RiseUp, don’t come to any event.”