When used effectively, the instant messaging service can be a lead generation as well as a client acquisition and retention tool
Next Article

Four years ago, Jangkar Bawono, a college student in Indonesia, began working with local craftsmen to create leather shoes for friends. Their unique designs were such an instant hit that Bawono started a leather shoe business. Since October 2015, Portblue has become an established brand in the Southeast Asian country, and has also created regular job opportunities for artisans in Surabaya in Indonesia’s East Java province.

It’s not just the unique designs that worked in Portblue’s favour. Bawono’s marketing strategy was as much responsible for making his business an instant hit. “We operate without a specialized marketing team. We focus on just one app—WhatsApp,” says the 20-something entrepreneur. “Almost all of our customers have and use WhatsApp. Hence, we felt it was better to focus on an app that’s used by most people.”

And the strategy worked. Their sales grew 70 per cent each year, and from a three-member team in 2015 they became a company of 50 employees. “Portblue sells between 800 and 1,400 pairs every month. Almost 80 per cent closing sales are done through WhatsApp Business (they switched from WhatsApp to WhatsApp Business last year) compared with website,” he shares.

Since its launch in January last year, WhatsApp Business has become a popular free-to-download app among local businesses to communicate with customers, generate leads and make profits. There are more than three million people actively using WhatsApp Business app, many of which are in Asia.

The Android app, released initially in six markets (India, Indonesia, Italy, Mexico, Britain and the US) and now globally, gives small businesses a formal presence on WhatsApp and offers tools that make messaging with customers more efficient, such as greetings (for introduction) and away messages (to inform companies that the customer is busy), and messaging statistics that offer simple metrics like the number of messages read to see what's working.

“It works because most Indonesians choose to interact via WhatsApp. They feel secure, comfortable, and convenient to obtain information about us as their inquiries are replied by humans (unlike robotic reply in website),” says Bawono.

Indonesia’s love for WhatsApp is well known. Hootsuite’s 2018 “We Are Social” report shows that WhatsApp outranks Facebook and Facebook Messenger apps in terms of monthly active users in the country. That’s why 90 per cent of SMBs think that WhatsApp helps them communicate with customers.

One of such brands is Sale Stock. The e-commerce website successfully used the app to generate awareness by announcing new products, making personalized recommendations to customers based on the products they viewed and sending updates like order confirmation and shipping, to customers after they placed an order. 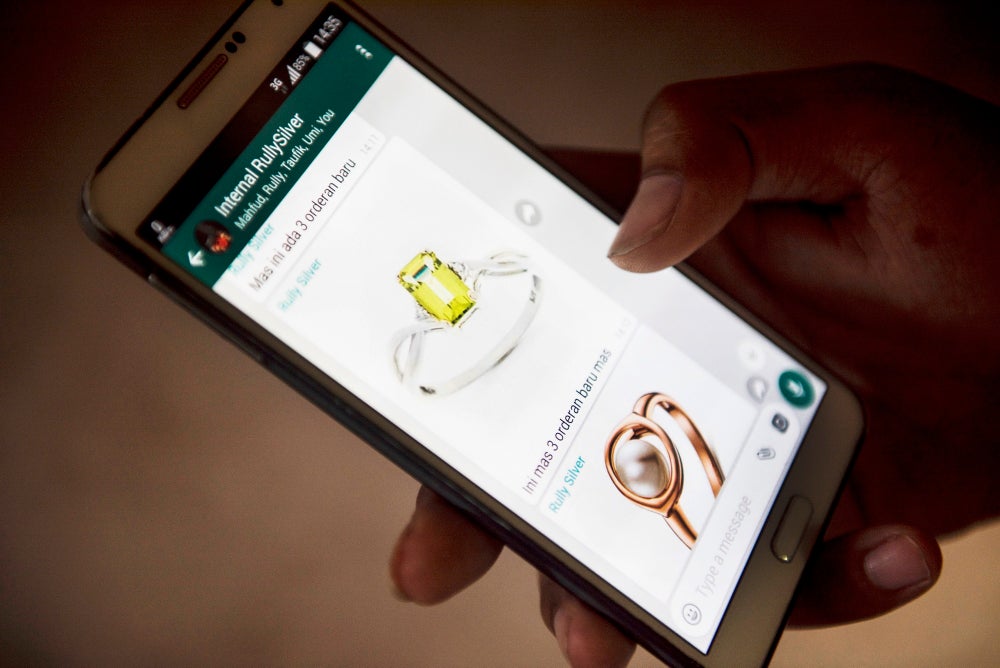 Ruli Setiawan says eight of the 10 orders at Rully Silver, a 30-year-old jewellery brand which has an office in Indonesia’s popular Silver City (Kotagede), are made through WhatsApp.

Rully Silver was established in 1989 as a business-to-business company that supplied crafts to Bali, Jakarta, and Europe. The business then collapsed. “In 2010, I took over and started doing direct selling to end users by changing all business concepts and finally became a B2C (business-to-consumer) company,” says Setiawan. It was then that he started using WhatsApp, and now he’s switched to WhatsApp Business.

“We used to use classified ads as a way for us to market our products and we directed the sales to the native (built-in) messaging app. The problem was, the smartphone had too many contacts, issues, or broke, we then were no longer able to run the business anymore. And this had happened three times to us,” Setiawan recalls. For now, he’s happy with WhatsApp. He claims to have witnessed a growth of 200 per cent in business “because WhatsApp/WhatsApp Business is now our primary bridge to connect with our customers.”

The thing about WhatsApp is, says Bawono, “it allows businesses to make it personal, to make the customers understand that they can trust us, that we are here if there’s any problem.”

Agrees Setiawan. “Sometimes WhatsApp also becomes the validator if a business is a real one or a scam.”

3 Cybersecurity Measures to Ensure Safety in 2021