What Worries Global CEOs The Most?

A chief executive officer (CEO) has overall responsibility for effectively steering a company to success, and their role becomes more important when the organization expands to new territories. But have you ever wondered what keeps them awake at night?
PwC's annual global CEO survey, released alongside the World Economic Forum (WEF) in Davos, Switzerland, finds that the world’s CEOs are increasingly worried about trade disputes and the unpredictable geopolitical landscape. Trade conflicts, policy uncertainty, and protectionism have replaced terrorism, climate change, and increasing tax burden in the top 10 list of threats to growth.

Stressful Times Ahead
The 22nd survey of 1,378 chief executives in more than 90 territories explores what CEOs are saying about the year ahead. Conducted in September and October of last year, the survey drills down on CEO insights in top-of-mind areas such as growth, data and analytics, and artificial intelligence. 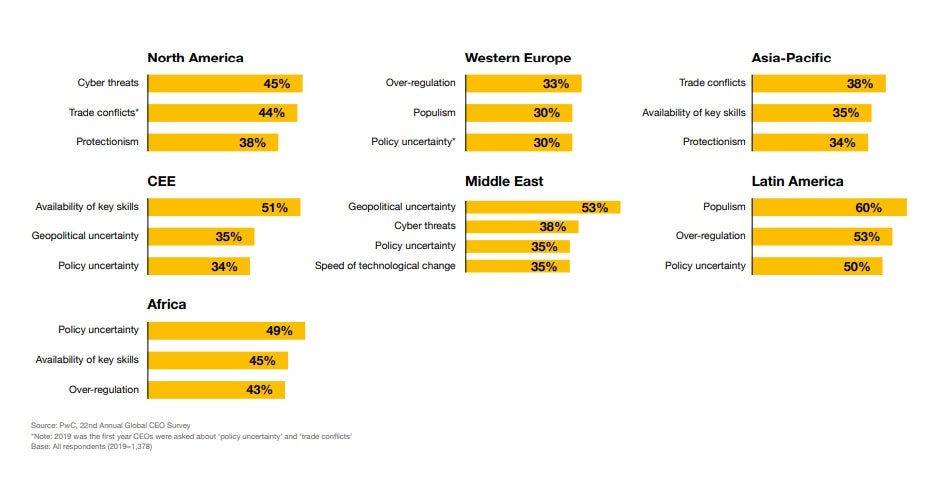 The CEOs have turned their focus to navigating the surge in populism in the markets where they operate.
“Trade conflicts and protectionism are major concerns in North America and Asia-Pacific and also weigh on CEOs’ minds in Western Europe, Central and Eastern Europe, and the Middle East. Of those CEOs who expressed ‘extreme concern’ about the trade conflicts of 2018, the one between the US and China overshadowed other protectionist moves as particularly worrisome, with 88 per cent expressing concern. It outweighed other trade tensions not only in the minds of Asia-Pacific and North America CEOs but also those in Western Europe,” the report states.
Asked how they were adjusting their operating model and growth strategy to accommodate these trade conflicts, most of these “extremely concerned” CEOs responded they are not doing much beyond “adjusting their supply chains and sourcing strategies’. On a global basis, less than a third of these CEOs are “shifting their growth strategy or production to alternative territories”, or “delaying capital expenditures” or “foreign direct investment”.

Trade War is Top Worry
Of China’s CEOs who are “extremely concerned” about trade conflicts, a majority are taking a strong reactive approach.
The report notes that the CEOs of China stand out as the most proactive and vigorous in pulling every lever. Sixty-two per cent of those “extremely concerned” about the trade war are “adjusting their supply chain and sourcing strategy”. A majority are “shifting their growth strategy to alternative territories”. Roughly four in 10 are “shifting production” and “delaying capital expenditures”.

Jaime Augusto Zóbel De Ayala, chairperson and the chief executive officer of Ayala Corporation in the Philippines, says, “Interestingly, I do believe that the escalation taking place between China and the United States is actually leading to renewed opportunities within ASEAN. I think supply chains are getting disrupted, and I do believe ASEAN will be a net beneficiary of this disruption as companies look to a ‘China-plus-one’ model, or perhaps even consider moving out of China to be able to continue selling to the United States.”

A China-Based Company Has Launched a Person-Like Robot, Beating Tesla in the Process