I Spent Two Days with Decorated War Veterans. Here's What I Learned About Leadership.

Eleven combat-tested lessons to win in business and life.

March 12, 2019
Opinions expressed by Entrepreneur contributors are their own.

This is a guest post by Steve Costello, head of membership and co-founder of The Oracles, a mastermind group composed of the world’s leading entrepreneurs.

Everyone there had their own business challenges, from rapidly changing technology to recruiting good people. Retired Navy SEAL officer Leif Babin gave one solution to all of them: leadership.

In the Battle of Ramadi during the Iraq War, Babin and his counterparts learned invaluable and painful leadership lessons, which they have since tested in business. Here are 11 of them.

Day One began at 4:45 a.m. with physical training on the roof of a dimly lit parking garage near San Francisco Airport. “Fall back down, get back up — that’s life,” encouraged retired Navy SEAL commander and multiple New York Times best-selling author Jocko Willink to my group at the burpee station. “Switch off the part of your brain that says you’re tired and need a break.”

Forty-five minutes later, it was over. Despite the chilly 50-degree temperature, most of us were drenched in sweat. Willink later explained the purpose of waking up early for rigorous exercise: it instills self-discipline, a skill that helps you accomplish hard tasks throughout the day. 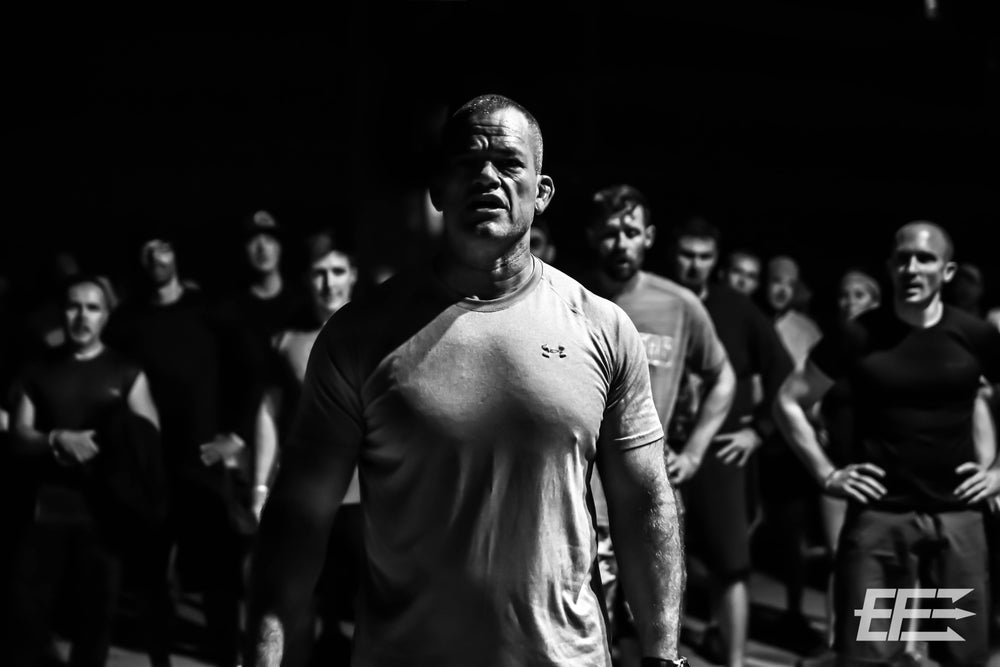 Teams should support each other to accomplish the company vision. “If your business has multiple silos who sabotage each other, you’re only helping the enemy: your competition,” says Willink. “If the team fails, everybody fails.”

“Our SEAL team fought alongside the Army and Marines in Iraq,” adds Babin. “Their uniforms, terminology, equipment, and tactics were different than ours. But we supported each other because we wanted to win.” 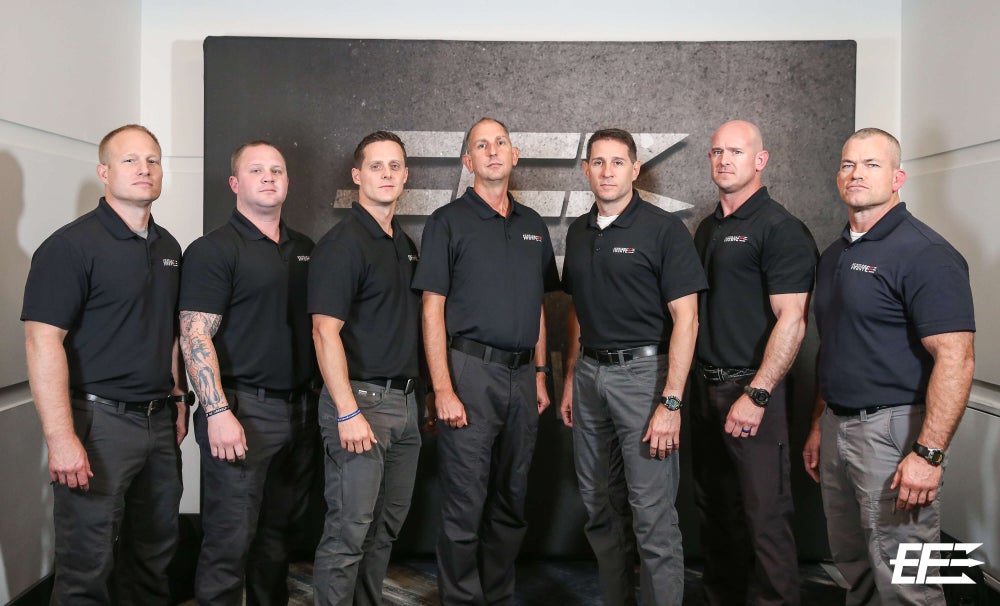 The Echelon Front team is comprised of retired Navy SEALs, a Marine TOPGUN pilot, and an Army tank commander, who fought alongside each other in Ramadi, Iraq during 2006.
Image credit: Courtney Henderson

Complexity breeds chaos. If people don’t understand, they can’t execute. “Create a simple plan, then communicate it clearly and concisely,” says Willink. “To ensure your teammates understand, ask them to explain your instructions back to you.”

Everyone must understand what to do and why, as well as the expected outcome. This requires frequent communication and training. “Make this a priority, even if you think you don’t have the time or budget,” says Babin. 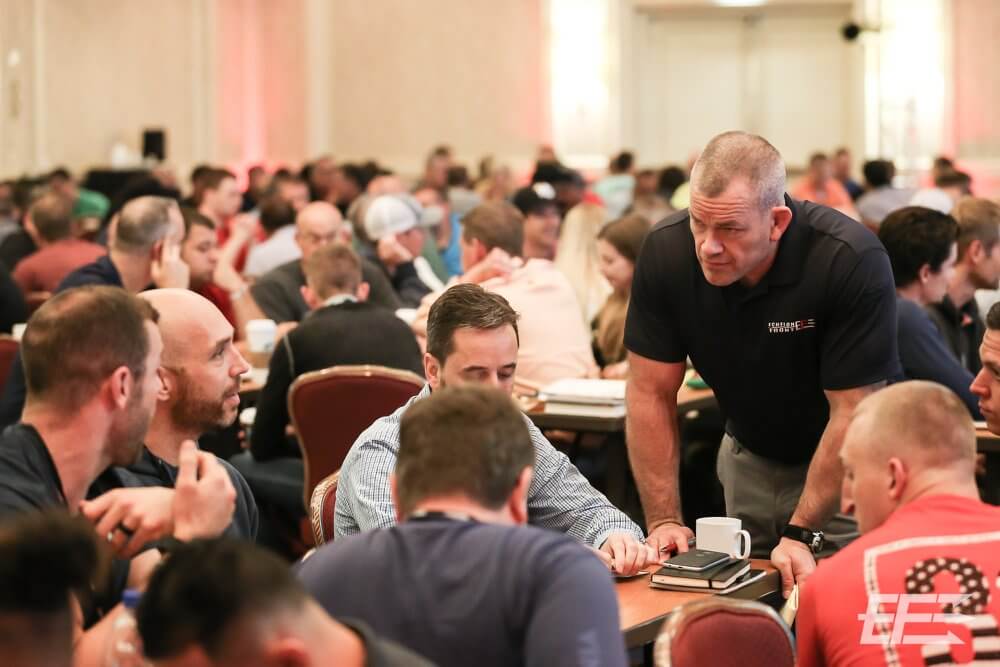 Trying to solve all your problems simultaneously solves nothing. “Focus your mind, people, and resources on solving the most critical problem,” advises Babin. “Detach from the chaos and your emotions to determine the highest priority.

“Relax, look around, and make a call. Then execute and move on to the next priority.” 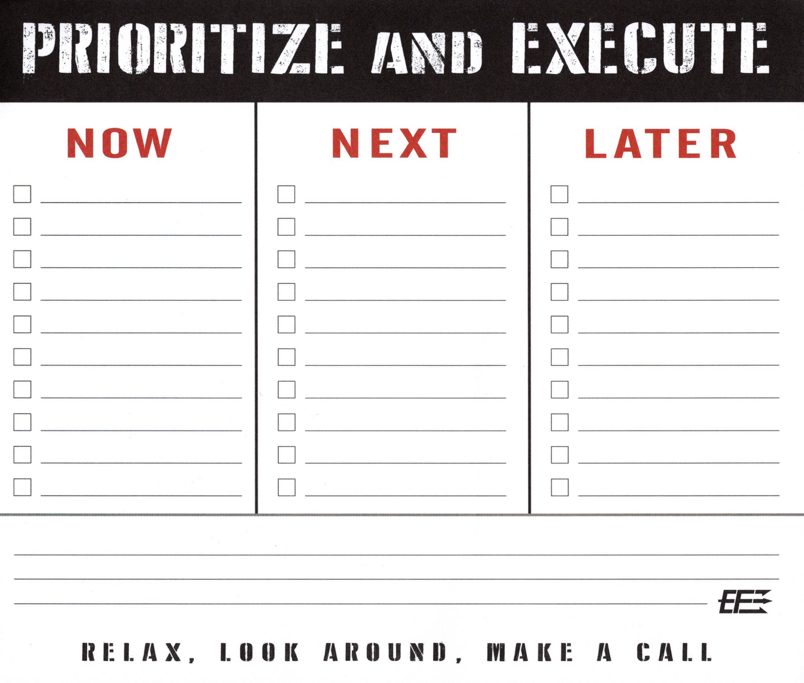 No leader can manage it all, so empower others to make decisions. “Imagine you arrive late to a meeting,” says Babin. “If your team hasn’t taken the initiative to start without you, that’s a sign you’re micromanaging them.”

Willink recommends giving everyone leadership positions as part of their training. “If someone has a big ego, task them with something they’re incapable of leading. They’ll be forced to ask for help or get humbled,” says Willink. “If someone isn’t stepping up, task them with something they are capable of leading. Their confidence will grow, and they’ll learn how to support leadership better.”

“Ego is the biggest killer of success in life. If you blame and point the finger at others, your team naturally becomes defensive,” says Willink. “How do you know if you’re a good leader? Ask yourself if your team is effective or ineffective,” says Babin. “Great leaders put the team’s mission ahead of their personal agendas.” To take ownership of issues, Willink recommends using language like “It’s my fault,” and “we” instead of “you.”

“Never settle, even when you’re successful,” says Babin. “Be your own harshest critic; otherwise you can’t improve. What standards do you set for yourself? What do you preach to others but tolerate in yourself?” 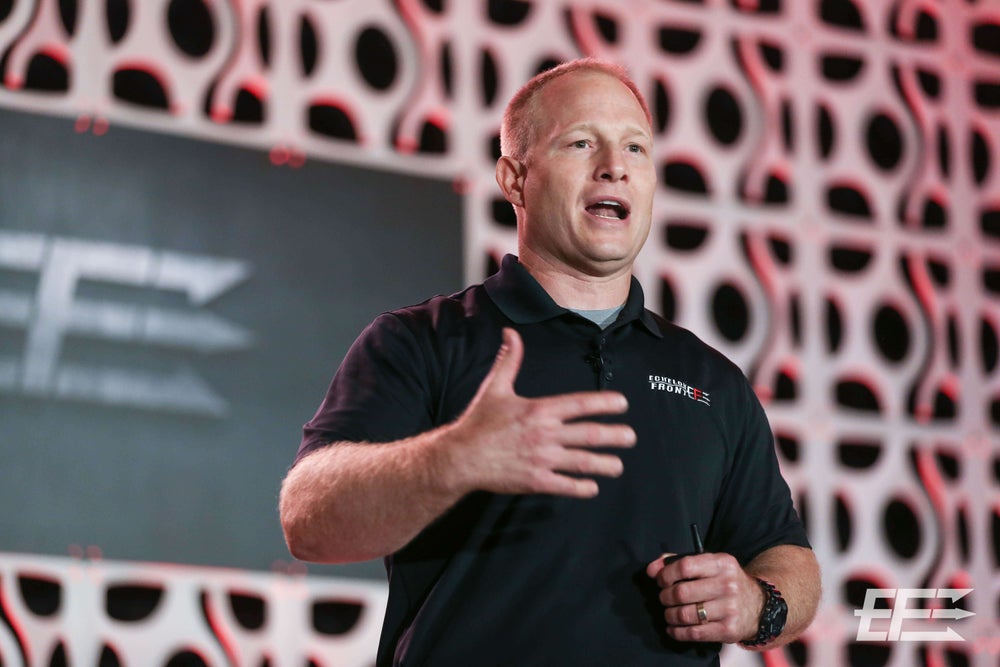 “On the wall of our gym in Iraq, we had a sign that said, ‘The enemy thanks you for not giving 100 percent today,’” says JP Dinnell, a retired SEAL sniper. “If you remain complacent from the ‘disease of victory,’ the competition will outflank you. Think about Blackberry and Blockbuster.”

When Willink took command of SEAL Task Unit Bravo, he renamed it Task Unit Bruiser. “Your team takes on the persona of whatever you call them,” he says. “We took extreme ownership of everything in our world — aggressively solving problems, never making excuses, and learning from mistakes.” 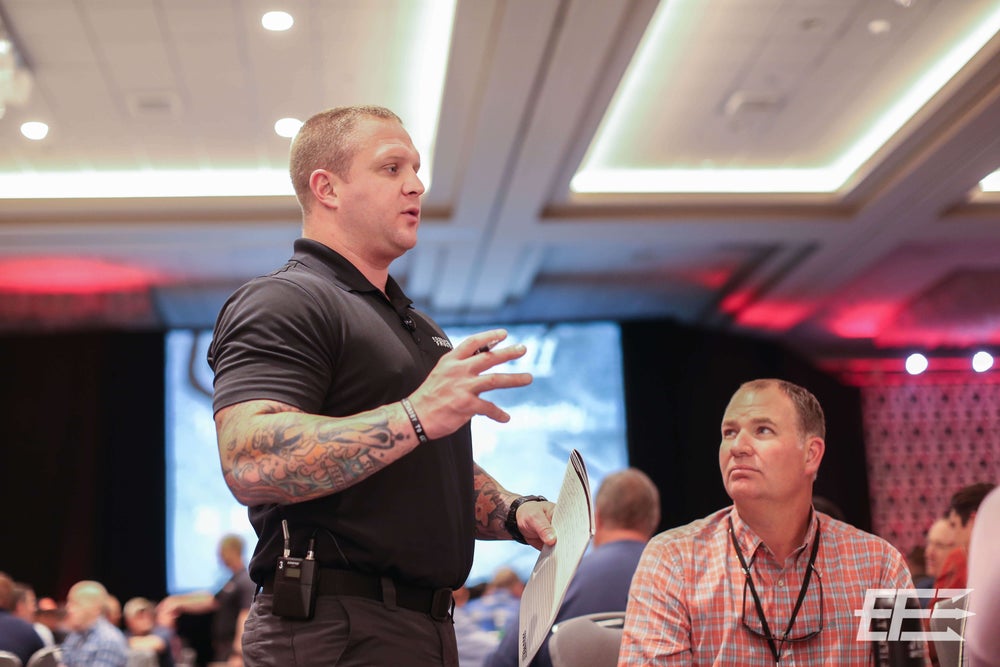 “You don’t make good decisions when you’re emotional,” says Willink. “If you are raising your voice or hitting the keyboard hard while writing an email, you’re too emotional. Don’t send that email. Instead, tilt your head back and take a breath. Control how you speak. Before opening your mouth, imagine you’re about to speak on the radio. If you appear flustered, that sends panic through your team.”

“Detaching gets you out of the weeds to make better strategic calls,” says Babin. “If your business is failing, the natural inclination is to go harder. But that’s the wrong strategy. You might be handling daily issues, but you aren’t developing future leaders. You might put out fires, but you aren’t taking time to analyze the problem so it’s not repeated.” 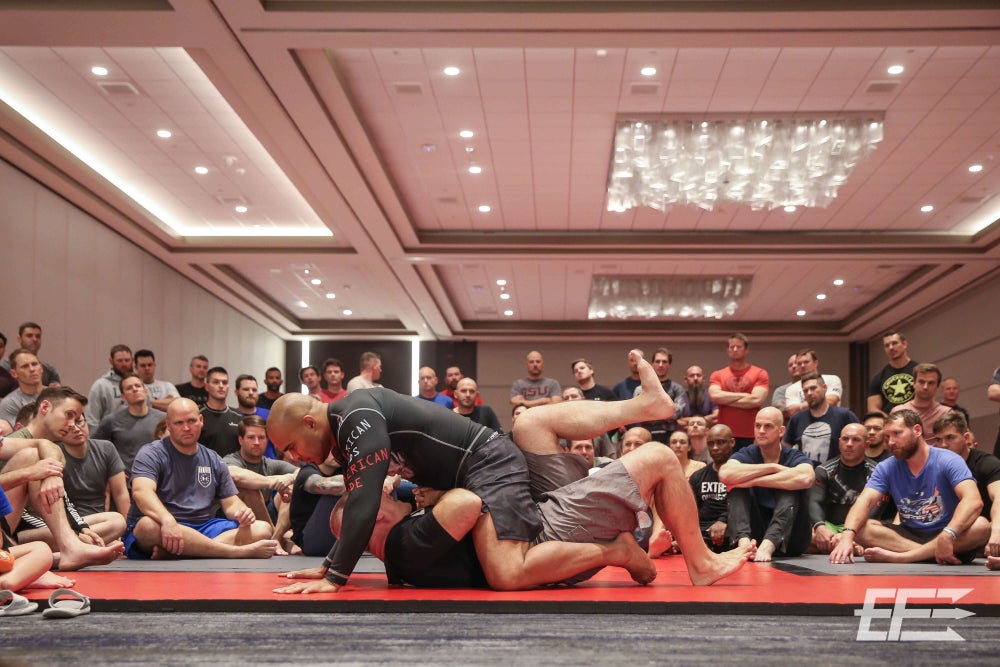 Jocko Podcast co-host Echo Charles leads a group through Brazilian Jiu-Jitsu, a sport which teaches you how to detach from your emotions.
Image credit: Courtney Henderson

“Finding balance is one of most powerful leadership skills,” says Willink. “For optimal team performance, leaders must be close with their people, but not too close. Maintain discipline but don’t become tyrannical. Don’t let things go, but don’t over nurture. Be detached but not so far removed from the front lines that you can’t make the right strategic calls.”

“If you care about your team, don’t ‘false cheerlead’ — it hurts performance,” cautions Babin. “Your duty is to let them know where they need to improve. Problems won’t go away unless addressed. You want subordinates to take your job eventually. But they can’t do that unless you hold them to a high standard.”

If you see someone’s performance slipping, ask them what’s going on and whether they have everything they need to do their job. “When mistakes happen, write them down and debrief with your team to ensure they don’t happen again,” says Willink.

“We always had a postoperative debrief — no exceptions — even if we’d been awake for 48 hours,” adds Babin. “This enabled us to adjust our tactics and ultimately save more lives.”

Day Two of MUSTER concluded with Brazilian jiu-jitsu. Black belt and world champion Dean Lister explained how martial arts like jiu-jitsu enhance your leadership skills: “Practice a physical activity that puts you in slightly dangerous situations but forces you to remain calm.”

Lister led us through several techniques before announcing an “open mat.” Anxiety built in my stomach when a jacked Jason Statham look-alike asked me to wrestle. Then I remembered Willink’s advice: Detach.

Statham quickly won the first round. Then I found my flow, and we wrestled for what felt like 15 minutes. Eventually, he won again. Exhausted, exhilarated, and dripping with sweat, we hugged. His intense stare turned into a smile. I realized that the anticipation is always worse than the challenge itself — especially if you use combat leadership principles to overcome it.

Click here to attend the next MUSTER. Click here to access one year of world-class leadership training. Click here to donate to America’s Mighty Warriors, which honors the sacrifices of soldiers, the fallen, and their families.

How To Increase Employee Responsibility — Regardless of Where You're Working

Stop Trying to Influence Your Team. Focus on This Leadership Skill Instead.