Amal Dokhan, Director, Babson Global Center for Entrepreneurial Leadership (BGCEL) in Saudi Arabia, on the Kingdom's reception to (and aptitude for) change.
Next Article Add to Queue

Amal Dokhan looks to be a rather busy woman these days- she can be found either devising a strategy for the Babson Global Center for Entrepreneurial Leadership (BGCEL), located in the Prince Mohammad Bin Salman College (MBSC) of Business and Entrepreneurship at King Abdullah Economic City, in her role as its Director, or teaching an experiential class on company creation at Prince Mohammed Bin Salman College where she is the Director of VentureLab, or delivering trainings in Arabic and working on programs aligned with Saudi Arabia’s culture with the World Bank team that she has been consulting with over the past few months. In addition to all that, she’s also teaching organizational and corporate innovation programs in countries like the USA, Canada, South Africa, Lebanon, and the UAE, while also making her presence felt as a speaker at events around the globe- and all of what she does has made her a very prolific woman hailing from Saudi Arabia. “Sometimes, you do see a surprise in people’s eyes [when seeing a Saudi woman expert and entrepreneur], but also the happiness and the support, ‘Way to go, girl, keep it up,’ but I always say that there are many women in Saudi like me,” Dokhan says. “It’s just that social norms are sometimes making women feel that they should not be visible. However, I think that Saudi women and all Arab women should be making themselves more visible today, in order to set an example for the upcoming generations, showing them that being a working woman is okay, that it actually means presenting yourself in the best way possible.”

Listing Dokhan’s current engagements is just a tip of the iceberg of all the projects she has been working on that actively contribute to Saudi Arabia’s Vision 2030 to diversify its economy. When it comes to change and innovation, Dokhan says, the process is not much different regardless of whether it is undertaken on a state or on a personal level, and its first lesson is one of acceptance. “For me to become more innovative, I need to unlearn and retrain myself to accept the new, and to see a different path,” she says. “I come from a very traditional upbringing and conservative schools, but with time, I have learnt how to throw myself from one fear to another. The trick is not to kill your fears. Everybody is trying to fight fears, but I say that fears are good, because if you are not afraid, you don’t have that engine inside. And after fear, there is always a reward.”

Dokhan was educated in Saudi Arabia and the UAE where she earned a master’s degree in strategic marketing from the University of Wollongong, but that was just the beginning. She went on to become a certified trainer in design innovation and change management by the World Bank, and also earn an executive certificate in design thinking from the D-School at Stanford University, as well as certificates on entrepreneurship and innovation from the MIT Sloan School of Management. To this day, her commitment to self-improvement has remained a constant. “I could easily say that every year, I train 2,000 to 3,000 startups, not just people, and I also do a lot of trainings in companies and universities, and I think that momentum of keeping all this going has definitely sharpened my skills,” she says. “It allows you to be able to deal with multiple people in different ways, and it gives you that international vision to be able to see things from different perspectives. Not many people have that, and maybe I pushed myself a lot, but I certainly have no regrets today.”

In 2016, Saudi Arabia announced its ambitious reform plan -Vision 2030- to develop a diversified economy with an emphasis on innovation and entrepreneurship. One of Vision 2030’s goals is to increase women’s participation in the workforce from 22% to 30%, and against this backdrop, Dokhan advises women to overcome the remaining internal obstacles as well, such as striving for perfection. “Women struggle with wanting to be perfect, and if we are not perfect, we don’t want to be seen, and that is what I focus on when working with women,” she says. “You don’t need to be perfect, just be good at what you do, and give yourself a chance to step out from where you are. Women need that internal confidence and peace inside to feel that we do have an impact. It is because women are so precise about the type of impact they want to make, they want to make sure that everyone will benefit, and they don’t want to make mistakes, but they should realize that even though they are not perfect, they are already having that impact.” 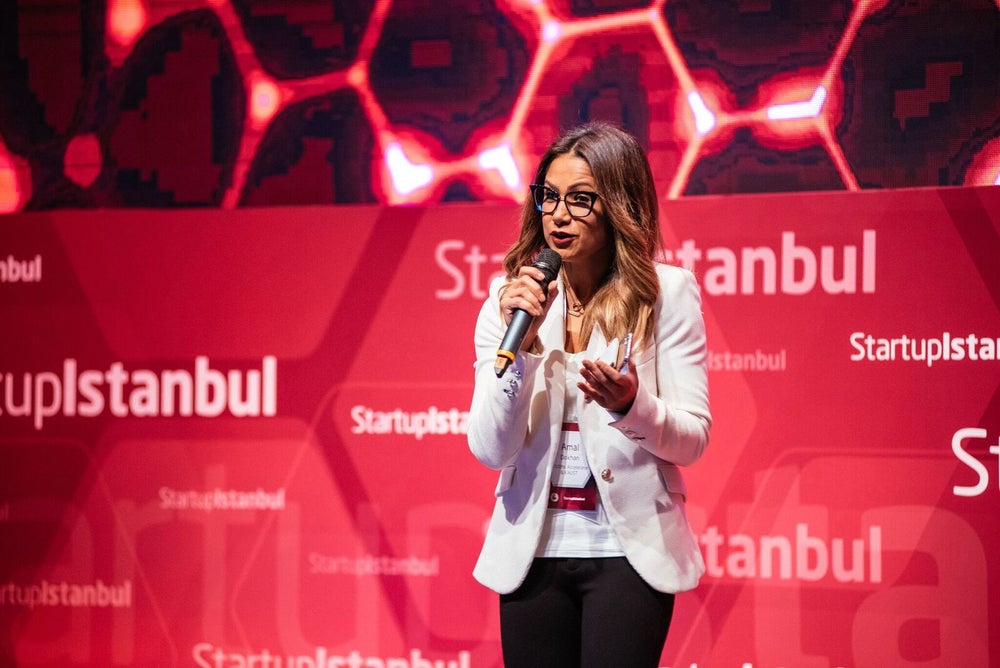 When Vision 2030 was announced, Dokhan was part of the Entrepreneurship Center at King Abdullah University of Science and Technology where she had multiple roles, including managing the university’s TAQADAM startup accelerator, and co-designing and teaching a course on entrepreneurship and technology innovation to master’s and post-doctoral students. However, that was not the beginning of her work on building a culture of entrepreneurship in the Kingdom– her career has also included stints at the KAUST’s Seed Funding Department and, prior to that, at the MIT Enterprise Forum (MITEF) Pan Arab, where she continues to contribute. “When we started, it was more about how we can guide these researchers and scientists into a more entrepreneurial area, to make them think of research on a more commercialized base,” Dokhan says. “We used to visit universities and talk with them about different possibilities, such as what one can do with an idea, what innovation and entrepreneurship meant, and to showcase success stories. So, when we first started, it was all about inspiring people to think in this direction.”

An important part of Saudi Arabia’s Vision 2030 is a reform of the country’s education system, with various initiatives aimed at encouraging students to achieve above average performance and increase their chances for future employment. Saudi Arabia boasts of a youth population of 60% to 75%, among whom the unemployment rate is very high. One solution to this is in Dokhan’s domain- entrepreneurship. “A few years ago, the Kingdom’s education on entrepreneurship itself was still early on, and most local businessmen were considered that somehow naturally -they had family businesses they would simply continue- but working on a new idea that would disrupt an existing system and market was not something that was so common,” she says. “Before that, all these [new startup] ideas were coming from outside. However, today, being an entrepreneur is something people aspire to be. Even when I recruit, companies ask me whether a candidate has had a venture before. That’s a change in the mindset, and it’s a complete shift. So, once the government has started injecting money and supporting all these initiatives, people have started internalizing the idea of entrepreneurship. Therefore, entrepreneurship education is now becoming a common thing in Saudi universities. To add to that, we have started pilots of having entrepreneurship curriculums even in high schools.” The topic of being open to change, she says, leads our conversation back to the country’s young population, for whom Dokhan advises a careful approach when choosing one’s career path. “One of the definitely interesting things that people look into today is whether entrepreneurship is better than a regular career choice,” she says. “We get that question a lot. I always say that transition is the best thing. Not even the best entrepreneurs in the world have taken 100% risk, so there should be a gradual thinking about the testing, the prototyping, the networking for that idea that you have, in order to see where it takes you before you actually make that jump. I would say that one of the interesting things is that, when we now go to high schools, students speak about entrepreneurship as if they were born like that. As much as it is interesting and funny, at the same time, it shows that they are looking at this as a natural phenomenon. It’s no longer foreign to them, as it was seven or eight years ago.” 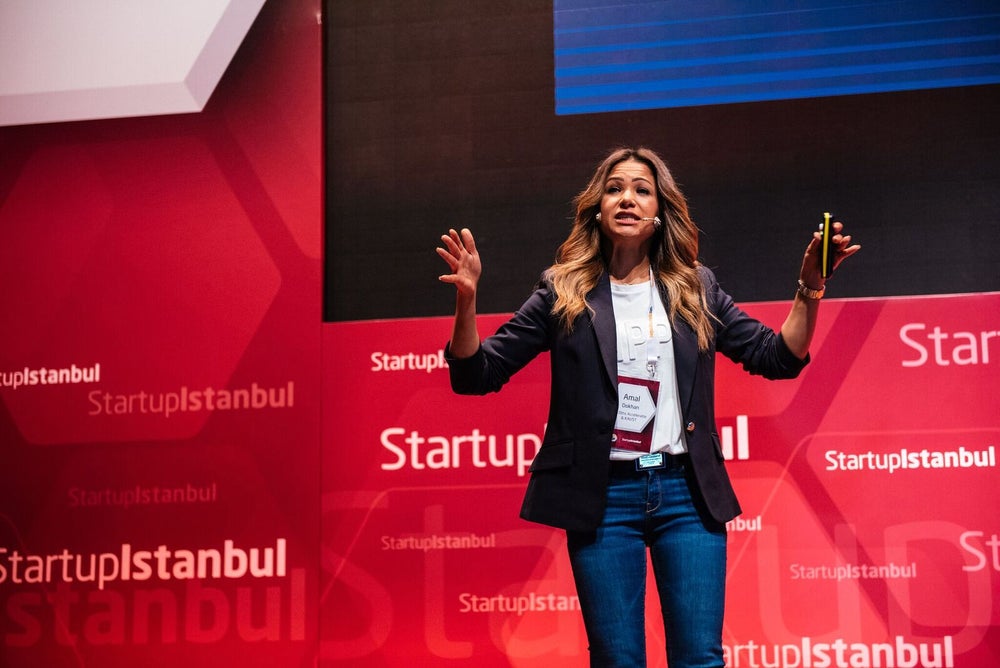 Following in the government’s footsteps, the funding for Saudi startups from both public and private sources has increased- MAGNiTT reports that the disclosed funding for KSA-founded startups rose from US$18.8 million in 2016 to $39.8 million in 2017. “There are also a lot of companies today saying that they are using Saudi startups rather than getting the ones from abroad,” Dokhan adds. “That is also a shift that, today, a Saudi startup is given more of a privilege. Even in the government betting, they are enabling them for local startups more than before. It gives those startups more hope, especially to those in the B2B business. And we want to see more B2B deals with startups, because we constantly need to teach them [B2B startup founders] that being in B2B means that it might take a longer time before the money gets into their pockets. For that reason, they have to learn how to diversify into other product lines which should help them survive those long periods of time.”

However, corporations, Dokhan says, are still riskaverse. “They still want to take things slowly,” she notes. “When it comes to corporates supporting startups, it is still not common, but if there is a benefit they will get out of that startup, they are willing to give it a little bit of support at the beginning, a deal or two to try them out.” One solution to this is making corporations themselves more innovative and inclusive of startup and SME ideas, which is also one of the key objectives of the Vision 2030- raising the level of SMEs’ current contribution of 20% of GDP to 35% by 2030. However, instilling a culture of innovation in bigger companies is not without setbacks. “In a corporate innovation setup, you have to consider many elements, including the stakeholders, the customers, and so on, and there’s much more at stake than when we talk with a startup of just two co-founders,” Dokhan says. “So, then, what we do is talk about the culture. It takes a longer time within a corporate that has been in business for 80 or 100 years; it actually takes us between a year and a year and a half to make those necessary steps to turn that business into a more innovative venture.”

In the long run, Dokhan sees Saudi Arabia as an innovation-enhancing country. “What used to be a difficulty before is now accessibility,” she says. “It was never a not attractive market, but the fact that people could not access it was a difficulty. Today, there is an encouragement for bringing startups in, getting funding for non-Saudi startups, plus the ease of doing business is attracting more people.” However, she ends our chat by inviting her fellow citizens to seize the opportunities in front of them. “When it comes to the capabilities of people, we don’t lack that, because we do have many young people who are really knowledgeable in certain areas, and the fact is that no one will solve our problems better than us,” Dokhan says. “All these international companies that came had to adjust and bring local teams on board, in order to see how to serve our market. I get many questions about how to navigate the Saudi market, so the fact that people are attracted to come here is an indicator for the people inside that there is a lot we can do today. With all the social, cultural, economic changes that are happening, we should enable our people to see all these opportunities more clearly, because we are inside this cycle, and we often can’t see.”

No Holding Back: Former Prime Minister of Australia Julia Gillard