By Pamella de Leon June 2, 2019
Opinions expressed by Entrepreneur contributors are their own.
You're reading Entrepreneur Middle East, an international franchise of Entrepreneur Media.

Today’s businesses face challenges such as rising costs and uncertain utility prices, along with being tasked to do more with less money and fewer resources. UAE-based solar developer Yellow Door Energy aims to address these issues by helping save money, control energy costs, reduce carbon emissions, and enhance customers’ sustainability objectives. “The ability for local and centralized solar generation has been steadily decreasing, while the cost of ‘plug-power’ -the cost paid for power someone consumes from the grid- has been increasing,” explains co-founder and CEO Jeremy Crane.

Noting that capital is often a barrier to implementing new energy solutions, Crane, along with Adenium Energy Capital, a leading solar investor in the Middle East, which has funded US$500 million in solar projects globally, partnered to launch the startup in 2015. “I believed then, and I still do today, that energy is best provided as a service,” says Crane. “This enables consumers to focus on their core business, while paying for the energy they need. We serve commercial and industrial businesses that share this philosophy.”

As the CEO leading the solar developer company, Crane, who has a Bachelor of Applied Science in Mechanical Engineering from the University of Waterloo, Canada, and an MBA from INSEAD in France, brings with him his past entrepreneurial experience to the enterprisehe has previously run four companies, with his first solar venture in Canada in 2009 developing and financing $40 million rooftop solar projects. “I believe that I was drawn to engineering, because I enjoy the challenge of trying new ideas, building on them until they became a reality,” he says. “The metrics of success in solar energy are easily measured: the impact on people (employees, customers), the environment, and the value creation through equity appreciation of assets.” With this mindset, it aligns perfectly with the enterprise’s two core offerings. 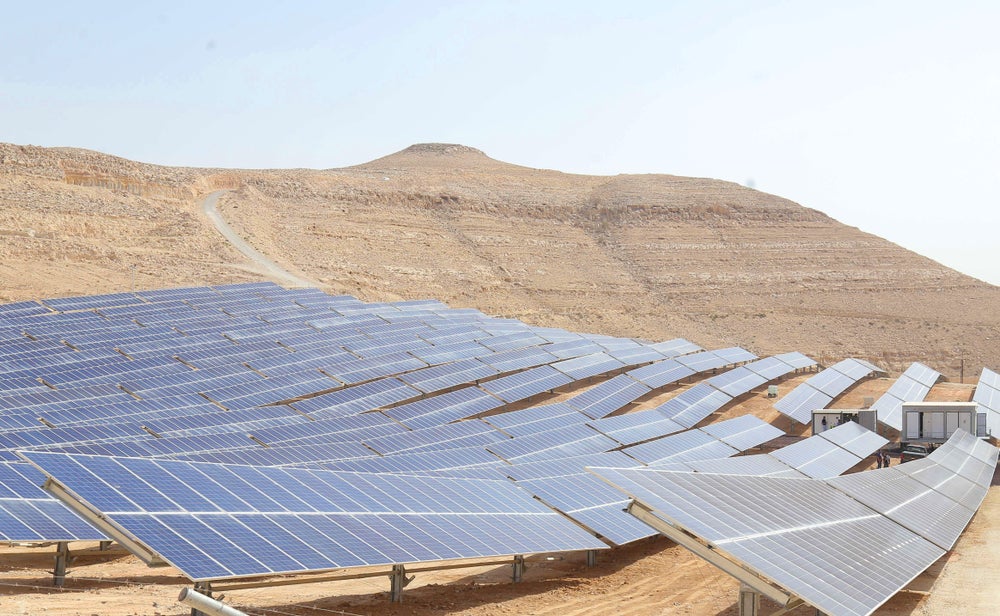 First is its solar lease- a performance-based long-term contract wherein Yellow Door Energy manages all stages of the solar plant from financing, to designing, procurers, building, operating, and maintaining the solar project. The customer pays no upfront investment, stays connected to the grid, and only pays a monthly solar bill once the solar plant starts producing electricity, with the customer being able to focus on their business, manage electricity costs on a long-term basis with a known solar lease payment, and also own the plant at the end of the lease. Next are its shared energy savings contracts, which Crane explains as a contractual arrangement between the customer and Yellow Door Energy, wherein the company takes in all the financing and operational risks to support the energy retrofit and manages the project with a qualified energy services company, and the customer pays Yellow Door Energy a portion of the energy that is saved.

Related: We Got Funded: Solar Energy Startup Pawame Crowdfunds US$543,000 In Debt Financing

Using their services, Crane notes that businesses can achieve savings between 15-40% off their utility bills. As for the business’ revenue, its profit comes from delivering reliable power for the duration of the contract. “By bundling the construction and lifetime maintenance together, and then executing very well, we can significantly reduce a customer’s long-term costs, more than if they build and own the system themselves. We’re also able to make a healthy margin in the process.”

With solar energy developers gaining traction in the Middle East, how does the startup outstand other players in the scene? Crane points out that they’ve seen an influx of inexperienced competitors entering the market without local industry knowledge, and even offering lower-than-cost prices to gain higher market share, tarnishing the reputation of the solar industry when they fail to deliver on promises. “Providing a long-term lease is more like running a marathon than a short sprint- you have to build to last.” Yellow Door Energy addresses this issue by focusing on quality construction and working with qualified contractors and suppliers. “We’ve structured our contracts so that our interests are aligned with our customers’. In other words, we get paid when our solar plants generate electricity, and the more solar power we generate, the more money our customers save,” Crane explains. 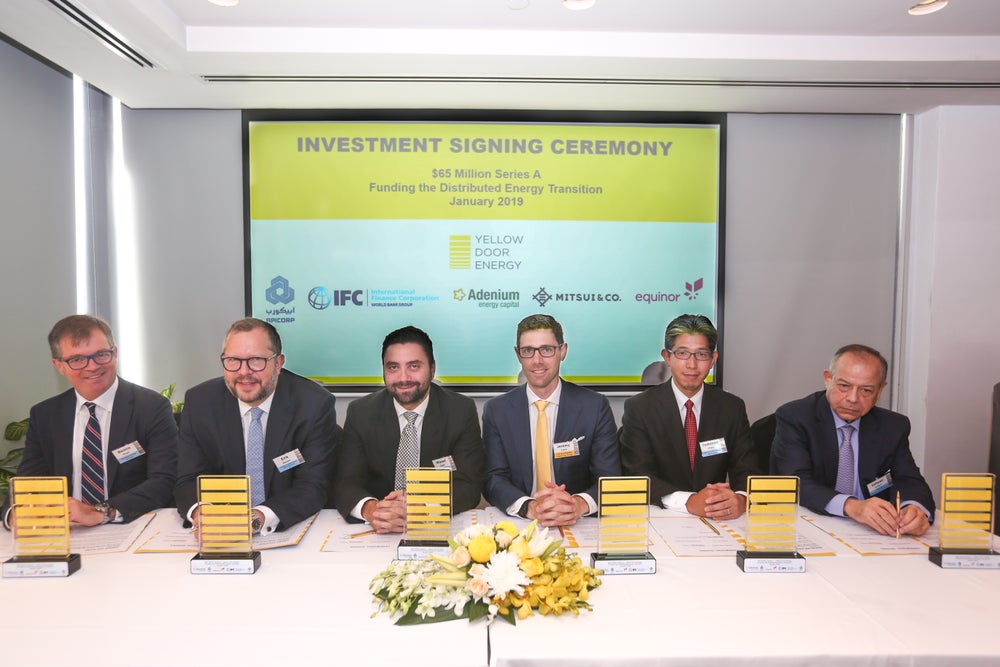 As with any enterprise, Yellow Door Energy has its own particular set of challenges too. For this startup, the evolving market regulations in the region have been constant hurdle. However, it’s interesting to note that Crane says the success of their business has despite a tightly regulated market. “Every change has an effect on our business. We try to work closely with the regulators to support them in structuring a sustainable market for all participants.” As a B2B business, Crane states that the credit profile of their customers is very important, so they’ve developed an in-house credit process for the team to ensure they’re working with the right customers.

Since it launched its first offices in UAE and Jordan in 2015, Yellow Door Energy has continued to grow its presence in both markets, signing their first customer in 2016. This was followed by the startup’s first seed equity funding round of $2 million, first debt financing round of $4 million, and it soon started generating revenue as well. In 2018, it raised additional seed equity funding, and also commissioned the fist wheeling solar park in Jordan, the Wadi Al Aash Solar Park with a capacity of 4 megawatts. As of writing, the company has more than 100 megawatts of solar projects in development in the UAE and Jordan, saving its customers between 10-40% of their utility bills on an annual basis.

Some of these include a 7.6 megawatt-peak project for Nestle Middle East’s, Nestle Waters’ and Kit Kat’s three sites in Dubai, plus a couple of rooftop solar plants at Dubai Investments Park, which include clients like Elcome International, Kamal Osman Jamjoom, Middle East Insulation, and Gulf Cryo. Crane praises the DEWA Shams Dubai program for its partnership as well- it is thanks to this program that its net metering (a solar incentive that allows you to store energy in the electric grid) scheme made solar leasing economically viable for the startup. The startup continues to gain the interest of investors too- it recently raised $65 million in a Series A round from five global investors, including International Finance Corporation, Mitsui &Co, Equinor Energy Ventures, Arab Petroleum Investments Corporation, and Adenium Energy Capital, which was the founding investor of Yellow Door Energy in 2015. It’s a pivotal moment for the young startup, as it not only marks as one of the largest investment rounds for a Series A, and particularly for distributed solar, but also, as Crane stresses, the type of investors behind the fund signals the global commitment towards renewable energy. “These are global investors with very large portfolios who have chosen Yellow Door Energy as a platform to scale their solar investments,” says Crane. 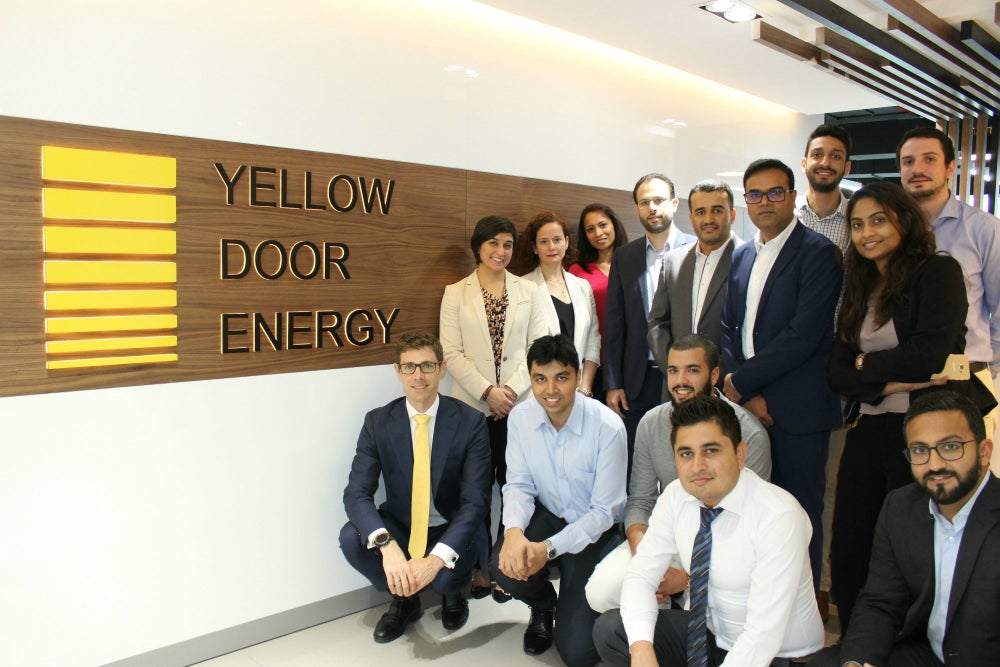 As the Yellow Door Energy continues to scale, Crane believes that focusing on people has a definite influence to a company’s growth. “We believe that fundamentally, a business is driven by its people, and ultimately, those people are driven by the company’s culture.” He reiterates that having a team with a culture of excellence, transparency and collaboration is the startup’s goal as it continues to build its workforce. With Jordan as a focal market for the startup, when asked what attributes made it an ideal fit, Crane points out how the cost of power and the regulations are the main drivers of the commercial and industrial sectors.

“The cost of power in Jordan is high for many industries, so they are motivated to utilize solar power,” Crane explains. Jordan was also the first company to put net metering regulations in place, along with wheeling- which is a process to allow solar electricity to be generated in one location, and purchased directly by a company or institution in another. In Jordan, Yellow Door Energy also purchases land and builds solar power generating assets that are directly associated with electricity accounts in urban environments. This allows companies or institutions that may not have appropriate land or roof space, such as a hotel or shopping mall, to enjoy the cost savings of solar energy.

Plus, Jordan also has a mandate goal of aiming for 20% of energy generation to come from renewables by 2020, and the startup wants to contribute to this target. Boosted by its recent funding round, the startup also has its eye on other markets to include the whole Middle East region, from Egypt to Pakistan (with an office opening already in the latter). The funding round is expected to cover their growth for the next 18 months. So, how does the team discern whether or not to enter a market? Crane says the main factors they look into are global horizontal irradiance, which is especially important for the solar photovoltaic (PV) business, economic stability of the country and ease of doing business there, favorable regulations for solar (whether net metering and wheeling are available), costs of electric prices and current solar PV installed, as well as any renewable energy targets the government has, which shows the nation’s commitment and possible future support for Yellow Door Energy.

On the startup’s future endeavors, Crane is keen on scaling the business by doubling their headcount, and entering two new markets this year. Calling the startup’s customers as its biggest champions, Crane reiterates Yellow Door Energy’s commitment to deliver solar projects on time and on budget. The company has an ambitious vision to power emerging economies reliably, efficiently, and sustainably, and yes, there’s an even bigger goal too: “Our long-term goal is to have $1 billion worth of solar assets in the region, and to be the partner of choice for solar and energy efficiency solutions. We want to Yellow Door Energy to be synonymous with solar and energy efficiency for the commercial and industrial sectors.”

Learn about the most common fallacies and mistakes businesses make

The Daily Grind Has Its Moments