If you're looking for fame and fortune, likeability matters more than the topic of your channel.
Next Article


YouTube popularity pays off. Its biggest stars earn around $20 million per year. But if you're looking to chase fame and fortune on the platform, the path isn't so clear.

A Pew Research Center study shows there's no clear category that guarantees views. The largest portion of views went to videos about video games, but even then that accounts for only 18 percent of all views. And while it's true that the highest-paid list is dominated by gaming YouTubers such as the problematic PewDiePie, categories that get 3 percent of views have YouTubers that far surpass him in popularity and earnings. 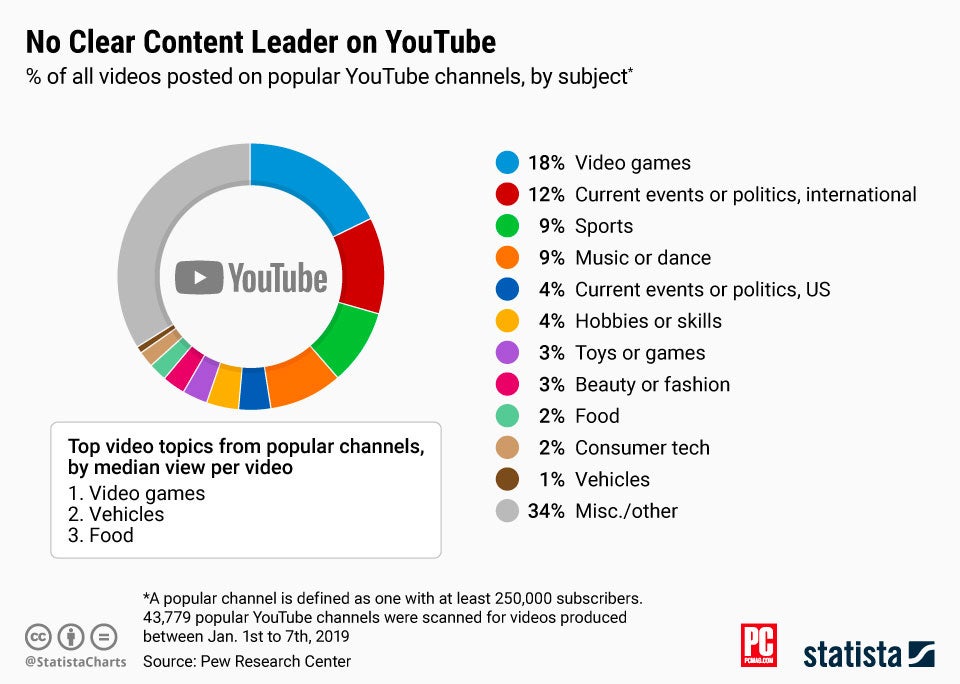 Toy videos accounted for only 3 percent in the Pew study -- but if you've been in a Target, it's impossible to escape Ryan's World. It's a line of toys from the 7-year-old Ryan Kaji, who is the highest-paid YouTuber, earning $22 million last year. He got his start when he asked his mom, "How come I'm not on YouTube when all the other kids are?"

Ryan's popularity, and really the popularity of any successful YouTuber, comes down to personality. Jeffree Star earned $18 million last year because of his beauty channel, which has also turned into a cosmetics empire. But Star started out on MySpace, promoting his music career and amassing the highest number of followers on the platform. His YouTube presence started with a switch to beauty tutorials, and he's only grown his audience since then.

Proving that a YouTuber's acclaim and following has to do more with likeability than topic is Emma Chamberlain. The 18-year-old made a name for herself vlogging the most mundane aspects of her day. Now she sits front row at fashion shows and gets cover stories written about her. Chamberlain's videos fall into the 34 percent miscellaneous/other category in the study, so if you want to replicate her results, remember one of the most successful TV shows of all time was a show about nothing.

How to Determine a YouTube Strategy and Core Message

6 Ways You Can Use YouTube to Reach Your Intended Audience