As the streaming war heats up with bigger companies launching their own set of services, MX Player's ad-based model could help it ward off competition in emerging markets such as India
Next Article

MX Player has raised $110 million in a new round of funding led by China’s Tencent, the video player-cum-streaming entity owned by Times Internet said in a statement on Wednesday.

The video platform—which has a monthly active user base of 175 million in India and 275 million worldwide—sold a majority stake to the digital arm of media conglomerate Times Group last year. Following the deal, MX Player transformed from being a video player that allowed local playback to offering over-the-top (OTT) streaming services.

Launched in February this year, MX Player’s OTT service is now live in five countries, the company said in the statement.

India would have more than 500 million online video subscribers by 2023, according to a report released in September by consultancy firm KPMG. 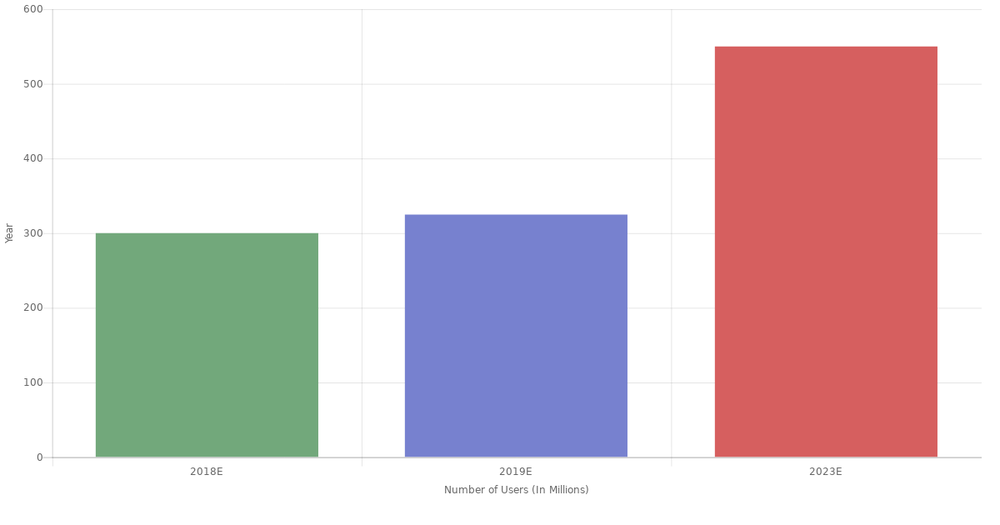 KPMG estimates the number of online video viewers in India will grow from a little over 300 million at 2019 end to more than 500 million in the next 4 years (Source: KPMG)

At a time when the likes of Disney and Apple are getting into the streaming space to compete with established giant Netflix, what helps MX Player’s case is it has an advertisement-based video-on-demand (AVOD) model, wherein users are not required to subscribe for a fee.

According to the KPMG report, 42 per cent of people in metro cities who use AVOD services are unwilling to pay for content, while 47 per cent are of the view that enough content is available for free.

Earlier this year, Netflix launched a mobile-only plan in India priced at INR 199 per month, cheaper than its basic plan that comes at INR 499 a month. The attempt, which Netflix later deemed successful, paved the way for the US-based company to unveil plans to try similar plans in other emerging markets.

The MX Player platform, apart from streaming from different networks, has also begun to produce its own original shows. It has an online streaming library of over 150,000 hours of content across 10 languages.

According to the statement, the new funds will used by MX Player to acquire talent, expand content base and tech development.

“As the smartphone user base continues to expand in India, we look forward to working with MX Player to further grow its platform by delivering original content and a differentiated user experience,” said Jeffrey Li, managing partner at Tencent’s investment arm.

Edtech Platform ApplyBoard Announces $300 Mn Investment Round With A Valuation Of $3.2 Bn