Global payments revenue in markets surveyed by Accenture is expected to grow to over $2 trillion by 2025, and banks can capture at least $500 billion of that, the study added
Next Article Add to Queue

If traditional banks in China don’t jump onto the digital payments bandwagon, they could risk losing as much as 13 per cent in payments revenue, or $61 billion, by 2025, to fintech firms that enable instant, invisible and free online payments, an Accenture study found.

Global payments revenue in markets surveyed by Accenture is expected to grow to over $2 trillion by 2025, and banks can capture at least $500 billion of that, the study added.

In Mainland China alone, payments revenue will likely grow at an annual rate of 9.1 per cent, to $494 billion by 2025, from $292 billion currently, and only banks that change their business models to adopt the latest payments technology, and focus on provide value added services to customers will capture a share of more than $200 billion in incremental revenue growth, the study suggested.

Traditional, institutional banks across the world in general have recently come under pressure from competition from new fintech firms, which attract customers by offering lucrative deals on payments and transactions, such as cashbacks, shopping points, retail discounts, airport lounge uses, and allowing all sorts of users, including those with risky financial profiles, to access their services.

Banks in the U.S. have seen their expenses skyrocket due to tech-spending, especially at a time when low market returns have forced them to turn to consumer banking as a way to ease bottomline pressure.

“The payments industry has been under a lot of pressure from new competition and margins will likely get squeezed even further because the world of instant, invisible and free payments is here to stay,” said Albert Chan, financial services practice lead for Accenture in China.

“At the same time, the payments market is booming and there’s a multi-billion-dollar opportunity for those willing to invest in new technologies and business models based on the new digital landscape ahead,” he added.

Digital payment companies and fintech firms which allow free payments on their wallets will also eat into fees banks earn from card payments as more users take to paying online at no extra charge to them, than using a debit, or credit card which attracts an annual membership, as well as transaction fees.

Free payments are expected to put over 5 per cent of payments revenue at risk in Mainland China, and 23.9 per cent in Hong Kong, where digital payments have not yet taken centre-stage.

Between 2015 and 2018, revenue from business credit card transactions dropped 33 per cent globally, while from consumer debit card, fell nearly 15 per cent, the study stated. From consumer credit cards, revenue dropped almost 12 per cent.

But the industry, globally, has woken up to the new reality of payments, and said the banking sector needs to rethink the way it has been conducting payments.

18 per cent of the respondent have said that the main priority for banks is to build security into retail payments, while nearly 22 per cent said AI, robotics, machine learning are key tech capabilities banks need to allow high-speed payments.

“The billions of dollars banks previously earned from some of these channels will dry up, so they’ll need to develop new digital business models to compete in this new era. Banks lagging behind risk being relegated to the plumbing of payments,” said Chan. 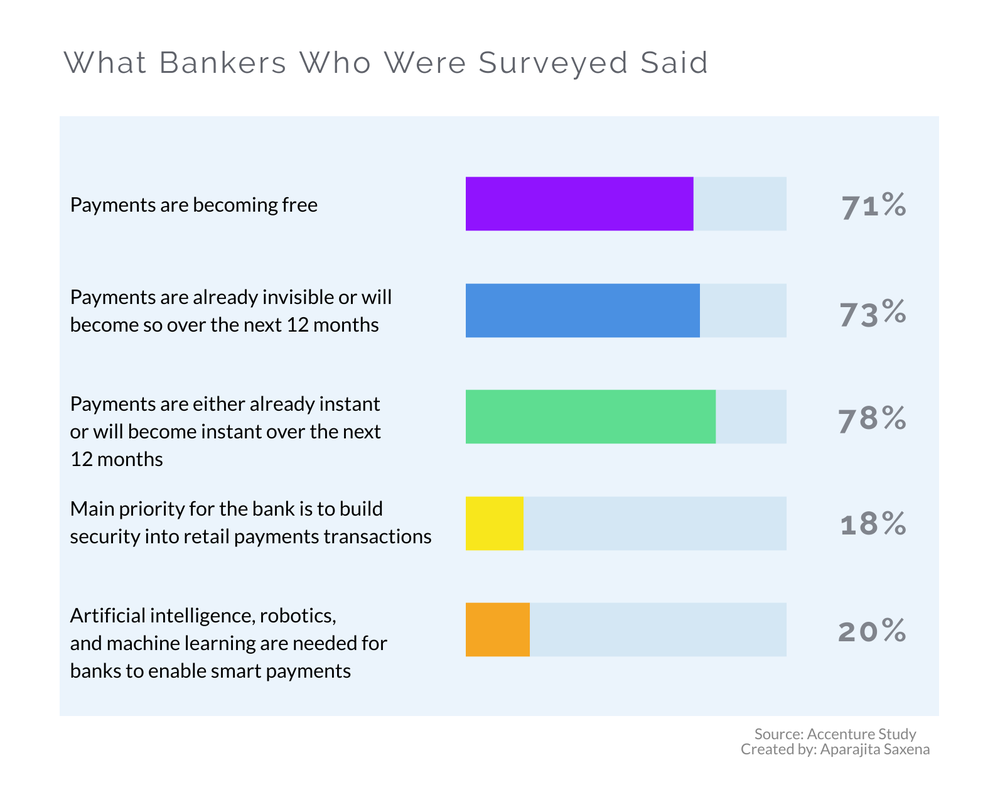 3 Ways Business Owners Can Prepare for Blockchain and Digital Payments

How Companies are Heading Towards Paperless Future