No Holding Back: Former Prime Minister of Australia Julia Gillard

The former Prime Minister of Australia spoke at the RiiSE Conference: Achieving Women Forum 2019 on her insatiable ambition for the creation of a more equitable landscape for women and men.
Next Article

As the stage got set for the last session of the RiiSE Conference: Achieving Women Forum 2019, presented by Accor, in association with Entrepreneur Middle East and du, it was interesting to see that the number of people in the audience did not decrease, as usually happens at business events. Of course, the reason for this was our guest speaker, former Australia Prime Minister Julia Gillard, famous around the world for her support of education, women's leadership, and mental health-related initiatives. “My life has taught me that there really are things that hold women back, so I’m hungry to see us get together, and clear those barriers out of the way, so that we can see many women come through into leadership positions in various areas,” Gillard said, at the beginning of a fireside chat with CNN anchor and correspondent Julia Chatterley and Accor Group Chief Digital Officer Maud Bailly. “Globally, in many areas, female leadership is lower than 30%; some statistics even show that it is close to 20%. So, I did want to make a contribution towards working out the best way to ensure that women can have equal journeys to men.” 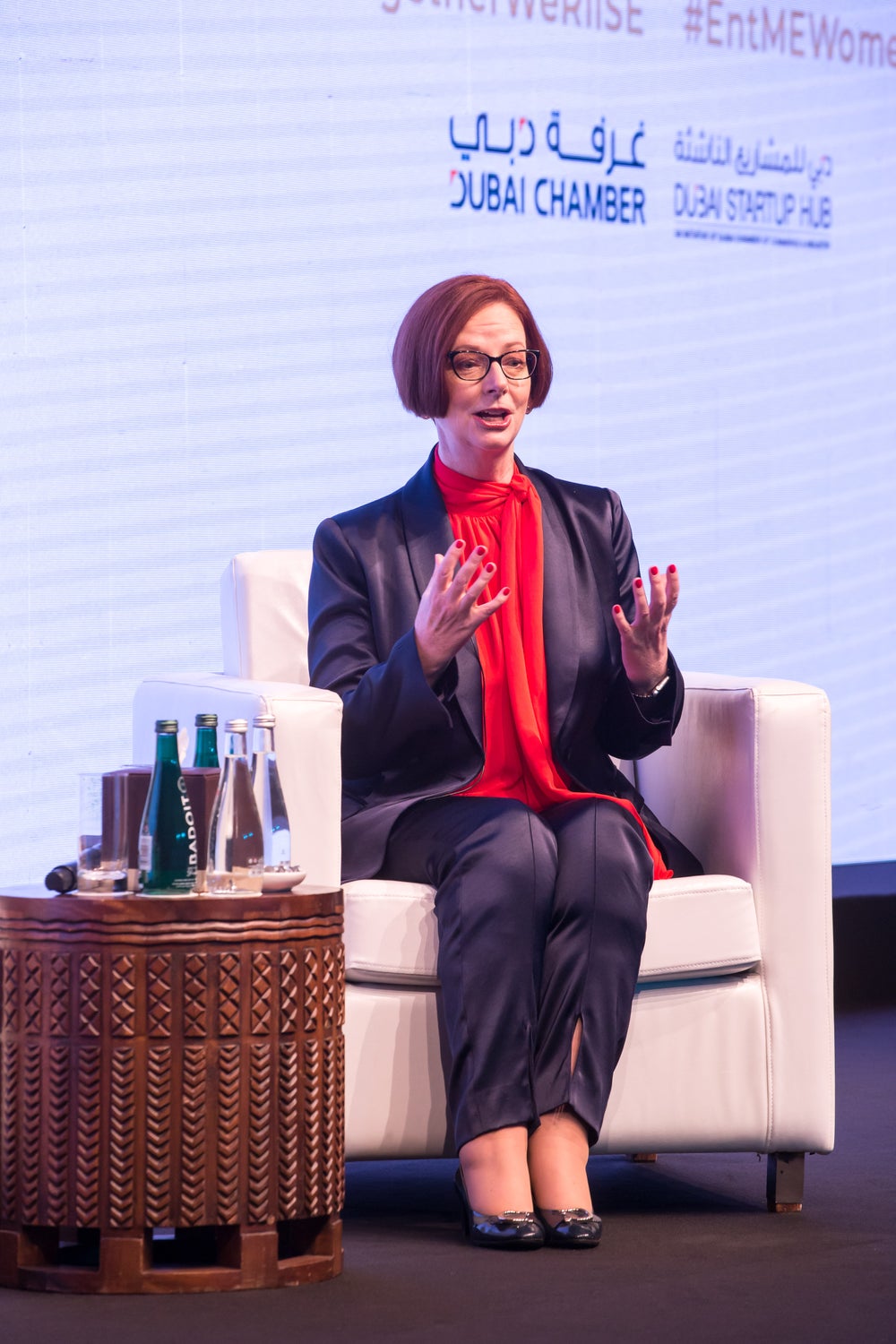 For those even vaguely familiar with Gillard’s career, it is not necessary to explain why she can talk at length about “things that hold women back.” Originally from Adelaide, Gillard earned a degree in law from the University of Melbourne in 1986, and started her career at a private law practice where she eventually made partner, specializing in industrial law. In the late 1970s, Gillard joined the Australian Labor Party (ALP) Victorian Branch, rising through the ranks to become an ALP leader, and in 2010, she was sworn in as Australia’s first female prime minister. Over the three years of being Prime Minister (PM), Gillard was repeatedly confronted less with reasoned arguments, and more with gender-based criticism. “While I was the PM, a degree of stereotyping was everywhere, but I thought that the worst reactions to the first female PM would be in the early days of my prime ministership, that there would be some people saying they were not happy with having a female PM, but then there would be politics as usual,” Gillard told the audience. “Yet, politics as usual in Australia is a pretty rough old show; however, I thought it would not be different from what former PMs had experienced. What I actually found was that the most gender-based reactions did not come at the start, but towards the end [of my term], and always when the government had some troubles. The go-to insults always had a gender component in it, so people would be demonstrating against a government policy, holding signs saying, ‘Ditch the witch,’ or how I should be put in a bag, and dropped into the sea. That left me joking that those people didn’t understand that they could not drown a witch like that, it wouldn’t work.”

Gillard became the symbol of women’s fight for gender equality after her famous misogyny speech against Australian politician Tony Abbott, who, at the time, was the leader of the opposition in the country’s House of Representatives in 2012, with the 15 minute clip having been viewed millions of times on YouTube. Recollecting the barrage of misogynistic attacks she had been facing at the time, Gillard said that she wished she had given them the dressing down they deserved when they started up in the first place. “It did get crazy, and one of the things I have learnt is that because I had not called it out earlier, it got harder to call it out later,” Gillard said. “So, lesson number one is don’t let it get crazy, start calling them out from the beginning. Lesson number two is that it is not necessarily about the woman at the heart of it that needs to be the person to call it out, because, in my case, if there had been a man to come forward and say, ‘We won’t communicate like this,’ it would have made a big difference. When people see a woman in this situation, they say, ‘Why isn’t she doing something about it?’ But what they should ask is, ‘Why am I not doing something about it?’ It takes all of us coming together, and making that change.”

Gillard shared the story of her tenure as prime minister in the memoir, My Story, published in 2014. Working on the memoir also prompted her to initiate global research into the ways in which gender impacts perceptions of leadership, which resulted in her becoming the inaugural chair of the Global Institute for Women's Leadership at King's College London. Throughout all this work, including her own podcast on female leadership, Gillard advocates against underestimating structural, cultural, and organizational barriers holding woback from top leadership positions. “I do think that the agendas of getting women to lean in, or about women behaving differently underestimate the structural barriers,” she said. “We’ve got to clear those structural barriers out of the way. To give you just an example of that, there was a wonderful experiment, which included regular meetings of male and female scientists, and the researchers watched their interactions in the room. They noticed that the women talked less than the men, concluding that it was a woman’s confidence problem. If we could get women to be more confident, they would speak more. Then, they looked deeper, and what they actually discovered was that, in that room of scientists, if a male scientist put forward an idea that was a bit right and a bit wrong, the dynamic of the meeting was to accept the bit that was right, and to collectively work on the bit that was wrong. But, if a woman put forward an idea that was a bit right and a bit wrong, it was dismissed. So, the women rationally learnt that unless they were 1000% sure that their idea was right, it was better not to speak. I think that there are many subtle things here that take us back to this structure, and how everybody is listening and receiving when women bring in their contributions.” Gillard also opined on the increasingly talked about issue of women not supporting other women enough, or at all. “Sometimes we do see a bit of that behavior, because we have all been schooled in the politics of scarcity,” she said. “A lot of times, many of us have been fighting to be that one woman who gets to be at the table, but now, we have to break out of that, and say that our fight really is not with the other woman, who is also trying to be the one woman at the table, but that our fight is against the system, so that there could be more women at the table.” 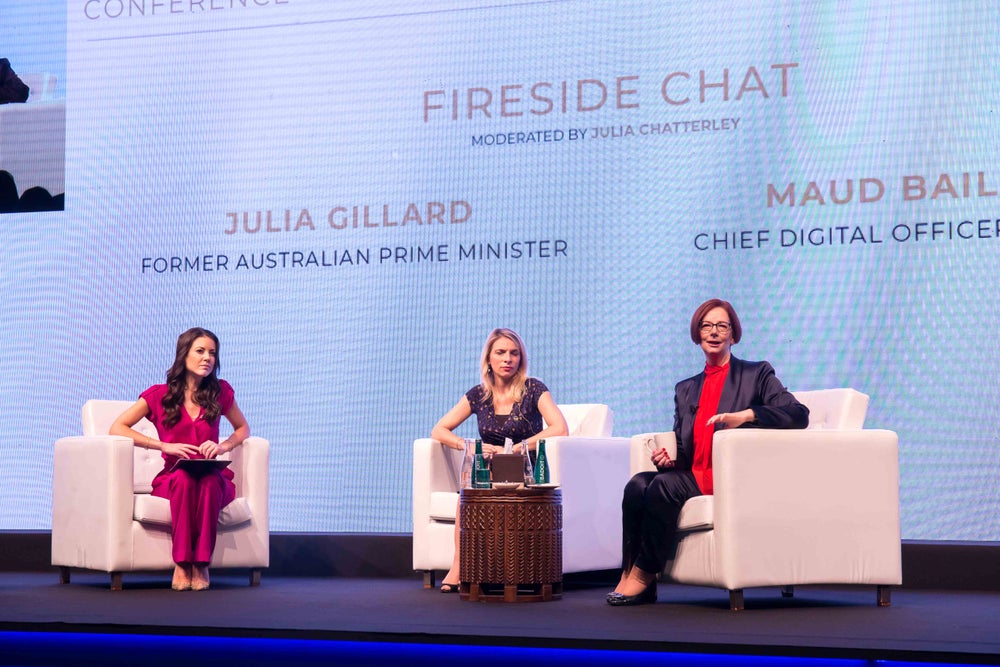 In connection to that, Gillard went on to point out the importance of establishing a culture in the workplace that is in full support of gender diversity. “I know from my own experience that you don’t change a culture, because you put one woman in a setting,” she said. “I won’t name the business, but it’s a global household name, whose chairman told me a story that they had had one woman on the board, and when they had been considering a multi-billion dollar acquisition, all the men on the board had been in favor of it, the management had been in favor, and the woman hadn’t spoken, but he had noticed, and interpreted her body language that she had had something to say. So, he had invited her into the conversation, and she had put in the argument that had made them all realize that it would have been be a multi-billiondollar error. He told me that what he learnt from that was that if they had more women, they could create an environment where women could more easily speak, and they would not be at risk of not getting that one opinion.”

In conclusion, Gillard is most confident about the younger generation who, she believes, “is going to challenge and change” the way the world works. “I am a real optimist for the future, because I think that today’s younger generation is thinking, is mobilized, is intolerant of gender inequality, or inequality in general,” Gillard said. “They are looking at today’s leadership generation, and already saying to us, ‘Why aren’t you doing better?’ Having said that, I do think we don’t just need not just to harvest that energy, but to use it for new purposes, and the toxicity of social media is one of the new challenges… One part of this agenda has to be how we deal with that kind of poison, and how we teach young women and young men to nurture a sense of self that isn’t going to be hostage to whether people are saying nice things about them or not.”

Related: The Recap Of The RiiSE Conference: Achieving Women Forum 2019