Only a few minutes into my conversation with One Global (Og) founder and Executive Chairman Mohammed Al-Rashidi, I find myself struggling to follow and keep track of his career so far, and that’s because this enterprising Kuwaiti national has accomplished and achieved so much in so many different, diverse fields that one can’t help but wonder what the rest of us are doing with our lives. From working in sectors as varied as telecom, fintech, and more, to launching and leading several startups out of Kuwait, Al-Rashidi, the winner of the Fintech Innovation award at Entrepreneur Middle East’s 2019 Enterprise Agility Awards, has been tapping into the pulse of the Middle East’s entrepreneurial arena for a long time now, and he’s showing no signs of slowing down anytime soon. 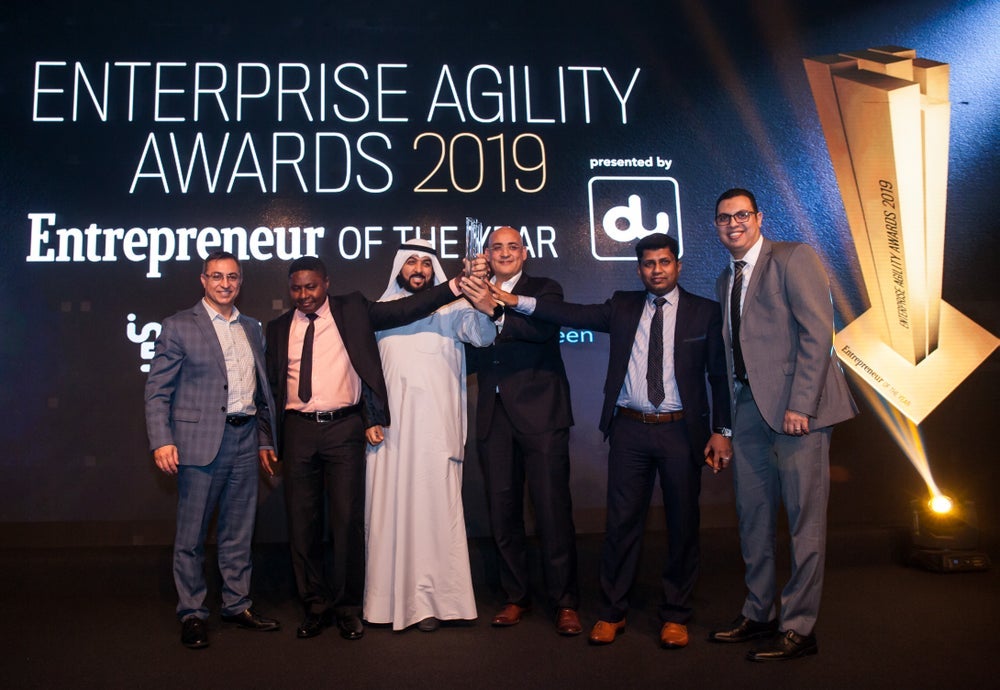 One Global, which Al-Rashidi characterizes as a digital transformation and innovation company, kicked off operations in 2004, and it today boasts of a global footprint in more than 16 countries across the MENA, Europe, and North America. Its offerings fall in the digital economy space, which include everything from supply chain finance and distribution, procurement, payment acceptance and collection, automation of settlements to bank accounts, cards, and wallets, and more.

At the same time, Og Global has also built a marketplace that provides capabilities and acceleration services to businesses across the spectrum, which include startups, SMEs, and large enterprises. With a range of ventures like Og Money (a mobile financial services and payment platform, formerly known as PayIt), Og Business (a digital payment acceptance and collection platform), and other such digital enterprises under One Global’s helm, it’s not hard to see why this diversified company bills itself as “an innovative solution provider with its premium digital services that elevate humanity with digital trends.”

As for Al-Rashidi himself, who also won the Digital Transformation Leader of the Year title at Fintech Galaxy's 2019 FinX Awards, he’s clearly in his element as a forward-thinking disruptor, and that’d explain his passion for what he does on a day-to-day basis. He recalls how, in 2010, he had put his company on a roadmap to become a digitally centered enterprise in the next 10 years, and now, as we inch closer toward 2020, Al-Rashidi’s sense of accomplishment is unmistakable as he reflects on how One Global has gone above and beyond in realizing that particular goal. 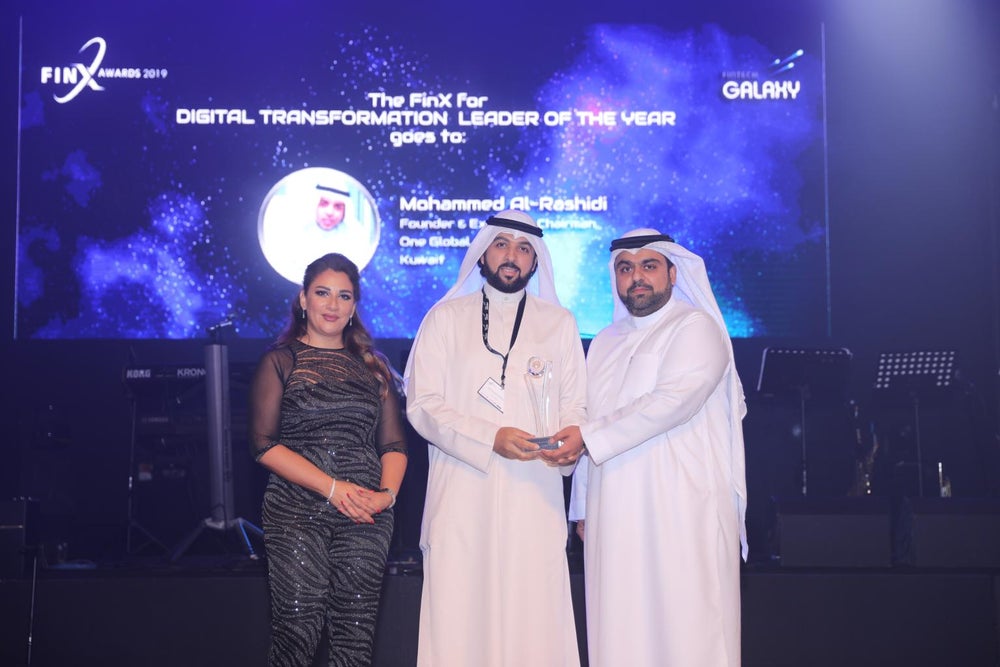 “We are proud to say that we are digital natives today,” he declares, pointing toward how One Global has carved out a unique space for itself in the region’s tech space by forging several of its innovations in-house, be it with its cloud technology, or through the slew of applications that have been developed based off it. Today, through his enterprise’s deep dives into artificial intelligence and machine learning, or with its experiments on blockchain and cryptocurrencies, Al-Rashidi is making it clear that he wants One Global to be constantly ahead of the curve when it comes to the adoption of new technologies, and thus ensure the business’ sustainability in the long term. 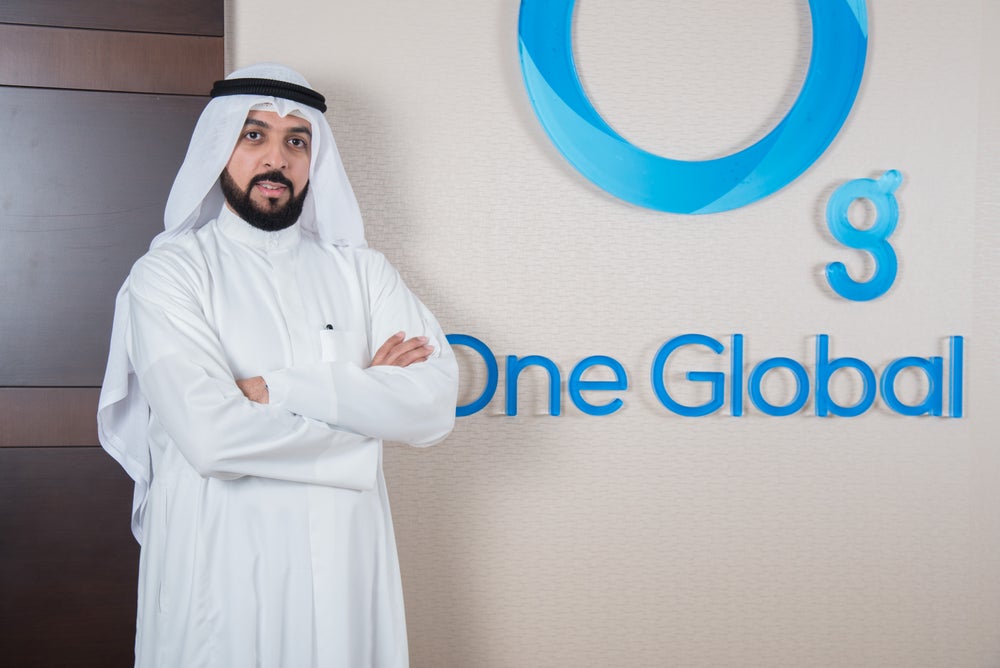 But it’s not just the revenue figures that are pushing Al-Rashidi ahead with his vision and mission of his enterprise, and this becomes apparent when he responds to a question about his personal driver for all that he gets up to with One Global. “Social impact,” he declares. “I’d like to help people live better lives.” At first glance, this might seem like a rather staid statement- but looking at what Al-Rashidi and his team at One Global have accomplished over the years makes it clear that this is not just a throwaway reply.

Consider, for instance, the company’s efforts (and wins) in the online payments domain through Og Money- Al-Rashidi and his team have essentially managed to change people’s behaviors in that, where they’d once have to physically go to a location to pay a particular bill, they are able to do such transactions now through a tap on their mobile phones. In fact, when One Global revealed its bill payment and top-up offering on Blackberry devices in 2009, it was a revolutionary concept at the time, with the company having been the first in the region to have actually launched this offering.

And if we are to look for someone to whom One Global’s forward-thinking approach to tech can be drawn back to, then it’d have to be Al-Rashidi himself, as it’s clear that he is setting the tone at the top for how his enterprise and his employees function. “It’s a good thing we are doing something that we are passionate about,” Al-Rashidi says. “We are feeling that we are having a value in people’s lives.”

Another example of how One Global’s offerings have impacted people’s lives can be seen in its foray into Sudan, where, in 2009, it had launched a mobile money transfer service called Saraf Mobile. The system, which allowed users to both make transfers and payments using their mobile phones, was a gamechanger on Sudan’s financial landscape, as the full potential of mobile remittances in the country hadn’t been tapped into until Saraf Mobile came into the picture.

Not only did the platform see itself being swiftly adopted by people in Sudan, Saraf Mobile’s policy of hiring people from the local communities to be its agents also resulted in an elevation in the standards of living for many in the country. “It was a totally new disruption,” Al-Rashidi remembers. “It was a big milestone in our company’s journey.”

At this point, for all of the achievements that Al-Rashidi can profess to today, it’s important to note that he has had to navigate a lot of twists and turns along the way. After all, while entrepreneurs in the region today can find themselves almost bombarded with support in the form of mentorship and funds, this was certainly not the state of the ecosystem when Al-Rashidi got started on his entrepreneurial journey. He’s had to go through everything from seeing his operations get shut down owing to issues with regulatory bodies, to realizing that, sometimes, the innovations he presented to the market were simply too ahead of their time.

Yet, it’s all of these experiences that have made Al-Rashidi the resilient entrepreneur that he is today, and they have also put him in a place where he can offer actionable advice to startups that are only getting started on their business trajectories. “Believe in your talent,” Al-Rashidi says, when asked to share the biggest lessons he has learned from his entrepreneurial endeavors so far.

He follows that up with a note for those wanting to be entrepreneurs to realize they don’t necessarily have to go out on their own to exercise that kind of a mindset. “You don’t have to be an entrepreneur- you can be an intrapreneur,” he says. “So, bring change inside the organization you are in today, so that you can find out what you are capable of first… Being alone out there, after all, is not easy. It needs a lot of skill and talent to do that.”

Now, given the professional and personal hurdles that entrepreneurs will have to face while on their chosen careers, Al-Rashidi also recommends that they make it a point to get the right kind of support along the way. “Pick the right partner,” he says. “This partner is the one who will be life-long with you. So, you have to pick the right partner to support you- not only to support you financially or work-wise, he or she will also become your coach and mentor when you have to move through tough times… You have to find someone that is always trying to push you up, not get you down.” 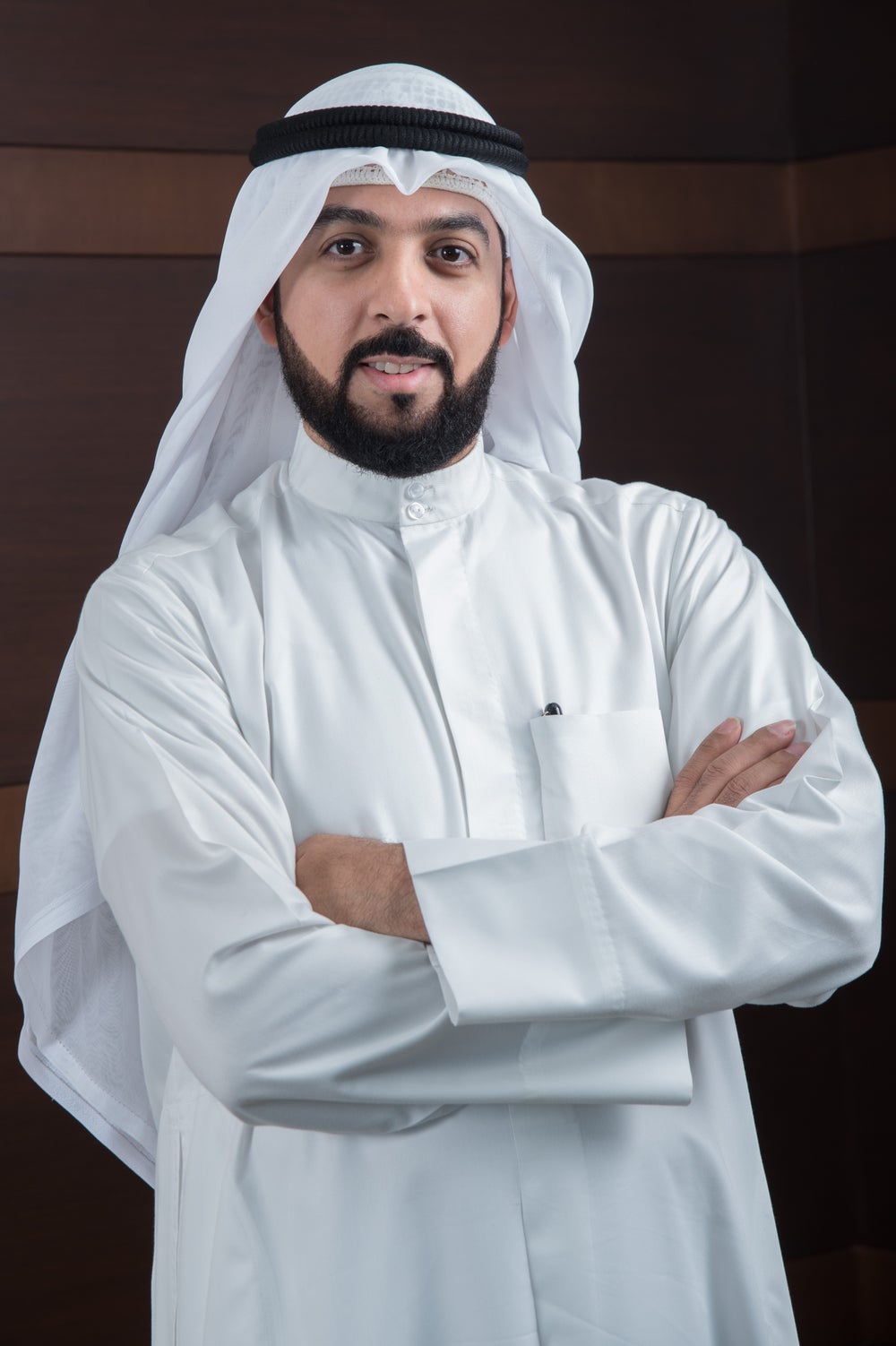 This is the same ethos that Al-Rashidi pushes through in his next bit of advice, which is something all worthy executives always mention when it comes to explaining how they went about building their successful businesses, and that essentially comes down to making the effort to build a strong, impactful team for your enterprise. (“That’s an investment that will pay you back in droves,” Al-Rashidi says.)

When it comes to his final pointer for entrepreneurs in Kuwait, the region, and beyond, Al-Rashidi looks back at his own career trajectory, given the number of years it has spanned, as a nod to what his peers in the ecosystem should gear themselves up for. “Patience,” Al-Rashidi declares. “You need to be patient. Success will come- despite the dark times you may find yourselves in, despite the fights you have to be in, despite the challenges you have to face… It will come, if you have the right team, if you have the right partner, if you believe in what you do, and if you are patient. It will come.”

As for what’s next for Al-Rashidi and One Global, the entrepreneur can’t seem to contain his excitement for the next stage of evolution his business is going to undertake starting from 2020. Among the tasks lined up is a major rebranding effort, with the creation of a new logo for One Global, which will then become the central theme from which all of the entities under the company’s banner derive their respective identities. On the business side of things, Al-Rashidi notes that his company, having realized the objectives laid out in its previous ten-year plan dating from 2010 to 2020, is now embarking on a new longterm strategy for One Global to govern its operations until 2025. When asked what is entailed in this new vision for One Global, Al-Rashidi replies, “We are going to offer smart life as a service, and that's going to be our company's mission for the next five years until 2025.”

Al-Rashidi also reveals that plans are already afoot within his enterprise to launch what he claims will be the first “super app” in the region, much like WeChat in China. He also adds that his company is also working on building a first of its kind decentralized financial services marketplace in the region, which, besides helping banks and other financial institutions to digitally transform, will also foster the growth of startups, by allowing them to expedite the launch of their digital financial services. With these just being a few of the many initiatives that Al-Rashidi is leading at One Global, it seems like he’s once again aiming to do a lot in a relatively short span of time- but if the success he has seen so far is any indication, it’s fair to say that the prospects for his new ventures look to be very good as well.