The Only Way Is Up: Chris Gardner, Author, 'The Pursuit of Happyness'

Life lessons from the The Pursuit Of Happyness author on starting at the bottom, and working your way to the top.

By Tamara Pupic January 15, 2020
Opinions expressed by Entrepreneur contributors are their own.
You're reading Entrepreneur Middle East, an international franchise of Entrepreneur Media.

In his twenties, and half-way through his years-long medical training, Christopher Paul Gardner was advised to rethink “that whole idea of becoming a doctor.” Ever since then, Gardner has been considering more lucrative career options. Today, however, he finds himself as the CEO of Happyness- in legal terms, that translates into “the founder and CEO of Christopher Gardner International Holdings.” Reflecting on that piece of advice he received all those years ago, and why he followed it several times in the decades that ensued, Gardner says, “I don’t believe that it is necessary to let go of the dream, but you might have to use different tactics. You also have to always be mindful of, ‘Is this what I want to do?’ Because only by doing something that you want to do, will you put your heart and soul into it. That’s what works for me.”

I had been worried that Gardner would be too tired for this interview- it had been a busy day for him at the 2019 Sharjah Entrepreneurship Festival. He had delivered an hour-long talk to an audience of hundreds, he had posed for photos with multiple fans during a book signing (Gardner is the author of two bestsellers, The Pursuit of Happyness (2006), and Start Where You Are (2009)), and he had had to also find some time to spare for a dozen journalists, including myself. When most of his official engagements were completed, he went out for a short walk, with his publicist and I waiting in front of the event’s venue, Sharjah’s Expo Center, but not even five minutes later, having inhaled enough fresh air, he sat down, words tumbling out.

With his fans in Sharjah, Gardner was friendly, entertaining, and clearly still very comfortable answering questions about The Pursuit of Happyness, a drama film based on his memoir that was released in 2006, starring Will Smith. The movie depicts a time in Gardner’s life when he was not able to make ends meet to the point of being homeless for nearly a year. To make matters worse, at the time, he was a single parent of a toddler, and an unpaid intern at stock brokerage and securities firm Dean Witter Reynolds. As most of you know (the movie was a box office hit, after all), the father and baby son spent their nights wherever it seemed safe, including at a toilet at a train station, but Gardner managed to pass all the necessary exams and become a fulltime employee of the company. 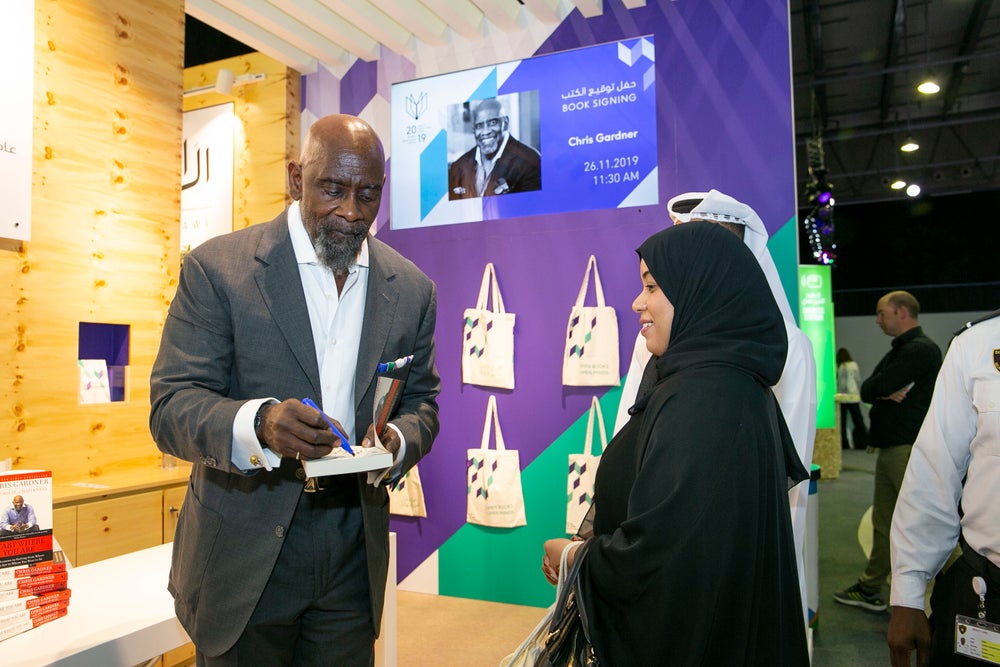 It certainly is a story that bears retelling; however, I was more interested in learning what happened after. “I spent my entire career in the financial services business,” Gardner says. “I started at the absolute bottom, I scratched, fought, and worked my way up to the absolute top. I loved what I was doing, and I had an opportunity to learn from the best in the business. I had an opportunity to learn how it’s done at its highest levels. The guy in the film who kept on saying to me, ‘Chris, go get me a coffee,’ or ‘Chris, bring a donut,’ that guy today is still one of my best friends in the whole world. He was in the business of managing relationships, and he was sharing with me the importance of having a sphere of influence. It means that nobody cares what you or your business have to offer, because everybody is good, and even if there’s a price difference between you and some other guy, the person with the best relationships is going to get the business every single time.”

Related: The MENA Startup Ecosystem Comes Together In Sharjah

Following a few years at Dean Witter Reynolds and Bear Stearns & Company, Gardner established his brokerage firm Gardner Rich & Co in Chicago in 1987. His Wikipedia page states that it started out of his small flat, with US$10,000 of personal savings, and one wooden desk “that doubled as the family dinner table.” From there, he built a company that he would, 19 years later, in 2006, exit with a multimillion-dollar cheque. “I was the best in the business, period,” Gardner says. “The people who worked for me, the traders who worked for me, had to know how. My job was to know who, such as, ‘Who’s going to make the phones ring,’ ‘Who are our customers,’ and in general, who was who in the relationships. That’s a whole different skillset. You can put a trader, anyone of those people, sit them at a table, and make them work, but I was the guy forging relationships. I was the guy who made the phones ring.”

I ask Gardner what he found to be the most difficult part of running a business in the fiercely competitive financial sector, and he says it was not dealing with the people outside, but inside the business, noting that “that he does not miss managing people.” Recalling the exact number, he says that he had a staff of 56. “What you will find out as an entrepreneur is that everyone who works for you has multiple personalities,” Gardner says, laughing. “I have always said that managing people is the hardest part of building a business, because not everyone is going to see your vision. You spend so much of your time selling your vision to the people that work for you, but that is a waste of your time. You are supposed to be selling your vision to your customers. Every entrepreneur has to always be mindful that for the people that work for you, it’s just a job, whereas for you, it’s your life. It was my life. Those are different mindsets and different mentalities.”

His decision to exit that business, Gardner says, might have been due to following the old piece of advice we mentioned earlier, but the people element had played a big part in it too. “I would not trade my 30-year career on Wall Street for anything in the world, but the business that I was in, the brokerage business, was changing dramatically,” he says. “And, although I had made a lot of money, I got fed up with trading. It was not necessarily something that I wanted to do anymore, and just as importantly, they were not people that I wanted to be in business with. As far as partnerships go, one of the most important things that any entrepreneur should always ask themselves is: ‘Are these people I can live with?’ If the answer is no, don’t do the deal, because that can make you miserable.” 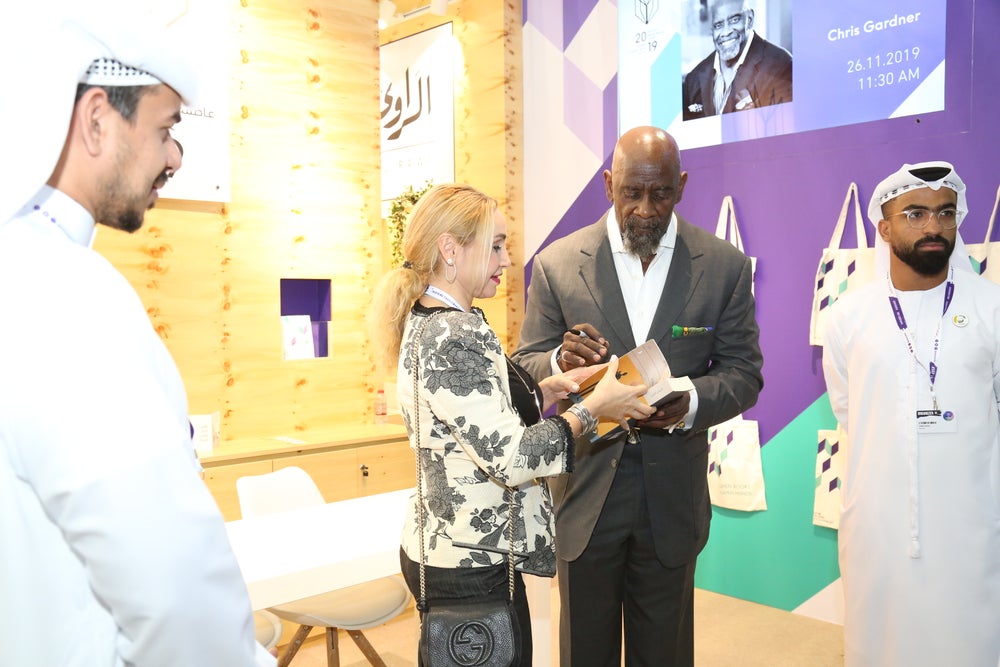 There was also a life changing personal experience, he adds, that made him wonder about what he wanted to do with the rest of his life. “Just because I was good at it, just because I was making money doing it, and just because I had done it throughout my entire professional career did not mean I had to do it till the day I died,” he says. This led him to publishing The Pursuit of Happyness, as well as launching Christopher Gardner International Holdings, a company that today roofs his different interests, including private equity investments and philanthropic work.

Written by Quincy Troupe, also the author of the biography of Miles Davis (“He was using the same microphone to interview me that he used to interview Miles Davis.”), The Pursuit of Happyness memoir took two years to be completed. Gardner describes the process as “very cathartic.” He says, “Let me tell you something, this was not an easy thing to do. Quincy was at 125th street in Harlem, and I lived in Midtown Manhattan, at 57th street. Every day, after a day with Quincy, reliving and going through all these things, I had to walk home, because I couldn’t be around other people. I would walk from 125th street up to the beginning of Central Park, 110th street, and then I would walk through the park, all the way to 57th street [approximately six kilometers]. That was a process of decompressing and letting go.”

As I listen to Gardner talking about that walk from 125th to 57th street in New York, a metaphor seems almost too obvious- in his life, no matter the circumstances, Gardner has seen nothing but the road ahead, never the road left behind. “All of us have these boxes of stuff in our heads, some of the boxes are marked ‘fragile,’ ‘caution,’ ‘do not touch,’” Gardner reflects. “When you take the lid off one box, that’s going to be connected to another box, and another box, and another box. You have to be willing to relive some things that you would probably rather not think about. But when you do it, you are not just in the process of letting these things go, and freeing yourself, but you learn that you are able to free others.”

Final question: did Gardner expect his book and the movie based on it to be such a hit? “I will never forget a conversation with my dear friend and mentor, Dr. Maya Angelou, at the very beginning of this part of my life, with the book and everything,” Gardner replies. “She told me, ‘Don’t worry and think about selling books, but think about connecting with people, and helping to change their lives. When you do that, all these other things will happen.’ She was so right.”

3. Use your time wisely “You always have to be mindful of: ‘What am I doing with my time?’ Time is the ultimate asset. It’s the one thing you can’t buy. You can make money, you can lose money, but you cannot add up more time to what you’ve got left.”