Australian company Bounce Inc has forayed into the Indian market and unveiled its first space at Infinity Mall, Malad, in Mumbai. Spread across 42,000 sq. ft, the trampoline park is an action-packed adventure space for every age group. While the concept sounds great, it is new to India. To understand more, Entrepreneur India got in an exclusive conversation with Antony Morell, Founder Director, Bounce Inc.

How did you come up with the concept of converting a trampoline park into a potential business?

My business partner and I have extensively explored the trampoline park concept and when we looked at the business, we found out that only five- and six-year-olds visit during the weekend but when we are talking about the concept itself, it was about taking what was exciting for children and making it available for adults too. Before it got started, I went and watched monkeys playing in the jungle of Peru, looked at how circus schools would practice and train, discovered how elite adrenaline and extreme athletes train, and saw the GoPro hot reel. We put that all in a blender, mashed it up and said what it would be like if we created a place where everyone in the world could come into a place that was supervised, temperature-controlled, staffed by incredible young people and experience this same euphoria.

What made you enter the Indian market?

We wanted to be a global business and you cannot be one if you are not in India because it has nearly a fifth of the world’s population. It’s a fascinating culture with dimensions that you can observe and experience which is certainly absent in the place where I belong to. A lot of things like yoga, mindfulness and more that started here are only now being discovered in the West. India feels like the home of humanity.

What do you keep in mind when joining hands with other partners and franchisors?

The first question is if we like and share the same fundamental values, see the world through a similar lens, get excited by the same things, respect and value the same ideologies. We then look at our vision for the business which we see as more of a movement than just a business. It is a place to get people physically active, express themselves and connect in a very human way. We want to partner with people who are inspired by those ideas rather than emphasize on the commercial outcome because we think those ideas are what drive the commercial outcome. We also find out if they have the skill-set and abilities to translate our model into their market with an intimate knowledge of their customers because we don’t know their customers.

Having started in Australia, what led you to franchise on an international level?

The business completely took off and wildly exceeded our expectations in 2012. We did our annual revenue; what we thought was an optimistic revenue target for the first year, we achieved in the first four months. The venue paid itself back really quickly as we had customers lining at the door. We had to put our publicity and advertising agency on hold before they had even started because we were so indurated with television interest and customer interest. We just started getting approached by people from different countries who wanted to take our brand, company ideology and model into exciting places around the world. So we didn’t have the capital, people or the skill sets to set up in countries we don’t understand. The most effective way of doing it from both a capital and logical point of view is just partners in these markets who are passionate and skilled with a good knowledge of the market.

What do you think is the future of Bounce across the globe?

Answering from a global point of view, we are excited that we have been able to take the model successfully into 16 countries in just seven years. There is growth and expansion just by the virtue of organic growth within our existing network but we are also excited about new parts of the world, areas of Europe such as Germany, Canada and potentially into the US market. That’s from an organic Bounce business model. We are also working on a couple of other concepts, different formats, and some marquee venues. There is one going in Dubai with a different concept and some small-format concepts.

How does the franchise model work?

In India, we have an agreement with our partner who takes over the territory. In this case, Anand Barot’s company has the whole of India and then I’ll have a programme of venues to roll out. There is a fee attached to the license for the country and royalty to use the IP and the business system. In terms of our ongoing relationship, our role is to make the experience, business system and all protocols consistent across the world so that we can support their localization. What we are constantly doing is refining, depending on how much market technobabble you want to get into and customer proposition for various segments.

What is the initial funding required to build a franchise of Bounce?

Talking about the same Anand Barot, director, and CEO, Bounce India said - To basically build a venue, it takes somewhere around 2 million USD, so that’s what is needed. Our plan is to expand to 7-8 venues in the country in 3-4 years and that’s what our expansion plan look likes.

What is the breakeven you are looking at? 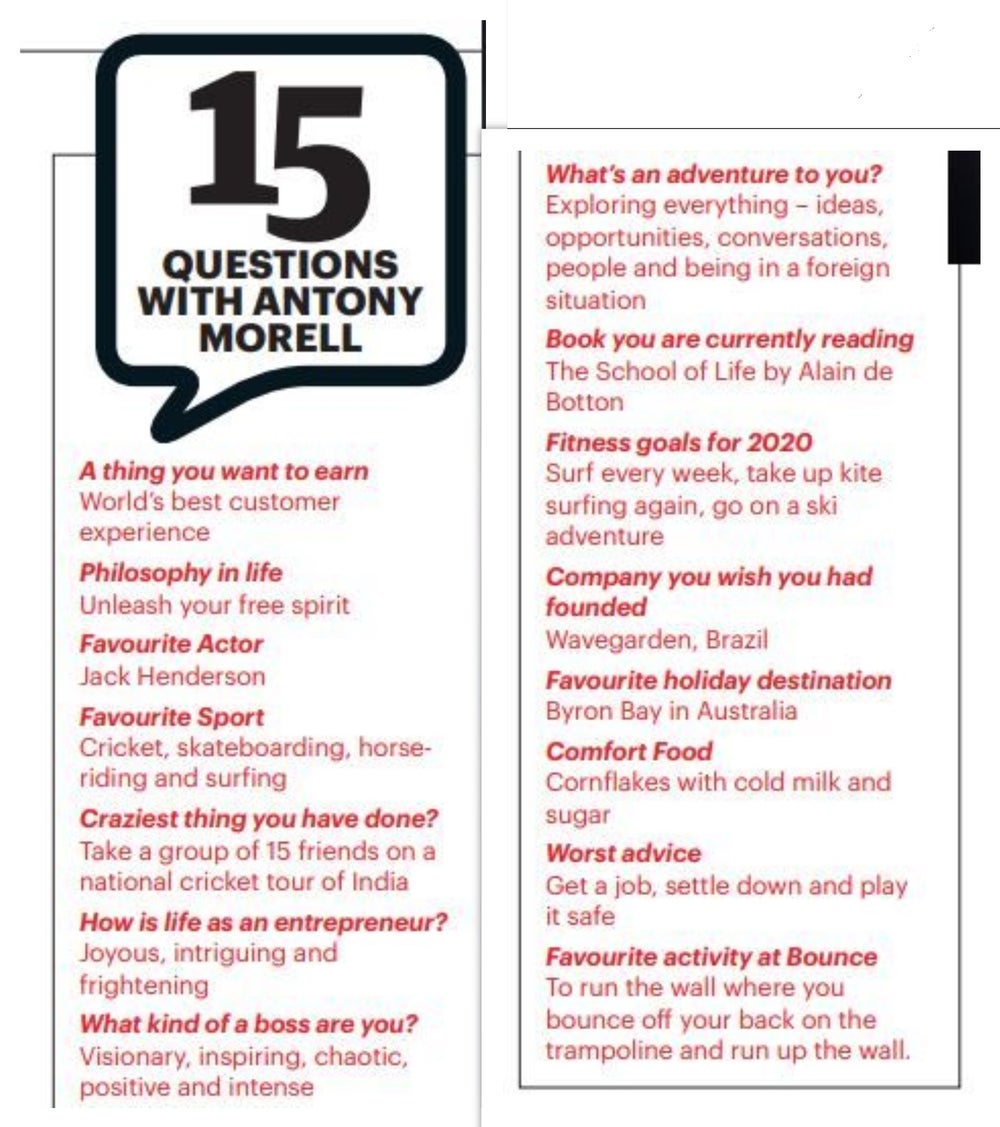 This Family Wanted to Own a Business That Got Them Excited, So They Opened An Urban Air Adventure Park

Franchises Keep Buying Up Other Franchises. Here's Why the Big Are Getting Bigger.

The Questions You Ask Yourself Determine the Answers You Receive

PharmEasy Closes Pre-IPO Investment Round Of Up To $350 Mn; Valuation Jumps To $5.6 Bn