The smartphone market in India grew 14 per cent in December quarter of 2019 with total shipments at 39 million units, according to Canalys

By Tahira Noor Khan February 3, 2020
Opinions expressed by Entrepreneur contributors are their own.
You're reading Entrepreneur India, an international franchise of Entrepreneur Media.

The six top performing mobile companies for the quarter were Xiaomi, Samsung, Vivo, Realme, Apple and Oppo. Except for Samsung (a South Korean company) and Apple (a US company), all other leaders are Chinese. This year, Apple recorded its best-ever performance in India. The spectacular performance is attributed to a cheaper iPhone 11 and the buzz around its dual and triple cameras.

“While the current slowdown continues to shroud the market with much uncertainty, the end of year surge saved the market from an otherwise poor first-half performance,” said Canalys analyst Madhumita Chaudhary. 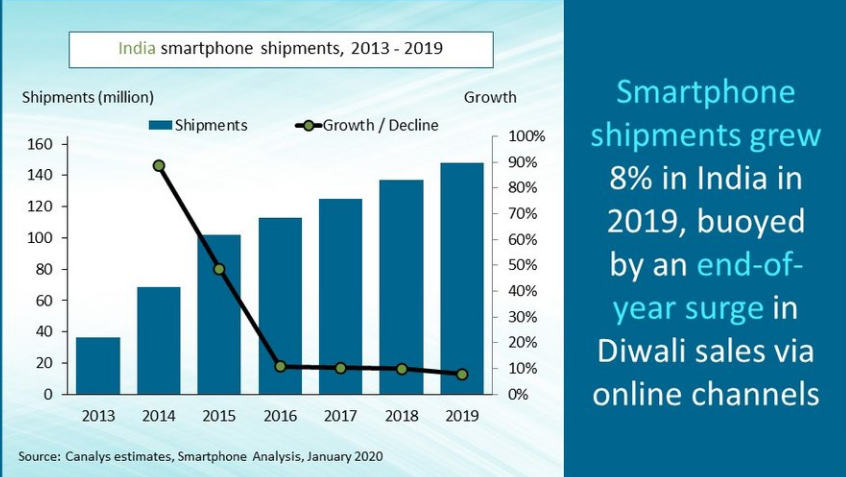 Xiaomi, which is the number one best performing smartphone in Q4, saw shipments rising 13 per cent to 11.2 million units. “The Chinese vendor shipped 42.9 million units for the full year, against 41.0 million in 2018,” reported Canalys.

The South Korean giant Samsung, despite having the second-largest market share, saw a dip from its 2018 performance. In 2018, the company closed the year with 35.4 million and in 2019 it came down to 32.3 million units.

Vivo, standing at number three, is predicted to overtake Samsung this year. “Its Q4 shipment grew 69 per cent, and full-year shipments by 72 per cent, by shipping 7.0 million and 24.7 million units, respectively.” 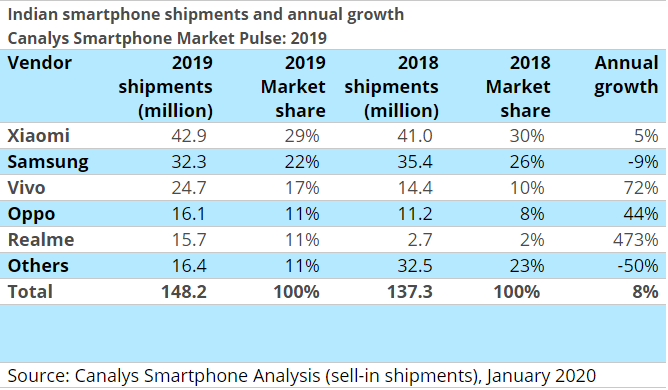 However, Realme at number four registered the highest shipment growth among all the players. It recorded an astounding 473 per cent shipment growth in the year 2019. In Q4, alone the vendor quadrupled shipments to 4.7 million units.

Also Read: Want A Loan? Now Xiaomi Has Something For You

The US manufacturing giant Apple grew by over 200 per cent annually and in Q4 shipped close to 925,000 iPhones. In 2019, Apple shipped 2 million iPhones compared with 1.6 million in 2018. Apart from its lower priced iPhone 11, the company’s partnership with HDFC Bank has also helped to boost its market performance. 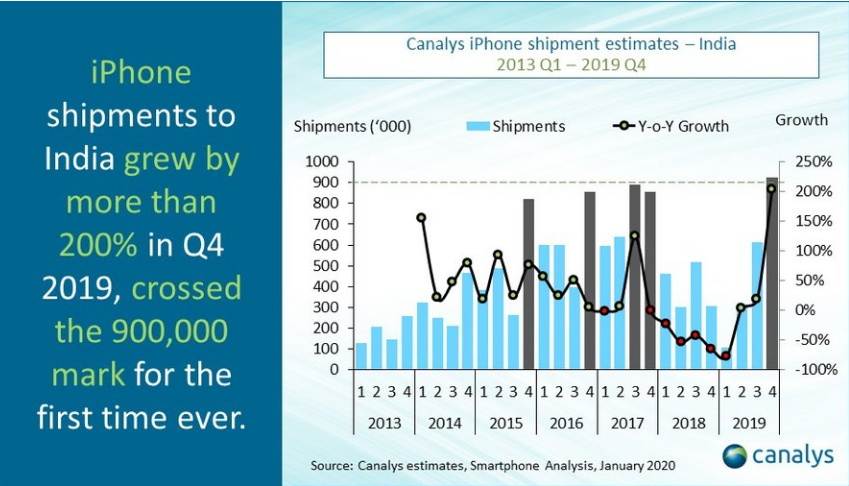 “The new iPhones have appealed not just to current iPhone users looking to upgrade, but also to value-conscious premium phone purchasers that are now presented with a formidable price alternative to the Samsung or OnePlus flagships,” said Chaudhary.

Canalys forecasts the Indian smartphone market to grow by 8 per cent in 2020, to over 160 million units.