Gender Pay Gap In the Gig Economy Is Narrower: Report

Female freelancers on average earn 84 per cent of what men earn across all fields, while the number is much worse in a regular job where it is 64 per cent.

By Tahira Noor Khan February 12, 2020
Opinions expressed by Entrepreneur contributors are their own.
You're reading Entrepreneur India, an international franchise of Entrepreneur Media.

Female freelancers earn better than women in a regular workforce, according to Payoneer’s 2020 Global Freelancer Income Report. A freelancing woman earns on average 84 per cent of what a man earns while, according to the World Economic Forum, globally, it is as low as 64 per cent for those doing a regular job.

Countries with higher than average figures of female freelancers are Phillippines (62 per cent), United States (47 per cent), Serbia (34 per cent), Argentina and Ukraine (both at 30 per cent). 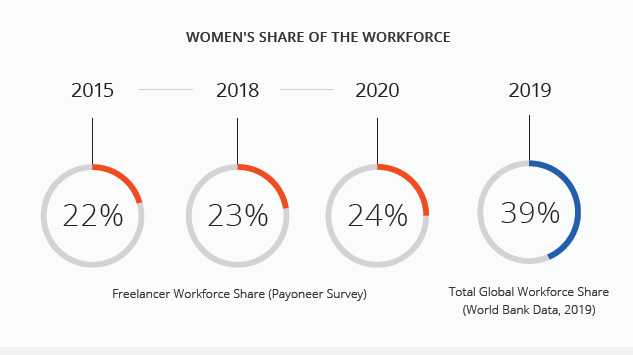 According to the report, the hourly rate charged by freelancers is more than what is paid to full-time employees. The report said that the worldwide average hourly rate charged by freelancers is $21, higher than the $19 average rate reported in Payoneer’s 2018 survey and significantly higher than the average salaries in several countries surveyed.

The individuals who work exclusively as freelancers earn a higher hourly rate and are more satisfied with their lifestyle compared to those individuals who split their time working for a company, said the report.

“New technologies make remote working accessible and more productive; online marketplaces and social media networks provide new venues for freelancers to promote their skills and find work; and cross-border payment platforms make it easier for them to get paid, regardless of where the client is and what currency they use,” said Eyal Moldovan, general manager at Payoneer.

Also Read: 10 of the Highest-Paying Gig Economy Jobs of 2019

Freelancing Attracts Millennials the Most

However, it found that experienced freelancers over the age of 55 earn more than twice as much as their 18-24 year-old peers. 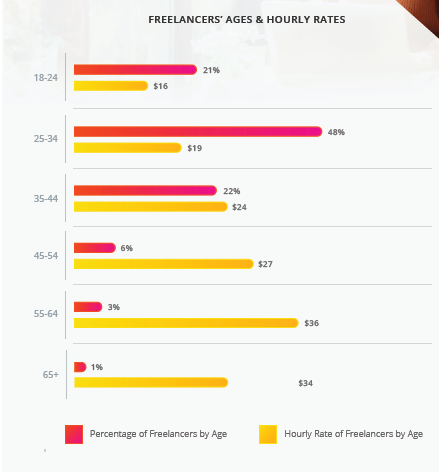 “Freelancing is booming around the world, driven by the growing global generational shifts,” said Moldovan.

“Meanwhile, older generations find freelancing a way to stay relevant, and to keep their skills sharp in a world where technology trends and tools change in the blink of an eye. Overall, both freelancers and companies benefit, and what once seemed a novel pursuit has redefined the very nature of the workforce,” he added.

The report is based on a survey of over 7,000 freelancers from across 150 countries.