By Shreya Ganguly February 17, 2020
Opinions expressed by Entrepreneur contributors are their own.
You're reading Entrepreneur India, an international franchise of Entrepreneur Media.

The Indian hospitality unicorn had a rough time in 2019 with reports revealing the instances of hoteliers, police complaints and protests against the company. Amid difficult times, OYO Hotels & Homes global consolidated revenue stood at $951 million for FY 2019 (April 2018 to March 2019). This marks a 4.5 times year-over-year growth  from FY2018 when the company reported a revenue of $211 million.

According to the official statement, OYO’s India revenue for FY19 stood at $604 million. While the unicorn recorded growth in its revenue, the company also widened its global net loss percentage from 25 per cent in FY18 to 35 per cent of revenue in FY19 to $335 million. The company attributed the result to the inherent costs of establishing new markets, including those related to talent, market-entry, operational expenses among others.

However, in mature markets like India, the company reduced its losses from 24 per cent to 14 percent of revenue in FY19 to $83 million. 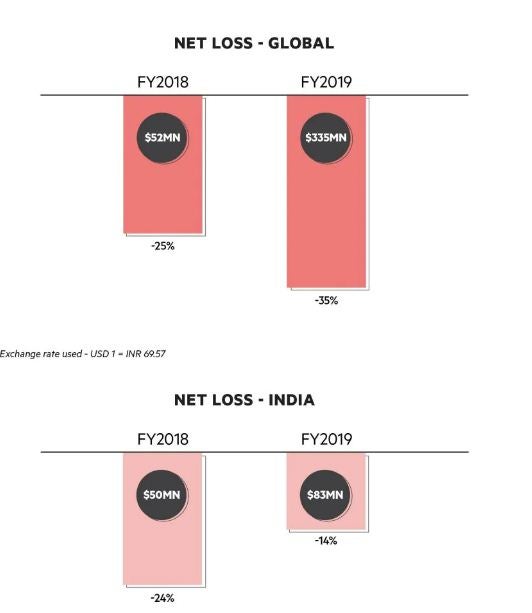 According to the company financials, India contributes to 63.5% of fiscal revenue while International markets generate 36.5% of total revenue. Interestingly, over 90 per cent of revenue came from repeat and organic user base with repeat alone contributing to 73 per cent of revenues.

According to the official statement, OYO also reported an increase in both daily guest check-ins across its network as well as an increase in hotels and asset owners across the world. With more than 43,000 asset partners, the hospitality giant hosted over 180 million guests from  over120 nationalities between January - December 2019.

“The company’s increased focus on corporate governance and building a high-performing and employee-first work culture will also drive this next phase of sustainable growth for us. We look forward to adding value to the experience of travellers and asset partners across the globe,” said Abhishek Gupta, Global CFO of OYO Hotels & Homes.

Last month, reports revealed that the SoftBank-backed hospitality company is notifying thousands of staffers individually about their status in the organization via emails. Around 200 employees from Delhi were laid off on January 13, 2020.

The layoffs are part of the company's new strategic objectives for 2020’. Prior to this, reports also revealed that OYO had fired about 5 per cent of total 12,000 employees in China and laid off around 1,200 people in India.