The March Edition of Entrepreneur India's Digital Cover brings the most talented and reckoning force of entertainment and business Rana Daggubati- The actor, Entrepreneur & tech enthusiast

The image of Baahubali’s Bhallaldeva is still so fresh that thinking about Rana Daggubati as any other being can be a tough job. However, once you meet him in person, his off-screen persona can blow your mind away.

To start with, he not just rules the silver screen but also the boardroom. A tech enthusiast, you pick a field in this area and he has certainly invested there.

The March Edition of Entrepreneur India's Digital Cover brings the most talented and reckoning force of Entertainment and Tech Industry Rana Daggubati.

Coming from a family that laid the founding stone of the South Indian film industry, one might think things got easy for him in terms of nepotism. But his understanding of it is quite different than of you and me.

He very categorically says "I have a fully different understanding of Nepotism. I guess I am the product of Nepotism in that sense but here it meant you do everything yourself. So that's a completely different system." 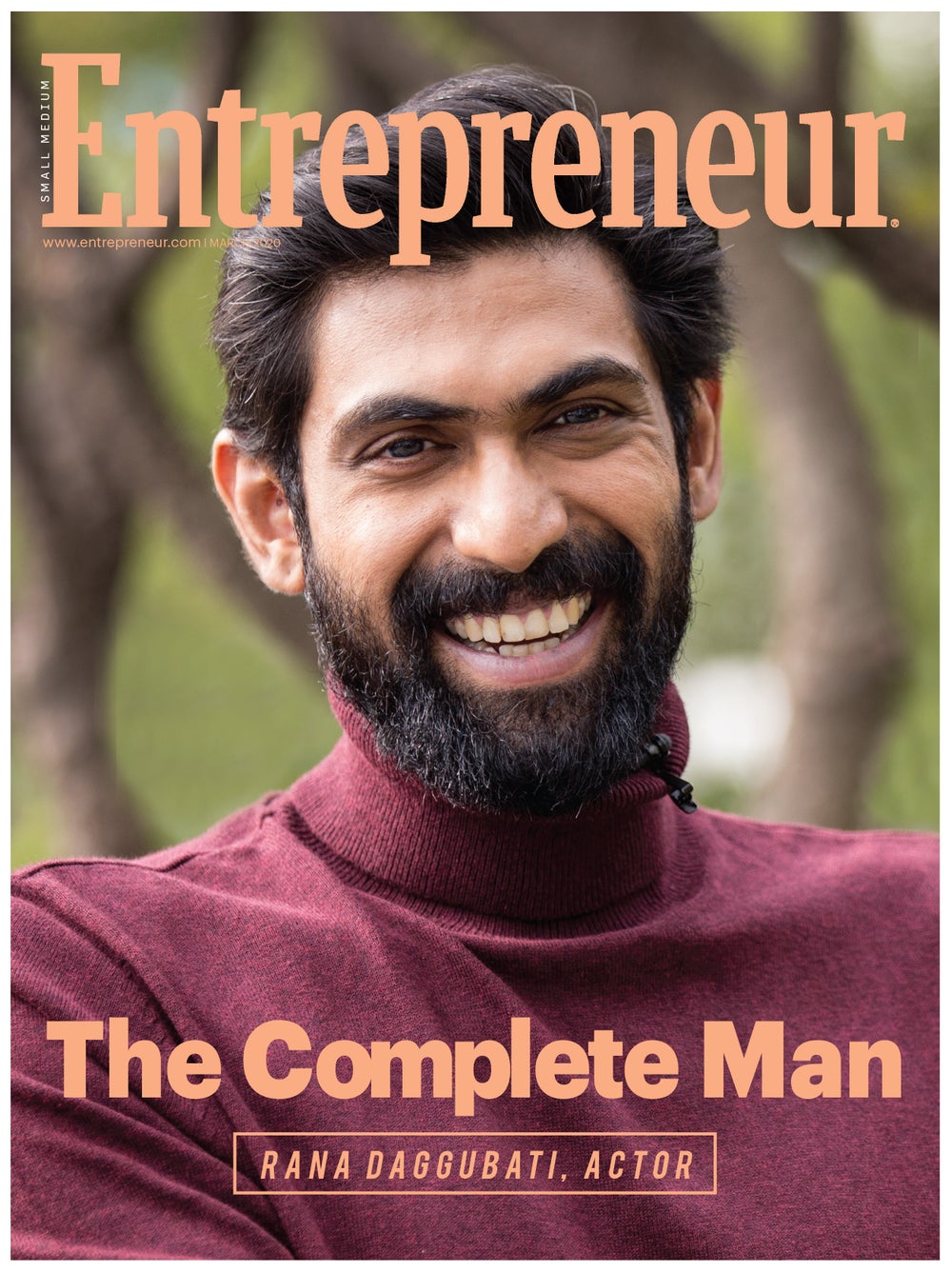 The Merger of An Actor & Entrepreneur:

He is an actor, an entrepreneur, a visual expert and much more. He is a serial entrepreneur who is out there trying different things with the sole intention to create great content. While many might wonder how does his creative and the business side work together?

In his terms both co-inside seamlessly and the whole possibility of it is because he is an actor.

"All of this wouldn't have been possible if I wasn't an actor. That's a guarantee. I wouldn't have been able to build anything or put projects together. None of it would have happened if I wasn't an actor. For me, it feels the same. There is a creative process to the things and then there is a business part. That's the only two separate parts. You do think in words sometimes and then you think in numbers," Daggubati said.

Having a special corner for tech considering he eats, breathes and sleep entertainment where tech plays an important role. He has made investments in AI, VI, blockchain, everything related to technology.

As per him "Blockchain kind of threw everyone out the hook when I was making that first investment. To me, I use the simplest form of blockchain. We are not getting into crypto or anything complex. It's a rights management that we have to build a capability of. Today the real ambiguity of things will start coming because the content is so much and aggregators are so many. You need one system that holds and registers film and says there is one format to it. Like we want merchandise and rights of it there is a certain value. We really hope we can do this in the International market that finally gives a producer a bigger and better way to sell his films. Everything we have done is either to improve the way we make films or the way we distribute and sell films. To me, it's the same circle of what I am trying to build.”

His latest venture- Urban-i is talk of the town simply as its idea was to associate with anything related to urbanisation space.

"Today we need tech for everything. You need fashion, skin and hair products that are different. Every product in our life is much more different than it used to be. The way we turn on switches, the way we read our morning news is different. There is a large urbanisation that is going on in the last couple of years. As Anthill ventures it was to create a program for everything that is happening in the urbanisation space, for international brands to scale up in India and vice versa. What we also have is the skill to put talent with these brands. I think that's the gap we are trying to fill with Urban-I," he said.

The Responsibility of Making Great Movies:

When you are popular and have access to everything. One might assume things become easy. However, it's a two-way sword. Sometimes when you sit in the office, you just hope that somebody gives you a great script and there is a different producer for every movie and one can just shoot. That's the hope, Rana states.

"The king of films I have done is very different. Between Baahubali and Gazi Attack, I know no matter how long I keep my doors open no one is going to walk in with it as a story. We found an independent filmmaker and made a feature film out of a short film. Something like Hiranyakashyap, it's not a film that will walk into your door. You got to work on it and make it happen. When you are part of a studio structure making things happen becomes very very important, that becomes your responsibility whether or not you want it," he explains.

Having tried a variety of things over years now, the actor and businessman understand the importance of making a cost-effective film. And to achieve the same, he shares how prep is the ultimate key.

"Getting the writing correct. Getting the pre-production work done correctly. Often enough we spend very little time prepping and that's why most things go wrong because we are not equipped for the problem. Over the last two years, we have made prep a very important function. We have moved and delayed timelines, it doesn't matter. A here and there lesser releases didn't scare us at all. We are building a system so we can work at a faster pace. Prep has become an important part of it and we are using a lot of tech- game engines to prep for feature films action sequences. See most of the time things changes when you start thinking on the sets because you are not prepared for it," he said.

Having said, a thing that makes him stand out from every actor out there is his vanity proof nature and what is called is just a marketing tool.

"I work in a studio, unlike anyone else. Here's where the distribution happens, then things are being made. There is no place for vanity because here is where things are getting built. Vanity usually comes in when you are outside in regular society. For someone who lives inside this place, you become vanity proof. So all of that vanity that you usually carry when you are successful and famous, it's only a marketing tool for us in this office. At the end of it, you are going to go back to your desk and run accounts and review. I think I am across different things I do, the reality of numbers is also very close to me. So my vanity lies on that number rather than taking anything away," he said.

Rana Daggubati is everything. An actor, a producer, an entrepreneur, a creative force who is changing the movie industry and bringing the best of tech and entertainment world to create an experience that the west already is living and we will soon achieve.

Check out Entrepreneur India's Digital Cover to Know everything about Rana Daggubati- The Complete Man: