By Shreya Ganguly March 4, 2020
Opinions expressed by Entrepreneur contributors are their own.
You're reading Entrepreneur India, an international franchise of Entrepreneur Media.

After  a two year long fight, the Supreme Court (SC) has finally given its judgement on the statues of cryptocurrency in India. Providing relief to the stakeholders, SC on Wednesday (March 4) struck down the Reserve Bank of India imposed complete ban on cryptocurrency.

As the industry awaits for the written judgement, media reports revealed that a three-judge bench including Justice Rohinton Fali Nariman, Justice S Ravindra Bhat and Justice V Ramasubramanian stated the verdict saying that the ban was 'disproportionate'. 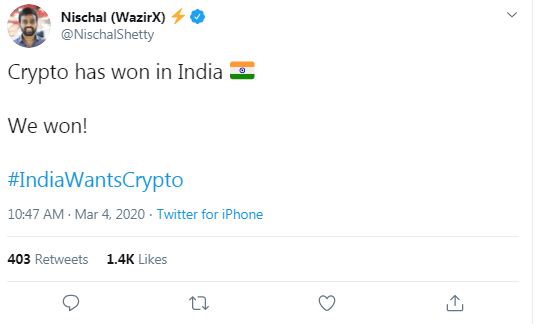 The Indian cryptocurrency market has been on shaky grounds  due to unfavourable rules the central bank’s plan on banning cryptocurrencies. In April 2018. the RBI had issued a circular which barred RBI-regulated entities from "providing any service in relation to virtual currencies, including those of transfer or receipt of money in accounts relating to the purchase or sale of virtual currencies".

Earlier while speaking at the 5th bi-monthly monetary policy conference, RBI reiterated its stance on banning privately-owned cryptocurrency in India. According to RBI governor Shaktikanta Das, issuing currency is a sovereign mandate and this should not be given to private companies. He also explained that amid challenges related to money-laundering, a private currency cannot override sovereign currency.

According to the circular, organizations which were engaged in crypto-related services were to stop their services within three months however the circular was however challenged in the apex court.

According to reports, The Internet and Mobile Association of India (IAMAI) which represents several crypto exchanges approached the court and argued that RBI’s circular which removed cryptocurrency from banking channels would take away the ability of law enforcement agencies to regulate illegal activities in the market.

Taking to Twitter, the industry stakeholders are voicing their support for the SC verdict. With #IndiaWantsCrypto trending across the micro-blogging platform, stakeholders said that the move will give rise to new innovations in the country. 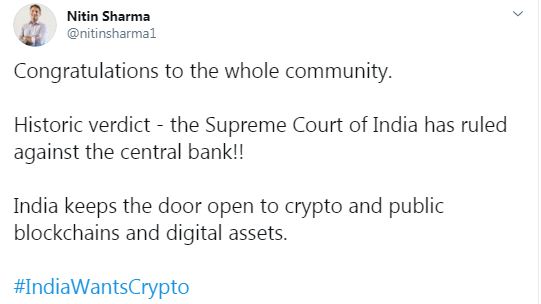 The Supreme Court ruling will now allow millions to participate in cryptocurrency market which might open up several opportunities in the segment.

Ethereum Is On The Verge Of Another New All-Time High