Google's $4.5 bn Investment in Jio Makes up 45% of Google For India Digitisation Fund

At RIL's virtual 43rd AGM, Mukesh Ambani announced that Google will invest INR 33,737 crore (USD 4.5 billion) in Jio Platforms for a 7.7 per cent stake in the company

Speaking at the virtual 43rd Annual General Meeting (AGM) of Reliance Industries, Mukesh Ambani announced that Google will invest INR 33,737 crore (USD 4.5 billion) in Jio Platforms for a 7.7 per cent stake in the company.

The announced capital is 45 per cent of the USD 10 billion Google for India Digitisation Fund that the company had announced earlier this week. Commenting on the same, Sundar Pichai, CEO, Google, said during the virtual conference “Our (Google’s) investment of USD 4.5 billion in Jio is the first, and the biggest investment through this fund.”

With this deal, Google is 14th global investor in less than three months to announce capital infusion into Jio Platforms. The list includes six other technology and financial investors, three sovereign funds and four strategic partners, taking the total investment amount to INR 1.5 lakh crore. Amongst these, social media giant Facebook has infused largest capital of INR 43,574 crore ($5.7 bn) into the company in return of 9.9 per cent stake.

RIL has sold off total 32.94 per cent stake of its digital unit Jio Platforms so far.  “RIL is now a zero debt company,” said Ambani.

In addition to the investment, Google and Jio will partner to develop an Operating System (OS) that could power an affordable 4G/5G smartphone, Ambani stated. 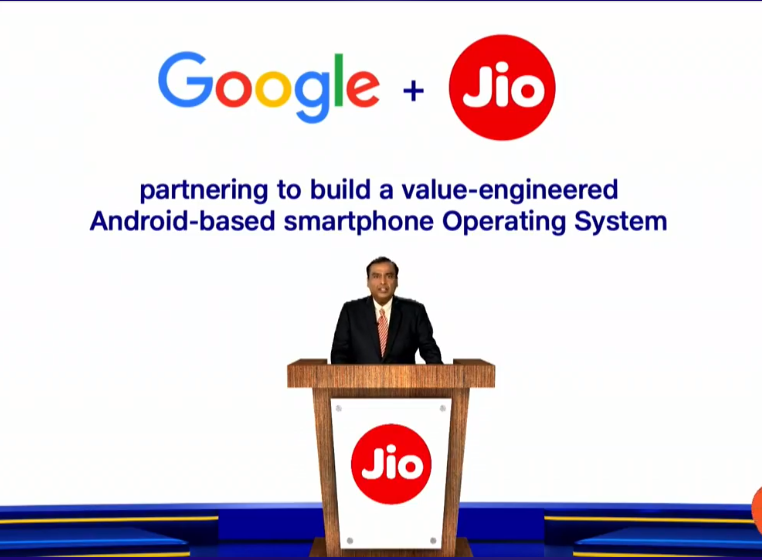 “A couple of years back we developed JioPhone, which still remains the world’s most affordable 4G phone. Even though we have sold over 100 million JioPhones to date, there are many feature phone users who are waiting to upgrade to a conventional smartphone, if only it were more affordable,” he said.  “So, we have decided to address this challenge head on and believe that we can design an entry-level 4G or even a 5G smartphone for a fraction of its current cost.”

The OS and thereby smartphone will be designed keeping ‘India in mind’, Ambani asserted. Google spokespersons reiterated the same thoughts in a blogpost stating that the company is “excited to rethink, from the ground up, how millions of users in India can become owners of smartphones.”

“This partnership comes at an exciting but critical stage in India’s digitization. It’s been amazing to see the changes in technology and network plans that have enabled more than half a billion Indians to get online. At the same time, the majority of people in India still don’t have access to the internet, and fewer still own a smartphone—so there’s much more work ahead,” the blogpost co-authored by Sanjay Gupta, Country Head and VP, Google India and Sameer Samat, VP, Product Management, Google, stated.

Mukesh Ambani: The Man Who Earned INR 90 Crore Every Hour Since March Lockdown