By Tamara Pupic July 22, 2020
Opinions expressed by Entrepreneur contributors are their own.
You're reading Entrepreneur Middle East, an international franchise of Entrepreneur Media.

The fifth edition of Against All Odds, an Entrepreneur Middle East Live series staged in partnership with du, will host Professor Sue Black, OBE, a computer scientist, social entrepreneur, and passionate advocate for women in tech. The webinar will be held at 4pm (UAE time) on Thursday, July 30, 2020. To register and reserve your spot, please click here.

Named as one of InspiringFifty’s top 50 women in tech in the United Kingdom in 2018, Professor Black, winner of the Lifetime Achievement Award at the Lovie Awards 2018, has spent the last 20 years campaigning for more recognition and support for women in computing.

She is the founder of BCSWomen, the first British online network for women in tech and a social enterprise that aims to increase women's confidence, breaking down the digital divide, and helping them escape poverty, as well as of #techmums, a social enterprise which empowers mothers and their families through technology. 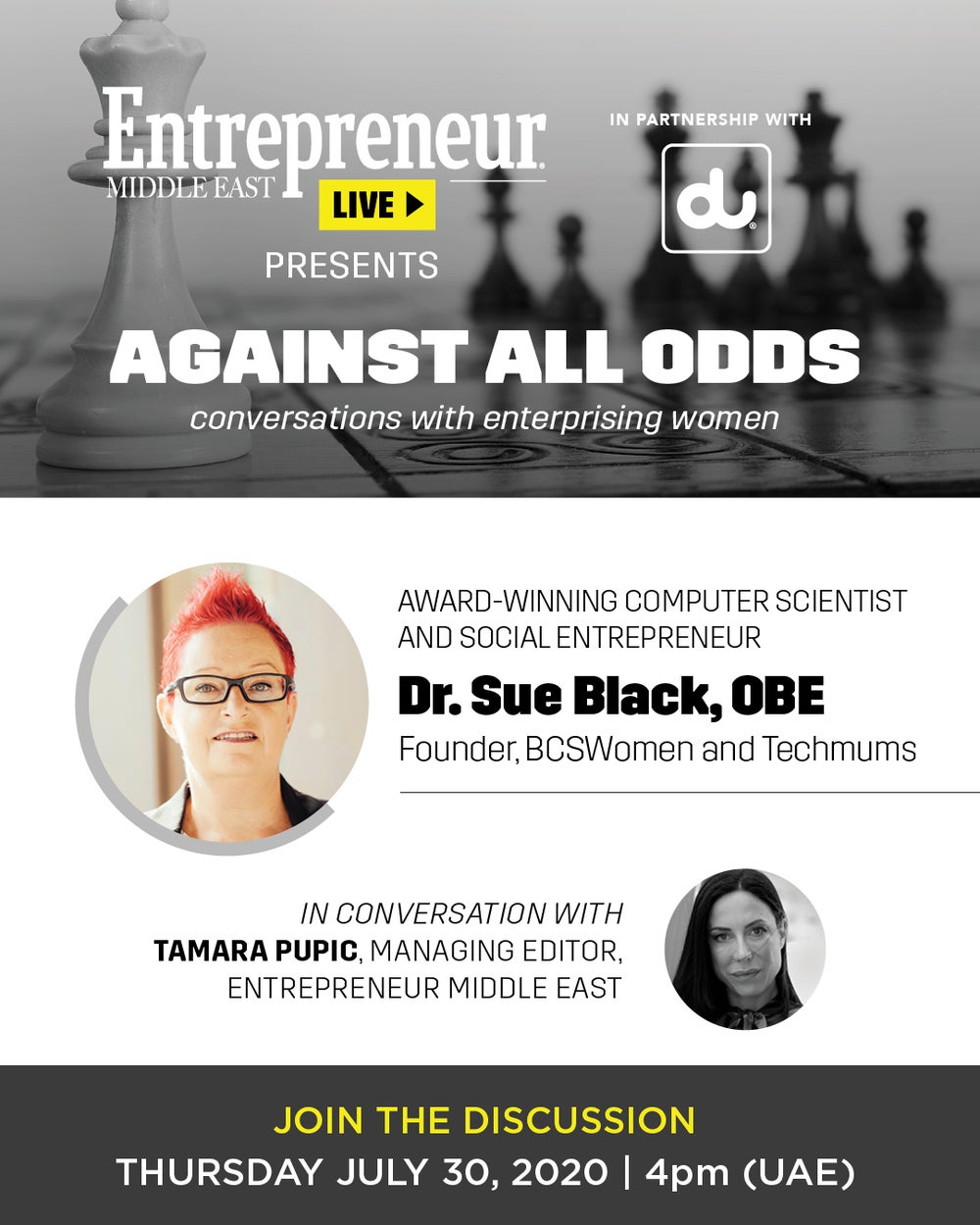 These initiatives stem from Professor Black’s personal experience. At 25, she was a single mother of three living in a women's refuge. Despite her struggles, she believed that education was key to building a career and supporting her family, so she started a maths access course at night school which led to her enrolling in an undergraduate degree in computer science.

In 2001, Professor Black earned a PhD in software engineering and became a lecturer at London South Bank University, and later Head of the Department of Information and Software Systems at the University of Westminster. Today, she is a Professor in Computer Science and Technology Evangelist at Durham University.

Professor Black is also well known for leading a high profile campaign to save Bletchley Park, the birthplace of the computer and the workstation of World War Two decoders of Hitler’s messages to German high command. It is considered to be one of the first campaigns to successfully gain support through social media (Twitter and Facebook) ever.

Professor Black was made an OBE in the New Year Honours list 2016, while in 2017, she received the Social Impact ABIE Award at the Grace Hopper Celebration. She also currently sits on the UK Government’s new advisory board for improving digital services.

Staged in partnership with du, this edition of Against All Odds with Professor Black will be held at 4pm (UAE time) on Thursday, July 30, 2020. To register and reserve your spot, please click here.