Regulations and Taxes: What's in Store for 2021

The recent elections in the United States may signal a changing of the guard in terms of regulations and taxes. Read more to find out which type of investments are likely to benefit from the incoming administration.

By Andrew Hecht December 14, 2020
This story originally appeared on StockNews

Markets reflect the political and economic landscape. Political initiatives have financial consequences. In the US, two political parties dominate control of the nation. Democrats and Republicans exchange leadership roles after elections. On November 3, 2020, the Democrat’s challenger beat the Republican incumbent President and will take over on January 20, 2021. The same party’s majority in the House of Representatives narrowed but remained in control.

Meanwhile, the Senate’s balance of power will depend on two runoff contests in Georgia on January 5. A pair of victories by Democrats will put the Senate in the hands of Democrats. A fifty-fifty tie will give the Vice President-elect, a Democrat, the deciding vote. A split or pair of Republican wins will keep the body within Republican control.

President-elect Biden’s legislative agenda will likely sail through the House and Senate if all three bodies have majorities from the same party. A split between the House and Senate would require more compromise. Meanwhile, whatever the result in Georgia, the election’s consequence will be a substantial shift in US policies, which will impact the economy and markets across all asset classes. However, some clear trends are emerging for investors for 2021 as the global pandemic fades into our memories after a more than challenging 2020.

A changing of the guard in Washington DC

Political division in the US remains at an unprecedented level in our lifetimes. I was a small child in the late 1960s when demonstrations over civil rights and the Vietnam War raged. Sadly, leaders like Martin Luther King Jr. and Robert Kennedy lost their lives in 1968 as violence peaked. Over half a century later, the United States remains torn along political and social lines.

Next month, Joe Biden will become the forty-sixth President. The election was close, with over 160 million Americans casting a vote, a record. The slim margin of victory in a contest where the candidates and their supports had little common ground means that nearly half the US is unhappy with the result while the other half is thrilled.

The changing of the guard in Washington DC will not solve the nation’s problems. The division of wealth, race, gender, and many other issues that divide people will continue to provoke discord. In 1832 when Andrew Jackson won the presidency, New York Senator William Marcy said, “to the victor goes the spoils.” Those spoils will be in the hands of President-elect Biden. A pair of Senate victories in Georgia will only enhance his flexibility in using his office’s power over the coming years.

A different approach- Undoing the past four years

Over the past four years, Democrats and Republicans have agreed on virtually nothing. When the two political parties take positions along party lines without compromise, the American people lose. Both parties are to blame. Political positioning worked contrary to the best interest of citizens. The late Walter Annenberg, an American businessman, once said, “The greatest power is not money power, but political power.” The political power is now shifting from the Trump to the Biden administration. For investors, the President-elect has pledged to address tax and energy policies, among many other issues.

Regulations will likely revert to the pre-Trump administration environment. Corporate taxes will rise. Those earning over $400,000 per year will pay more. However, dealing with the tremendous cost of the 2020 global pandemic will be the greatest challenge.

The price tag for COVID-19 is staggering

The US Treasury borrowed a record $530 billion from June through September 2008 during the global financial crisis a dozen years ago. In May 2002, it borrowed $3 trillion, and more is on the horizon after Democrats and Republicans agree on the next stimulus package. While a vaccine that creates herd immunity is on the immediate horizon, the number of cases and fatalities continue to rise as 2020 ends.

When the virus fades into our memories, the costs will remain as a legacy. Unemployment is at high levels; the economy is sluggish; the vaccine alone will not return the US to the pre-pandemic conditions. In the 1930s, Franklin Delano Roosevelt’s New Deal lifted the US economy from the economic morass of the Great Depression.

The three Rs of the New Deal included relief, recovery, and reform. In 2021, relief will come as another stimulus package for those suffering job losses and economic woes.  Recovery will result from federal spending and job creation. Reforms under the Biden administration will create or enhance social welfare programs.

The extent of the incoming administrations’ ability to tackle the pandemic’s price tag will depend on the elections in Georgia and the balance of power in the Senate. If Democrats win the contests, expect a far more aggressive approach. If Republicans maintain the majority, compromise will be necessary, which could temper some of the initiatives.

Meanwhile, one area of agreement is the need for rebuilding the US’s crumbling infrastructure. A massive infrastructure program will lift the economy. It will create jobs, boost economic activity, and finally improve the roads, bridges, airports, government buildings and schools, and other parts of the infrastructure in states of disrepair.

The critical ingredients for infrastructure building are industrial commodities. Energy powers construction. Iron ore is a primary ingredient in steel. Copper and other metals, lumber, and other raw materials are construction building blocks.

We have already seen prices rise dramatically over the past weeks and months. The lumber price rose to a record high in September. Copper rallied from under $2.06 in March to its highest price since early 2013 at over $3.60 per pound. Crude oil came roaring back from the April record low.

Meanwhile, commodity prices face an almost perfect bullish storm as we head into 2021. A falling dollar is bullish as the greenback is the world’s reserve currency and the pricing mechanism for most raw materials. Monetary and fiscal policies in the form of low interest rates, a tidal wave of liquidity, and stimulus increase the money supply and deficits.

A rising money supply is inflationary. The economic condition is bullish fuel for commodity prices. Meanwhile, the Fed already told us to expect increasing inflationary pressures when it shifted from a 2% target rate to an average of 2% in August.

Commodity producers tend to provide a leveraged return compared to the prices of the raw materials they extract from the earth’s crust. The iShares MSCI Global Metals & Mining Producers ETF product (PICK - Get Rating) holds a portfolio of many of the world’s leading commodity producers, including: 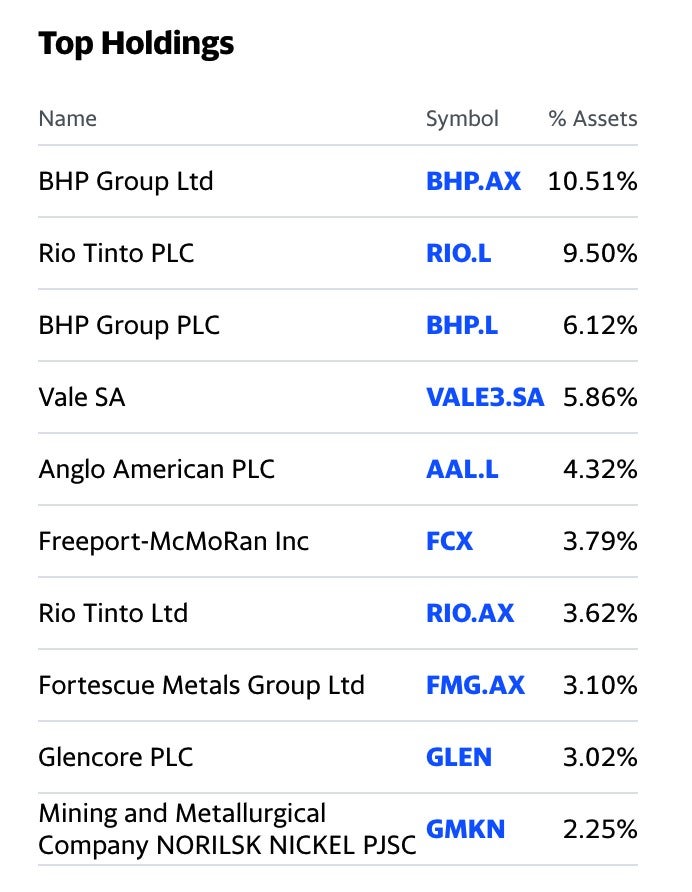 PICK has net assets of $281.32 million, trades an average of over 150,000 shares each day, and charges a 0.39% expense ratio. The ETF has a blended dividend yield of 4.2%. Holding the product for a little over one month pays for the expense ratio. 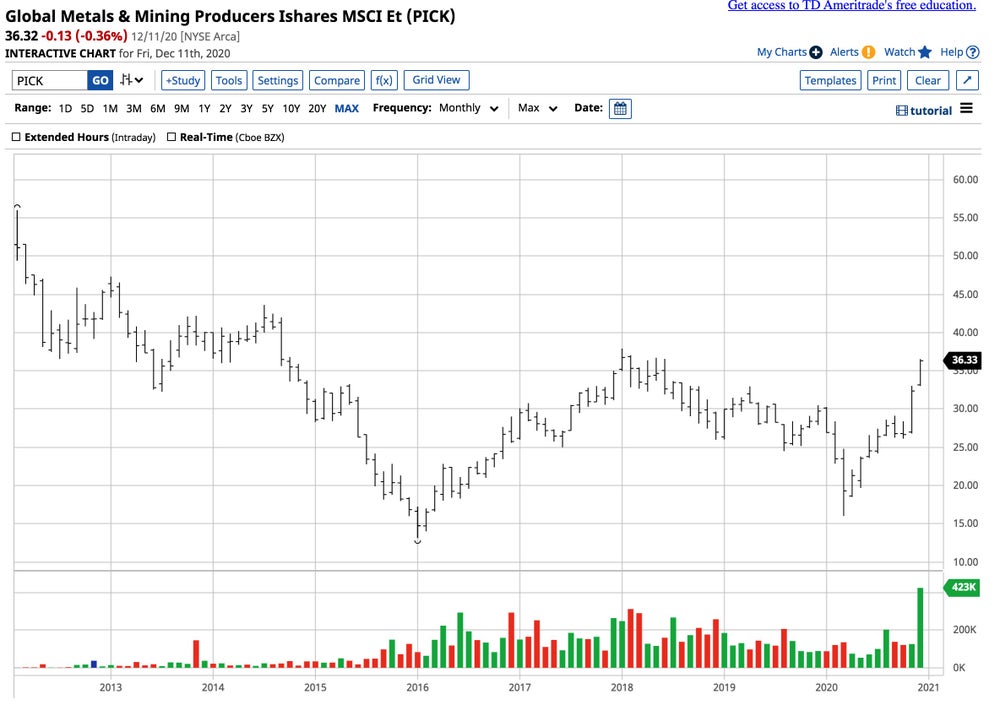 The chart shows that PICK already appreciated from $16.01 in March when the pandemic caused risk-off conditions in the stock market to $36.32 at the end of last week. While the ETF has over doubled in value, it is now approaching a critical technical resistance level at the early 2018 high of $37.91. The high last week was $36.53.

Inflation, a falling dollar, rising demand for commodities in the post-pandemic world, and the rising potential for a US infrastructure program or New Deal for the 2020s favors much higher commodity prices. PICK is an ETF that stands to rise over the coming months and years.

Regulations and taxes will increase in 2021. The new administration in Washington, DC, will take the US on a different path than the past four years. However, the price tag for the pandemic will create some opportunities for investors. Since monetary and fiscal policies in 2020 are even more aggressive than in 2008, we should expect higher commodity prices over the coming years. PICK is an ETF that is likely to capture the upside in the raw materials asset class.

PICK shares were unchanged in premarket trading Monday. Year-to-date, PICK has gained 24.06%, versus a 16.17% rise in the benchmark S&P 500 index during the same period.