For the first time in the financial year 20-21, the already struggling Indian automobile sector has seen a north curve in the registration numbers. Registration numbers denote the number of vehicles bought by consumers and thus graph the consumer mood unlike the dispatched numbers that companies release at the end of every month.

According to the apex dealers body Federation of Automobile Dealers Associations (FADA), December registration witnessed a 11 per cent year-on-year growth due to festival spillover demand and pre-buying due to announcement of price hike in January 2021 as against last month’s 19.29 per cent year on year fall.

Two wheelers, private vehicle and tractor categories grew by 11.8 per cent, 24 per cent and 35.5 per cent year on year respectively.

Commenting on the positive trend, FADA president Vikram Gulati said, “A good crop season, better offers in the 2W segment, new launches both in PV as well as 2W and a fear of price increase in the month of January kept the demand going. Supply side issues in passenger vehicles continued for the second straight month thus making the waiting period as high as 8 months in select OEM vehicles.”

Tractors which have been attempting to lift the spirit of the sector since past sixth month continue to play a crucial role in the sector’s revival.

Though the overall numbers seem to provide a ray of hope for the sector in the post lockdown phase, FADA  has notified that demand for vehicles in January looks to be bleak. It noted that private vehicles  may witness growth if demand supply mismatch is resolved and highlighted that with recent hikes by all OEMs, there can be a  temporary blip in demand  as customers will take time to absorb the same.

The body said with education institutions reopening in the backdrop of vaccination, there will be organic demand for two-wheelers. Government’s approval for INR 12,000 crore infrastructure projects will see its positive effects in the CV space. 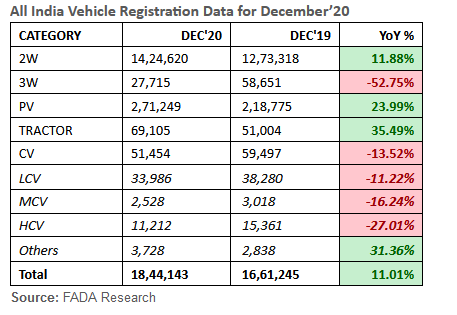