Booming Stock Market Is Attracting Indian Startups For IPO In 2021

By Aditya Rangroo & Smita Mehta January 12, 2021
Opinions expressed by Entrepreneur contributors are their own.
You're reading Entrepreneur India, an international franchise of Entrepreneur Media.

Securing Initial Public Offering (IPO) is the ultimate sought after capital extension by startups. Successful IPO throws open the floodgates for more capital and improvement in the startup economy. Especially in India, except for a few startups like MakeMyTrip and Indiamart, mostly have been unsuccessful in their bid to go public.

Perhaps as 2020 went down as year of highest unicorns , 2021 will see highest number of IPO’s by the startup businesses.

Indian startups like Zomato, Nykaa, Flipkart, Policybazaar and Delhivery are bracing to go public. Also eyeing the markets are the likes of BigBasket, Byjus’s, Ola, Oyo, and Pepperfry. 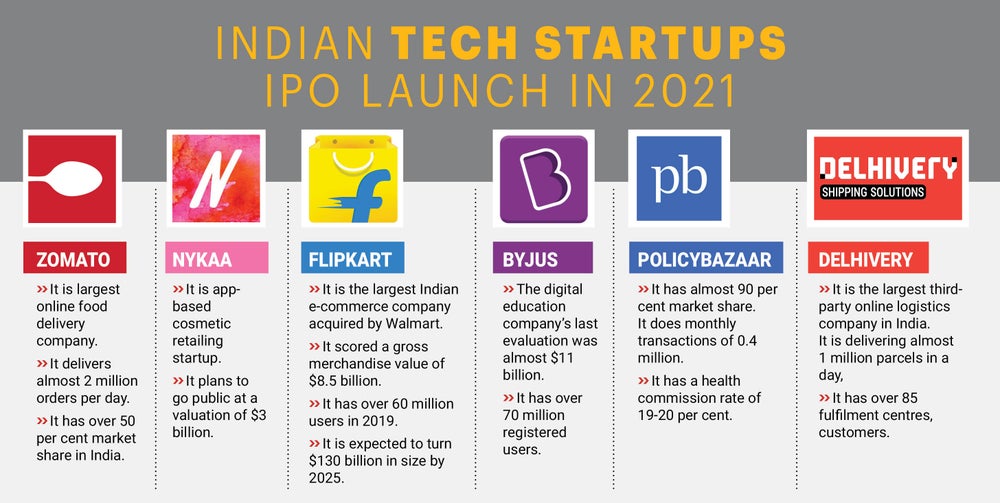 Zomato: Largest online food delivery firm which delivers almost 2 million orders per day. It has over 50 per cent market share in India. The company’s revenue performance was strong, growing 105% in FY 2020 from the previous year. Over the same period, the company’s losses also grew by 47%. In the first quarter of 2020-21, the current fiscal year, the company’s earnings stand at $41 Mn while the losses stand at $12 Mn.

Nykaa: App-based cosmetic retailing startup is planning to go public at a valuation of $3 billion, considering domestic listing and overseas share sale. In 2018, the founder and CEO Falguni Nayar had told in a media interaction that the startup would list in the next two years. Nykaa is considering a domestic listing, as well as evaluating an overseas stake sale, the report added.

Policybazaar: The startup’s co-founder Yashish Dahiya told media that the startup plans to raise $250 Mn in a round of financing at a valuation of $2 Bn, before issuing its initial public offering (IPO) in September 2021. The insurance platform is planning to go public, at a valuation of more than $3.5 Bn. Dahiya has said that the IPO size will be $500 Mn. PolicyBazaar plans to list in Mumbai, but Dahiya is open to a dual listing. With almost 90 per cent market share, the largest online insurance company in India does monthly transactions of 0.4 million, has a health commission rate of 19-20 per cent.

Flipkart: Last year in September, media reports suggested that Walmart was planning an IPO for Indian e-commerce major in 2021.The Walmart chief executive also noted that with both Flipkart and its digital payments company PhonePe growing at a quick pace, both companies have room for more investors, and could diversify in several ways, including IPOs. The report mentioned that the IPO could value Flipkart at over $50 Bn. Flipkart would likely choose between Singapore and the US for its IPO.

Byjus: The digital education company’s last evaluation was almost $11 billion and has over 70 million registered users.

Delhivery: The largest third-party online logistics company in India. It delivers almost 1 million parcels in a day, and has over 85 fulfilment centres, customers include e-commerce giants Amazon and Flipkart.

Based on Zomato’s revenue in the first quarter of the 2020’s fiscal year, it looks like FY21 wouldn’t be as profitable for the company as FY20. Assuming that the average quarterly revenue for Zomato will be between $41 Mn and $45 Mn, the expected annual revenue for FY21 will be in the range of $165 Mn-$180 Mn.

Emerging scenario in the pandemic

In March 2020, beginning of the Covid-19 crisis, the markets crashed and investors, private investment funds seized across the world. By the mid-2020, as the lockdown was relaxed, business activities resumed and deal-making made a quick turnaround. By the end of 2020, over a dozen startups had become unicorns, recording maximum in any year.

Lockdown established the work from home or WFH cult. Therefore, confining outdoor to indoor. The biggest gainers were unicorns in digital education, logistics, content, SaaS and enterprise software segments. While fintech, cab service aggregators were among those who faced tough times.

Ashis Biswas, Head of Technical Research, CapitalVia Global Research Limited-Investment Advisor, was quoted by media saying that 2021 looks to be extremely positive for the initial public offer. Biswas expects several prominent companies to hit the IPO market in 2021. The factors that will play an important role for IPOs in the calendar year 2021 include the progress on economic reforms and the central bank’s intention to keep liquidity taps open.

“Government effort to bring back the momentum in the economy through stimulus packages, easing of doing business, and relaxing FDI norms is the key for the 2021 IPO market,” Biswas added.

On the similar lines, Abhay Doshi, Founder- UnlistedArena.com dealing in Pre-IPO & Unlisted Shares, told media, in the grey market and unlisted market the trend seems to be highly bullish. “We may see further activity in the grey market as and when IPOs get confirmed,” he said. Hence, the trend is strong but with less activity,” he said.

In the meantime, Raj Purswania, former wealth manager at Morgan Stanley, said the stock market has boomed during the pandemic, with pharma sector witnessed massive growth. However, talking about tech startups, it is difficult to say whether the startps will launch their IPO on BSE of Nassdaq. “Going from my observation, most Indian tech startups will go public on BSE platform,” he said.

Similraly, Ankit Rawal, Director and Business Development at Affle, said going IPO is the holy grail for many founders when they start a company. Buoyed by the blockbuster IPOs of several silicon valley companies in 2020 be Airbnb, Doordash to  Snowflake, I feel few mature Indian startups can ring the bell this year.

Covid accelerated several “High-Touch” industries to become “Hi-Tech” overnight helping many companies in the digital space to grow exponentially esp. in E-com, Food Delivery to Education and FinTech. Coupled with hopeful incentives that may be offered by the government to upstarts in the upcoming budget, I feel some of the bigger companies across both B2C or B2B can go public in 2021.

Speaking about whether tech startups will be listed in BSE or Nasda, Rawal said it depends on the current market focus, majority of customers and partners to quantum of capital needed they can list on BSE or Nasdaq. Despite Indian economy becoming rapidly digitized very few internet companies are listed esp. on Indian bourses. Hence I feel listing in India will give them a scarcity premium and will make more retail investors participate in the digital India story.

In September, the Companies (Amendment) Bill, 2020 was passed in Lok Sabha. The pandemic-hit 2020 ended with SEBI’s announcement on easing listing norms for Indian startups to list their shares in the overseas markets.

According to a media report, the Indian tech startup ecosystem is experiencing stable progress at a scale of 8-10% year-on-year growth. The pandemic-struck year witnessed a record with over 1600 tech startups and 12 unicorns added in a single calendar year. As per the annual startup report, Indian Tech Start-up Ecosystem – On the March to Trillion Dollar Digital Economy, by National Association of Software and Services Companies (NASSCOM) and global consulting firm Zinnov.

The new year feels assured of a return to normalcy for Indian tech startups, but with cautious optimism. Nasscom is optimistic the IPO for startups will strengthen in 2021 with several big players announcing to go public. At 40-45% CAGR, deep-tech and new startups are expected to continue to grow. While the investments in 2020 had considerably dropped from 2019, recovery in deal pace and investments is expected to exceed in 2021. India is headed to have a 50-plus strong unicorn club in 2021. Merger and acquisition deals and IPO pipeline are also expected to accelerate in 2021, as per media report.

Last quarter of 2020 was buzzing with optimism. Pinakiranjan Mishra, consumer leader at EY India, said Covid-19 had helped establish the business models of e-commerce companies. It led them to see better demand on their platforms. Hence, an IPO is the next available strategy, a prominent media reported last year.

Zomato’s founder Deepinder Goyal, told his employees in an email, “our finance/legal teams are working hard to take us to IPO sometime in the first half of next year.” “The value of our business is going up dramatically, all thanks to the hard work and commitment of our team. We hope to create a lot of value for our current employees who have ESOPs sometime in the next year,” another media report said in September last year.