Since November 2019, Saloni Gaur has been lovingly known to fans as Nazma Aapi, character of a middle-age Muslim woman played by Gaur in short videos that have taken the Internet by storm.

Nazma Aapi catapulted the 21-year-old to social media fame in less than eight months with her token salutation “As-salamu alaykum Instagram ke bando” accented in Hindi dialect from the Western UP region and brazen social commentary.

Since the first viral video of Nazma Aapi in November 2019 in which she talks about Delhi pollution, Gaur’s follower base has increased from about 1,000 to over half a million on Instagram, 268,000 on Twitter and 383,000 on Youtube.

Today, the Delhi University graduate has her own show ‘Uncommon Sense’ on OTT platform SonyLIV.

Gaur recognises herself as a satirist.

Did she pick the genre for her comedy on purpose? “My father mandated reading newspapers for me and my brother during our childhood. I found the political cartoon section most interesting and aspired to become a satirical cartoonist one day,” says Gaur. The newspaper routine, which inculcated interest in current affairs and father’s inclination in politics has majorly shaped Gaur’s politically charged humor, she says.

The idea of becoming a comic did not strike her until the later years of school. “It was only when I was in class 11th or 12th in school when I thought I could be a comedian as my friends thought I was funny and my parents would laugh a lot at my jokes.”

On being asked when she came to the realisation that she is a satirist, Gaur says though her jokes were usually laced with sarcasm and irony, for the longest time she did not realise she was practising it. “Moving to Delhi for college away from my home in Bulandshahr (UP) expanded my horizons and made me realise that I’m good at social satire. So, I decided to build Nazma Aapi in all seriousness to bring out the best of what I was good at.” 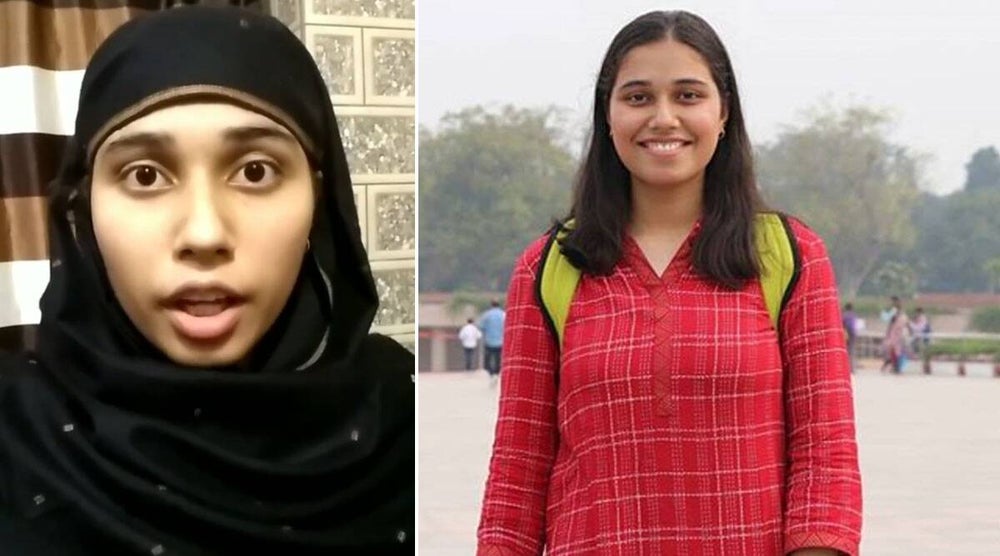 Through her short videos on social media Gaur was growing as a comedian, but online content creator was still not a career choice.

In fact, her plan for a career in comedy was starkly different from what she is doing currently. “I had it all planned out. I will complete college, get a job and whatever I save from the day job will go into performing stand-up acts in clubs at night. I had totally dramatized it in my head,” she laughs.

She denies that making short observational videos on Instagram was the first step towards a career in comedy. It was just a way of doing what she loved—make jokes and mimicry—till she could start working on her ‘plan’. “It was just a medium to keep myself entertained during hostel days. I didn’t think much of it,” she says.

In fact, in all honesty, Gaur says that she discovered Instagram only in 2017 when she came to Delhi for her graduation in Delhi University and was given her first phone ever. “I was completely alien to the concept of social media influencing. It took me two months to learn to create short videos on the app.” So, becoming an influencer was never the intention.

In January 2020, first collaboration opportunity came Gaur’s way that paid her a handsome stipend of INR 50,000. The money was exciting and prompted her to seriously consider monetising her talent. The COVID-19 ensued lockdown in March further opened the floodgates for her.

“I went back home and got much more time and space to create my content,” she says adding that it was actually after the country went under lockdown in March that her follower base went off the roof. “Between November 2019 and March the following year, my follower base had zoomed to 50,000 but it really took off after that.” By June, Gaur had an offer of her own comedy show from SonyLIV.

Apart from Nazma Aapi, Gaur has also assumed characters of Pados Wali Aunty, Aadarsh Bahu, DU Wali Didi and Desi Mom, all of whom are middle class women, to create observational videos on everyday life. But, why doesn’t she not play any male characters? “I don’t have enough content on men’s personalities. In my growing up years, I only had my father and brother around and out of the respect factor, I’m not sure if I can create characters out of them,” she laughs. “However, I do have some things planned for the near future. I’ve even bought a moustache.”

It would be unfair to attribute Gaur’s astounding success squarely to Nazma Aapi and other characters that she plays. She is also a brilliant mimicry artist widely admired for impersonating the queen of controversies Kangana Ranaut as Kangana Runout.

Fame, Trolls and Everything in Between

It is no secret that trolls are part and parcel of online fame. More so if you’re a political commentator. But, Gaur has learned to tackle trolls in a light vein.

“I don’t mind criticism as long as it doesn’t translate into abuse,” she says. This doesn’t mean that it has never impacted Gaur. She describes one instance when she was bombarded with trolls post a video on Arnab Goswami and Sonia Gandhi. “Supporters of both the parties got on my case, which briefly made me question if I had done something wrong.” But, her brother Shubham Gaur, who has been in the same profession for nearly five years and is one of the producers of Uncommon Sense, helped Gaur to not let trolls get to her. “He explained that they are keyboard warriors and get paid for trolling. I’ve learned to ignore them.”

On the other end of the spectrum, does the stardom and all the money at such a young age feel overwhelming? “It doesn’t,” says Gaur. “If anything, we are closer to fulfilling the many financial goals we (Saloni and her brother) had set for us to fulfill our parent’s dreams.”

But yes, initially it did feel like a dream, she says. “It all happened so fast that we didn’t even take it seriously initially. In fact, even after I got the offer from SonyLIV I do not inform any of my friends thinking it will in all likeness get cancelled,” Gaur laughs. “You don’t expect to have your own show at the age of 20, do you?”

Gaur is enjoying her life’s new chapter in Mumbai, albeit hectic. “My first visit to a shooting set gave me a new perspective. It’s a complete lie what you see on television. Houses shown on television are in fact just a wall and the seemingly clean sets can be really filthy.”

On being asked about her future plans, Gaur says she has a few things lined up for her show that she can’t reveal. “Sometimes my mother drops hints about preparing for competitive exams and building a ‘conventional’ career so that’s something to think about,” Gaur chuckles.