Why The MENA Needs A Workforce That Is Proficient In English

By Omar Chihane March 16, 2021
Opinions expressed by Entrepreneur contributors are their own.
You're reading Entrepreneur Middle East, an international franchise of Entrepreneur Media.

Before founding Englease.com to tackle the English proficiency gap in the MENA region, I led learning and development for a global company where I was responsible for upskilling over 15,000 people. One of the biggest lessons I learned during that time was that we need to acknowledge, accept, and learn how to live with one of the most unfortunate biases in a work setting, which is what I call the communication skills bias.

The communications skills bias is one’s assumption of a communicator’s IQ, capability, and potential based solely on the way they present/communicate. It took a lot for me to make it a point to look past this bias, and drive a better assessment of one’s capability and potential, but I can only empathize with how hard it must be for business and society as a whole to adapt to it, therein making the case for the need to live with this bias, by enhancing our ability to communicate better and more effectively.

But why do we need to tackle this bias now, and work on improving our workforce’s communication skills, especially here in the MENA region? To understand that, we need to take a closer look at the landscape we currently work out of.

The International Labour Organization found that in 2018 the unemployment rate in the Arab world was around one in five people, which is almost double the global average. Data from the World Bank also shows that the annual GDP growth of the MENA region has been declining since 2016.

Before rapid globalization, technological improvements, and a pandemic brought us to the point where we are at today, local businesses in the region only needed a very basic level of communication to get by. Small, homogenous teams needed to understand each other, and that was relatively easy to achieve, given they were all based in the same place, and usually had the same linguistic and cultural backgrounds.

Now, you have companies expanding in order to better meet international demand, and as teams grow in size, they also take on more people from different cultural backgrounds. Additionally, it is now increasingly commonplace to have teams work remotely, with one co-worker living in New York, while another is based in Mumbai, for example.

The probability of miscommunication increases as your teams become larger and more diverse. On top of all that, as more managerial positions are added to accommodate for the expansion, it also becomes easier for directions and feedback to be misunderstood as they go up and down the chain of command.

Very often, we think of communication skills as something that some functions need more than others, and while it is true from a job function perspective, it couldn’t be further from the truth from an employee motivation, engagement, and efficiency perspective.

The case can thus be made that developing one’s communication skills, whether they need this skillset to perform better on the job or not, will actually contribute to increasing motivation, thereby boosting productivity. Indeed, the more we develop our employees’ communication skills, the more motivated and flexible they become when dealing with people. You will perhaps start reaching more favorable outcomes when interacting with other parties, or even securing better deals.

That is a skill you want your employees to master. Team members who understand each other form efficient teams, and a team that has mastered speaking the same language will make the most out of every deal and negotiation.

At this point, the question becomes: why should this common language that the workforce should be trained in be English?

Before we get into that, a few notes: 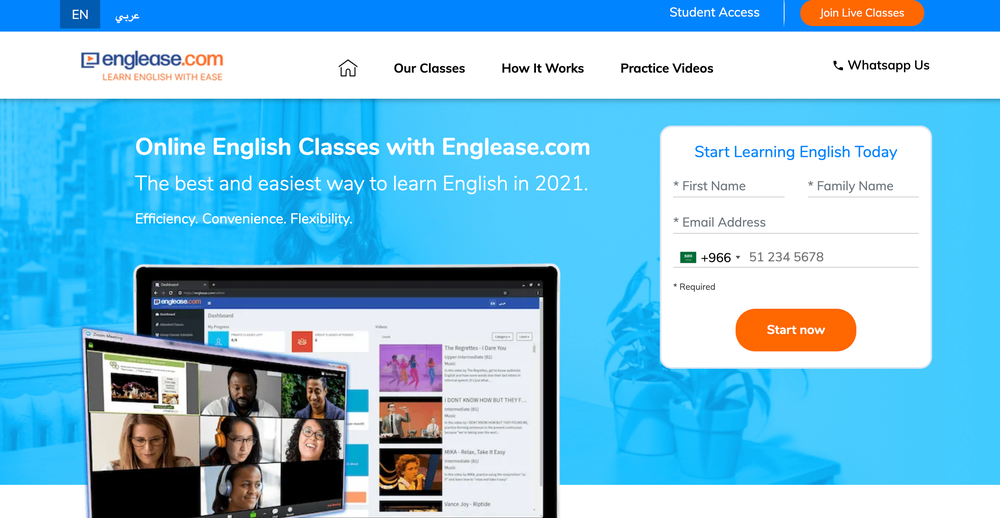 Couple that with one of the youngest populations on earth and an ever-increasing global marketplace, and you quickly realize that English proficiency should be looked at a lot more seriously across organizations in the region– and not just for those who need it most, and instead for everyone.

When business interactions were much more confined to local and regional markets, this really didn’t matter. If the communication skills were up to par, then it all worked out, because we all spoke Arabic.

But with globalization and the digital age, we start to miss huge opportunities, because people aren’t able to communicate in the same language, let alone negotiate properly. The internet economy is a one trillion dollar economy, with English making up 56% of the content online, followed by Russian at 6%.

This means if you’re a graphic designer in Saudi Arabia and you are proficient in English, you can easily sell your services to a company in New York. However, your skillsets in graphic design will not matter if your grasp of the language is basic at best.

We are living in one of the most vibrant regions in the world, filled with beauty and promise, and armed with a young population eager to learn, grow, and contribute to society. As we open our doors to more tourism, more globalization, and more opportunities, we must adopt and adapt the skillsets that not only could allow us to take part, but potentially take over.

And it perhaps all starts with, you guessed it, a better proficiency in English.

Related: Lost In Translation: Communication, Multiculturalism And The Middle East