Cocoa Life: Story Of Women Empowerment At the Centre Of a Sustainable Future

As a women-friendly crop, cocoa has successfully bridged the gap of lack of diversity and inclusion to become a source of equal employment and income to thousands of women farmers

By Roopak Bhat April 1, 2021
Opinions expressed by Entrepreneur contributors are their own.
You're reading Entrepreneur India, an international franchise of Entrepreneur Media.

In the cocoa farms of south India, women have realized that a path to increasing their influence in decision making within their households and communities is by creating their own income generating activities. For long, the patriarchal norms often excluded women from decision-making, land ownership and financial planning. Legally landless, and therefore not considered "farmers', women had limited access to training, financial awareness and means to improve their lives. This step-change towards an inclusive farming community came alive in 1965 with the inception of cocoa development programme in India. A crop not indigenous to the country was first introduced to India more than 55 years back, when an experimental cocoa farm was set up in Kerala by Cadbury India Ltd (now Mondelez India Foods Pvt. Ltd), to reduce reliance on cocoa bean imports. As it became a viable crop, it extended to the neighbouring states of Tamil Nadu, Andhra Pradesh and Karnataka, creating a community of 100,000 farmers now, of which around 15,000 are self-sufficient women. This was further strengthened through the introduction of Cocoa Life program of Mondelez International since 2011 in India. As a women-friendly crop, cocoa has successfully bridged this gap of lack of diversity and inclusion to become a source of equal employment and income to thousands of women farmers in the rural areas of South India. Let us look at this change from the story of Radha.

Radha, a cocoa farmer from the Padicappu Tribal Settlement, Kerala, lives with her husband, two daughters and her father-in-law in a one-bedroom house that the Kerala government built for her family. A fearless and proud lady, she single-handedly took full-time work of seedling production and cocoa farming process four years ago in order to quickly secure the family and their future with a stable income. She manages 1 acre of land divided into two parts: a small plot beside her house where she has planted cocoa and a second plot on the opposite side on which cocoa trees are neatly arranged, and taken care of. Radha is working hard to guarantee the financial means to give her children a good education and a better future. Someone who was deprived of a proper education and started working very early, she now has two daughters and would not involve them in any farm work, instead encourage them to focus on their studies. She hopes they will be able to go on and pursue higher education and paid government work.

Women in farming, undoubtedly, have the untapped potential to improve economies, raise living conditions in households and communities, and be a catalyst for change. Change-makers like Radha encouraging children to stay in school, creating new sources of income for their families, and inspiring environmentally friendly practices, demonstrate how women play a key role in helping achieve a sustainable future. However, it is also critical to understand that empowerment is not just limited to providing means and methods. Changing socio-cultural norms and perceptions that have been cultivated over generations has been an equally important part of this journey towards empowerment. More than 5,200 women community members have been trained on gender awareness to help change attitudes about the roles of men and women. Cocoa Life has emphasized the importance of women's role in cocoa farming communities since its inception. And this endeavour continues with interventions that not only provide them socio-economic opportunities, but also technical know-hows. Through the introduction of modern farming practices such as intercropping with coconut, oil palm and other crops, the program is helping these farmers achieve higher economic self-sufficiency. Beyond farming, the programme has exclusively trained over 5,000 women around health and hygiene, livelihood and empowerment. They are given access to farm inputs and financial education, improving agricultural productivity and helping cocoa communities thrive. Over 5,600 tribal farmers have been integrated into the rural economy by specific programmes developed to enable them to take up farming and also cultivate cocoa in particular, including women tribal farmers like Radha. Promoting leadership positions for women across the chain has ensured equal representation and mentorship opportunities.

M. Kumari, a cocoa worker from the West Godavari district of Andhra Pradesh, feels a sense of achievement every time she thinks about how the plants she raised have found a home across many farms in the state. A proud member of the seedlings production programme, she has been able to ensure a steady flow of income and is hopeful of providing a good future for her children.

As these women trace their success in cocoa farming, one key thing they hope to pass on to the future generation of farmers are skills- both traditional and modern. While providing seedlings can serve the purpose of starting any farming activity, it is equally important to educate and train farmers on practices ideal for people and planet.

When Radha began cocoa farming, she found that the sickle used for moving leaves around the farm floor was inefficient and hard to use. She decided to create her own tool, called an Eeta (a kind of broom) for moving the leaves under the trees – a natural means of keeping the soil fertile. Also the cocoa pods being hard to break, she asked her brother-in-law to make her a blunt tool out of wood to break the pods open in an efficient and fast way. These inventions and adaptations have enabled her to farm more efficiently and easily. 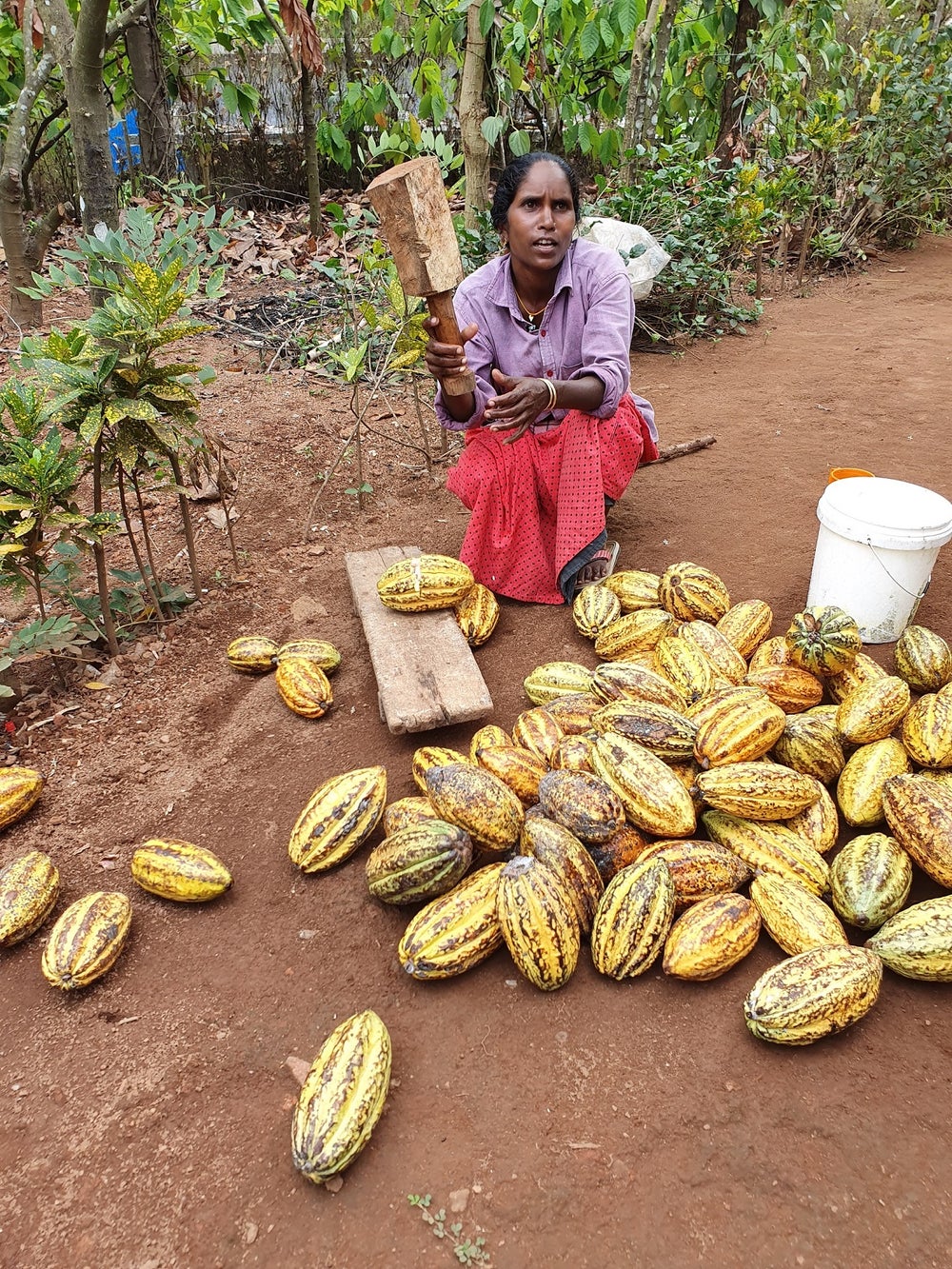 The same technique when shared with other women farmers on common interactive training platforms holds the potential to increase the productivity across the area. Women who are a part of the program also go through technical upskilling through Good Agricultural Practice or GAP training annually. These collaborative engagements, such as farm meetings, seminars, cocoa van meetings, and educative/interactive series complement the agri research and allow farmers the first-hand experience with the technology, thereby ensuring that India has the best cocoa productivity. Beyond techniques and skills, cocoa farmers are also conscious about conserving their lands and forests around. The attachment and care for land is inherent, and especially among farmers from tribal communities like that of Radha, who believe in symbiotically living with the nature. Through active participation, they learn and adopt Good Environmental Practises — using organic fertilisers, bio-control agents and drip irrigation to minimise wastage and conserve the environment.

Radha's love for the forest and nature, and dedication towards making cocoa farming an effective opportunity for women through her methods, highlights that the story is a great example of an initiative that envisions a future in the hands of inspired and empowered line of cocoa farmers. It also a story of entrepreneurial spirit among women farmers and their curiosity to learn from programmes like Cocoa Life to be able to lead an effort like this to support their families. For every business to achieve a sustainable growth, it is important that we do it the right way where both people and planet thrive.