She Was Once Declared The UAE's Youngest Inventor- And Now, Fatima Al Kaabi Wants To Help Other Girls Follow Her Lead

From robotics kits she was gifted at the age of seven, to watching sci-fi movies, shows, and documentaries on technology and innovation, Al Kaabi has spent years exploring various ideas and possibilities.

By Tamara Pupic June 21, 2021
Opinions expressed by Entrepreneur contributors are their own.
You're reading Entrepreneur Middle East, an international franchise of Entrepreneur Media.

Fatima Al Kaabi is a young Emirati inventor who can boast of being the recipient of a number of industry accolades from the UAE like the Robot Olympics Award in 2014, the UAE Pioneer Award for being the UAE’s youngest inventor in 2015, the Arab Award for the Best 10 Inventors and Innovators of 2015, and the Sheikha Fatima bint Mubarak International Award for Arab Youth in 2017. According to Al Kaabi, all of her achievements can be drawn down to a passion for innovation and inventing that has been honed from a very early age. "I grew up in a household with parents interested in the science, technology, engineering, and mathematics (STEM) field,” Al Kaabi says. "My father is an engineer, and my mother is an information technology major. Seeing them passionately speak about their work at the dinner table, or them explaining to me how things worked around the house got me engaged and interested in STEM.”

From robotics kits she was gifted at the age of seven, to watching sci-fi movies, shows, and documentaries on technology and innovation, Al Kaabi has spent years exploring various ideas and possibilities. "My love for inventions has been with me since I was a child, and I continued to invent whenever I had spare time, as a personal passion for innovating. I was only 10 when I built my first robot that could take pictures. With each invention, I try to expand my horizon and think outside the box as much as possible. For example, I developed a solar charging bag for devices, as well as a robot called The Teleporter that attends school in place of sick children, in addition to an electronic belt for the hearing impaired, and a smart steering system that stops people from texting while driving.” Each of her inventions, Al Kaabi explains, is inspired by a specific story or situation. "For example, with The Teleporter, I had visited the Tawam Hospital [in Abu Dhabi, UAE] and saw children there suffering from cancer,” she says. "I realized their treatment would deter them from going to school, and this made me think of a machine that would record their classes for them, similar to the remote learning system we have in place today. It’s incredible how small day-to-day situations can inspire anyone to create something new using resources within reach.” 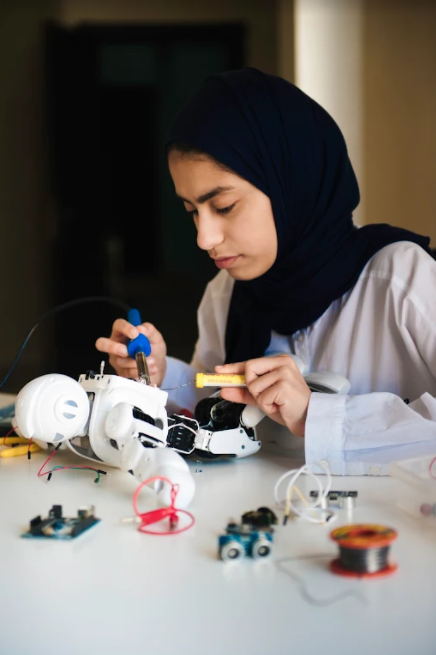 Fatima working on one of her various inventions. Image courtesy: Fatima Al Kaabi

However, Al Kaabi’s inventiveness did not always find a welcoming environment outside the walls of her home. "I have also faced some backlash simply for being a girl interested in STEM,” she says. "I wasn’t made to feel very welcome by many people who thought I was unfit for certain opportunities, or still had old-fashioned ideas of what women could and couldn’t do, but luckily, my family stood firm behind me.” Over the years, there has been a change in attitude towards young women excelling in STEM. "There are many resources today that young children, specifically girls, can use to educate themselves and build their skillset,” she says. However, Al Kaabi notes that the UAE has been especially progressive in terms of opening the doors for women and girls in technical fields. For her, it was in 2015, when she was named as the UAE’s youngest inventor, that she felt as if she had finally got a stamp of approval from society at large. "It has helped me gain some validation in places where I have been seen as unfit, even if it came with a lot of responsibility,” she confirms. "I am honoured and privileged to carry that title, especially as it came from H.H. Sheikh Mohammed bin Rashid Al Maktoum. Getting the support and recognition from the government has been one of the highlights of my journey.”

Investing in Innovation: The Future Is Here, a new documentary being powered by the UAE’s Mubadala Investment Company to showcase the country’s efforts in accelerating a knowledge-based economy, is expected to contribute to the greater social acceptance of the nation’s young women pursuing -and thriving in- STEM careers. It should come as no surprise then as to why Al Kaabi was chosen as this film’s host. "Hosting the documentary was a one-of-a-kind experience; the chance to speak to individuals who are changing the world with innovation and technology is truly inspiring, and the fact that I was representing my country as a female Emirati inventor filled me with national pride,” she says. While filming the documentary, Al Kaabi got to visit one of Mubadala’s investments, the Strata facility at the Nibras Al-Ain Aerospace Park in Al Ain, which was established in 2009 to meet the demands of the evolving aerospace industry. There, Al Kaabi explains, a large portion of the workforce comprises of young Emirati women. "It was truly impressive and inspiring to watch them manufacture and handle aircraft parts, something that has always been deemed as purely masculine,” she says.

Related: The Role Emirati Women Can (And Should) Play In The UAE's Digital Transformation Strategy 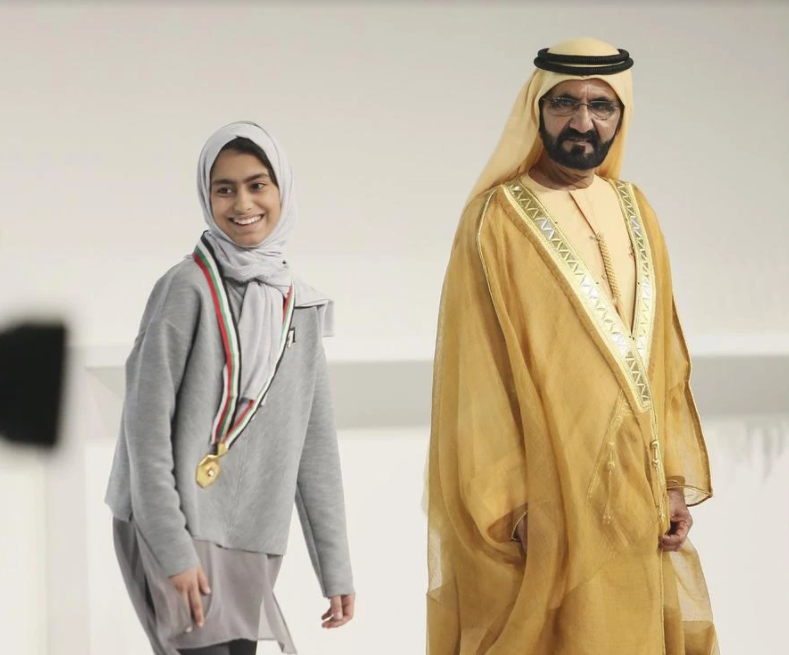 Recently, the World Economic Forum’s Global Gender Gap Report revealed that the UAE ranks among the top five countries in the world that have made remarkable headway towards bridging the gender gap and striving for gender equality- and it has done that despite the outbreak of the COVID-19 pandemic that stalled progress towards gender parity in many countries. Indeed, the UAE ranks first among Arab countries in the advancement of women in all sectors, including space and STEM. One example of the country’s forward-thinking approach can be seen in the announcement of the first female Arab astronaut Nora Al Matrooshim, who will be joining her colleague Mohammed Al Mulla to form the second batch of the UAE Astronaut Program. According to Al Kaabi, this is just one indication of how the UAE has been increasing education and work opportunities for young women in the STEM field. "Gender stereotypes are quickly becoming a thing of the past where STEM subjects were seen as completely masculine, and there was a lack of visible female role models to inspire the next generation of young girls,” she says. "Also, schools are being more encouraging in pursuing STEM subjects where young girls are given the skills and confidence to succeed, and there is an increased public awareness in how parents can encourage their daughters in STEM as much as their sons- something that I was very fortunate with in my own family.”

While she credits her family for playing a major role in motivating her to excel in her STEM career, Al Kaabi notes that she has had other role models too. "I would also like to acknowledge Reem Al Marzouqi, an inventor and engineer who created a car that can be driven entirely using your feet,” she explains. "She also developed an interactive robot for children on the autism spectrum. As you can see, a lot of her work revolves around creating inclusive spaces and devices for the benefit of humankind. Reem was kind enough to guide me through some of the challenges women face in this field and has supported me throughout this process.” Another woman who has been a source of support in Al Kaabi’s career is Roudha Bin Baher. "She is an Emirati engineer, who was the only woman to participate in the World Skills competition in the refrigeration and air conditioning category,” Al Kaabi explains. "Her work has since gained recognition globally, and she has inspired females everywhere to follow suit. She also started a mentoring program with Danfoss Engineering to promote female representation in the field, emphasizing that this is a field for both men and women.”

Going forward, Al Kaabi believes that it will be crucial to continue pushing the envelope when it comes to jobs and gender roles, with the focus needing to remain on engaging girls and women in STEM and providing them with an environment to thrive in. "I think amplifying stories of women inventors and just recognizing the struggles we face can make a big difference,” she says. One day, Al Kaabi hopes to earn a Master’s as well as a PhD degree in artificial intelligence (AI), and then start her own AI company, and even become an AI professor- and we are sure that she will continue inspiring many more girls from across the UAE to follow suit. 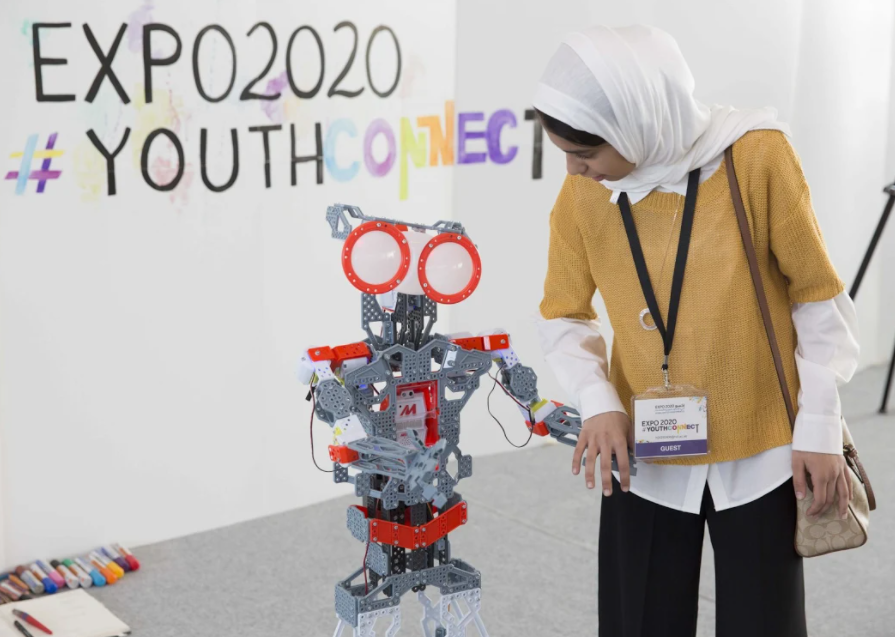 Fatima poses with a robot as part of a project she worked on at an event organized by Expo 2020. Image courtesy: Fatima Al Kaabi

Focused on the future: Fatima Al Kaabi’s tips for young women considering a career in STEM

1. Keep looking for programs or initiatives that can help you achieve your dreams “The UAE has been a pioneer in encouraging an interest in STEM education among the youth, with various entities such as Mubadala or ADNOC giving people like me the chance to better understand these fields and perhaps pursue a career with this in mind.”

2. Become your own source of inspiration “When I was growing up, I didn’t have many female role models to look up to, but now we are surrounded by female success stories such as Emirati innovator Maryam Al Hashimi, who made petrol and solar panels out of plastic. Alia Al Mansoori’s Genes in Space experiment, focusing on investigating gene expression of heat shock proteins induced by stressors found in space, is also a great example. These are a few of our young, female Emirati talents who are role models for our women to succeed.”

3. Think beyond what you already know– trust in the process “Though you may not know much about STEM, or where it can take your career, remember that life is about pursuing a career that you enjoy and are passionate about. It may seem difficult at first, or challenging, but don’t forget what made you consider STEM to begin with: your love for education, and making a positive impact on those around you. It may take years for you to figure out which particular area of STEM you prefer, but I promise the feeling of success in your own right is unlike anything else.”

4. Don’t be intimidated by teams that are predominantly male “When you enter a field that has previously been dominated by men, it’s normal to be nervous about whether or not you can do as well as they can. Don’t underestimate yourself or sell yourself short. You can be just as successful as anyone if you put your mind to your studies, and remember that you’re doing this for a bigger purpose. As long as you remember the reasons why you entered the STEM field to begin with, this will motivate you to succeed despite all obstacles.”

5. You are your best teacher “Though we are seeing more resources that welcome young children, especially girls, and teach them how to build projects and code, I taught myself the foundational skills I needed to explore innovation. I turned to the internet, specifically YouTube, to understand the basics, and you can too. Remember, your education spans outside the classroom too– the world can be your teacher if you know where to look. You can also keep an eye out for my sessions; I speak at schools across the UAE and am an avid mentor. I also love hosting hands-on workshops for people of all ages.”