We Got Funded: Abu Dhabi-Based Insurtech Startup Hala Raises US$5 Million In Series A Round To Expand Across The Middle East

With the new capital infusion, the team plans to launch its new products such as home insurance, as well as scale the enterprise across the Middle East, starting with Saudi Arabia.

By Pamella de Leon August 31, 2021
Opinions expressed by Entrepreneur contributors are their own.
You're reading Entrepreneur Middle East, an international franchise of Entrepreneur Media.

Hala was founded in 2018 by brothers Walid and Karim Dib, after the duo found themselves frustrated with difficulties accessing insurance, as well as the lack of digitization, transparency, and empathy in the industry at large. While the company initially sought to sought to reconcile payments between motor insurance companies in the UAE using blockchain, in 2020, Hala decided to concentrate its efforts in building an insurtech platform that would turn insurance “lovable, affordable, and accessible.”

By focusing on being customer-obsessed and transparent since its launch, the startup has managed to secure over 2,000 customers, and has tripled staff since the beginning of the year. Walid Dib, co-founder and CEO, emphasizes Hala’s customer centricity as its distinct offering for the market. “Our competitors are aggregators that are effectively the Skyscanner's of insurance," he says. "Hala is building a full stack insurance company, with the intention of getting all the needed regulation along the way. What that means for the customer is that they'll be able to buy policies and file claims digitally through Hala. Think of us as the Revolut of insurance for the MENA region.” 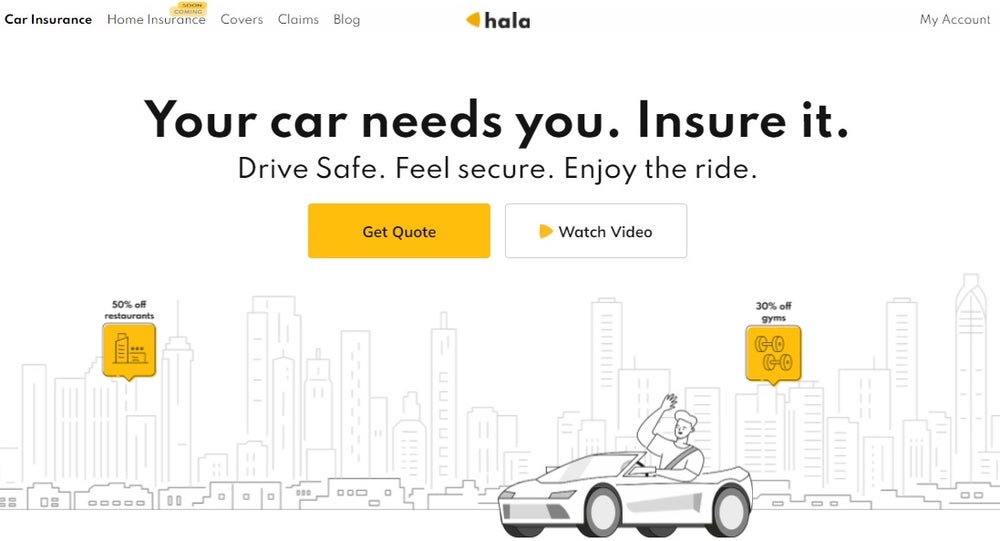 According to Avi Eyal, co-founder and Managing Partner, Entrée Capital, the team at Hala is what especially influenced his company's decision to invest in the startup. “We met Karim and Walid last year, and we weree immediately taken by their startup mentality, their will to succeed, and their ability to analyze and build Hala with very little capital," he says. “From a serendipitous meeting, our relationship has grown, and we found their approach to build a tech-driven, disruptive insurance company in the Middle East to be an exciting prospect, so we have put our full weight behind the team, and look forward to many successes ahead.”

With the new capital infusion, the team plans to launch its new products such as home insurance, as well as scale the enterprise across the Middle East, starting with Saudi Arabia. With a number of plans on the horizon, it’s interesting to see how the team is strategizing for growth, which Dib believes is all down to fostering a performance-based culture. “We work very hard, and play very hard. We're quick to call out errors, but slow to judge others. All employees are informed of others work through daily stand-up meetings and bi-weekly huddles. The team is growing at a break-neck pace, and we're realizing that 'the Hala hustle’ is growing organically in small pockets throughout the entire organization. We're very horizontal: everyone can make a suggestion, and everyone can critique objective flaws in our design.”

As for Hala’s future, the co-founders are dreaming big. “The end goal of Hala is to become a regulated full stack insurance company," Dib declares. "We want keep a pulse on the metrics that matter, and by doing so, we're building an insurtech that actually cares about the customer, instead of promising them the steak, and just selling them the sizzle.”

7 SEO Copywriting Tips to Get Your Business Ranking on Google