Envisioned as an innovation hub that will support Jordanian startups, SMEs, and entrepreneurial individuals in the tourism and hospitality sectors, Nazzal hopes to attain two primary goals with Landmark 2.0

By Tamara Pupic September 13, 2021
Opinions expressed by Entrepreneur contributors are their own.
You're reading Entrepreneur Middle East, an international franchise of Entrepreneur Media.

Given how the tourism and hospitality industries around the world have been severely impacted by the COVID-19 pandemic, the world has been showing a lot of solidarity and compassion towards the entrepreneurs and enterprises in these segments. But that’s not to say that support is being showcased by only those who are on the outside of these businesses- on the contrary, there are also players within these sectors that are attempting to ensure the revival of both themselves and their peers.

That is the story of Mary Nazzal, founder of Landmark Amman, a homegrown premium hotel brand in Jordan, which has recently partnered with the country’s branch of Endeavor (“the world’s leading community of high-impact entrepreneurs”) to launch a new project: Landmark 2.0. Envisioned as an innovation hub that will support Jordanian startups, SMEs, and entrepreneurial individuals in the tourism and hospitality sectors, Nazzal’s goal for this project is two-fold. Firstly, it allows her to inject innovation into the hotel, as the project invites interested participants to leverage the Landmark Amman’s “local, authentic, sustainable, and inclusive” experience for launching their newly-developed solutions. And by supporting these innovations, Landmark 2.0 also helps realize Nazzal’s second goal- to restore a level of hope and optimism in Jordan’s tourism and hospitality sectors. 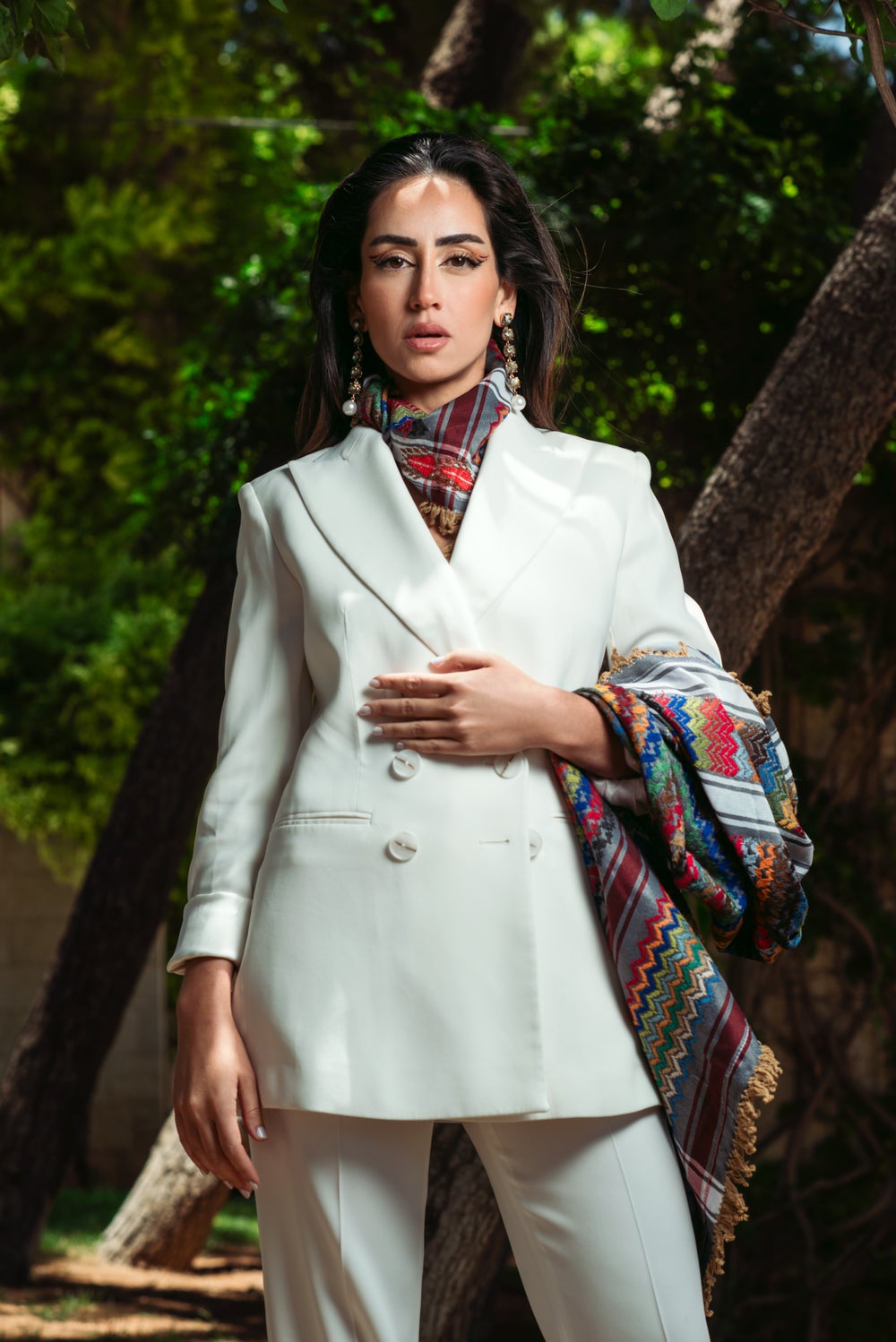 To kick off Landmark 2.0, Landmark Amman and Endeavor Jordan opened their call to both individuals and companies, which are based in or able to relocate to Amman for the duration of the program, that “possess a vision for an innovative idea or initiative that can impact the hospitality sector.” Nazzal reveals that the first cohort of successful applicants for Landmark 2.0 was selected in August, with her team now working on customizing the support package to suit each project. The selected participants will be given full access to Landmark Amman’s premises as a front-end and back-end support space for their operations, on-site execution, and product testing, as well as access to capital, coaching, mentorship, and local B2B matching services to help them scale and grow their product or service offerings.

“Entrepreneurs have indicated that their biggest challenge is reaching potential customers and being able to test their products and services,” Nazzal says. “With Landmark 2.0, selected participants will be presented with an actual business opportunity- they will be able to test their products within the Landmark Hotel, and to access the Landmark’s network of partners and customers. In addition, selected participants will receive one-to-one coaching to tackle major business challenges relating to finance, human resources, business development, rules and regulations, and even their own wellbeing and growth mindset.”

Nazzal’s leadership of Landmark 2.0 won’t come as a surprise to those who have been following her efforts to support the local community over the course of her career. Some of the most transformative projects she has implemented in her time at Landmark Amman include the creation of free on-site daycare for the children of all Landmark employees, inclusive hiring of women and people with disabilities, and the establishment of an on-site aquaponics dome called “Green Hub by Landmark,” which provides the hotel with vegetables grown on its own roof. 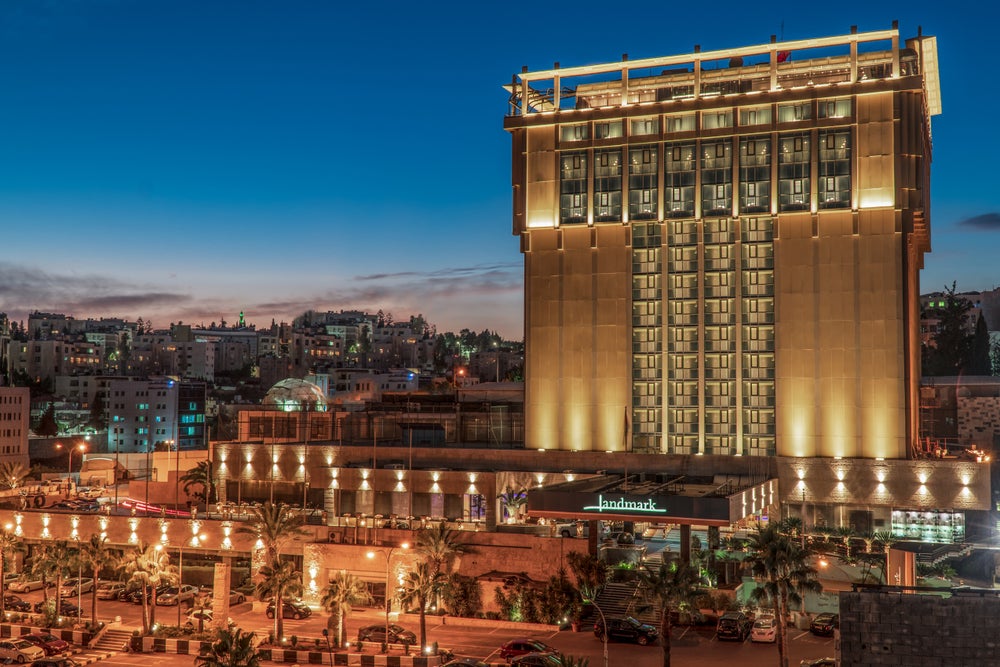 Nazzal has also led Landmark Amman’s partnership with Social Enterprise Project Jordan (SEP Jordan), which operates from the Jerash “Gaza” Camp, Jordan’s fifth-most populated Palestinian refugee camp- over 500 embroidery artists from this location have now got their products showcased in a shop located in the hotel premises. The aforementioned list of projects serve as a good indication of the perspective with which Nazzal runs the show at Landmark Amman. “We can no longer run businesses or make investments without simultaneously considering how we can further social impact through our operations,” she says. “This is why I transformed Landmark. Doing well by doing good is not a cliché, it is our only option moving forward. Conducting business as usual has led us to our current situation of environmental degradation and inequality. We have to progress towards a social enterprise or a B Corporation model, where businesses embed social impact or sustainability objectives.”

“The same approach should apply to investments and how we think about the purpose of capital,” Nazzal adds. “All investments have to evolve into the so-called impact investments, where we not only refrain from causing harm to people and planet, but where we intentionally look to further some measure of social impact, equality or sustainability.” This explains why Nazzal, besides her role at Landmark Amman, is also serving as the Executive Chairperson of 17 Ventures, an impact investment and advisory firm specialized in projects related to the UN Sustainable Development Goals (SDGs) and innovative finance in the MENA region. 17 Ventures co-designed Jordan’s first impact fund to further the UN SDGs, and partnered with SEAF (Small Enterprise Assistance Funds), a Washington, D.C.-based impact fund manager investing in growth-oriented SMEs in emerging markets, in order to raise capital for the SEAF Jordan Growth and Impact Fund.

Nazzal explains that the latter is an SME growth vehicle for Jordan and Palestine, with a clear intention to support companies to integrate women, youth, and people with disabilities into the workforce, by creating an inclusive and enabling environment. “Under my 17 Ventures hat, I’m also working alongside other advocates of social entrepreneurship to support the government to establish a regulatory framework that would govern the establishment and regulation of social enterprises,” Nazzal says. “My partnership with SEP Jordan, which spans almost a decade, has affirmed to me time and time again the need to support businesses that have a hybrid nature designed to both do well and do good at the same time.” 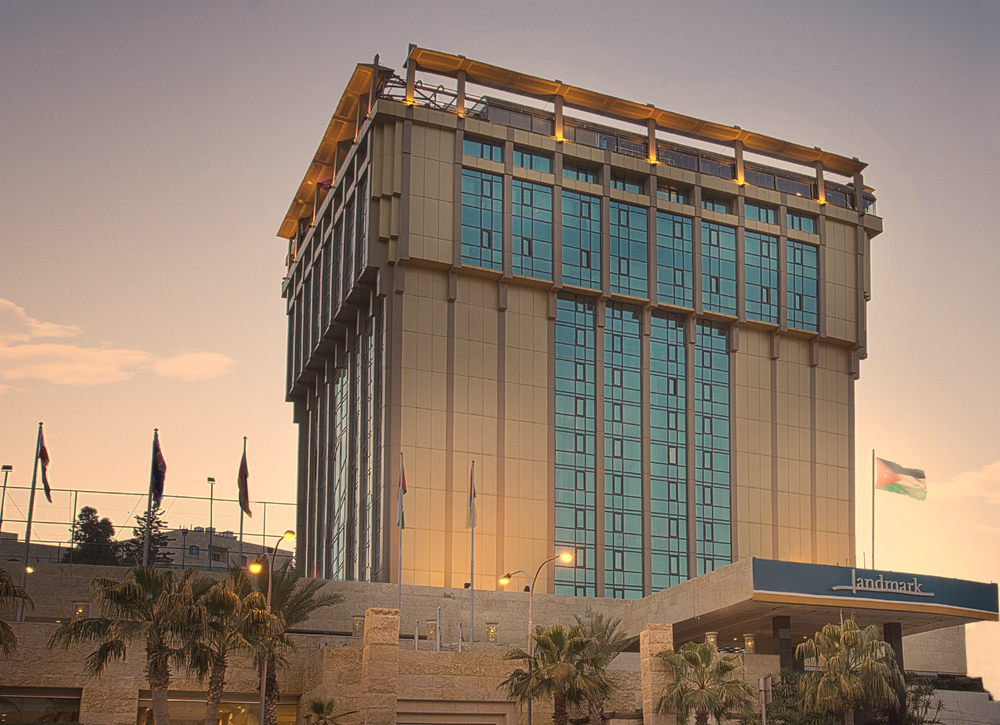 When speaking about her work as an advisor for a global investment fund for refugees, Nazzal reiterates that an area of long-standing importance for her relates to the forcibly displaced people and their host communities. “I am proud to be working with the US-based Refugee Investment Network (RIN) on an initiative for inclusive investment to identify innovative approaches to financing the whole spectrum of marginalized communities within Jordan,” she says. “I have also worked alongside SEAF in the design of a global investment fund called SEAF Globally Displaced Peoples Fund, intended to invest in companies that disproportionately benefit displaced people and/or host communities. I am also an advisor for Impact Hub Jordan, which is looking to infuse the entrepreneurship scene with values of inclusion and social mobility.”

As someone who’s often been called one of the Middle East’s top businesswomen, Nazzal believes that she has a responsibility to help other women move up the career ladder as well, and it’s something she’s has actioned in all the ventures she leads. “As soon as I assumed responsibility at Landmark, I started creating an environment that would allow me to recruit, retain, and promote more women at the company,” she says. “At 17 Ventures, we are all women. I will always do my best to boost young women around me. I also am acting as a Principal Advisor in an excellent program in Jordan called ‘Get on Board,’ which has supported a distinguished group of women to become certified corporate board members.”

Interestingly enough, despite the number of businesses and initiatives that Nazzal aligns herself with, this mother of three admits that she often feels that she hasn’t done enough for her work, for the causes she supports, or even for her family. But she has learned to work around this feeling too- as she puts it: “I think that, ultimately, we can only do our best, and our best is good enough.” At the same time, she points out the importance of constant learning- Nazzal proudly notes that she managed to complete four executive education courses in 2021 alone. 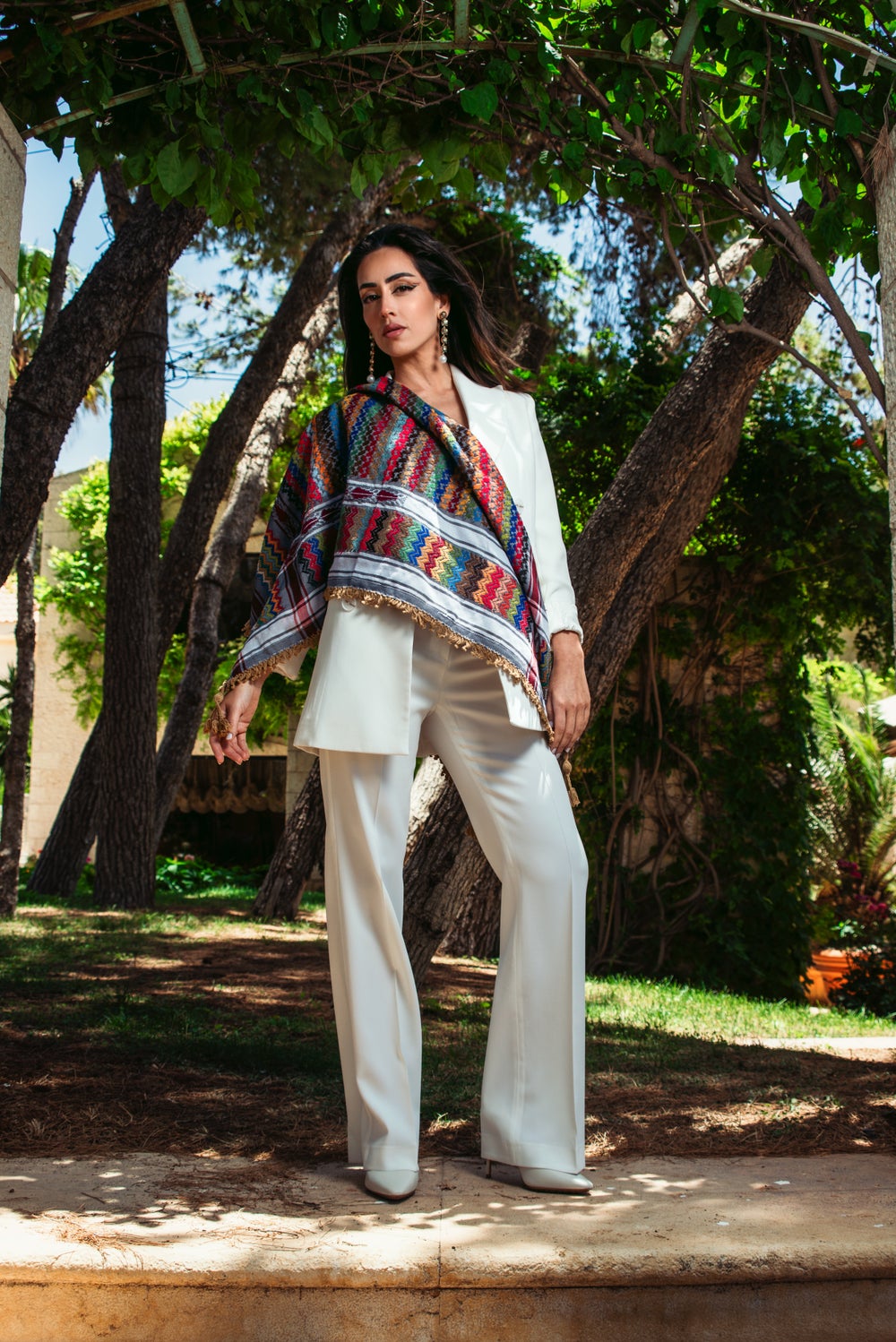 When asked about the challenges she has had to overcome on her entrepreneurial journey, Nazzal replies that dwelling on problems is not part of her personality. “My modus operandi has always been to jump into a problem-solving mode and execution, but some of the challenges that I did learn from happened for example when, having successfully expanded the Landmark Hotel into Palestine, I registered the trademark throughout the Levant with the intention to open hotels regionally, but the Arab Spring ensued shortly after and derailed my expansion plans,” she remembers. “Also, I went into a business partnership twice, which ultimately ended in disappointment, so I would say that a definite lesson is to choose partners very carefully, if you choose to partner at all.”

In conclusion, Nazzal opines that Jordan has the potential to excel in multiple business sectors, including healthcare, education, tech, wellness and adventure tourism, and the creative industries, because she considers that local entrepreneurs are very motivated to make a difference. “However, the country is also facing several challenges, especially post-the COVID-19 pandemic, and it needs to allow the private sector to lead, if it wants to emerge as a model of sustainable and innovative growth for the region,” she says. “As the private sector, we are continuously having to deal with new rules and inefficiencies. We have a huge challenge when it comes to youth unemployment, and we have one of the lowest rates of female participation in the work force.”

In her opinion, Jordanian women and youth need to be integrated quickly and strategically into the country’s economy, as they are key to achieving sustainable growth. “We need bold and decisive leadership for the country, which charts a path and sticks to it,” Nazzal concludes. “We have too many cooks in the kitchen and little consistency, which sometimes makes it unsettling to those of us working to build a future here.”

Is the Rise of the 'Fempreneur' Hurting Women in the Workplace?