Is Celldex Therapeutics Headed for a Breakout?

A resistance line and a level of support has formed in the chart of Celldex Therapeutics Inc. (CLDX). At some point, the stock is expected to break through the resistance....

By Christian Tharp October 4, 2021
This story originally appeared on StockNews

A resistance line and a level of support has formed in the chart of Celldex Therapeutics Inc. (CLDX). At some point, the stock is expected to break through the resistance. When that occurs, a breakout is expected. Read more to learn how to profit from this trade.

Celldex Therapeutics Inc. (CLDX) is a biopharmaceutical company. It is focused on the development and commercialization of several immunotherapy technologies and other cancer-targeting biologics. The company is also engaged in clinical trials for products targeting breast cancer, metastatic melanoma, lung cancer, solid tumors, and ovarian cancer.

Over the summer the company reported strong results from an early-stage study for its experimental antibody therapy CDX-0159. Then last month, the company announced that it had initiated dosing in the first cohort of a phase I study evaluating the drug.

The company appears to have a solid balance sheet as it had $164 million in cash at the end of the last quarter compared to only $1 million in long-term debt. In terms of growth, sales are up 90.7% over the past year and are expected to soar 212.8% year over year in the current quarter leading to a Growth Grade of B in our POWR Ratings system.

However, the stock looks overvalued with a price-to-sales ratio of 234.98, which is well above the high industry average of 12.7. The stock has been showing bullish long-term momentum as shown in the chart below.

Take a look at the 1-year chart of CLDX below with my added notations: 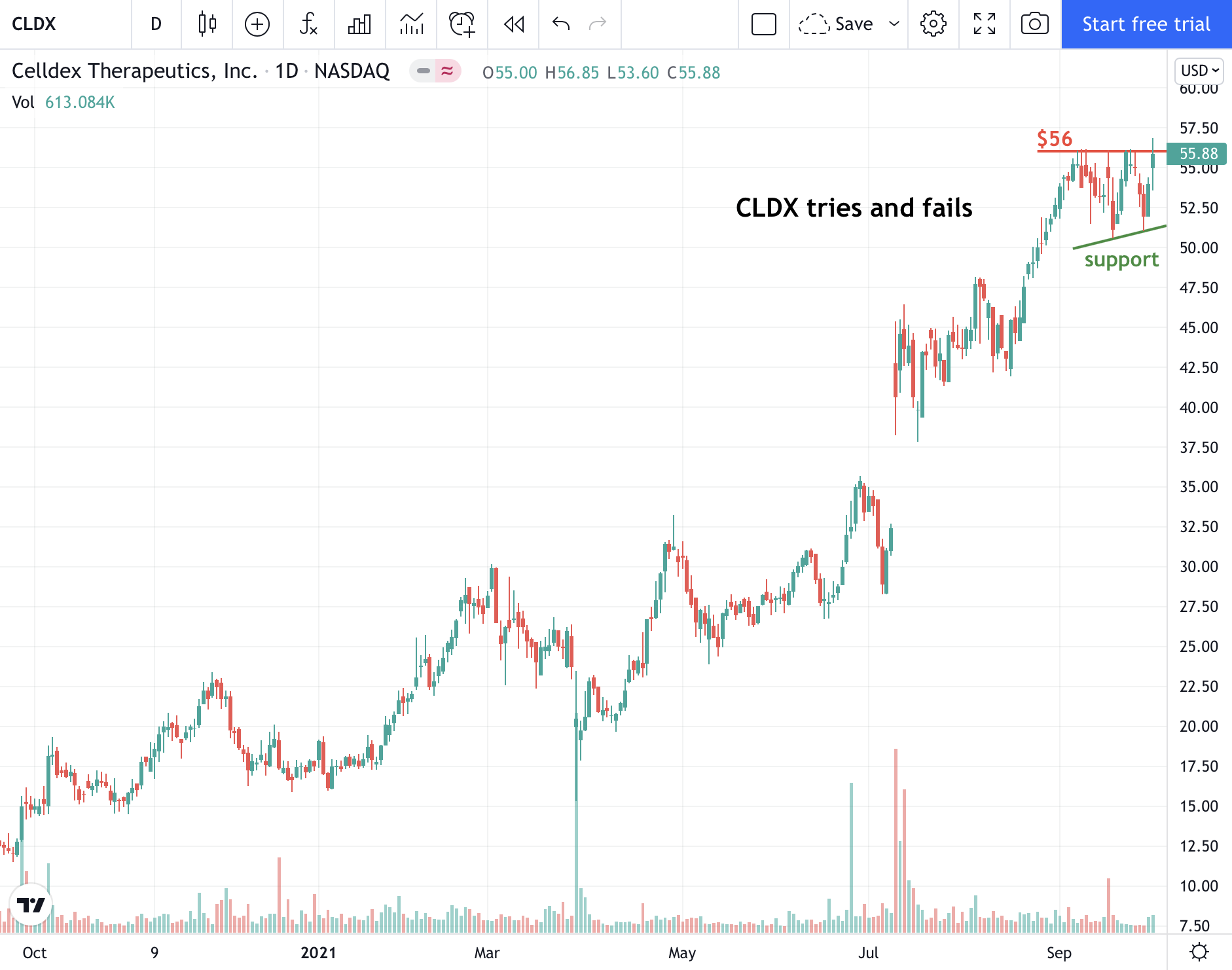 Chart of CLDX provided by TradingView

CLDX has stalled at the $56 resistance area (red) multiple times over the past few weeks, while also starting a potential trend line of support (green). These two lines have created an ascending triangle on the stock.

Eventually, CLDX will have to break either the $56 resistance, as it tried to do on Friday, or the triangle support.  A long trade could be made on a break above $56. A break below the trendline would be an opportunity to enter a short trade.

The post Is Celldex Therapeutics Headed for a Breakout? appeared first on StockNews.com