"My strategy is to continue to build on the solid relationship between the UAE and France, building bridges, and furthering cooperation."

This article is a part of the 2021 installment of Entrepreneur Middle East's annual Achieving Women series, in which we profile female leaders of note in the MENA region. The full series can be seen in our October 2021 issue here.

H.E. Hend Al Otaiba was appointed as the UAE’s Ambassador to France in July this year, and while it has only been a few months since the start of her tenure, the significance of the role she currently essays is something that she holds very dear to her heart. “I am a mother of two beautiful boys, Khalid and Mana,” she reveals. “Waking up every morning and seeing them reminds me of the duty and role that our leadership has entrusted me with; they are constant reminders of what I am striving for, and that is the future of our country, embodied in the generations to come.”

It’s this principle that Al Otaiba seems to have used to govern her career so far, which has been centered around the field of communications, for the most part. “I was always interested in telling the UAE story to the world, and building bridges between cultures,” she says, as she recalls how she started off her career overseeing cultural programs for Abu Dhabi’s Tourism Development and Investment Company, including that of the Louvre Abu Dhabi.

Al Otaiba then went on to work for Abu Dhabi Media as a Director of Strategic Communications, following which she became an advisor for the UAE Minister of Foreign Affairs and International Cooperation, H.H. Sheikh Abdullah bin Zayed Al Nahyan. She was then tasked with building and heading the Ministry’s Strategic Communications Department, which oversaw all of the communications of the UAE’s foreign policy agenda, and that was her last role before becoming the UAE’s Ambassador to France. 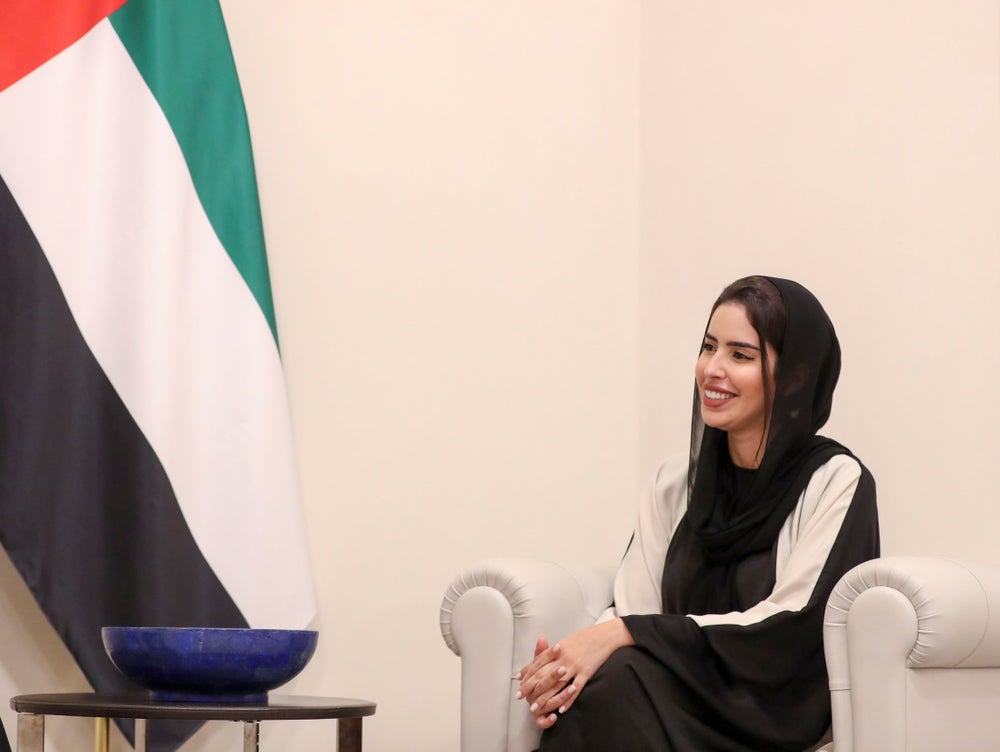 Looking back, Al Otaiba freely admits that she couldn’t have realized the success she saw in her career, had it not been for the support she received through its course. “I believe I am where I am today, because of the faith the leadership has placed in the dedication and commitment I provide my career with,” she says. “I believe it is important to be passionate about what you do, in order to serve well. In my case, serving my country has been the key driver, and coupled with the support I received from the leadership, I have found a large space to thrive. With respect to the key lessons I have learned along the way, I see collaboration, and the building of allies based on mutual interest, as very important. It is also important to make adequate assessments to every scenario or issue faced.”

When asked if she had any particular challenges to face at her work on account of her being a woman, Al Otaiba replied in the negative. “I am very proud of my country’s support of women’s empowerment, and I view the UAE as a leader in this field, not just regionally but globally,” she says. “I have not faced any issues in my career due to my gender; in fact, I was presented with much more opportunities and respect.”

Al Otaiba has plenty of examples to support her assertion that Emirati women like herself find themselves with more advantages than disadvantages in the UAE. The country’s cabinet, for instance, currently has nine female ministers, while women’s representation in its parliamentary body, the Federal National Council, has been set at 50%. Al Otaiba also notes that 66% of government employees in the UAE are women- 30% at a leadership level, and 30% in the diplomatic corps.

“Emirati women have also attained positions throughout the professional field, established themselves as formidable entrepreneurs, forged individual creative paths, and shattered barriers by entering into typically male-dominated fields, such as race-car drivers, mountaineers, pilots, car mechanics, and internationally successful athletes,” she adds. “Emirati women have been part of all major national projects, including the Emirates Mars Mission (Hope Probe), representing 34% of the Hope Probe mission, and 80% of its science team.”

Pleased to welcome HH @MohamedBinZayed to Paris today and to meet President @EmmanuelMacron. The visit today reinforces the strategic relationship between the UAE and France as our cooperation continues to strengthen across all areas of cooperation. pic.twitter.com/c9FIxfJXzZ

Al Otaiba can certainly add herself to the list of Emirati women breaking new frontiers- indeed, her appointment as the UAE’s ambassador to France marks the first time the country has ever named a lady to this particularly prestigious post. The announcement was greeted with much fanfare in the UAE and beyond, and Al Otaiba was seen putting her diplomatic chops to good use almost immediately in her new role. “Since my appointment as the UAE’s Ambassador to France, in the short amount of time that has passed, it is not an understatement to say that my experience has been fruitful,” Al Otaiba reveals.

“I have had the pleasure to meet my counterparts, key French decision makers, as well as members of the cultural scene. My strategy is to continue to build on the solid relationship between the UAE and France, building bridges, and furthering cooperation. The people-to-people component is also an important area of focus for me, as we share many aspirations and values. It is important to note that shared ideals of coexistence, commerce, and culture are at the heart of the five decades of close and enduring UAE and France ties.”

Al Otaiba points out here that the UAE is celebrating its golden jubilee this year, and the country is already committing wholeheartedly to safeguarding its next 50 years. This has been clearly indicated by the recently announced “Projects of the 50,” which Al Otaiba describes as a series of “ambitious initiatives” aimed at boosting the development of the UAE. “Since its independence in 1971, and thanks to our leadership’s vision, our country achieved a series of unprecedented successes, building a modern and diversified economy, infrastructures, providing education, health, security, and stability for its citizens,” she explains.

“Our ambition, the ambition of the ‘Projects of the 50’ initiative, is to continue this path.” Al Otaiba adds here that “Projects of the 50” will see the UAE government injecting US$13.6 billion into the economy in 2022, and $150 billion by 2030, which, according to her, means that now is an extremely opportune time for anyone who wishes to start or invest in a business in the country. “If I have one message to send to entrepreneurs, it would be to come and see with their own eyes, as to what can be achieved in the UAE,” Al Otaiba concludes.

1. You are your greatest resource. “Work on self-development, and do not shy away from taking opportunities. It is important to also seek help where required.”

2. Know your worth (and demand it). “I encourage women to be outspoken, and claim their right space in society.”