Dusting Away Challenges: KAUST-Based Talon Dust Control Is Looking To Become A Market Leader In Its Field In Saudi Arabia

Talon Dust Control's mission is simple: to negate the operational, maintenance as well as health-related challenges that arise due to poor industrial or on-site air quality.

By Aalia Mehreen Ahmed November 9, 2021
Opinions expressed by Entrepreneur contributors are their own.
You're reading Entrepreneur Middle East, an international franchise of Entrepreneur Media.

If you’ve ever spent a few minutes very close to a construction site or had the misfortune of being around an unpaved road or a stockpile, chances are you’ve had to cover your nose and eyes to protect yourself from the massive levels of dust in the air. This issue, commonly referred to as “dust lift-off," is innate to many industries, due to the laborious operations and machinery involved. To solve this particular issue, Saudi Arabia-based startup Talon Dust Control has come up with environmentally-friendly and 100% locally-made solutions that are daring to reimagine the way dust control has been done so far.

The startup was launched in 2019 by Shahzad Ghauri and Dr. Mohamed Omar, who are graduates of King Abdullah University of Science and Technology’s (KAUST) TAQADAM accelerator program. The two men also have career backgrounds in environmental protection and sustainability. With Talon Dust Control, their mission is simple: to negate the operational, maintenance as well as health-related challenges that arise due to poor industrial or on-site air quality.

Using five distinct non-toxic, liquid spray-on products, that control dust and prevent dust accumulation, the KAUST-based startup works across sectors such as aviation, construction, military, outdoor entertainment as well as solar farms. “We exist to help our clients improve their financial, health, safety and environmental performances where dust needs to be managed,” explains Ghauri, who is also the startup’s Chief Technology Officer. “Dust creates a lot of risk in terms of operation, maintenance, and the amount of water used to control dust is also massive. So, that is why we exist: to reduce the costs caused by dust!”

Now, using water is the most common method of dust control globally, and especially in the Middle East. But for a country that is already running on scarce water resources, this method can entail major repercussions. Which is why ensuring the reduction of water usage is a very pivotal and major differentiating aspect to Talon Dust Control’s solutions. At this point, for the layperson reading this, it is perhaps imperative to put things into perspective by looking into what existing studies say about this method.

According to multiple reports, a typically hot and dry area (which is characteristic of Saudi Arabia’s prominent terrain) would require about four liters of water on every square meter of land every single day. If you do the math, it isn’t difficult to gauge just how much water would be required for an entire stretch of road or land. Omar, who holds the position of the Chief Business Officer, insists that this was a major driving factor when it came to creating Talon Dust Control. “There is this huge environmental impact because the traditional way of controlling dust was always using water, and water needs to be produced from all kinds of energy-intensive processes, especially in this region,” he explains.

He further adds that by reducing water wastage, his startup’s values also align with those of Vision 2030, wherein increasing sustainable development is a key goal for the Saudi Arabian government. “For us to be controlling dust directly translates into improved health and wellbeing, and less water being used which means water will be available for agriculture and green initiatives,” says Omar. “Instead of throwing four liters of clean or relatively clean water every day, we can reduce water usage by 90%. Anytime we do that, it directly contributes to Vision 2030 and sustainable development goals.”

Related: Entrepreneurship, Community, And Confronting The Fear Of Failure 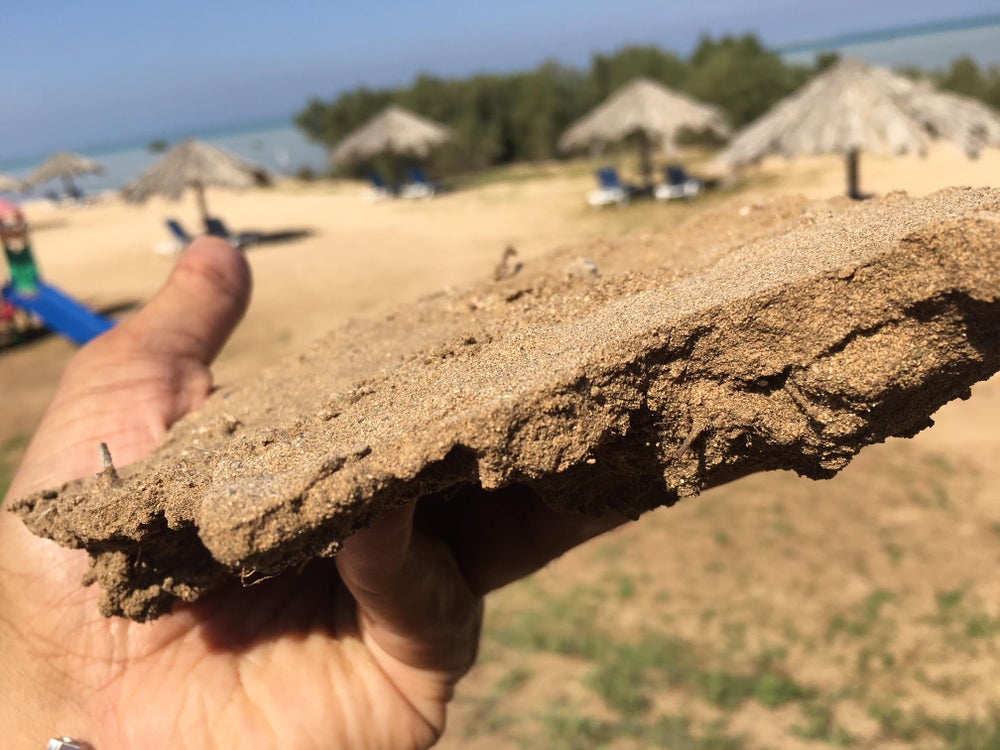 Here, Ghauri chimes in with a couple of other factors that make Talon Dust Control’s solutions environmentally friendly. “Our products are more than 95% less in weight as compared to traditional dust control equipment available in the market,” he says. “By using less material, our carbon footprint is also much less. Also, when you compare against the alternatives like roads that use asphalt, petroleum and hydrocarbons or grass that uses a lot of pesticides and fertilizers, our dust control products are less toxic and fully inert and biodegradable.”

But being environmentally sustainable is only one aspect of what Ghauri and Omar are targeting. Increased dust emissions are often known to cause problems such as increased risk of fire and dust explosions, decreased on-site visibility levels and very high site maintenance and cleaning costs. Talon Dust Control’s solutions help in negating these operation and maintenance-related issues. There is also, of course, the very obvious health component when it comes to prolonged exposure to dust. “In terms of human health, you have respirable and inhalable dust, the latter of which goes into your upper airways and respirable dust that goes all the way into your lungs,” explains Ghauri. “Dust can cause lung infections, eye infections, and absenteeism. So, our solutions aim to protect workers in an operational environment and also help our clients save operational costs, improve the local air quality for people's health, and reduce any accidents.”

With all these branches to its business model, there are already some factors that can be touted as the startup’s unique selling point (USP). But it is Talon Dust Control’s ability to offer options that are out of the ordinary that is its biggest USP, says Omar. “We are adding value in terms of knowledge transfer and educating people on their options which is something that hasn't been done in this part of the world,” he says. “We are cheaper, for sure, in some ways, and are completely locally made. So I think we are differentiating from our competitors in many ways.”

It is the knowledge transfer component that Ghauri believes led to Talon Dust Control’s biggest project yet: an agreement signed with General Electric (GE) to provide turn-key dust control solutions for the roads that service GE’s concentrated solar power (CSP) plant in  Saudi Arabia. Notably, this deal happened through the course of the COVID-19 crisis, with the GE team reaching out to Talon Dust Control based on what they’d read and heard about the startup.

“The CSP plant was built as part of KSA's commitment to renewable energy,” explains Ghauri. “The people at GE wanted to feel confident that they would be looked after by a business that understands their needs. Because we come from the same operational and environmental background, we could speak the same language as them.” And it is this sharing of knowledge, solutions and options which ensured that the project was a success, says Ghauri. “Successful delivery of the project resulted in less local dust generation and improved solar mirror cleaning, increased solar energy yield, significantly less capital expenditure compared to traditional asphalt road construction, rapid application and therefore less operational downtime of the solar field roads.”

With this project delivered to GE, there is an air of confidence with which Omar and Ghauri want to move forward. But this strong sense of belief in their shared vision was established long before GE came along. During their time at the TAQADAM accelerator program, Talon Dust Control was among the six major winners of its cohort.

That eventually led to the startup making it to the Saudi National Finals of the Entrepreneurship World Cup (EWC), a pitching competition that is held in different locations globally by three co-host organizations– Misk Global Forum, Global Entrepreneurship Network and The Global Education & Leadership Foundation. In this competition too Talon Dust Control triumphed, emerging as the overall winner among 14 startups from across the country. “I don’t know if we should brag about it, but we were both number one in Saudi Arabia and among the top winners at TAQADAM,” says Omar, humbly. “Winning the EWC and the fact that major clients like GE are now approaching us is truly a testimony to how well TAQADAM has prepared us.”

Both co-founders’ gratitude towards the accelerator program is evident when they say they wouldn't have made it this far had it not been for TAQADAM and the nurturing community of startups and entrepreneurs at KAUST. “Both of us had been working on this dust issue merely as a concept, but it was TAQADAM that took us to a completely different level in terms of improving our processes and thinking as a startup,” says Omar. “We were, and still are, KAUST-based. So I think without them, it would be fair to say that this would have been almost impossible to do.”

It is this humility that is displayed when asked what is next for Talon Dust Control. “Although we are a very young company, we've been approached by some serious companies and investors, who not only showed interest but were ready to buy equity in the company, but we have had to say ‘we are not there yet,’” says Omar very honestly. According to Omar, the startup still needs a few more years in the market before they can even begin to consider such proposals.

Ghauri, however, makes one aspect about the startup’s future very clear: they are not moving out of Saudi Arabia! “The total addressable market in the MENA region is extremely large, and as the business grows, we can definitely set up partnerships; but we are committed to Saudi Arabia,” he says. “This country gave us this opportunity, and we'll keep the headquarters here forever.” And that perhaps explains the ultimate aim of Talon Dust Control. “Dust control has to be local!” concludes Ghauri. “Because otherwise you are losing so much of your sustainability advantage and are adding to the carbon footprint.” With the startup already in talks for a project with ARAMCO, and having plans to eventually get export licenses that will open doors to other markets in the MENA region, the future for Talon Dust Control looks extremely promising.

It's All In The Genes: Genomic-Tech Company NoorDX Is Addressing The Lack Of Localized Genomic Testing In Saudi Arabia

To Future-Proof Healthcare, Collaboration Between The Public and Private Sectors Is Key