By David Cortright December 9, 2021
Opinions expressed by Entrepreneur contributors are their own.
You're reading Entrepreneur India, an international franchise of Entrepreneur Media.

Verticroft holdings is an innovator in the UAE for vertically integrated food security solutions, with a solid track record of producing some of the best lamb meat in the world, especially in a country where most people thought it was impossible. Verticroft creates IoT-based growing facilities that produce fresh green feed 365 days a year, irrespective of the harsh climate, for livestock rearing. Verticroft’s CEO is the eccentric and serial entrepreneur, Ryan Singlehurst.
Who is Ryan Singlehurst? 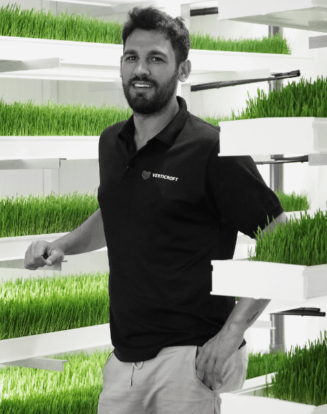 Ryan Singlehurst is a serial entrepreneur who has made contributions in a variety of fields.

Ryan's areas of expertise include finance, sales, and marketing. After leaving school at the age of 17 and serving three years in the British parachute regiment, Ryan began his career at a little-known commodity trading floor in Spain. In 2010, Ryan founded Inari Capital Limited, a consultancy firm offering sales, marketing, and structuring services with a focus on the Agritech space.

The innovative businessman has trained thousands of successful sales and business development executives through training academy, and has developed & implemented sales and marketing strategies for businesses selling over 150 million USD in goods and services.

The founder and CEO of Verticroft Holdings also founded Sample Me App, which he sold to private equity in 2016, as well as Ofika Group, Eastern Europe's fastest-growing subscription print company, and is now fully devoted to ensuring food security in the Middle East.

Verticroft Holdings - The Innovative Solution to an Agricultural Problem

In 2017, Ryan asked his team if they could create a sustainable and affordable source of animal feed produced locally and sustainably in the middle east. He also asked them if they could use that feed to produce livestock and create an economically viable agriculture sector in the UAE, where as of today 90% of all meat is imported.  Before asking his team these questions, Ryan had discovered something unique about the GCC - it is the only part of planet earth where agriculture makes up such a small part of each individual country’s GDP. The GCC consists of countries with a strong need for food security coupled with the uneconomically viable conditions of their location.

Ryan saw an opportunity to solve a major challenge in the UAE. The task was daunting and arguably impossible, but Ryan was determined to create a solution. In 2018, he started work on this project. He opened an R&D facility to develop hydroponic systems that could grow hydroponic feed with which he could run feed trials with different animals. He built two of the systems directly opposite each other in a  warehouse, in Madrid, Spain - this was all done within three months of establishment. At some point, he discovered the labor force was lacking and knew it was going to be an issue as their feed at that point in time had become to expensive. So, he went to Madrid where his labor force spent time growing grass to ensure they could deliver daily feed for the livestock.

Some of the most important things Ryan took into consideration were scalability, ease of management and consistency. Many experiments and tests were done, with and on the system, The team built 30 variants of the system and a number of tests and experiments were carried out before one variant was selected for use at Vertifcorft.

Almost as soon as system testing had begun in Spain, the farmers and vets started to give their positive feedback, pleased with the response of their animals to the feed. At this point, Ryan knew he had created a system that would work in the GCC.

Ryan created something seemingly impossible, from scratch, in the middle of the desert. Today, what started off as a spontaneous idea is now the largest sustainable sheep farm in the GCC, providing a major solution to food insecurity in the GCC and producing some of the world’s finest lamb.

When asked why he didn’t create this solution in a part of the world where introducing a vertically integrated food system would have been much easier, Ryan responded by saying “There is no other place in the world that imports as much lamb as the GCC on a per capita adjusted basis. The way I see it, is that there is a 3 Billion Dollar gap to fill. That 3 Billion Dollars is untapped in a no-competition market”. We plan on being the first vertically integrated food security company to list on a stock exchange in the GCC by 2024.  Ryan recognised a problem, and built a vertically integrated solution, to a major problem.