Using online targeting techniques, Override's algorithm can tailor a brand's message for the people that will most likely respond to it, whether they're on the road or stuck in traffic.

By Pamella de Leon February 15, 2022
Opinions expressed by Entrepreneur contributors are their own.
You're reading Entrepreneur Middle East, an international franchise of Entrepreneur Media.

While out-of-home (OOH) advertisements are a common sight on billboards and public transportation, it appears that there’s also an opportunity to monetize portable digital ads displayed on the top of cars itself, where the content can be viewed by drivers, passengers, and pedestrians alike. Taking the plunge into tapping this opportunity is Override, a KSA-based digital billboards startup that is offering an even more valuable feature: data and hyper-targeted geofenced advertisements.

Using online targeting techniques, the company’s algorithm can tailor a brand’s message for the people that will most likely respond to it, whether they’re on the road or stuck in traffic. For example, if a vehicle enters a business district, an airline’s ad would promote business class tickets, but as soon as the screen moves to an area with a heavy student population, the airline’s ad would switch to showcase economy class tickets with student-specific discounts.

Founded in 2020, leading Override are Ibrahim Ibrahim and Oliver Schmid, whose backgrounds are in technology and digital media, and they also have entrepreneurial experiences to boot. The concept for Override started from the duo’s fascination with the shared economy, and how anyone can generate passive income from goods they own that others would want to utilize. While driving in the US, Schmid came across an ad on navigation app Waze, directing him towards the nearest exit with a McDonald’s that’s running a breakfast promotion. 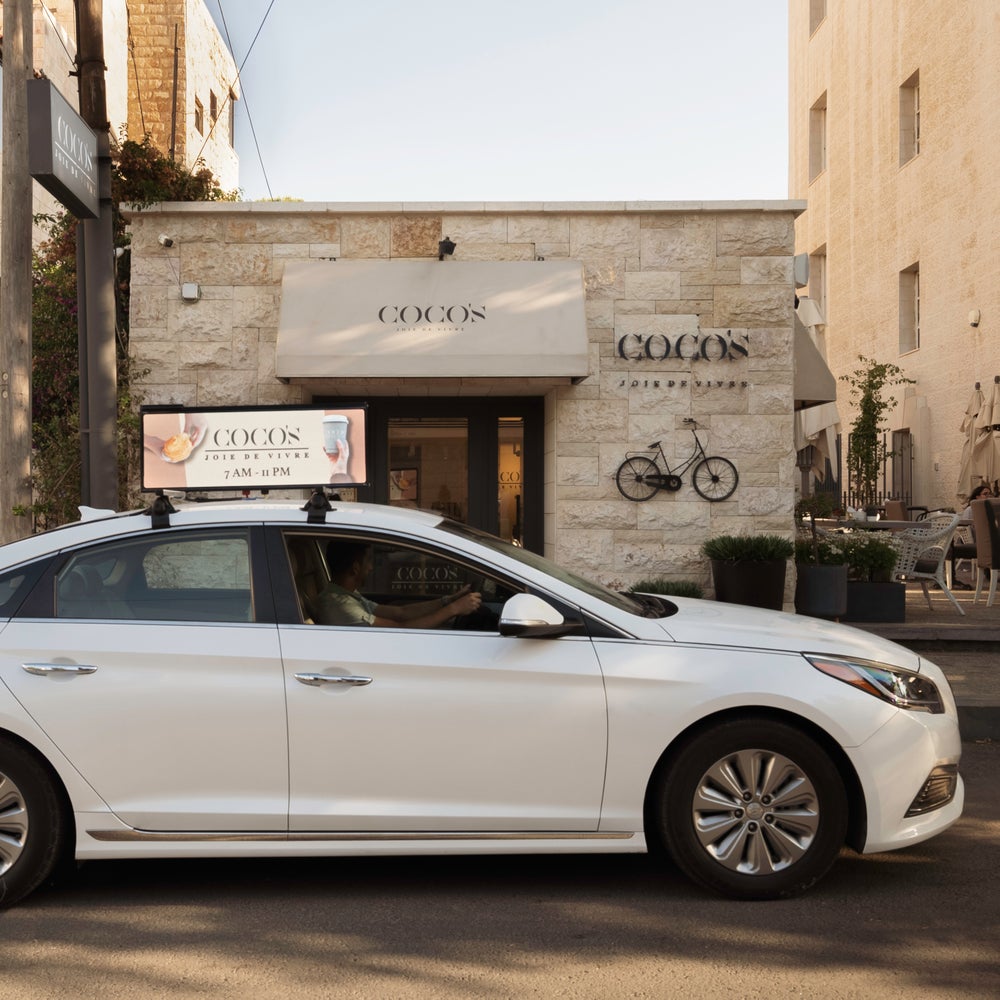 He thought it was clever to utilize geofenced advertising -which involves using GPS technology to create a virtual geographic boundary software to enable a response when a mobile device enters or leaves a particular area- for people on the go. “It was a time when Schmid and I were becoming increasingly more aware of how advertisements had paved their way into many dimensions of people’s lives,” Ibrahim recalls. “But the advertising business model remained focused entirely on corporations managing the media and reaping its benefits.”

Deciding to launch the venture together, the duo conducted further research and talked with advertising heads from leading brands in Europe, Middle East and North Africa (EMENA). They noticed that advertisers were in dire need for relevant OOH advertising, as traditional OOH lacks hyper audience targeting and measurable results. And that’s how they settled on what would become Override’s current USP. “We combine location-intelligence with audience data to understand the mobility behaviors of people,” Schmid explains. “We know, for instance, that people who frequent a particular area are more interested in luxury goods or expensive retail than others.”

Unlike its regional competitors that base their campaign reports on historical traffic data, Override’s advertisers will be equipped with a single-point platform to plan, publish, optimize, and track their campaigns’ performance in real-time. “Brands will no longer have to settle for outdated analytics based on predictions of traffic patterns, but rather, receive measurement studies that evolve with the world around us,” Ibrahim points out. “Most other players in OOH employ this methodology to price their media, but people do not behave that way… We’re also working with a pioneering transit media measurement provider to give brands rich insight on the impressions their ads garnered throughout their campaigns.” 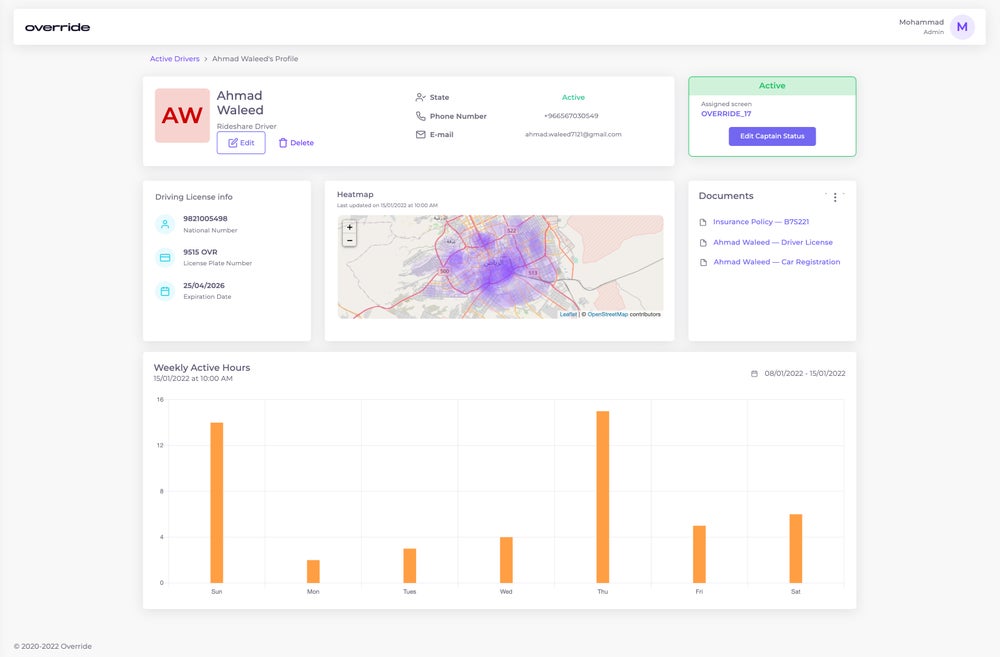 Besides filling a gap for advertisers in OOH, Override’s co-founders are also keen on providing another source of income for ride-sharing drivers on roads today. The co-founders’ research had come to the following conclusion: ride-share drivers spent an average of more than eight hours on the road every day, yet they were always in need of more income, and digital ads could be a passive source of the additional revenue they need. Along with enabling advertisers to reduce costs, Override aims to help increase the monthly income of rideshare drivers with a passive revenue stream.

At the moment, the compensation is on a flat-rate monthly fee, but Ibrahim states that they are working on implementing a more sophisticated model that accounts for total miles driven and time-of-day, as well as surges that will incentivize drivers to increase their pay. Moreover, it’s worth noting that Override’s screens are also outfitted with humidity, noise, and pollution sensors, allowing the team to gather valuable insights, which they plan to offer to government entities for better smart city planning. “We hope for Override to leave a footprint in the world of urban living, and one of the most tangible ways we feel we can do this is by helping governments learn more about their cities,” says Ibrahim.

Related: UAE-Based Enterprise FortyGuard Makes Use Of Cutting-Edge Tech To Tackle One Of The Middle East's Most Pressing Climate-Related Issues

Having KSA as its launch market was a result of the team’s extensive geographical feasibility study, says Schmid. Looking at over 20 cities, the team weighed metrics based on their vitality to Override’s success, and Riyadh ended up becoming their pick. A prime reason is Override’s alignment with Saudi Arabia’s Vision 2030, as well as The Line, a proposed smart city in Saudi Arabia.

Schmid states, “Override’s position as a pioneer in the transit advertising space leads the way in these programs as it aims to increase the monthly income of 500 Saudi male and female drivers within the first year, provide municipalities with intelligent data to build smarter cities, and overall, grow the Saudi market by giving brands more real estate to develop personable connections with their consumers.” Though they faced hurdles initially with respect to the legality of advertising on vehicles, Schmid states that Override is now ready to take over Saudi’s streets.

From software engineers to product managers and UI/UX designers, Override is currently running with a team of seven members as a bootstrapped startup. “The technology that Override employs is intricate and multi-layered- our business model relies on more complexity than just placing a digital display on top of a vehicle,” Schmid notes. Taking into various factors such as the durability and aerodynamics of the displays, ability to geofence properly, and data fetching and analysis, the team extensively tested its technology to identify potential hurdles.

In doing so, they hit quite a few milestones, according to Schmid- including iterating display designs, targeting ads down to the street level, and streamlining the installation process, to name a few. They also managed to establish relationships with several leading media buying units across MENA and joined the World Out of Home Organization as its first Saudi member, alongside leading global players in OOH.

As for what’s next, Schmid reveals that the company is currently raising for its first round of financing from institutional investors, and perhaps more importantly, it is also working towards creating a regulatory shift in the Kingdom. “This means upgrading the existing laws to incorporate our medium of advertising and eventually launching on rideshares and taxis in Riyadh,” he says. The team plans to grow operations in Riyadh and start expanding to other markets in KSA, followed by other EMENA countries such as Egypt and the United Kingdom.

And the end goal? Override wants to work with governmental bodies to fully pursue its vision of making transportation free. The duo accepts that this is a huge ambition, but Schmid says, “Our vision was created in line with our mission: to make transit media an engine for human betterment. We stand by our belief that advertising can help make transportation more affordable, and one day, free.”

He continues, “This is evident from the power of advertising today- if you think about it, advertising is the reason many of the things we use every day are free. TikTok, YouTube, Facebook, and Google are all examples of how advertising can benefit our lives. We believe through transit advertising; we can lift off the fare for people’s trips. Imagine this: you order a taxi, just to pleasantly discover that it’s US$3 cheaper than you expected. All of a sudden, the world becomes smaller, allowing people to reach and access newfronts- literally and figuratively. In an age of more connectivity, the potential for evolution and novelty through accessible mobility are endless.”

'TREP TALK: TIPS FOR ENTREPRENEURS FROM THE CO-FOUNDERS OF OVERRIDE

Seek discomfort “I experienced immense growth when I sought discomfort by pursuing crazy ideas, and witnessing what existed on the other side of fear. Create a company culture that avoids making fear-based decisions, and hold one another accountable for it.”

Don’t waste time “’Time is the most valuable thing, it’s the only nonrenewable resource.’ Brene Brown said this first, and I couldn’t agree more. The success of anything you build rests on what you do with your time. Be your time’s best guardian, the rest will follow."

Develop your network “Building a network is a daily pursuit: we’re social beings by design, so it makes a lot of sense for progress to be facilitated through a network. But this isn’t a thing that has a beginning and an end, it’s a daily act. You should take a step everyday towards building your network.”

Experiment and learn “Find the balance between discipline and surrender. It’s easier said than done, but that’s the key to unlocking great creative potential. I’ve found that our best ideas came about when we were able to arrive at a balance between strategic planning and playful experimentation.”