Bringing The World To Saudi: A New Entrepreneur Middle East Report Looks Into Saudi Arabia's US$1 Trillion Investment In The Tourism Industry

The special report details how Saudi Arabia is evolving and developing its tourism sector from catering nearly exclusively to religious tourism in the past, to opening its doors to visitors from around the world in 2019 through major investments made in leisure tourism.

By Erika Masako Welch May 10, 2022
Opinions expressed by Entrepreneur contributors are their own.
You're reading Entrepreneur Middle East, an international franchise of Entrepreneur Media.

Entrepreneur Middle East, in partnership with Lucidity Insights, has published a special report sponsored by Saudia titled, Bringing the World to Saudi. The special report covers the Kingdom of Saudi Arabia’s vision for tourism, and how the country sees it as the single most important sector to help realize its Vision 2030, and diversify the Kingdom’s economy away from oil reliance, create new jobs, and lower unemployment.

The special report details how Saudi Arabia is evolving and developing its tourism sector from catering nearly exclusively to religious tourism in the past, to opening its doors to visitors from around the world in 2019 through major investments made in leisure tourism. Globally, tourism accounts for 10% of the global gross domestic product (GDP), and it also contributes to 8% of employment around the world. Leisure tourism accounts for 55% of all tourism activities around the world, and as such, the Kingdom has promised to invest an additional US$1 trillion into the Saudi tourism economy over the next decade, on top of the billions that it has already invested in the past five years.

Though the COVID-19 pandemic has forced the Kingdom to adjust their strategic focus on domestic tourism (like so many other countries around the world that were required to close its borders), no adjustments on their larger 2030 targets have been made; if anything, the Kingdom is more bullish on the speed with which it will grow its tourism sector. Today, Saudi Arabia is more committed than ever to achieve their 2030 tourism targets, which include welcoming 100 million domestic and international visitors annually at tourism sites around the Kingdom by 2030. By 2030, the Kingdom expects that tourism will contribute at least 10% of the country’s GDP, which could mean a $186 billion tourism economy.

Related: Saudi Arabia Has The Potential For Incubating A New Breed Of Entrepreneurs 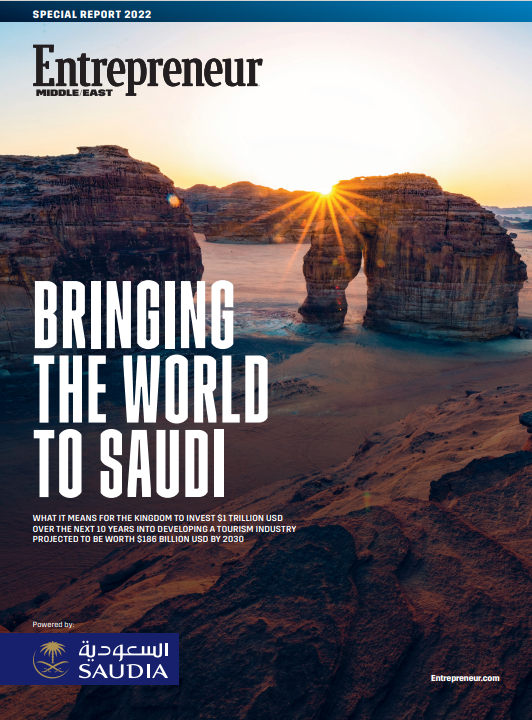 More recent statements made by the Saudi Arabia Minister of Tourism, H.E. Ahmed Al Khateeb, seem to indicate that the new target is 15%, which could mean a tourism economy generating more than $279 billion each year. This will be a formidable achievement if attained, as 2016 estimates placed Saudi Arabia’s business, leisure, visiting friends and relatives (VRF), and religious tourism at 3% of the Kingdom’s GDP. In 2021, as the world finally began its recovery from the pandemic, Al Khateeb noted that the Kingdom’s tourism sector was on track to achieve 4% of GDP.

This Entrepreneur Middle East special report tells the layered story of how opening up to global tourism will not only help the Kingdom achieve economic stability and wealth, but help the country become a great place to live, work, and play, while also directly creating a million jobs for young Saudis. In fact, the nine mega-projects and giga-projects announced between 2016 and 2020 alone expect to generate 600,000 new jobs. The report also details the major stakeholders helping to realize this new vision of Saudi Arabia, including the national carrier, Saudia, along with the Ministry of Tourism, the Saudi Tourism Authority, and the Saudi Motorsport Company.

The report also highlights the various leisure tourism projects under development in the Kingdom over the past five years, and the progress on major tourism development projects around the Kingdom. Notes have been included on the Kingdom’s emphasis on developing adventure and cultural holidays to places like Saudi’s Arabian Highlands in the southwest Asir Region, or its “Grand Canyon” like the UNESCO World Heritage Sites of Hegra in Al’Ula in the Kingdom’s northwest. The special report also underscores the importance of the development of both an entertainment and sporting industry in the Kingdom, both in their nascent stages, but expected to have a similar trajectory as the Kingdom’s leisure tourism sector. It also features an interview with the CEO of the Saudi Motorsport Company to illustrate the importance of the Formula One Saudi Arabian Grand Prix, along with the many other motorsport events the Kingdom is playing host to, in order to drive tourism.

At the end of the day, this is a renaissance story of ambition and legacy for the Kingdom of Saudi Arabia. As Saudi Arabia invests over $1.5 trillion into tourism projects across the country, it becomes clear how the Kingdom is strategically using tourism as one of its Vision 2030 cornerstones. Saudi Arabia expects tourism to help the country diversify its economy away from an unhealthy reliance on oil; it is using the tourism sector as a way to open up the country to welcome foreigners, to invest in its infrastructure, cities, and even more rural regions. Moreover, tourism is expected to contribute significantly to lowering unemployment figures, and provide new jobs in not just the tourism sector, but adjacent sectors such as construction, transport and logistics, events management, sports and entertainment.

To learn more about how the Kingdom is “bringing the world to Saudi,” check out the report for yourself by downloading it here.