Is First Majestic Silver Corp. a Buy Under $10?

Silver mining company First Majestic Silver Corp. (AG) has reported a sequential decline in its production in the first quarter of this year. AG’s shares have slumped more than 20%...

By Subhasree Kar May 11, 2022
This story originally appeared on StockNews

Silver mining company First Majestic Silver Corp. (AG) has reported a sequential decline in its production in the first quarter of this year. AG’s shares have slumped more than 20% in price this year, closing the last session at less than $10. Furthermore, BMO Capital analyst Ryan Thompson has lowered the price target on the stock. So, would it be wise to bet on the stock now? Read on.

Headquartered in Vancouver, Canada, First Majestic Silver Corp. (AG) acquires, explores for, develops, and produces mineral properties, focusing on silver and gold production in North America. AG shares have declined 47.2% in price over the past year and 40.1% over the past six months to close yesterday’s trading session at $8.35. The stock has slumped 24.8% year-to-date. Furthermore, BMO Capital analyst Ryan Thompson lowered his price target on the stock while maintaining his Market Perform rating. The analyst also reduced his EPS expectation for the first quarter of this year.

The company produced 7.2 million silver equivalent ounces, consisting of 2.6 million ounces of silver and 58,892 ounces of gold, in the first quarter.  Its total production increased 59% year-over-year, due primarily to the acquisition of Jerritt Canyon, but decreased by 16% sequentially due to high absenteeism related to an increase in COVID-19 cases in January and February, which resulted in lower processed tonnes across all Mexican operating units. Also, Thompson stated that AG’s consolidated gold and silver production for the quarter missed estimates by 14% and 19%, respectively.

AG has been trying to ramp up its operating capabilities at its mines, and “many of these efforts are expected to begin showing positive results in the second half of 2022 as we bring two past-producing underground areas, West Generator and Saval II, back into production,” said Keith Neumeyer, President, and CEO. 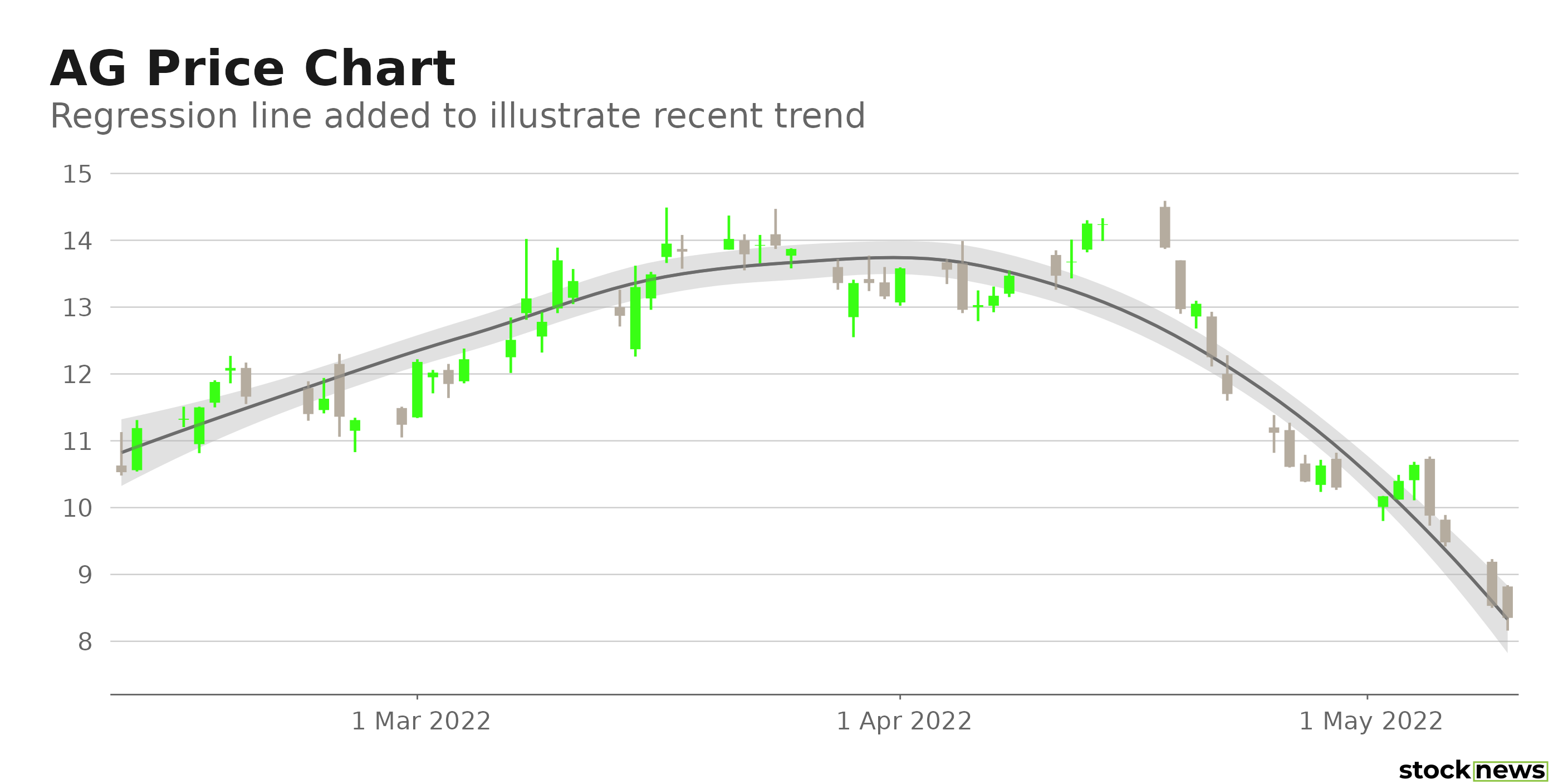 Here is what could shape AG’s performance in the near term:

AG has an overall D rating, which translates to Sell in our proprietary POWR Ratings system. The POWR Ratings are calculated by considering 118 distinct factors, with each factor weighted to an optimal degree.

The stock has a D grade for Quality, consistent with its bleak profit margins.

AG has a D grade for Value. Its stretched valuations justify this grade.

Among the 10 stocks in the F-rated Miners - Silver industry, AG is ranked #8.

Beyond what I have stated above, you can also view AG’s grades for Sentiment, Growth, Momentum, and Stability here.

View the top-rated stocks in the Miners – Silver industry here.

Geopolitical issues and rising inflation are fostering  major uncertainty on Wall Street. Many investors consider silver and gold mining stocks a safe haven amid market turbulence and a hedge against inflation, which could attract renewed attention to AG. However, considering its fundamental positioning, I think the stock is not worth buying now.

The post Is First Majestic Silver Corp. a Buy Under $10? appeared first on StockNews.com