By Pamella de Leon May 24, 2022
Opinions expressed by Entrepreneur contributors are their own.
You're reading Entrepreneur Middle East, an international franchise of Entrepreneur Media.

As any university student can attest, it can be annoyingly perplexing to manage college credits along the way to one's graduation. While it's a crucial step in this process, it can be incredibly difficult, and that's essentially what led the co-founders of Stellic, a fully integrated planning and advising platform to help students seamlessly plan their college journeys, to build their Qatar-born venture, which secured a Series A funding round of US$11 million at the end of March this year.

Headquartered in San Francisco, Stellic's story begins with a group of students wanting to find their own solutions to problems they faced on a day-to-day basis. While attending Carnegie Mellon University in Qatar (CMU-Q), a Qatar Foundation partner university, co-founders Sabih Bin Wasi, Rukshar Neyaz and Musab Popatia remember finding themselves overwhelmed and confused by the lack of access to tools that would help them manage degree requirements and options available to enhance their experience as students. "I had tons of transfer credit from Pakistan, Musab wanted to graduate in three years without financial constraints, and Rukshar was looking to convert her computer science major into electrical engineering," recalls Bin Wasi, co-founder and CEO.

Stellic thus began as a student project, with the founding team digitizing their extensive course catalog into a planner that could "capture our context as well as CMU's complex graduation requirements and lay out a personalized completion pathway." But the trio soon realized that their then-small solution could solve bigger issues in higher education. "With increase in student diversity, complex graduation requirements, and a decrease in campus resources, it was even harder for college advisors to take care of their hundreds of advisees," Bin Wasi explains.

"Registrar offices were spending an entire semester trying to "audit' each graduating senior's progress to ensure diplomas were correctly awarded, without which, their accreditation was at risk… And the provost/dean's office had no visibility into what students really needed. In the age of fluid careers, they were relying on "historical analysis' to determine how to allocate their precious resources- instructors and classrooms. All this meant that if we could build a platform to personalize completion pathways, and share it with higher education administrators, everyone wins, especially students who are betting a lot on their college experiences." 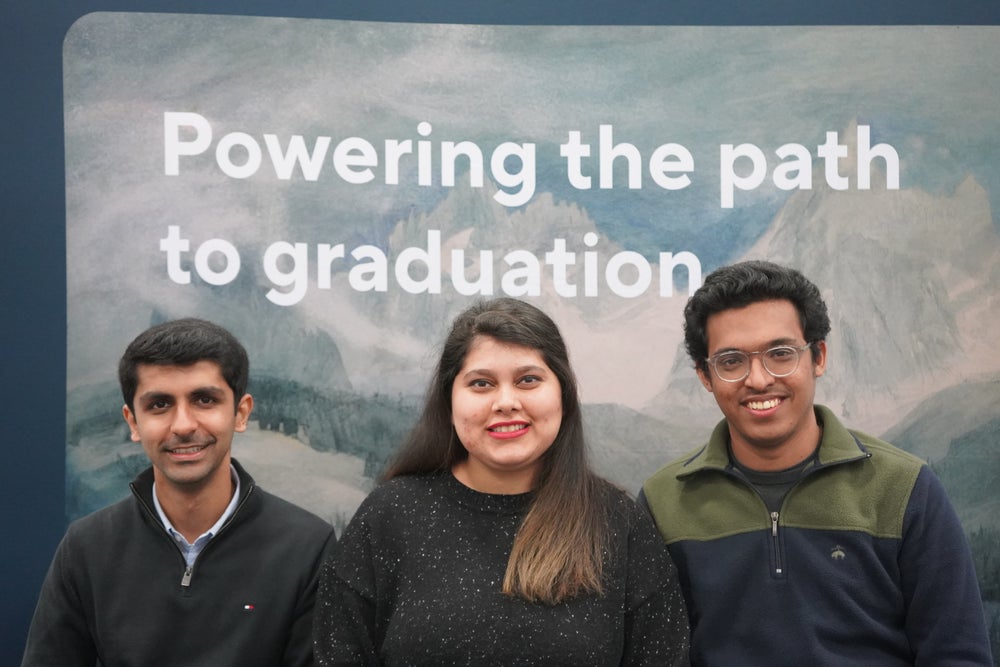 Invigorated with this purpose, in 2015, the trio participated in XLR8, Qatar Science & Technology Park (QSTP)'s flagship accelerator program that supports the commercialization of tech-based solutions. Over the course of the threemonth program, the team accessed training and mentorship opportunities, which enabled them to successfully launch their startup during the next phase of its development as part of QSTP's incubation program. With the intensive incubation program (and having just graduated from CMUQ), the Stellic team now had access to a financial grant, an incubation space, mentorship, and support to establish as a legal entity. In 2016, with the support of QSTP, the team was accepted into Silicon Valley's prestigious Alchemist Accelerator, which focuses on boosting the development of early-stage ventures.

This was a pivotal moment for the Stellic team, as they knew that becoming a part of the Alchemist Accelerator would allow them to build impactful relationships and expand their networks as well. And that's why, according to Bin Wasi, with less than $10,000 in their accounts, the team decided to break into the US market, with him describing what ensured as "an expected journey with many lessons learnt along the way."

"We initially built Stellic purely for ourselves- never thinking it would be a startup," he says. "Speaking to students from other institutions made it obvious that we should aspire to convert this little project into something more. Being fresh grads, we needed logistics support to continue working on the concept. QSTP [supported] us immensely in that regard. And then as we grew, it made sense to be in San Francisco- I was taking quite a few flights every month to meet universities, investors, and advisors."

Their leap of faith paid off- today, Stellic helps the higher education system by offering a unified softwareas- a-service (SaaS) B2B platform that lets students proactively manage their progress and collaborate with their advisors. According to Bin Wasi, the platform also helps institutions increase their operational efficiency by 10x, and automate resource allocation based on students needs and demands. "We develop partnerships directly with institutions, who then extend access to their licensed platform to their enrolled students and advisors," he explains. Even as a US-based enterprise, Bin Wasi notes that Stellic is still catering to the Qatar and MENA market, listing universities such as Carnegie Mellon University in Qatar and Northwestern University in Qatar, as well as a couple of undisclosed GCC-based institutes. "The beauty of Stellic is that it works in all higher ed institutions that have an elective-based curriculum," he adds.

The young startup is currently helping 300,000 students in the United States, Canada, Mexico, Pakistan, and Qatar, supporting more than 45 university and college partners including Columbia University, John Hopkins, University of Chicago and University of Oklahama. The advent of the COVID-19 hasn't deterred their traction either- in fact, it has only grown in the last two years, with students from more than 150 countries accessing Stellic. But it's not just the numbers that the team is pleased with- in a blog post on their company website, Bin Wasi noted that it's testimonials from their users that have been especially gratifying. For students, Stellic has been the "most valuable technology," which has helped them "confidently make decisions and graduate on time," whilst student advisors says that that it has allowed them to "supercharge their impact."

According to Bin Wasi, one of Stellic's culture values states: "Do good, and good things will follow." And that'd explain the traction the business has managed to attain in a relatively short period of time. "In five years, we've never lost a university partner, primarily because of the impact we've made on campuses," he notes. "Our Net Promoter Score is 80+, better than that of Apple and Amazon. Our revenues have grown exponentially. Just in the last 12 months, we've seen 4x growth, and we are projected to see even faster growth this year." In early March this year, Stellic was also awarded a grant from the Bill and Melinda Gates Foundation, wherein they are tasked to find new approaches to improve tech challenges and decrease obstacles for Black, Latino, and Indigenous students and advisors.

Given all of these achievements, it should come as no surprise that investors have taken notice of Stellic too- its $11 million funding round was led by Reach Capital, an impact fund focused on education. Reach Capital was joined by US-based ECMC Group, VC firm Impact Engine, and investment firm Operator Collective as new institutional investors. Rethink Education and QSTP from its last round also doubled their investment in this round. With the new funds, Reach Founding Partner Jennifer Carolan will join Stellic's board of directors. The team also made a strategic decision to invite selected leaders from the edtech industry as angel investors, a list that includes David Blake, co-founder and Executive Chairman of Degreed, John Katzman, CEO of Noodle, Dan Caroll, co- founder of Clever, Philip Cutler, CEO of Paper, Matt Pittinsky, founder of Blackboard and Parchment, Taggart Matthiesen, VP of Product at Lyft, and Maria Barrera, Senior Director of Growth at Nearpod. 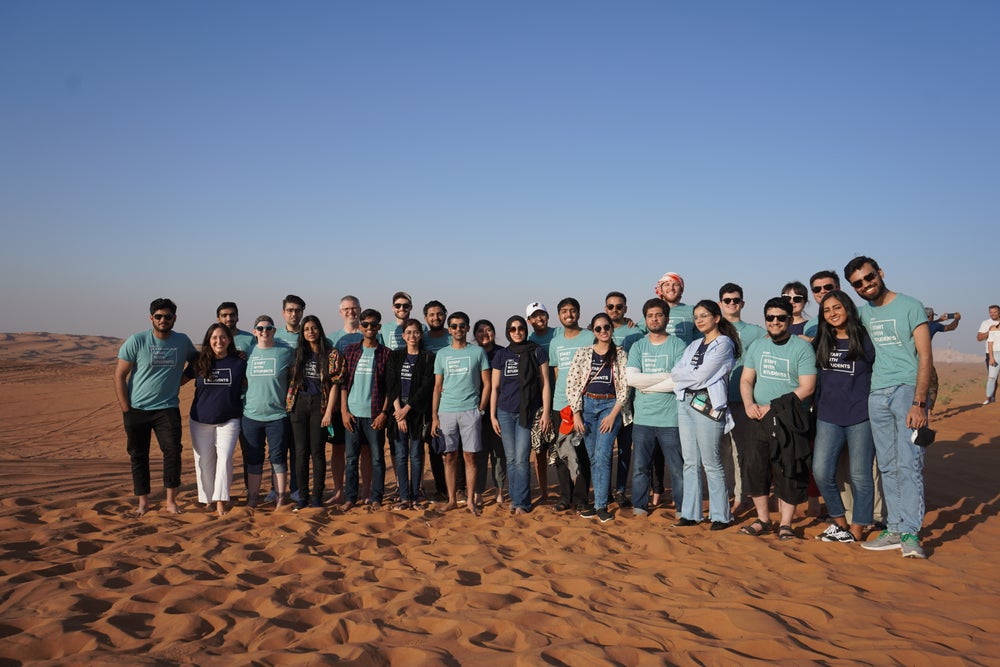 All of this has made Bin Wasi understandably excited about Stellic's next stage of growth. "We plan to invest in building a community of partners for each stakeholder- academic leadership, registrars, advising groups, and most importantly, students," he adds. "We hope that this community will yield greater collaboration and fostering of new ideas to advance higher ed (beyond just technology)." The company also plan to grow its base of university partners to include strategic partners, "particularly the institutions where we can make the deepest impact. As these partnerships grow, the platform will have to (intentionally) grow as well to further support our mission." Another effort the startup will delve into (and a project that the co-founders are really excited about) is opening up the platform to high school and transfer students, thereby offering another fragment of students help make better decisions.

Besides having the right combination of co-founders and investors, Bin Wasi believes that that the crucial factor that helped Stellic's growth trajectory was the team's conviction in their mission to help students succeed. "Given how difficult the startup journey is, it is critical to truly believe in the mission, and to keep going," he says. "If Stellic's co-founders weren't so committed to solving this problem, we would have given up a long time ago."

Looking toward the future, Bin Wasi says that Stellic's number one priority remains the same: solving higher education's biggest challenges by elevating the voice of students through modern tech. "For higher education to sustain its role as a liberator, we have to make sure that institutions adapt to the needs of today's students," he says. "And today's students have evolved- they have complex backgrounds (e.g. adult learners), diverse goals (e.g freelancers), and limited resources (e.g. full-time jobs). Higher ed must evolve to accommodate this diversity and complexity… And our role [as Stellic] is to support this journey with advanced, beautiful, student-centric technology."