AIM focuses on building a strong homegrown talent pool, as well as on producing content from the region targeted primarily towards the young adult audience

By Aalia Mehreen Ahmed May 27, 2022
Opinions expressed by Entrepreneur contributors are their own.
You're reading Entrepreneur Middle East, an international franchise of Entrepreneur Media.

This article was built in partnership with in5, an enabling platform for tech, media, and design startups.

The discourse that more female-centric films and shows need to be produced and supported is one that has long been lingering around the periphery of the global entertainment industry. It is a conversation that isn't unfamiliar in the MENA either, with the discussion often overlapping with the need for more locally created content. For Dubai-based production house All Is Media (AIM), these issues form the crux of its vision.

"AIM focuses on building a strong homegrown talent pool, as well as on producing content from the region targeted primarily towards the young adult audience," says Mai El Khalifa, founder and CEO of AIM. "The company was founded to create original, ambitious, imaginative, and relevant movies and television shows for streaming platforms and regional free-to-air (FTA) broadcasters in the MENA region. Having said that, our unique selling point is women being able to tell homegrown stories for other women, and we do this by accessing a pool of new and upcoming writers from the region."

Launched in 2021, AIM's endeavors come at a point in time when entertainment consumption in the MENA region continues to see new trends. A recent PwC study shows that over-the-top (OTT) streaming platforms such as Netflix, Shahid, and Starzplay Arabia have added more local content over the past two years- a shift that is expected to result in a 12.3% compound annual growth rate in the region's OTT video revenue by 2024. Another study by Dataxis shows that the total number of subscribers to such platforms is expected to reach 30 million by 2026. 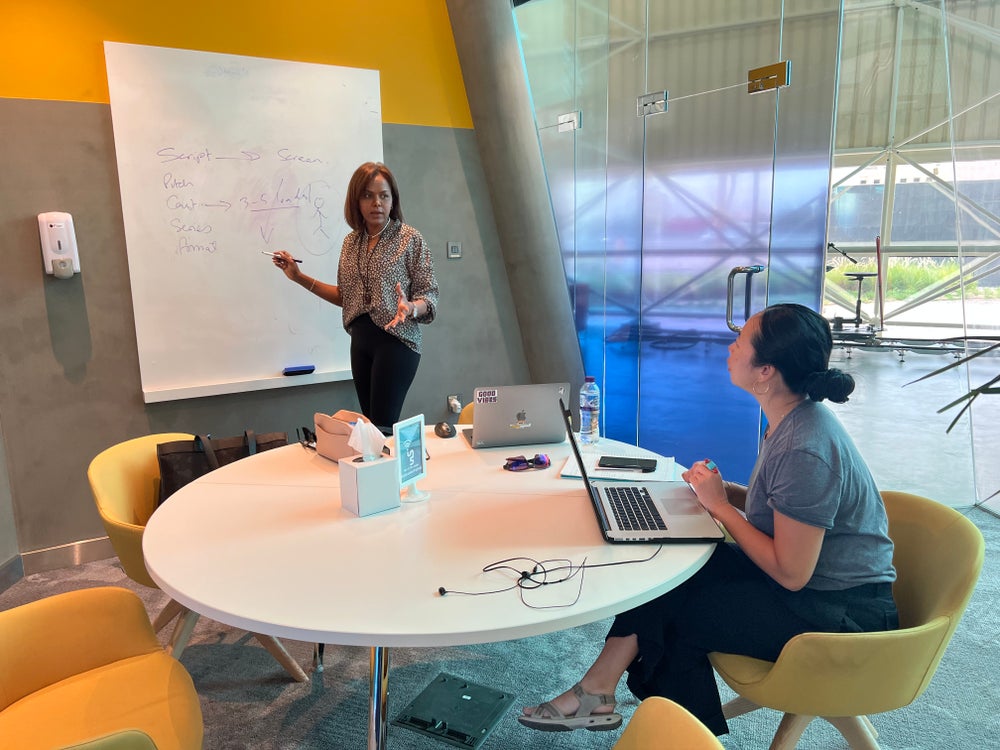 Source: All Is Media

With this clear demand for more content in sight, the AIM team has set out to address the dearth of locally produced stories. Along with producing scripted and unscripted television series, shows, events, and specials, the firm also offers content distribution as well as studio consultancy. "AIM has already produced two unscripted shows for an FTA broadcaster, just a few months after the company was set up," El Khalifa says. "The business has also offered numerous consultancies for broadcasters on grid optimization and production." And that's not all- there are other projects in the offing too. "I already have other drama series from the region that encompass stories with strong female leads in the pipeline," El Khalifa reveals. "Our industry is booming, as it is at the cusp of finally giving producers an increasing number of streaming platforms, so they can pitch their content and see it reach the masses with reliable data to analyze performance."

But El Khalifa's vision goes beyond just the storytelling aspect of it all. For her, creating a sustainable way of filming has been an equally important part of creating AIM. "A key target for AIM is to establish an eco-friendly production environment with a positive impact on the bottom line, with sustainable business practices taking centerstage," she explains. "For example, the use of LED and green screens to replace the use of physical props to help reduce material waste."

Source: All Is Media

As the woman at the helm of the business, El Khalifa brings over a decade's worth of experience in television to her enterprise. Among her noteworthy accomplishments include a senior editor role for outsourced content for UAE television channels Dubai TV and Dubai One. Keeping that in mind, El Khalifa believes AIM to be a seamless blend of all her past experiences, as well as her personal goals as a content creator. "The most gratifying part of launching AIM has been to finally work towards what I have always dreamt of– bringing stories that relate, resonate, and create a strong and positive impact," she adds.

It's clear that El Khalifa has ambitious goals for her business, and she's glad to have in5 on her side as she works to realize her dreams. "When I started looking at options to set up my business, I wanted to find an entity that can offer a sense of community and understand the financial limitations that come with startups," El Khalifa says. "At in5, these concerns were addressed, and added to that is the fact that the facilities provided at competitive rates for production are attractive too!"

Related: KSA-Based Taffi Aims To Become The MENA's Leading Personalized Styling Services Provider After Raising Over US$2 Million In A Seed Round