As the sales of electric scooters grew multifold, major issues with them also came blasting forward. Multiple incidences of fire breakouts from electric scooters have raised the consumer speculation on the viability of EVs as an alternative to petrol vehicles. We try to understand what's behind the issue and how can companies go about changing them

By Akshit Pushkarna June 7, 2022
Opinions expressed by Entrepreneur contributors are their own.
You're reading Entrepreneur India, an international franchise of Entrepreneur Media.

The rise in the number of electric vehicle sales is a testament to the fact that a change is afoot in the Indian automobile industry. Although electric vehicles, two-wheelers in particular, have had a presence on the Indian roads for quite a while, the numbers have steadily increased in the past couple of years. For 2021-22, the sales of high speed (HS) electric two-wheelers (vehicles with speeds over 25 kmph) went up by a year-on-year increase of 47 percent. Such a quick increase in sales was observed not only with two wheelers but three and four-wheel vehicles as well. However, those vehicles have not become a topic of controversy off late.

Since March, news reports of electric scooters catching fire or exploding started becoming more and more frequent. There have been multiple deaths reported in the past few months caused by fire incidences from EVs. The issue started heating up. Leading players in the industry like Ola electric, Ather, Okinawa, among others, started recalling their vehicles back from distribution for thorough inspections of the faults in the vehicles, after Nitin Gadkari, Union Minister, Road Transportation, advised them to do so. A government committee was appointed to investigate the issue thoroughly. The experts found defects in battery cells and battery design in nearly all EV fires. Entrepreneur India did reach out to the aforementioned companies to understand the challenges that they were facing, but they declined to comment. 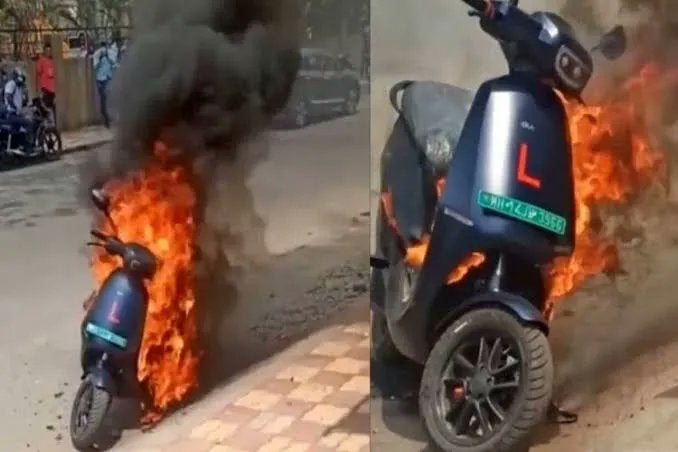 An OIa e-scooter in flames

The match to the flame

"While the real reason behind the fire outbreaks is yet to be ascertained, there are primarily 3 reasons for such incidents. First is the quality of cells. Sub-standard cells will always be vulnerable to failures and to catching fire. The second is the design of the battery pack. Battery packs are often not designed and engineered well in terms of their cell packaging, thermal management, and how they handle the vibrations on account of Indian road conditions. Many of them are imported from China and other countries and are not designed for Indian conditions. The third is the Battery Management System (BMS), which controls key parameters that can cause fires due to overcharging," a spokesperson from Ather energy shares with Entrepreneur India.

Dinkar Agrawal, Co-founder and COO, Oben Electric, says the issue is rooted in the import of foreign designs and vehicles into India. Agrawal shares that in India, few companies are designing and assembling their vehicles according to Indian conditions. These scooters with foreign makes might not be suitable for Indian conditions. "Vehicles who do not align with Indian climatic conditions often face difficulties. The height, weight and driving behaviour are also different for the Indian driver than the drivers from the countries from which these technologies have been imported. For example, we often see people driving with 2 passengers on a bumpy road. Those factors are often not considered when importing vehicles from outside India. If you bring a vehicle made for the geographical and user conditions of other countries, issues are bound to arise. I believe there are only two-three players that are actually making vehicles for the Indian markets as per Indian standards," Agrawal highlights.

This leads to the question that whether or not were the EVs pushed into the market seeing the explosive surge in demand. Well, maybe. Dr Praveen Kumar, Professor, Department of Electronics and Electrical Engineering, IIT Guwahati, who is the lead researcher for the electric mobility laboratory of IIT Guwahati, believes so. "Maybe safety was overlooked. Proper development of such complex technology that is utilised by EVs does take time. So maybe the scooters were pushed without the utmost care about the safety aspects. It is a possibility," he said.

The researchers of the Electric Mobility Laboratory of IIT Guwahati led by Dr Praveen Kumar focused on Indian climatic conditions for both rural and urban areas and developed a method that rates the motors and batteries of electric vehicles and suggests to Original Equipment Manufacturers (OEM) the best drivetrain components for the Indian scenario.

"For rectification of the issues, we need better battery management systems (BMS). These systems need to sense the health of the battery more accurately. We need to think about developing a battery pack for a tropical climate which would require the manufacturer to give greater attention to the cooling aspect of the batteries. The likelihood of these scooters which had thermal getaways having good cooling systems would have been really low," he explains.

The professor details that, for the development of a better thermal management system for the battery, cell testing has to be done quite extensively. Random testing of cells should be done to ensure that the supply chain is in order. The deviation between the cells is huge in a batch. This would require thermal sensors at various points of the battery.

The incidences of technical faults have been but a significant bump in the progression of people's transition from their conventional petrol vehicles. "I believe the cases have pushed us a little back. Over the past two months, I estimate about 75-80 per cent of potential customers who reach out to us ask whether the scooter will blast or not. To impart the customer relevant information about the proper way to charge batteries has thus become really important," Raj Mehta, CEO and Founder, Greta Electric Scooters, told Entrepreneur India.

To overcome this new apprehension of the customer, Mehta said that the company has been offering a rather general insurance. "We have an insurance system in place that shows our confidence in our products. The comprehensive liability insurance policy that we have compensates the user about 200 times the vehicle cost in case of an incident. Due to our meticulous approach to picking the best batteries for our vehicles, no such incidents have been reported as of now," he shared.

While many companies have been facing issues with the products that they have pushed in the market seeing the increased demand, leading to unfortunate losses to life, Ather, which is one of the largest players in the sector, has seen no such reported incidences at the minute. The company believes that its diligence in research and development paid off.

"We design for India by ensuring that the vehicle is tested in the most extreme conditions and believe that the quality benchmark as an OEM needs to be considerably higher than the suggested compliance benchmark. Although we had a product in 2018, we started taking it PAN India only in 2021 because we wanted to give it a few years of constant on-road testing and didn't rush into the market. At Ather, we built battery packs for 5 years before moving to production," a company spokesperson said. They further add that internal test standards ideally should be much more stringent. "A clear understanding of all these factors is essential, especially for the Indian environment and therefore, comprehensive and rigorous on-road durability testing for a longer duration is a must," they comment.

The Government is taking action to rectify the situation at the moment. The Delhi High Court recently issued notice to the Centre and the Delhi government seeking reliable and long-lasting batteries in the vehicles by the manufacturers in a way to avoid overheating and fire accidents.

Gadkari has also confirmed that the government will soon issue quality-centric guidelines for electric vehicles.

"The battery regulations are evolving worldwide. As the vehicles themselves are developing, the governments and bodies are learning what could be the issues and hence are planning protocols and observations based on those observations. It is a continuous process and it's good that it is happening in our country as well," Professor Kumar observed.