Meta is the leader in the rapidly growing market for VR headsets. The total AR/VR headsets shipped in 2021 were an increase of 92.1% over previous year, according to data from research firm International Data Corporation (IDC)

By Priya Kapoor July 12, 2022
Opinions expressed by Entrepreneur contributors are their own.
You're reading Entrepreneur India, an international franchise of Entrepreneur Media.

In May 2022, Meta (formerly Facebook) opened its first hardware store in California to give its consumers a first-hand experience of its hardware products such as virtual reality headsets and augmented reality goggles and glasses. With this, the company set the wheel in motion for metaverse-the next evolution of the Internet.

Meta is the leader in the rapidly growing market for VR headsets. In 2021, Quest 2, Meta's flagship VR headset, constituted 78% (8.7 million units) of total headsets (11.2 million units). It was followed by DPVR and ByteDance's Pico. While DPVR captured 5.1% share globally, Pico secured the third rank with 4.5% share of the market.

The total AR/VR headsets shipped in 2021 were an increase of 92.1% over previous year, according to data from research from International Data Corporation (IDC). This indicated the growing acceptance of virtual and augmented reality products among consumers. In 2022, this is expected to touch 16.49 million units. And four years down line, it is expected to cross over 50 million units. 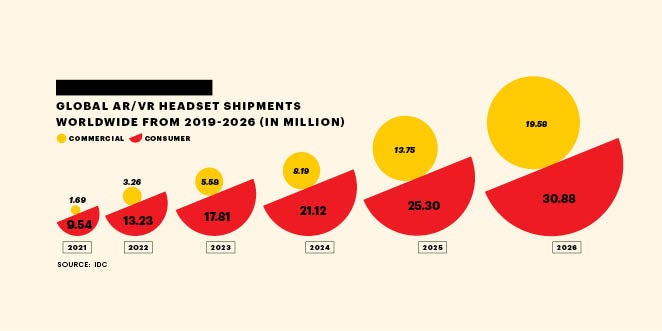 AR/VR devices play an important part in accessing the world of metaverse. Enabled by Web 3, the metaverse is an amalgamation of virtual and augmented reality. According to a new report titled "The Corporate Hitchhiker's Guide to the Metaverse" from Boston Consulting Group, the total metaverse market is expected to reach $250 billion to $400 billion market by 2025. No doubt, if metaverse has to see good growth, the usage of AR/VR devices also has to go up.

Says Sly Lee, Co-CEO and Co-founder, Emerge, a US-based VR hardware startup "With each new era of human-computer interaction has come new hardware, in both consumer and enterprise sectors. Just as the current version of mobile computing was enabled by smartphones, the next era called the metaverse will be enabled by new types of hardware that enable a deeper sense of presence. Until that point, the true potential of the metaverse will be limited."

Concurs Abhijit Patil, Co-founder and COO, AjnaLens, a Thane-based Extended reality startup, which has secured a total of $4.5 million in funding till date, with latest being Pre series A funding. "As we need computers, laptops to access the internet, similarly we need other hardwares like AR/VR glasses to access the next set of internet. In fact, AR/VR glasses and other hardware is set to be a bigger industry than mobile phones in the future."

Companies like Meta ( Formerly Facebook) Sony, HTC and Samsung offer VR devices, while the AR market is mainly dominated by the likes of Apple, Microsoft, Google and Magic Leap. 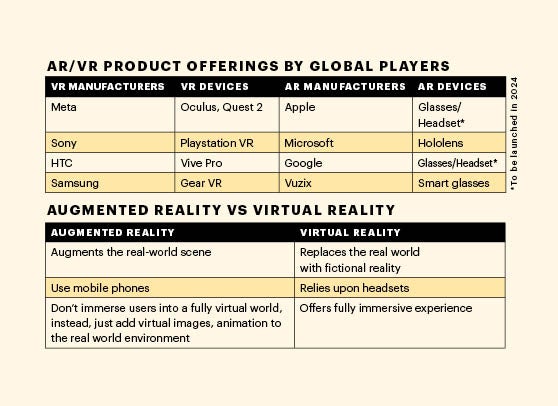 There are more product offerings lined up in the future. In the pipeline are Apple's AR glasses. They will be launched in late 2024 alongside the second 2nd Gen AR/VR headset. Google is coming up with its AR headsets. To be released in 2024, they will be powered by a custom Google processor, which is like its newest Google Pixel smartphone.

AR/VR devices to experience metaverse are increasingly embraced by sectors ranging from manufacturing to designing to healthcare to education. Last December, Boeing announced that it will design its next-generation aircraft within the metaverse, using Microsoft HoloLens, along with something called "digital twin" technology.

Big opportunity, but is India ready?

According to technology research firm Gartner, 25% of people will spend at least one hour a day in the metaverse for work, shopping, education, social and/or entertainment by 2026. This offers a huge opportunity for India to venture into the hardware space needed for experiencing the world of metaverse.

However, the Indian scenario doesn't paint a very rosy picture when it comes to metaverse hardware. Couple of India companies namely Irusu and Procus offer VR headsets and glasses at different price points.

So, what's the reason behind the low interest of Indian manufacturers in the industry that offers a billion dollar opportunity? "The risk appetite in India is still less. Only startups can take such a risk compared to traditional businesses. Moreover, the awareness of AR/VR and glasses is still low, and India has always followed the proven story. That's why we are seeing only startups in this space. Once the awareness about these applications will increase, players will jump in," adds Patil.

Says Lee, "Hardware is hard" as the classic saying goes, is true. But the potential upside is exponentially higher than software endeavors, and this brings considerably more risk and limitations as you are dealing with atoms, not bits- which move slower when in the development phase. However if you can create a successful hardware paradigm, you can have a tremendous impact in the market. Startups and companies already know this, which is why you see companies like Meta, who previously just had social apps, invest billions of dollars in the hardware space."

India needs the right support and ecosystem to grow in this space, "There are two paths to having an impact in the space: manufacturing of goods and invention of new hardware goods. India obviously has the potential to both, but the right circumstances and support to foster an ecosystem will be key. A lot of our team here at Emerge is originally from India. So we know India has the talent, and soon it will hopefully have the resources," adds Lee.

The metaverse hardware scene today can easily be compared with the mobile phone industry in the 90s. "It's early but not too early. Only giants are putting their legs because they can see the vision, they are the visionaries. In the next five years, a full-fledged ecosystem will develop and most of the tech savvy people like us will replace our laptops and mobile phones with AR glasses. But the sector is seeing interest and some giants from India are putting their legs and we are being approached to partner and take this technology ahead," says Patil.

Companies like Emerge plans to foray into the Indian market. "Our vision to connect people's emotions over distance and time resonates even more with loved ones that live very far apart. In fact, 70% of our company has immigrants or 1st Gen Americans and we all have family and friends far away. We will inevitably enter the Indian market, and are trying to expand internationally as fast as possible," informs Lee.

But how are companies dealing with the issue of exorbitant prices of AR/VR headsets currently on offer by global giants? AjnaLens tells Entrepreneur India that it has a subscription model in plan for enterprises. "Our next MR all-in-one glasses will be launched at the prices of mobile phones. We already see that there are hardly any computer or phone manufacturers in India. We do not want to lose this race. We are the only startup that has manufacturing in India, and are bringing the products at half of the prices of the competition. If you want to take this technology to India or consumers, you need to reduce the prices and profit margin."

Will 5G bring in more players?

Experts closely tracking the market feel that more players will jump in with full adoption of 5G in the country. "Digital adoption is still low in India and 5G is far away. High speed connectivity is a must for a good immersive experience. I think more players will start venturing after 6-7 months of full 5G adoption in India. When overall connectivity goes up, we can see metaverse going up too," says Prashant Garg, Partner, Tech Consulting, EY India.

Going forward, the metaverse will see technologies beyond headsets and glasses. There will be new sensing hardware, a technology that will try and understand what your real physical body is doing and even what you are thinking to try and make sense of it and utilize it to do things in the metaverse. 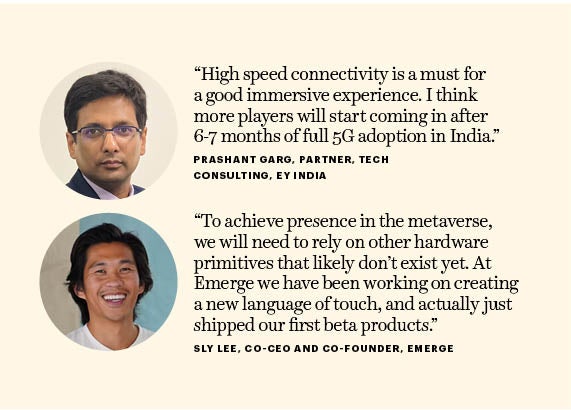 "Hardwares like AR/VR headsets cannot hold back the metaverse as it is much wider. With haptic gloves already there, the next set of hardware we can expect are haptic sensors," adds Garg.

Says Lee, "The concept of the metaverse is quite grandiose. However, an obvious insight is that we need new interfaces to interact with it, similar to how we have our senses to interact with our current world. Similarly, to achieve presence in the metaverse, we will need to rely on other hardware primitives that likely don't exist yet. At Emerge we have been working on creating a new language of touch, and actually just shipped our first beta products."

"Personally I believe we won't achieve smell or taste in a linear fashion because of the friction required and other potential paths. Lastly, there must be an improvement in computational hardware. There are zettabytes (one trillion gigabytes) of data in the world. Our eyes and brains render everything at very high levels. It is very difficult for our current technology to match up with this, but it is inevitable," explains Lee.