Huspy, a UAE-based proptech startup, has raised US$37 million in a round led by venture capital firm Sequoia Capital India.

By Pamella de Leon July 13, 2022
Opinions expressed by Entrepreneur contributors are their own.
You're reading Entrepreneur Middle East, an international franchise of Entrepreneur Media.

Launched in 2020 by Jad Antoun and Khalid Ashmawy, the duo launched Huspy after noticing how property transactions in the Middle East are often fragmented. "The entire experience can be very cold, challenging, and exhausting," CEO Antoun says. "As a result, people just want to get the process over with, so they end up overpaying for mortgages, or worse, not closing the house they want." It is thus to address this issue that Antoun and his team developed Huspy to digitally transform and ease the home buying experience.

According to Antoun, the team were able to validate their model fairly quickly. "We partnered with leading banks and empowered every stakeholder in the transaction with our technology, including agents and brokers, and improved the experience for homebuyers by closing transactions three times faster than traditional methods," he says. In fact, the company states that it has reached $2 billion in annualized Gross Merchandise Value (GMV) over just two years, growing at 25% month-on-month to become one of the largest housing platforms in the UAE.

Connecting potential property buyers, banks and private lending companies, the platform matches mortgage plans to users' needs, obtains pre-approvals from banks, and helps close deals. It has also announced the launch of its full-service property marketplace as an added value offering, complementing its position in the home finance segment. With its new funds, Huspy plans on "doubling down" its presence in the UAE and Spain, as well as additional countries in Europe, whilst hiring extensively across all teams and improving its core technology. "Our technology is built to scale across markets, but we also want to continue to raise the bar on the experience we deliver," Antoun says. 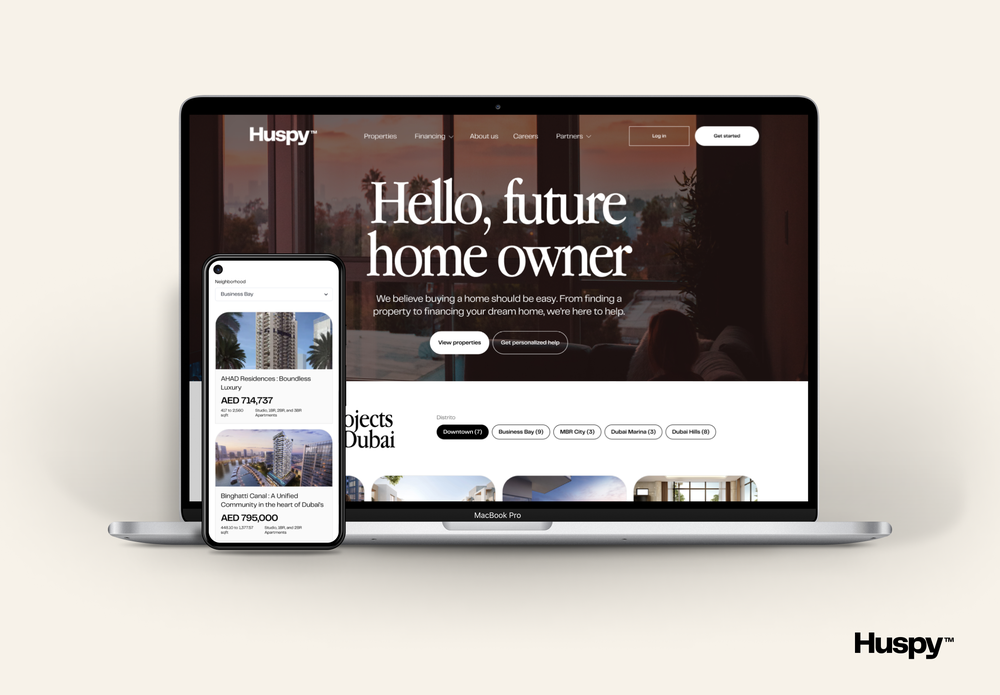 Speaking about the investment round, Antoun notes that he and his team sought to partner with investors that aligned with their ambitions and values to propel growth exponentially. "Partnering with Sequoia is a dream for many founders, including me," saya Antoun, who also notes that the company also welcomed previous regional investors. "Founders Fund and real-estate focused Fifth Wall both chose this round to make their regional debut, a privilege that we feel responsible for."

Antoun and the team also note that the round is a sign of confidence investors have in Huspy and their business fundamentals. "As a MENA startup expanding to Europe, we want to inspire the entire ecosystem to unlock their global potential," says Antoun. "The regional startup landscape has evolved significantly over the past few years and opportunities will continue to grow." That said, Antoun claims they didn't set to secure this particular size of the round. "In fact, we were significantly oversubscribed, and some money was left on the table," he reveals. "A privilege we acknowledge and a deliberate move we made in order to not be distracted by valuations. Instead, our focus remains on creating value and solving real problems in the property industry."

Looking ahead, the team is focusing on growth in the UAE and Spain, while in the long term, they are also looking to expand further across the EMEA region and entering new markets in the next 12 months. "We want to build Huspy into a category-defining business, changing how people buy and finance their homes," says Antoun. "As we shape the future of home buying, we are raising the bar for the proptech ecosystem, while making it easier for people to invest in the world's largest asset class. By bringing together world-class talent and technology to create great experiences, we're already making a difference."

1. It's all about the people "As a founder, it is sometimes easiest to take support from whoever is willing to provide it. However, this can be detrimental. That is why entrepreneurs need to be very picky, whether it's with their initial hires or leadership. At Huspy, even though we are a young company, we have attracted a world-class team of startup veterans from the likes of Loft, QuintoAndar, Uber, Loggi, SumUp, etc. located across Dubai and Madrid. This has played an important role in attracting investors. It also helps if they are genuinely good people."

2. If you want to be VC-backed, solve for very large problems "As a founder it's not enough to have a great idea. You need to define your market. The larger the problem you solve, the greater the returns. Metrics such as total addressable market (TAM) and serviceable available market (SAM), clearly outline the opportunity for your business. Having visibility of this data gives VCs confidence in the viability of your idea and potential returns for them."

3. Have product market fit before taking huge investments "In the early stages of a startup, founders have room for experimentation. As you progress to larger investment rounds, you must ensure there's a definite market for your product. Being over capitalized can destroy a company. So, make sure that the problem you're solving for is meaningful, and your product is the optimum solution for that problem. In the absence of product market fit, you risk running out of money very quickly, and could be forced to shut down. The sooner you can achieve product market fit, the better you'll be positioned to build a strong business."

Related: "We Got Funded!" UAE-Based Cartlow Raises US$18 Million Series A Round With The Aim To Dominate The MENA Region's Recommerce Ecosystem