"We want to be a voice for all... an inclusive platform where celebrities and people of determination come together as one and are seen as equals."

If one were to attempt to pinpoint the moment when Dubai-based inclusive talent agency and disability inclusion consultancy Touch started to come into being, most of us would probably determine it to have happened in June 2020, which was when co-founders Jean Winter and Jessica Smith got to connect with each other for the first time.

This was during the onset of the COVID-19 crisis, and Winter, an entrepreneur and investor with a business portfolio spread across the world, had posted on the Female Fusion Network UAE page on Facebook offering to be an angel investor for female-founded endeavors that needed a boost during that particularly difficult period. Nearly 100 women responded to Winter's post, one of whom was Smith, an Australian Paralympic swimmer who had gone on to become an internationally renowned inspirational speaker on topics like diversity, inclusivity, and equality.

Smith reached out to Winter in the hopes that she'd be a sponsor for Just Jessica, a children's book series she had authored built upon her own experiences as a young girl growing up with a disability. "It struck a chord with me that she had approached several individuals and corporates for sponsorship, but to no avail," Winter recalls. "That was the beginning of our journey." But while this instant was when these two women started to work together on Touch, it doesn't actually mark the birth of the concept- Winter admits to me that she had actually been ruminating on the idea for a long while before that. "I've had the idea of starting a company called Touch for three or four years, with the tagline 'touching lives, inspiring people,' without an idea of what kind of business it would be," Winter reveals. "When I decided to sponsor Jess' books, I decided that was going to be the start of Touch. We were seated at Tom and Serg [a café in Dubai], and it was over coffee that I told Jessica that we will get her books published, and that she will run the company. I did not want to help her alone, but help a wider community through Touch." 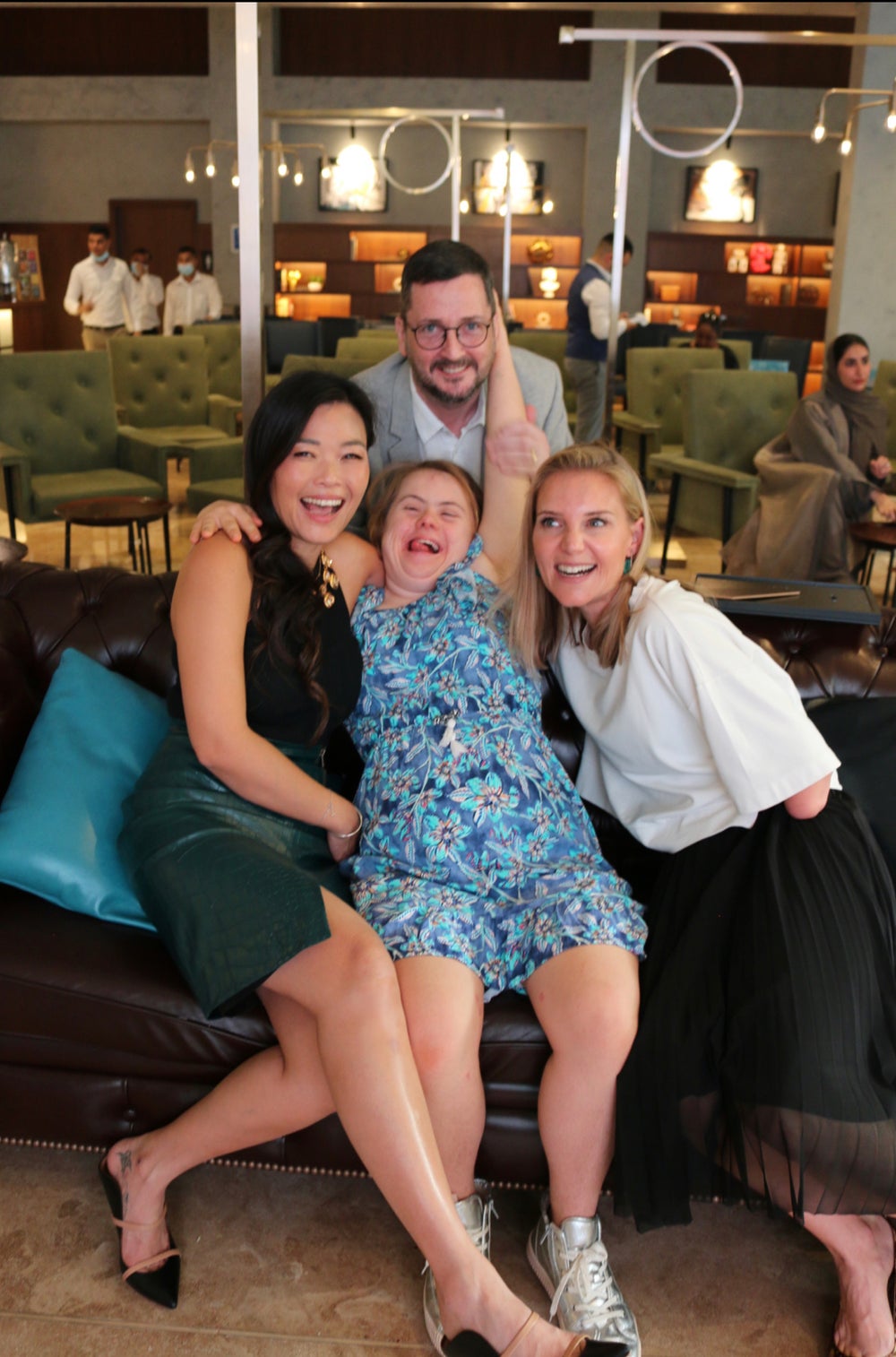 Having thus set themselves up as the co-founders of Touch (which officially came into being about 10 months ago), Winter and Smith -in their roles as CEO and COO, respectively- are today working on an enterprise that is "pushing for an inclusive paradigm shift" in the world that we currently live in. It's a mandate that is especially close to Smith's heart, and it's also one that she has personal experience with. "I co-founded Touch because as a woman living with a disability, I know what it is like to face ridicule and discrimination, and yet, I am also aware that as a white Australian, many of my challenges in life would be seen as luxuries to thousands of women around the world who also identify as disabled," Smith explains. "Therefore, I have a responsibility to do what I can to generate change. I have forged a career for myself due to hard work; however, that hard work has also been achievable due to opportunities that others simply are not afforded. I created Touch, because I am determined to leave a legacy."

Smith's values clearly underscore Touch's vision to represent "diverse talent across all industries," and this can be especially seen in the business' dedicated focus on having people of determination (PoD) becoming a more integral part of the business world at large. "More than 15% of the global population live with a disability," Smith points out. "Many of those disabilities cannot be seen, and therefore, we don't know when we are engaging with someone with a disability, and what their needs or requirements might be. As a result, there is between US$8 to 13 trillion dollars of untapped market, because organizations don't have a disability strategy. Disability inclusion is good for business, but it's also the right thing to do." 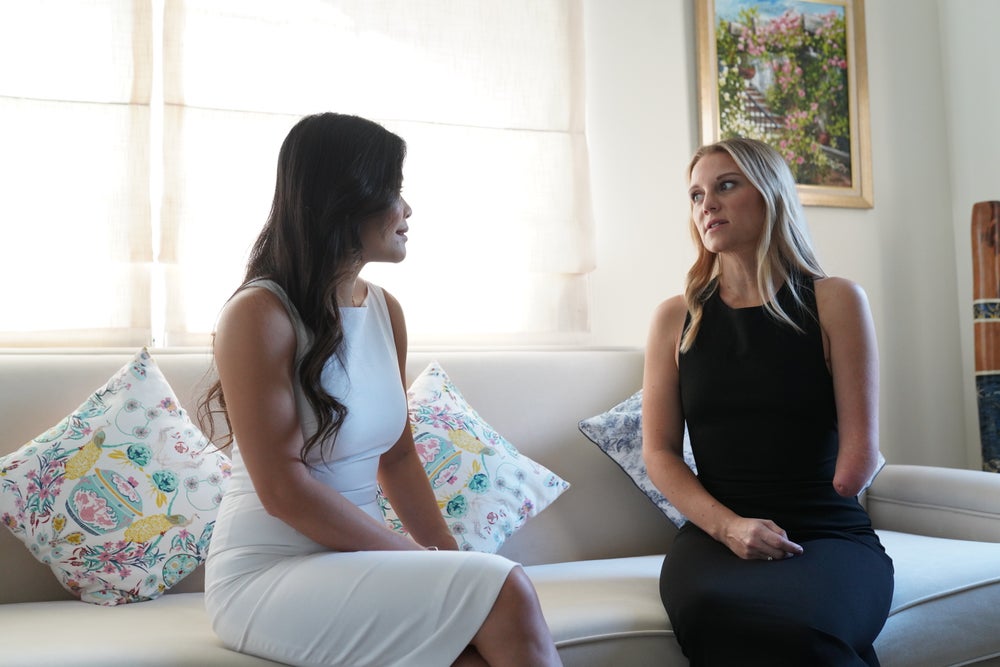 Such a mindset also explains how Touch's business model has been structured, particularly in its talent agency arm. "We want to be a voice for all," Winter declares. "I wanted an inclusive platform where celebrities and PoD come together as one and are seen as equals." With its portfolio currently comprising of talent mainly from the athletic and F&B fields, Touch's talent catalog has celebrated figures in these realms (which includes the Michelin-starred Thomas Buhner, one of Germany's top chefs, as well as Tima Deryan, the first Lebanese woman to scale Mount Everest) share top billing with PoD who have outstanding stories of their own, like, say, Alina Siddiqi, the Dubai-born Special Olympics gold medalist in the sport of artistic gymnastics, or Haikal Johari, the Executive Chef at Alma by Juan Amador in Singapore. "My talents get 80% of the negotiated fees, and Touch keeps 20%, which makes us also very different from many agencies around the world," Winter says. "Clients know where their money is going to, in terms of which talents they choose to support."

Meanwhile, Touch's consultancy arm is what its co-founders believe to be the company's key revenue stream. "At Touch, we work with our clients to shape impactful cultural change, supporting the development of inclusive products and services, or increasing community engagement with a greater customer base," Smith explains. "We offer consulting, disability inclusion workshops, access audits, digital audits, and inclusion action plans. Besides partners like Sanad Village, Crossfit Alioth, and Sumba Hospitality Foundation, our recent clients include Mars, Deloitte, Expo 2020 Dubai, just to name a few."

Related: Against All Odds: Australian Entrepreneur Pauline Nguyen On What It Means To Combine Spirituality And Entrepreneurship 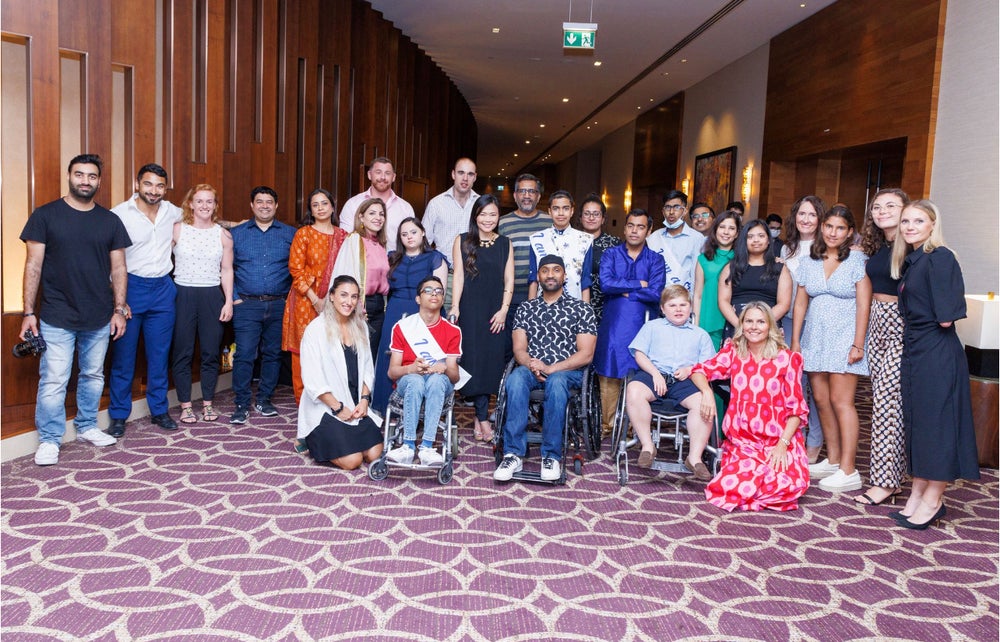 A scene from an event staged by Touch. Source: Touch

And in the midst of doing all this, Touch is also striving to provide supportive mentorship for PoD wanting to build rewarding careers for themselves- an example of such an effort was seen in June when it partnered with Dubai Festivals and Retail Establishment (an agency of the Dubai government's Department of Economy and Tourism) and hospitality giant Hilton to get acclaimed Dubai-based chefs like Gregoire Berger, Reif Othman, Troy Payne, Himanshu Saini, James Knight Pacheco, Matthijs Stinnissen, Domenico Santagada, and Francesco Guarracino to share their insights and expertise with PoD wanting to work in the F&B industry. "The milestones that these kids have achieved through our mentoring sessions have been astounding," Winter says. "Many started non-verbal, insecure… They are now confident and have friends they call their own."

Meanwhile, Touch is also spreading its outreach efforts to those hailing from less privileged backgrounds around the world- Winter traveled in June to the island of Sumba in Indonesia to bring to life a partnership she had engineered with the Sumba Hospitality Foundation, which works to break the poverty chain of some of the poorest families in the country by equipping their youth with the skills they need to create employment opportunities for themselves. Having worked with acclaimed chef (and Touch talent/mentor) Colin Clague to empower young Sumbanese talent for the first edition of this initiative, Winter is now hoping to do more instalments of this two-week exercise multiple times over a year.

Now, if there's one thing that is evidently clear from all of what Touch has done so far, it is that the cofounders are extremely serious about propelling the values of diversity and inclusion in the world that we live in today. "We are going to change the world with kindness," Winter declares. "At Touch, we want to show the world that everyone deserves to have their voice heard, and we want to help make that happen. Inclusion does not only refer to hiring PoD; inclusion is multifaceted- from allowing more women to take on management positions in the industry, hiring more PoD, helping to break the poverty chain, creating more accessible and welcoming spaces for all, to learning to be kinder and more empathetic in general. We as a community have to do much better. It must no longer be about making certain policies just to tick some boxes, but to carry out well-thought-out sustainable practices aimed at positive change. We can be more inclusive than we already are, and we must."

Smith agrees with this sentiment, saying, "Most businesses these days understand that inclusion is good for business, and yet, we are still fighting for true equality. So, it's time to move beyond the economic case, and remind ourselves that doing the right thing not only benefits us as individuals, but also as a collective. If we are kinder and more empathetic, this will absolutely benefit every decision we make, both personally and professionally." }There is a clear synergy between Winter and Smith as they work on realizing Touch's mission to create a more inclusive society, with both women claiming to have zero regrets about the ways their respective entrepreneurial journeys have panned out so far. "I think most women would say that they wished they'd believed in themselves more at various times, and I am no different," Smith admits. "Motherhood certainly had an impact on my self-esteem for many years. I was terrified that after having children I'd never be able to create a business, because society simply makes it so hard. But thanks to the right support, and the right mentors, for example, Jean, I now know that all my past experiences have been leading me to this moment, to prepare me for this new business… So, no, I wouldn't change any of it." 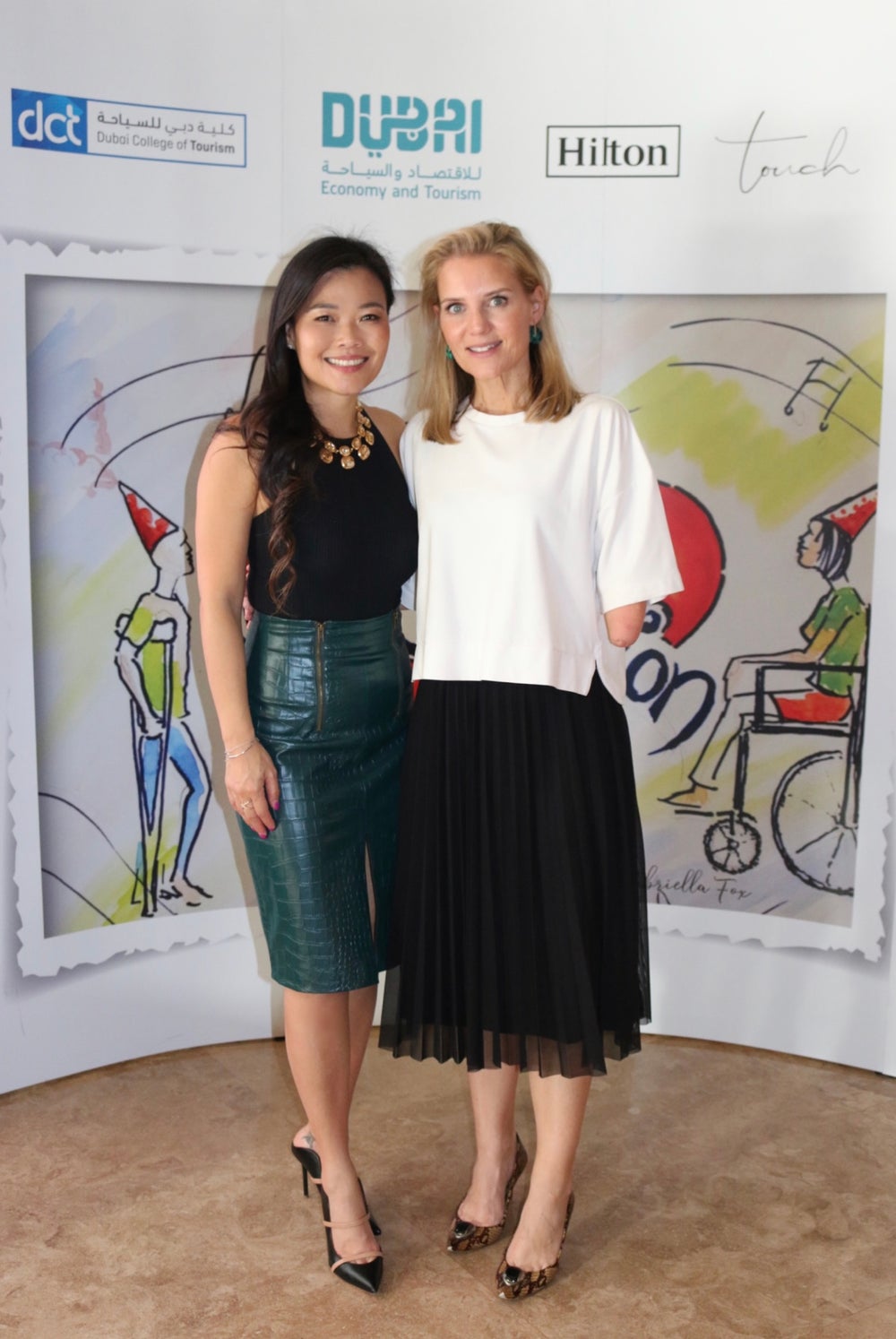 Similarly, Winter, who has a history of building niche businesses, says that the joy she gets pursuing goals that are off the beaten track outweigh all of the hurdles along the way. "I never found my journey hard, because I create my own rules," Winter says. "I choose to use the term 'exciting,' because every choice you make determines your own future. I make my own journey easier by choosing the right people to work with along the way, be it vendors, suppliers, agencies, or talents. You are who you surround yourself with! Your businesses also reflect you. So many of my projects and businesses started out of other people's needs more than my own- I just happened to fill in the gaps."

Plus, Winter adds, there is a certain delight in proving people wrong. "I love taking on projects that I see value in that nobody else does," she says, with a glint in her eye. "Touch pretty much started with me supporting a project no one else saw a value in at that time, right? See where we are now!"

Be brave (but not unrealistic) "Make sure you have a clear business plan and workable strategies that are not based on probabilities." }

Create a business with a difference "Because then, there is no competition. And even if competition grows, you will always be remembered as the pioneer."

Remain humble "Don't ever forget how and where you started. Stay true to your ethos, and the business will flourish in God's grace."

Do your research "Learn from whoever else you can learn from, ask questions to those you know that have taken a similar path- connect and network."

Set your goals, and take action "Business is never linear, but you must take action; otherwise you will always sit and wonder, 'What if?' You can always change your mind, and you will learn as you expand and grow– these are the exciting aspects to business, the unknown."

Carpe diem and seize the day "Choose to see opportunity where others see challenges."